rangerovers.pub
The only place for a coil spring is up Zebedee's arse.
Electrical fire

Had a bit of bother the other day, black smoke coming out of from under bonnet, turned out to be the klaxon for the alarm, next to the battery box under the fuse box, 2001 4.6 thor, in case they are different.
Turns out there are rechargeable batteries in it , so worth a check.

Most UK spec cars will have had the battery backed sounder.

I recommend getting rid of them at this point - as by now the batteries will either have failed entirely, or be failing. And in the worst case, as you've found out - overheat and cause a fire.

I replaced mine with a standard 12v siren, and set the BECM alarm sounder settings to 'klaxon' so it will drive it properly. If you're not fussed about having a sounder, you can just disconnect it and be done with it - though may need the procedure as Gilbert has stated above if its still working.

No one steals a p38. Unless you leave the keys in the ignition and a note on the windscreen saying "please take".

Both my cars have always-on trackers in them that report back to my own tracking server.

Costs me nothing to do, and I have other family member's cars of varying value on it too. In my case, it means I have some chance of recovering them if they were ever taken as a crime of opportunity or whatever.

Having the siren work though would alert me if someone broke INTO it.

No one steals a p38. Unless you leave the keys in the ignition and a note on the windscreen saying "please take".

There's a good portion of people that have problems starting theirs even with the keys!

I guess mine must have the sounder without the batteries in. I just unplugged mine and the alarm system doesn't seem to care.

The battery backed sounder should sound if disconnected, unless the batteries are completely dead, in which case disconnecting it is a good idea.

Sorry, I meant it must NOT have the battery backed sounder.

Yep I just disconnected it and removed it .
On the subject of theft , been three D3,s or maybe 4,s not sure and an Evogue nicked around north east with out the keys! Three been recovered

Probably did have the battery backed sounder - but likely already dead. Big cube like things with a 4 pin plug that is a little loom that splits to two two pin plugs. One is permanent power and ground, the other is ground and signal from the BECM. 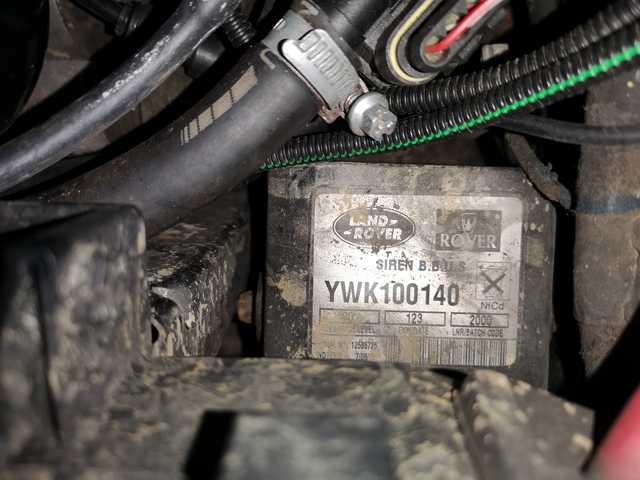 Looks like mine does have the battery powered siren, the sticker says NiCd on it.

The battery maut have been completely dead, it didn't make a peep when I unplugged it.

Also, 17 seconds is a rather weird time limit to set for unplugging it - is there a reason for it that anyone knows?

The first bit is to unplug it and the within 17 seconds is so the alarm unit doesn't assume someone is trying to steal it and is disconnecting the sounder so as not to alert anyone.

Ok. I didn't know about or follow that procedure at at all - I simply unplugged it.

Shouldn't that have then alerted the alarm system in some way? Or will the dead battery have broken the circuit in some way and triggered the alarm at some point before that?

No idea, but if you disconnected it and it didn't go into alarm state and immobilise the car, don't worry about it.