rangerovers.pub
The only place for a coil spring is up Zebedee's arse.
Quick oil question

I learnt something new last night while reading the owners manual.
You're supposed to check oil level with engine hot.

Never known that before

ENGINE OIL LEVEL CHECK & TOP-UP
Check the oil level at least every 400 km
(250 miles) when the engine is COLD and with
the vehicle resting on level ground, as follows:

NOTE: If it is necessary to check the oil level
when the engine is hot, switch off the engine
and let the vehicle stand for five minutes to
allow the oil to drain back into the sump. Then
follow the procedure already described

Well that is a new one on me alright....

I learnt something new last night while reading the owners manual.
You're supposed to check oil level with engine hot.

Never known that before

ENGINE OIL LEVEL CHECK & TOP-UP
Check the oil level at least every 400 km
(250 miles) when the engine is COLD and with
the vehicle resting on level ground, as follows:

NOTE: If it is necessary to check the oil level
when the engine is hot, switch off the engine
and let the vehicle stand for five minutes to
allow the oil to drain back into the sump. Then
follow the procedure already described

Well that is a new one on me alright....

Weird...
I know, it's not a mistake as the second paragraph confirms the first.

Of course the point may have originally been around H&S for dim owners, i.e. less likely to burn themselves if the engine is cold. Just a thought.

Must go and have a look at the handbook!

Another question.
On a gems engine.

Is the oil filler cap in two pieces

I unscrewed it and the full lot came off.

Then I put it back on and the funnel stayed and then the oil plug came out separate.

I had that on my Disco, the whole filler tube would come out when trying to remove the cap. The threads between the cap and tube were very tight. I used some valve grinding compound to work the threads back in. If you do this, make sure you get every bit of compound out before reinstalling it.

Yeh thats not a bad shout.

Inside the gems hole in the rocker cover. Does it just smooth out straight into the engine. Or is there a gap at the end of the thread where the filler cap screws up to

Inside the hole you should see the splash shield so you aren't looking at the rockers. Mine used to be a 50/50 chance whether the cap or the whole thing would unscrew so I cleaned up the threads in the rocker cover, degreased the funnel part and put it back with a slobber of Loctite. There should be a couple of lugs inside it that you can lever against the screw it in good and tight (or use to hold it steady so you can unscrew the cap).

I think iv got cruise control by the looks of it. There seems to be two buttons on the stalk.

An i and a bell symbol.

But don't seem to do anything.

Also got 2 small buttons on the steering wheel. Can't make out the writing. Think one either says et or reset

i is for info, press that and it shows Range, Average MPG, Average speed, Trip 2, and then back to Trip. The Bell symbol is for a speed warning, press once to to it on, press and hold and the speed you have selected for the warning, increments in 5MPH steps, release it when it shows the speed you want it to warn you when you hit it (actually it goes off about 3mph below). Press it again and it turns it off. Scared me sh*tless one day. Missus was driving through Poland while I was gently snoozing in the passenger seat when I was woken by a continuous beep, beep, beep from the dash. Told her to pull over immediately but the dash showed no faults. Turned out that she had accidentally pressed the button and had turned the speed limit warning on. As it had never been used, it was set at 20mph so as soon as she exceeded 20mph the dash started beeping constantly. Just in case she did it again, I set it at 90 mph.....

For cruise, which you do have as the bellows can be seen just behind the EAS box with the cable running to the throttle. You will have a button marked with a Motorway symbol next to the EAS rocker and hazard switch, that turns on the cruise control. You then use the left button on the steering wheel to set the speed and the right button to disengage it. It will also disengage if you touch the brake pedal. However, it won't work. It is driven by a small vacuum pump and you will see a couple of short hoses and a Tee piece on the back of the bellows. These hoses will almost certainly be perished and split at the Tee. One of the hoses runs to a switch on the brake pedal, that one either splits at the switch or where it passes through the bulkhead (or both). Hoses are 6mm ID and, other than getting a replacement through the bulkhead and getting your hands onto the brake pedal switch (not a lot of room), simple enough to replace.

The info button doesn't seem to work, then again the horn does work aswell.

Just when I was about to put some trim back

Info button probably hasn't been used for many years so a squirt of contact cleaner inside the switch might be needed, same goes for the speed limit button. If the horn doesn't work, and as you have an SRS fault showing, the rotary coupler behind the steering wheel could be damaged. That carries the wires from the buttons on the steering wheel (and to the drivers airbag) to the rest of the world.

I have the horn relay missing in the fuse box. Will this also control any power to the steering wheel.

Need to source a replacement but looks smaller than the rest 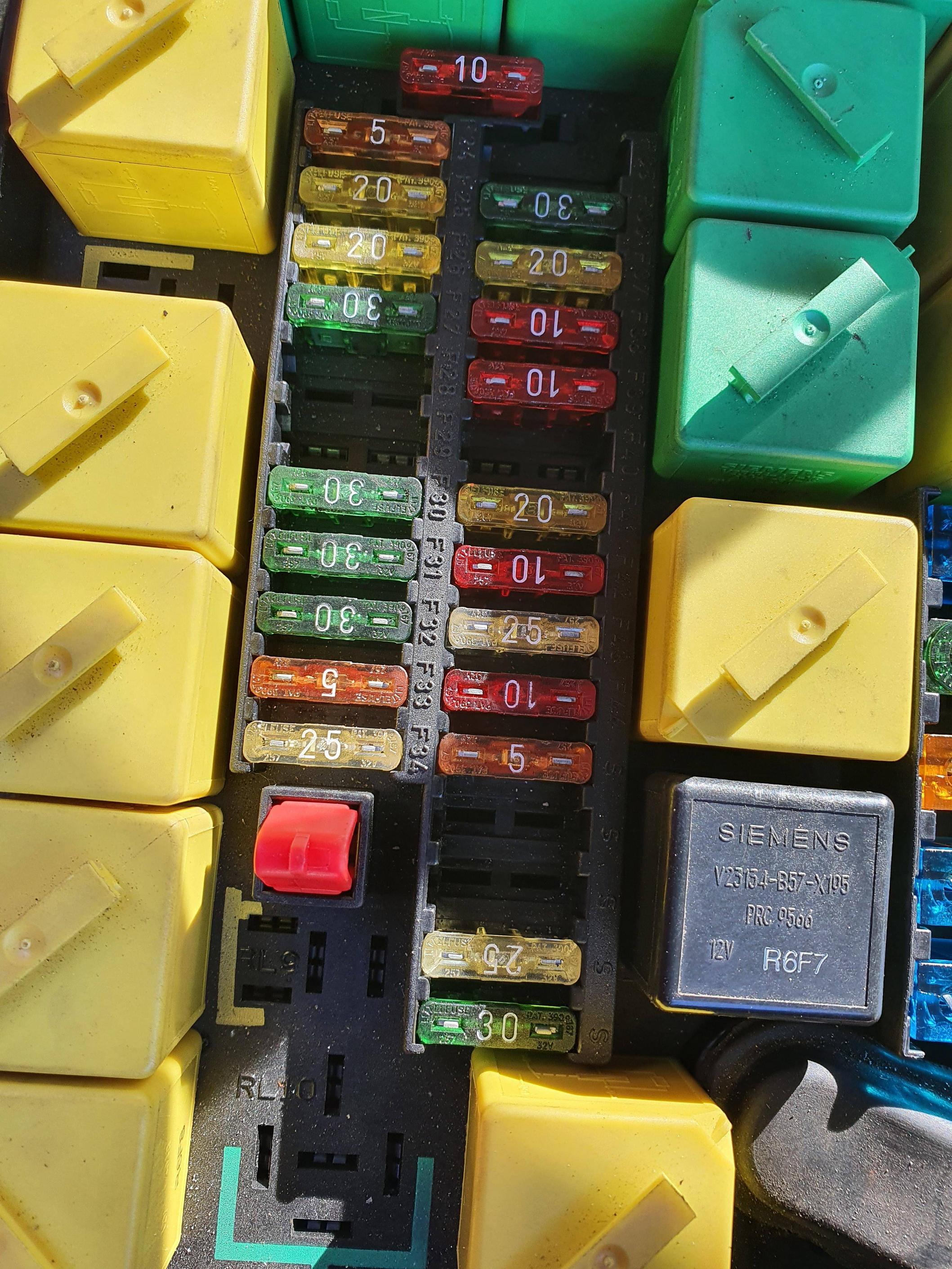 Will that be stopping power to the steering wheel all together. Hence the srs light aswell.

Or does the missing relay purely stop the horns working

Purely the horns. I suspect someone pulled it out to stop the alarm before realising the alarm has a separate sounder.

Coolant temp needle on the dash moves up off the starting point but then doesn't move.

Yet cheap plug in I have. Says temp up to 89