The crank sprocket will only go on with the mark in the 12 o'clock position when the crank is a TDC on number 1. So, following the process in the Overhaul Manual, you fit he sprockets with no chain, line up the marks, pull the sprockets off, fit the chain and then slide them on.

The head bolts are way tighter than the crankshaft pulley. I’m sure my medium duty impact wrench would never have budged my head bolts.

Just been looking at the specs for the standard cams, 4.0 litre (GEMS and Thor) has a duration on both inlet and exhaust, of 285 degrees, GEMS 4.6 has a duration of 264 degrees and Thor 4.6 is 272 degrees but the inlet opens 14 degrees earlier and the exhaust 8 degrees earlier. So the Kent cam with a duration of 262 degrees would suggest initially that it wouldn't be as good but we don't know what the timing is (and I doubt they will publish it or you could get a blank ground to match). The only thing that is different is the Kent cam has a lift of 11.2mm compared with a lift of 9.94mm. The rocker gear has a ratio of 1.6:1, so the valves will open 2mm more. However, I've no idea how, why or what sort of difference that makes, cam timing has always been a bit of a black art to me.

Gd - if cam timing is a black art to you, rest assured it's like double dutch heiroglyphs to me!

So, before pressing the button I have sent an email to the tech-support guys at Kent as well; and am researching further on cams and options/pitfalls. Even if I didn't get all of the "extra 22bhp" they're claiming, if I got some of that, and didn't cock up the engine running, I'd be happy. It would be at least as good as it was when I took it apart, I'll have more confidence in the engine, and in myself having learnt some new stuff along the way. Like all this stuff about camshaft... who knew!

Finally a bit of 'progress' this eve, but it was a bit of a hard fight still.

First time I've had or used cobalt drills - won't be the last. Even at this stage I had to use the impact gun to twist off the last of it. 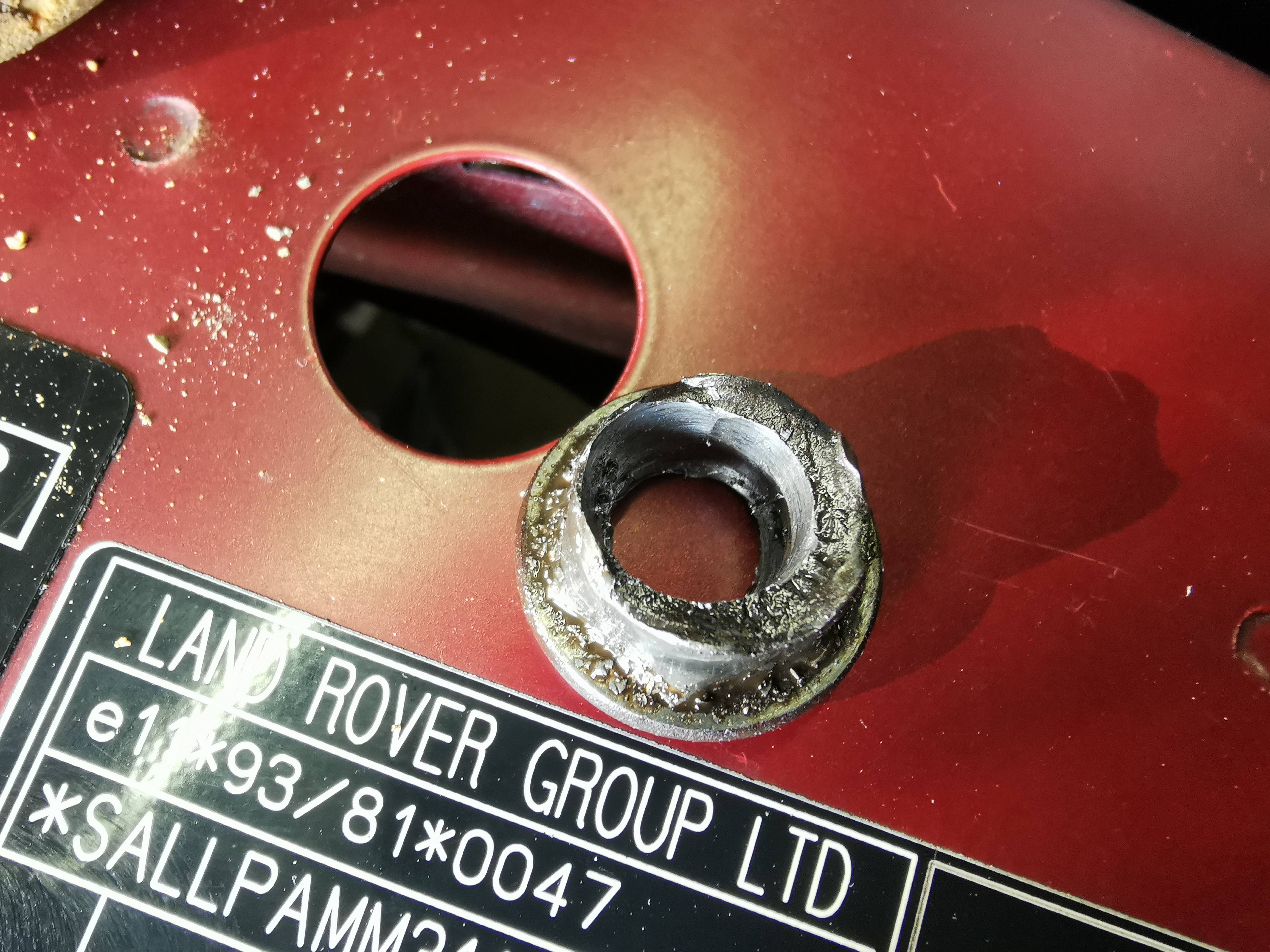 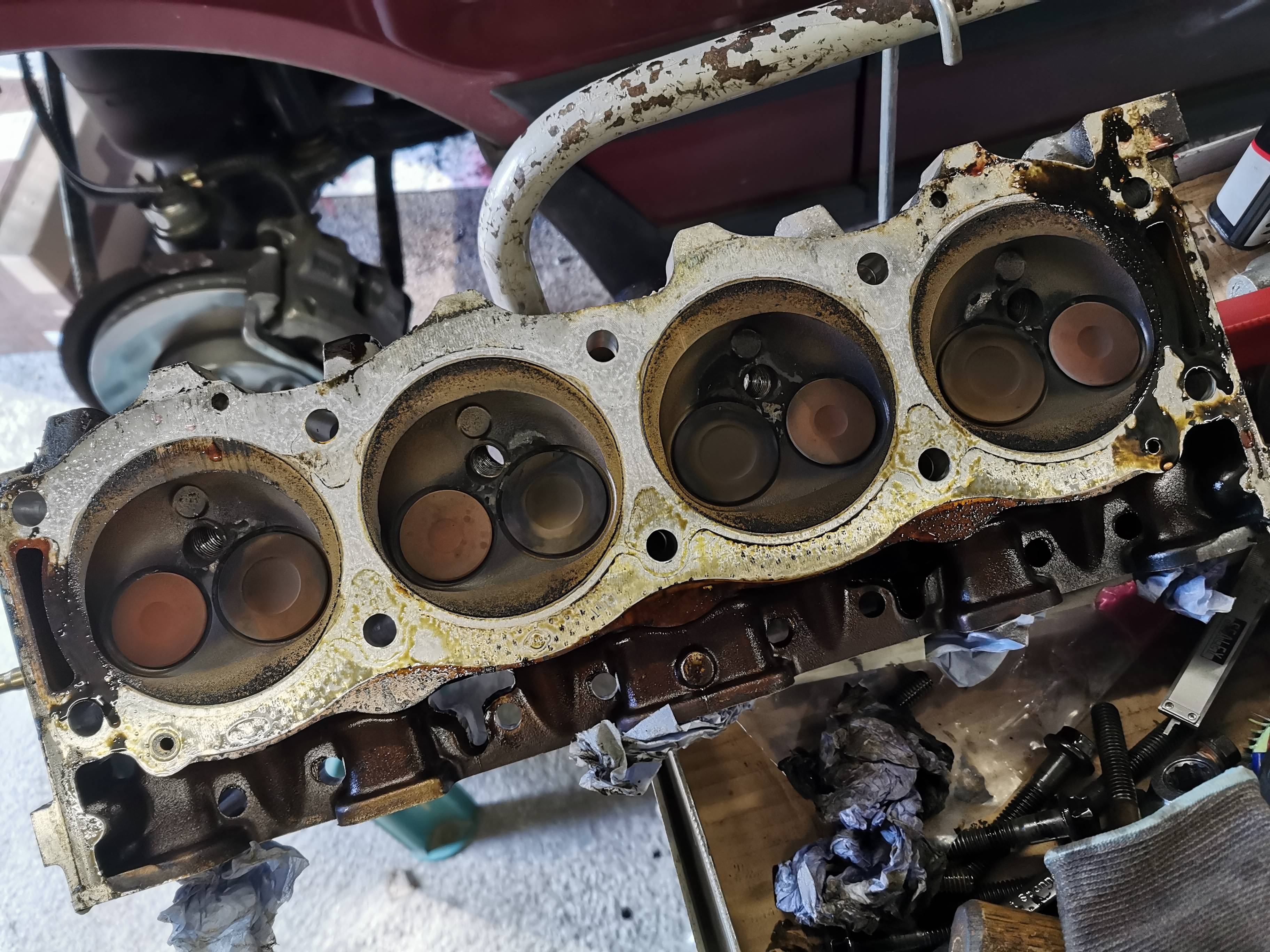 Obviously enough, I had no idea what to expect, but it all looks fine to me!

LH # 4 cylinder is maybe the 'grubbiest' 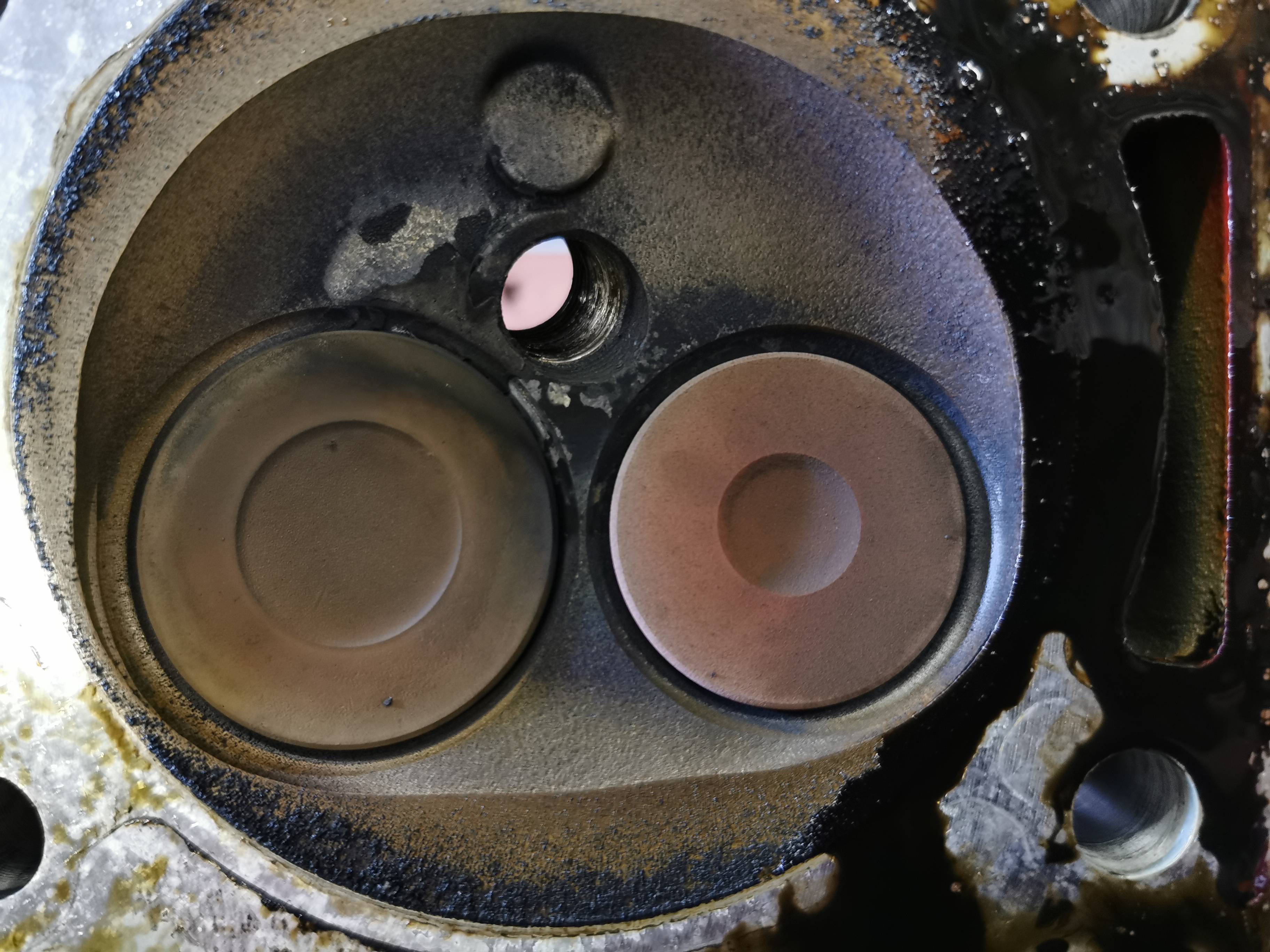 Followed by its neighbour - LH # 3 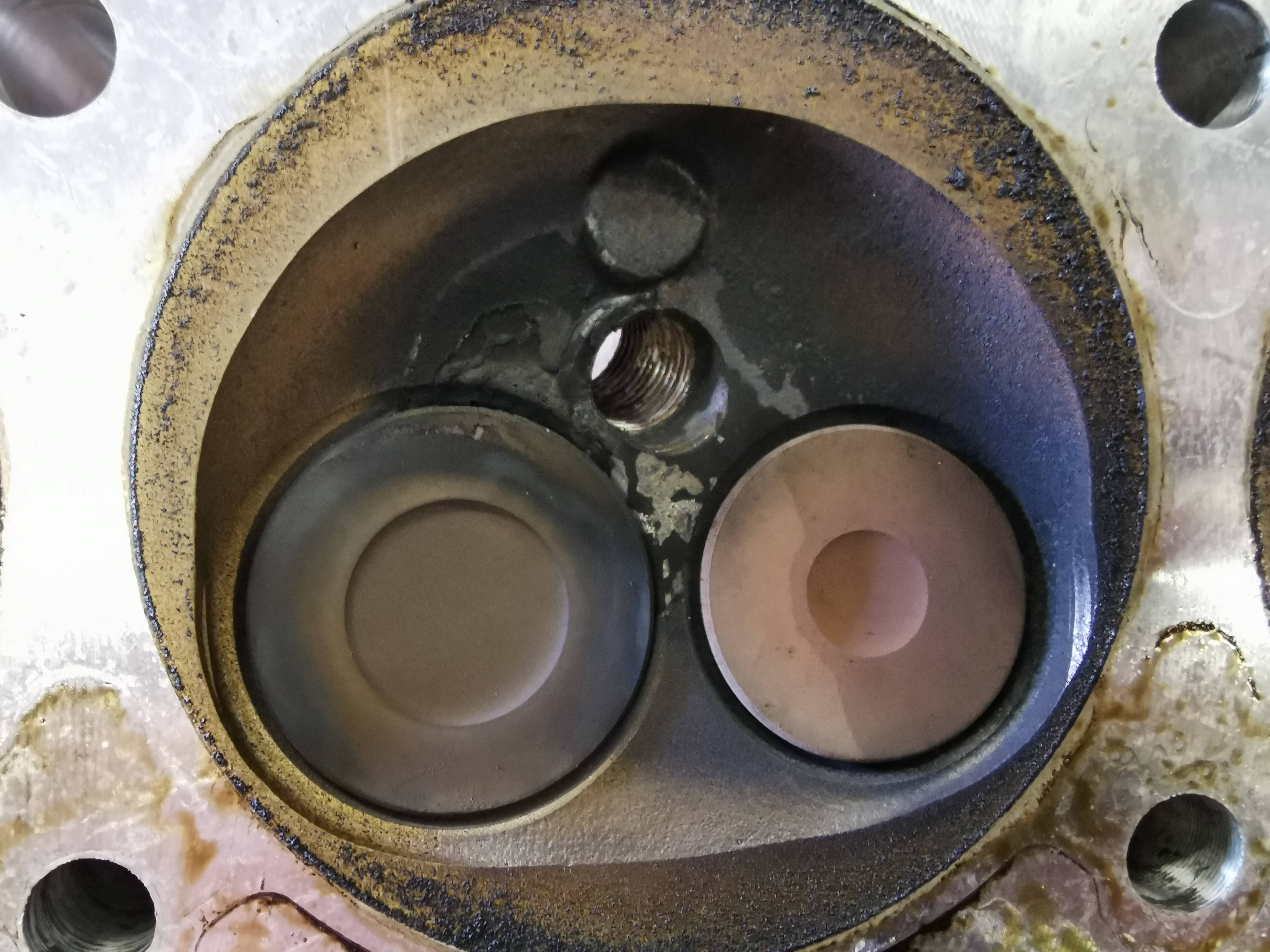 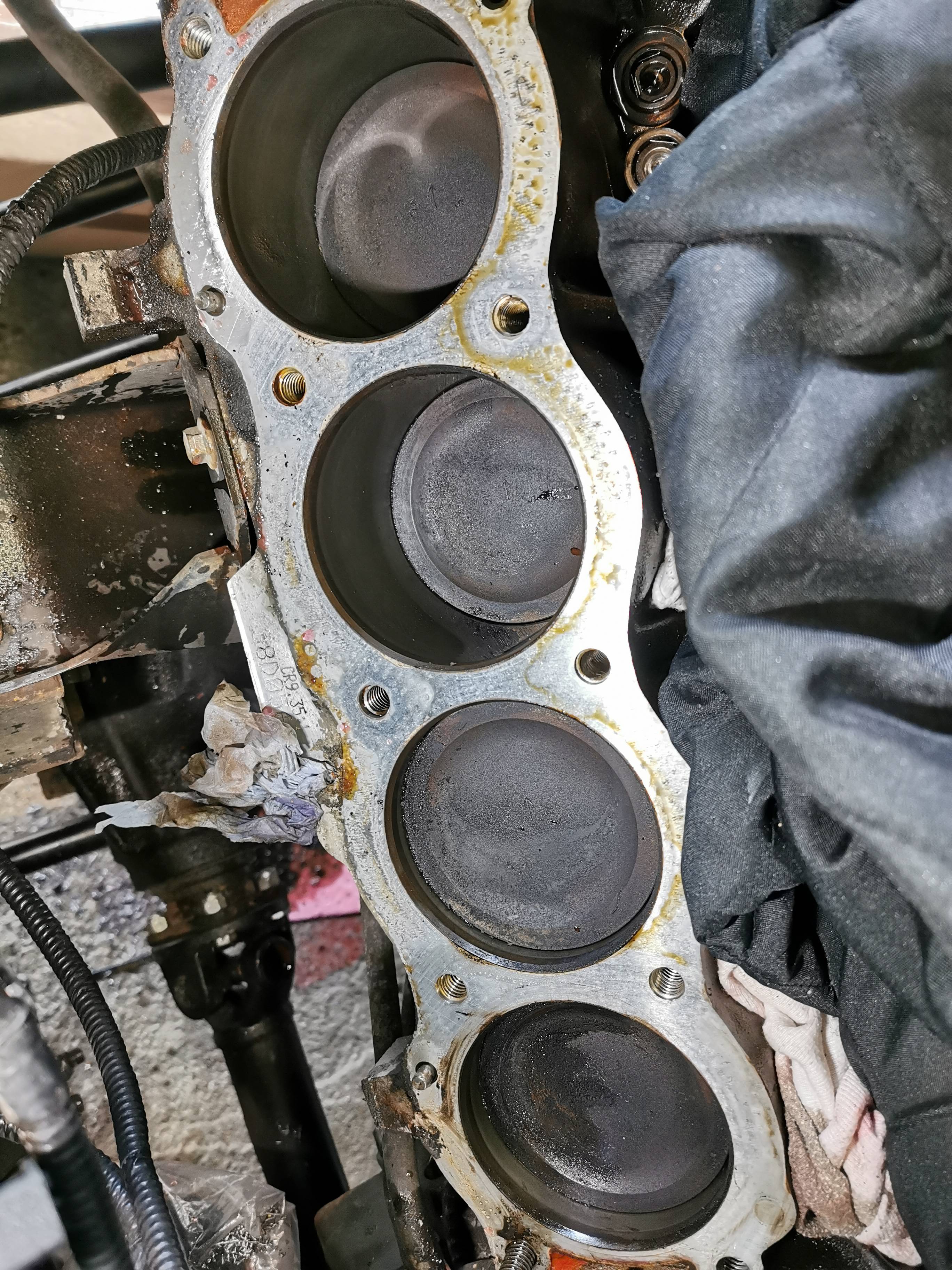 It's hard to photo, but there are still faint hatching marks on these bores. Though a couple of faint vertical lines too. 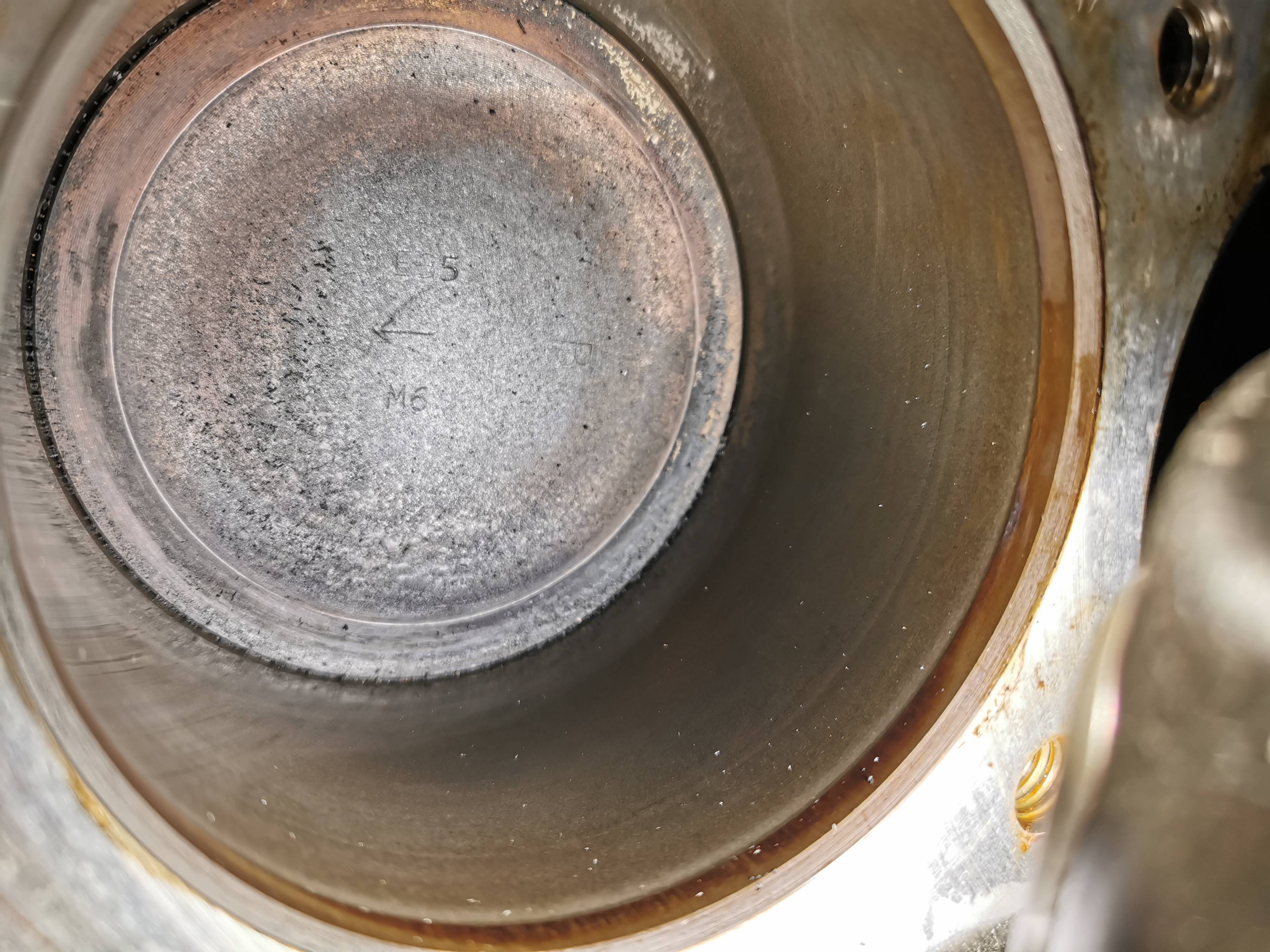 The gasket is showing no sign of leakage, and is actually a genuine LR Elring - it has LR and the part number stamped on it. I don't know where all the muck on the front of the engine was coming from, maybe the valley gasket, but I'm pretty sure it wasn't the head gasket.

And, not quite 'best of all' but when I went to the remains of that awkward head bolt - the bloody thing just came off in my fingers! Aargh. But what a joy that I don't have to fight with it to take it out.

So if anyone spots anything in the pics that I haven't seen, please let me know.

Now, the numpty questions (there's always numpty questions)
1) How do I turn the crank to move the pistons? Or, what's really concerning me I suppose, can you move the engine with the transmission in Park....

2) Is it actually possible to remove/refit the camshaft with the engine in the car, and without removing the A/C condenser? I've measured the cam, roughly 51cm. The space between the block and the condenser, roughly 41cm. But perhaps the shaft angles when it comes out? There's no mention of this in the overhaul manual, but perhaps that assumes the engine is out and on the bench...

1) Yes of course you can, you crank her over to start her in park eh!! all you're doing is turning the TQ which in turn is rotating the front pump of the gearbox, all park does in engage a pawl to lock the output shaft.. if the front cover is removed I just thread the bolt in to the end of the crank and turn it that way.

2) I definitely removed my cam without taking out the engine it comes out straight I pulled it out just with the rad removed and the engine and gearbox coolers just sat there loose iirc once unbolted all the rads have a fair bit of movement in them..

See! I knew that was a numpty question. I hadn't stuck the nut back in and was just trying to turn the shaft by hand (though with my 'grippy gloves' on, and it seemed pretty solid. I just had a little panic that I'd cocked it all up at the very outset.

On the rads etc, I'll to investigate that too then, or just decide to junk the whole idea of the replacement cam and rebuild it the way it is. Pretty sure the A/C system is empty anyway.

Thanks for the reply.

Don't look to be a lot wrong there, combustion chambers, pistons and bores look fine. Check the head face for warp, clean it up and you'll be ready to start putting it back together. Radiator simply lifts out once the hoses are off. They did originally have a small bolt on each side at the bottom but if it's aver been out they will almost certainly have been left out. Yes, there isn't much you can't drill with Cobalt drills and a can of cutting oil, I had to drill the heads off 4 stainless steel bolts yesterday which would have taken the edge off standard HSS drills in no time.

Agree on the lifters, there's no way you'd fit a new camshaft without new followers but it wouldn't, or at least shouldn't, need rocker pedestal spacers unless the unloaded part of the cam was at a different height to original. It would also need to be quite a way out as there is a fair amount of tolerance on the hydraulic lifters (see http://www.v8developments.co.uk/technical/valve_train/index.shtml). As long as the cam has been specifically designed for the engine then the unloaded section should be the same depth and the timing should be right so no need for a vernier.

Thanks guys,
There are followers/tappets in the order with the cam. I think the cam is specifically designed for the 4.0V8, and as I've said Turners have been fitting these for many years.

In further news... the second head came off yesterday evening. A breeze compared to the first now that I had the 'knack'. The pics of head and block aren't sufficiently different from the LH ones above to be worth posting. I haven't managed to get a straight edge across them yet, as I need to do a bit of a tidy in the garage, but I'll be sending them to the local engine machine shop anyway for a clean up and pressure check. Another genuine LR stamped Elring gasket...

And, in looking at wiggling the other condensers and coolers out of the way to get the cam out, I've noticed that my A/C condenser is falling apart; the drier/receiver looks like a WW1 mortar shell that's just been dug up; and the system is completely empty....

Every day is a schoolday. On the plus side I've found a helpful local A/C guy who was happy to offer initial advice last night, and will come along and check out the system/fill it once I've put it all back together. Parts and HNBR O rings now in the post...

Easiest way to get power is 4.0 litre pistons 4.6 rods n crank --- cam and Rhoades lifters ported heads ----- whether it's worthwhile in a brick on wheels is open to debate --- personally I'd save my money ---

If you can make it a 4.6 I think it will make a big difference. My P38 is 4.6 and does fine on our mountain roads, while my D2 when loaded for camping is a bit anaemic. It’s something I’d like to do to the Disco someday.

So the GEMS 4.6 produces more power than the Thor at the expense of a bit of bottom end grunt and the Thor 4.0 litre (as used in the Disco) is the least powerful. However, I've got two GEMS, a 4.0 litre and a 4.6 and in all honesty the difference in performance isn't really noticeable when driving.

^^ That's reminded me that I meant to ask what the purpose of those boxes is? I hadn't noticed them previously, looking onto the engine from the top. However when I removed the hose, I thought wtf??

Im going to need to get a new hose anyway, as the bit that spurs off near the throttle to go to the valve has broken off.

I thought I saw them (the weird boxes) called 'resonators' or the like?

I read somewhere that they are supposed to reduce intake noise by smoothing out any pulses. One of mine has them the other doesn't and they don't seem to do a lot but obviously somebody thought they were beneficial.

Heimholz resonators. They should reduce the decibel level of the intake noise at certain rpms. People add the same things to the exhaust to get rid of the drone that happens at a certain rpm when you have very low resistance mufflers.

Regarding the difference between 4.0 and 4.6 my Observation is slightly different, the 4.6 has much more low end torque, at least when I compare my model year - 98. Maybe due to the difference in the gear box torque converter (4hp22 with the 4.0 and 4hp24 with 4.6). Several hundreds rpm less while accelerating with the 4.6 and more responsiveness when the lockup happens at higher speeds, even if the gear boxes have the same ratios.
Because of that I swapped the maf and throttle pot with my 4.0 gems for new ones, which made a major difference after 220.000 km ;-) they did not show any fault messages, but driving with cruise control is much smoother right now and it takes over without any lack.

So the GEMS 4.6 produces more power than the Thor at the expense of a bit of bottom end grunt and the Thor 4.0 litre (as used in the Disco) is the least powerful. However, I've got two GEMS, a 4.0 litre and a 4.6 and in all honesty the difference in performance isn't really noticeable when driving.

In the absence of a rolling road......
GEMS never made the quoted power, which lead to court cases in the US. BMW took over, made some upgrades (intake and motronic, I don't know what else) and made more reasonable claims that didn't lead to any more court cases.

I suspect that the Motronic engines actually make more power than a GEMS seeing as they have a more modern intake and Fuel Injection - but I've no data and it's quite possible that they lost power due to stricter emissions regs. But.. the quoted figures are particularly unreliable when it comes to the RV8.