rangerovers.pub
The only place for a coil spring is up Zebedee's arse
Odd experience, Turner Diagnostics, Hemel Hempstead

Dear All,
Anyone ever used Turner Diagnostics in Hemel Hempstead? https://www.turnermechatronics.com/contact-us/contact.html
I stumbled across them googling for HEVAC solutions, web site seemed to show some knowledge of the P38 and makes great claims about what they can fix, down to pcb level if needed. They sounded knowledgeable on the phone and as I have a big valved, flowed and ported fast road cam engine I thought i'd take her up and see what they could do with a re-map, they even sent an automated SMS booking reminder. I pulled up and they greeted me with the bodging builders sharp intake of breath between closed teeth "blimely that's running badly". As she'd just purred up the M4, M25 and A41 not what I was expecting. I asked in what way she was running badly and they said we'd know when they hooked her up but it could just be a bad set of plugs. I was immediately feeling uneasy about letting them loose on my car so I switched to discussing the LPG fine tune they offered, at this point the younger of the two walked off. I lifted the bonnet for the older one to look at the LPG ECU and his first words were "can't you smell the gas?" err no. He then asked the by now predictable "who did this install!", err I did. "You've not got equal length pipes between the injectors and nozzles" he said. My response was two fold, how on earth could he see that standing as he was by the bumper, with the pipes tucked away beneath the injector rails and behind the intake plenum and in any event how was he to know whether I'd cut the pipes to the length of the most distant gas injector and then led those from the closest through curving routes?
He then scoffed at a restrictor ball valve I have in the water supply to the LPG evaporator and finally literally shouted at the plumbing of the evaporator into the heater water circuits, "why have you used T junctions there". At this point my bull**it alarms were at full volume, I said he'd wasted my time and he the same to me, I ended up driving off with him shouting and gesticulating at the back of my car. This was all a 9 am booking so I have no idea if something else set their day of on the wrong footing.
So not what I was expecting and certainly not in my opinion to be recommended to anyone. I now notice despite the many pages on their web site they only have one testimonial. I'm interested if anyone else has had experience of them?

Another one to add to the list along with RPi then, on my one and only visit to them my BS alarm went off within a couple of minutes of being there. I suspect they ride on the fact that they could easily be confused with Turner Engineering. As for smelling gas, you always can. I fired mine up last weekend while doing some work on tking88's car and you can immediately smell gas from the exhaust.

The only review of them on Google isn't exactly positive. Wouldn't expect to smell gas on a multipoint as it only starts supplying gas once it's running, unlike a single point. PC38 does mention injectors so must be a multi point injection of some type. And it is leaking, even a small leak you would smell it.

You can smell the difference in the exhaust between running petrol and LPG, so if you've just arrived somewhere while running on gas, anyone that is familiar would notice it.

You can smell the difference in the exhaust between running petrol and LPG, so if you've just arrived somewhere while running on gas, anyone that is familiar would notice it.

Yeah I will give you that, though its more a case that you can smell its running on petrol whereas you don't really smell anything much on gas I've found, just notice a bit more steam at times. Maybe I just don't smell it though.

Dear All,
Yep looks like my suspicions were correct, they have quite a history of being total beulshighters. Avoid like the plague. 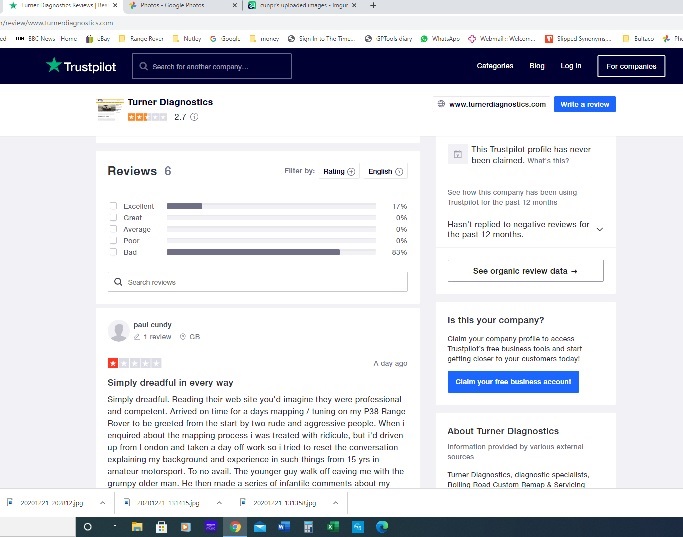 The only person I’d speak to about P38 tuning is Mark Adams at Tornado Systems. I’ve dealt with Mark several times and can only describe him as totally helpful and incredibly knowledgable. He can be difficult to get hold of but he’ll sort you out once you do.

I check everything through trustpilot these days, I’m surprised that there still in business, obviously complete muppets, so many bad reviews..
Another for the warning list..