rangerovers.pub
The only place for a coil spring is up Zebedee's arse
switch pack

My switch pack decided to pack up... all switches dead.. It went from working to not working after being left standing for a week during lock-down. I think there was one trip where it was intermittent, but it went very quickly. It wasn't particularly damp/ humid, but it was cold, for sure.

I checked Fuse 1, which was fine - it controls a bunch of other stuff as well, like the instruments, so was unlikely to have been the issue. One thread said check the relay... but i'm not sure there are relays in the circuit (unless anyone knows differently).

I have taken the board out, and tested the board side of the blue connector when connected to the car. I see 12v incoming for the switch pack, and 12v incoming for the illumination (switches on and off with the headlights. I can also see 12v and 5v on the feet of the voltage regulator. I can read continuity between earth and the pins in marty's pin-out mapping or rr.net for all the window switches. Visually, under the caps, the contacts of all the switches look clean. There was a bit of corrosion on some of the soldered feet of the power connector and the main chap , but nothing too scary - cleaned it up with contact cleaner
I even disconnected the battery and reconnected it (some folks report that that works, although I was sceptical) but that had no effect, other than to ask me to reset all my windows, lol
nanocom can move all the windows no problem - so becm/ windows are fine.

What's the next most likely point of failure. A fried main chip in the switch pack?

I've got one that needs to go back to Marty but he cleared off to NZ before I could post it back to him. All works except if you open the sunroof or LH rear window, you can only close them with Nanocom. Hence getting a rebuilt one from Marty to fit to the Vogue so this one is spare until he is back if you want to try it.

Tnx for the offer GD. I may well take you up on it...at least to properly rule out the car as the culprit. I'll tinker with mine a bit more tomorrow

What's the next most likely point of failure. A fried main chip in the switch pack?

Thanks Miah. What does that mean in practice? what am i looking for?

I don't have the pin descriptions to hand but one is direction, one is clock and the last one is data.

They should be fairly obvious when you scope them.

So with it unplugged, you'll see data packets, with big gaps between them.

Plug it in and re-scope (just data if you're feeling lazy). Those blanks should now be filled with data packets too.

when my switch pack stopped i started by using the multi meter from the power pin in to the next hole in the board to find where the power stopped ,(use the ohm setting) just follow the the tracks on the board. my problem was the holes in the board had gone green and the corrosion had eaten the copper track away in the hole under the vanish in several places . you may have to scratch off the varnish to get a good contact , just use the probe from the multi meter , be careful not to damage the track . when you find the fault just soldier a wire from the power side to the other side
PS i went and purchased the correct wire ,soldier and also a set of drills(get the ones with the plastic knobs) to clean out the green holes from an electronic hobby shop, made it an easy job, cost about $20 all up . happy hunting.

Tnx for the inspiration mad-as, that shd work

I've never seen a dead chip on them. Generally completely dead switchpack is a lack of serial Comms to the BECM, but it's down to corrosion damage on some of the PCB tracks/ through board connections as mad-as found with his rather than a dud chip

I can generally repair them, but as Gilbertd says - I'm out of the country at the moment for at least another 6-8 weeks, so not a lot of use to you... I could be interested in the dead one if you have it sorted by then, though from memory I've got about 10 of them already stacked up for repair that I didn't get around to doing before I left the UK...

Tnx all...I've been testing various bits for continuity, but no joy so far

Tnx all...I've been testing various bits for continuity, but no joy so far

Most of the ones I find it's between one of the serial pins and the first through board connection they come to.

Not all of them are like that by any stretch of the imagination - I found one where there were 3 or 4 places where it has failed, but most of the ones I repair have 1, maybe 2 faulty through board connections.

I use a 0.5mm drill in a rotary tool to drill out the crud, and then a thin strand of copper wire soldered either side to replace it and re-join the broken connection.

I'm not seeing too much wrong here tbh, and i've pored over it with a magnifier, backlit it to see the through board connectors etc. I thought I was on to something when I tested all the resistors, but I switched multi meters and they all read fine. Are any of you experts seeing what I am missing? I don't see any future in pulling apart perfectly good pieces of board - continuity good on all switches - so I'd like to be able to pinpoint the failure first. The silver paint pen is just me marking the switches 😀 and/or Pin 1 on the blue connector. The green rings around the power connections and the chip connectors are actually the green colour of the board, as opposed to corrosion.

If you were in the UK, Marty, this would already be in the post to you !! 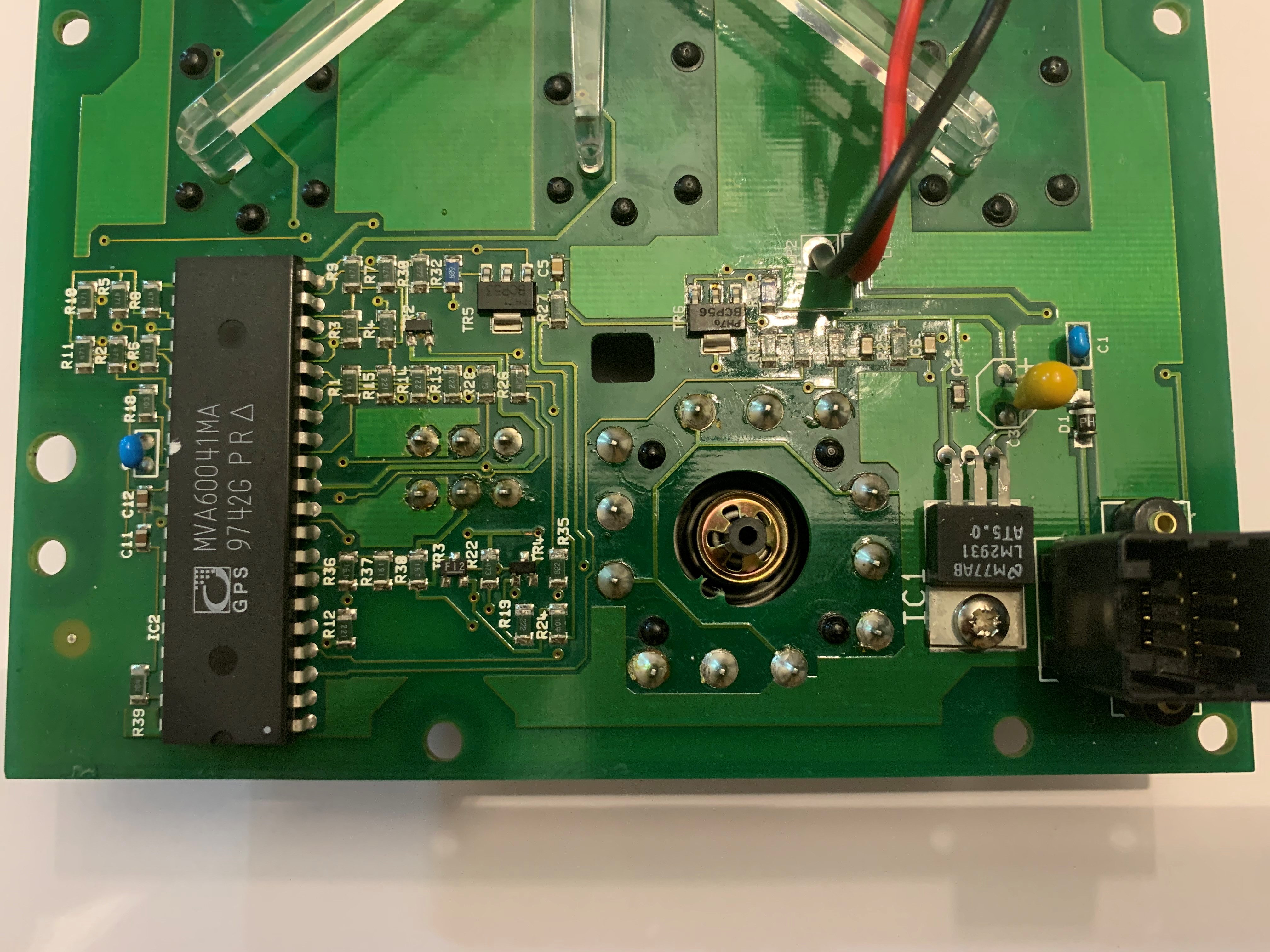 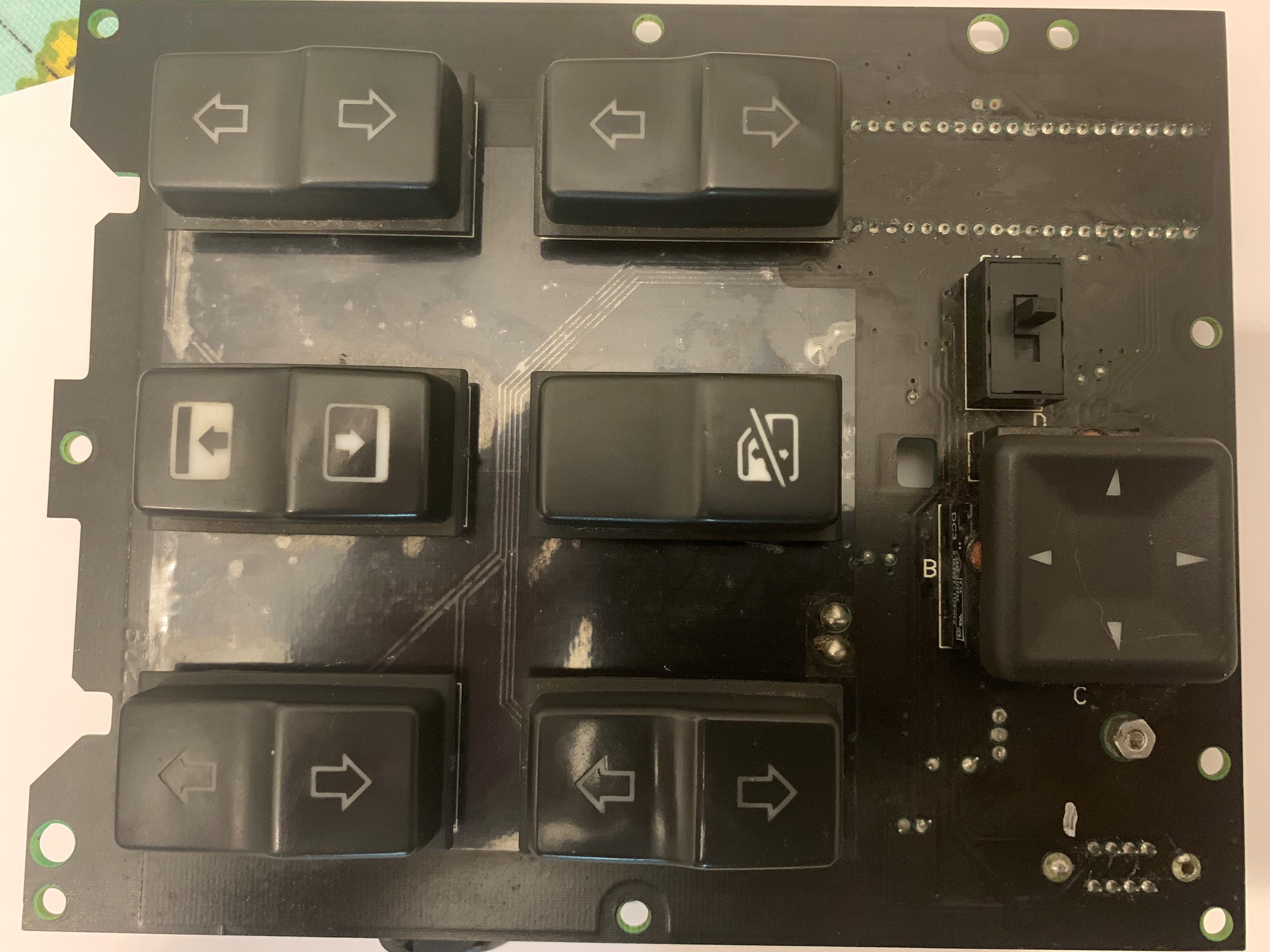 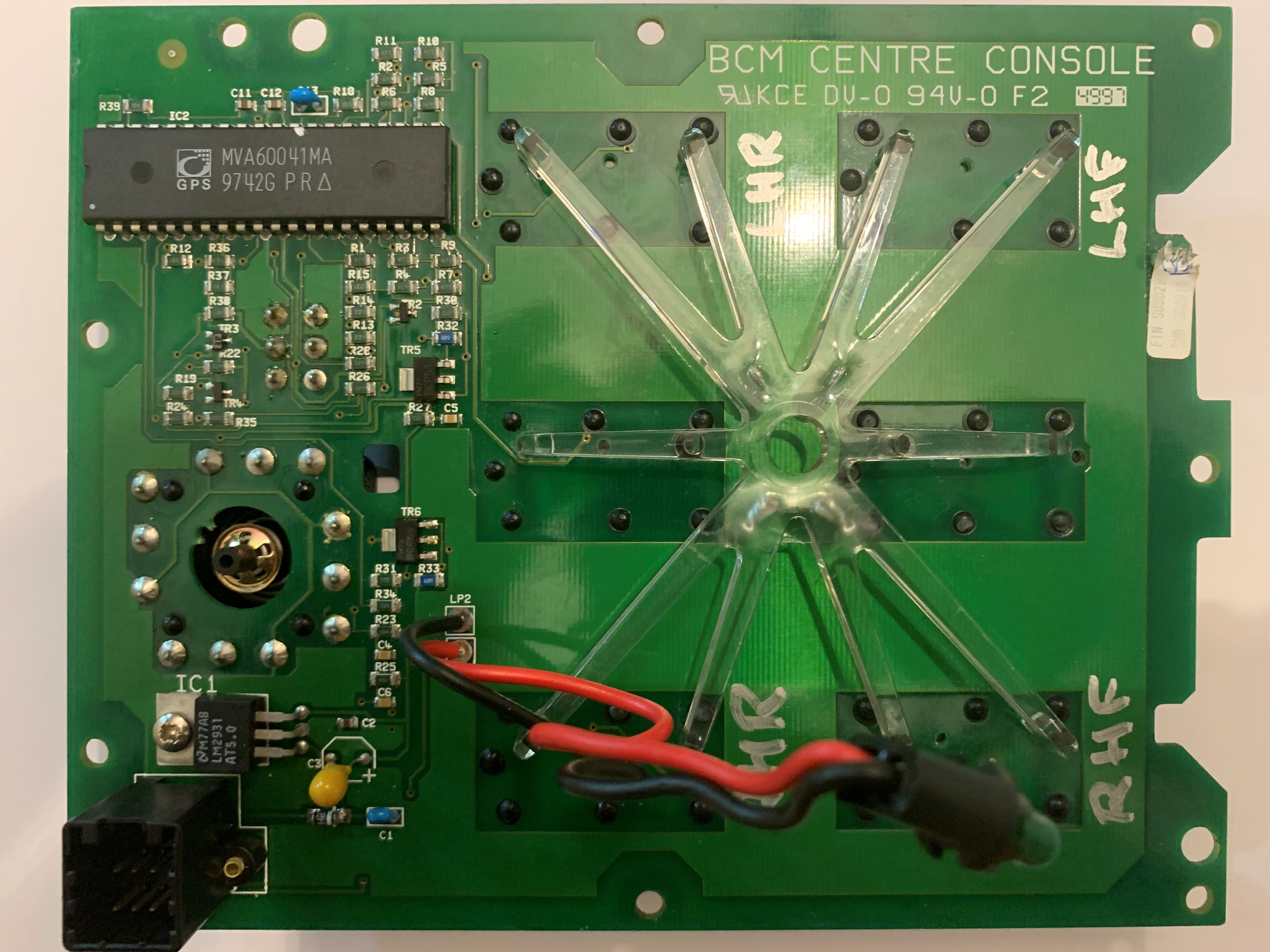 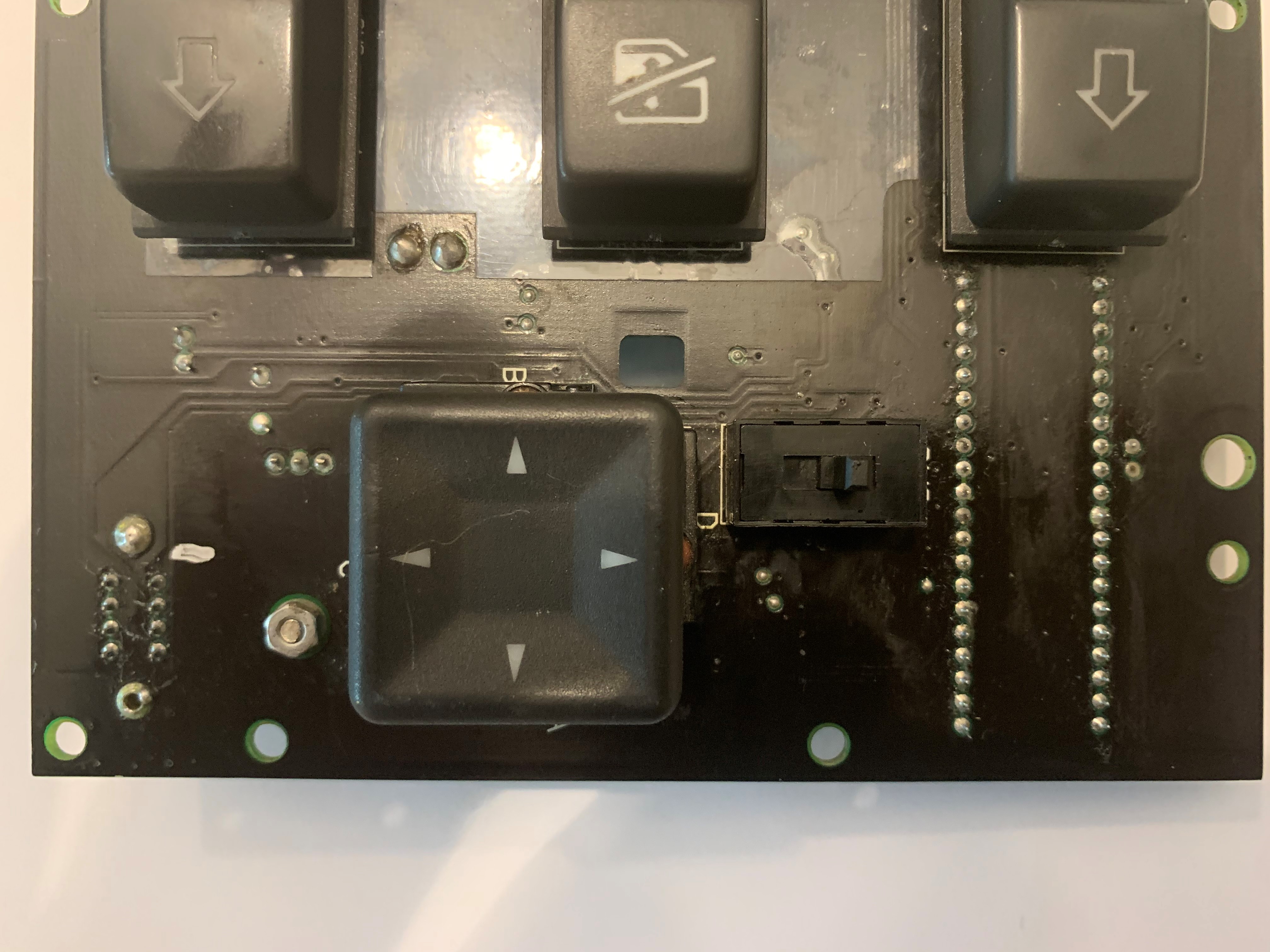 If you can power it, check the LM2931. It's a 5V regulator so will have full battery volts on one pin, centre pin will be grounded and the other pin should have 5V on it. Very carefully check the feed through holes as it's a double sided PCB. If any look even slightly iffy, push a piece of bare tinned copper wire through and solder it on both sides of the board.

I have cleaned out all the cross-board connections with a .5mm driil bit by hand, no joy, next step is to start putting wires through, and solder them up. For those who have done it, did you also remove the covering from the black side of the board? or just the lacquer from the green side?

Yes Rob. if you clean out the holes like that it generally removes the through-plating in the hole too so you have to put wire links through too, and that involves scaping lacquer from both sides.

Yeah, it's not too bad. I usually use a scalpel blade to scratch away a bit of the black lacquer where the bad track/via is, as there are some tracks that run pretty close to each other and if you're not careful you can then bridge tracks with solder.

It's one of the reasons I didn't get around to fixing any of them before I left for NZ... Though I usually find the ones with the electrical issues like yours easier and quicker to fix than ones with button problems, as they're a while lot more work to strip apart and put back together!

Thanks for the replies. The holes were cleaned manually by drill bits 0.5mm and less, so I'm hoping the through tracks are no worse than when I started, under 25x magnification there's no obvious issues. Capacitors seem ok. I have tested every resistor multiple times with different meters and have 6 out of 35 that do not match their face value...have you ever seen resistor failure Marty? At least they would be a quick solder job, if I could source replacements. Have you ever managed to locate a circuit diagram?

Richard - nitro moors ? really? won't that cause major damage? I was wondering acetone, but that may eat something too

Nitromoors will dissolve the lacquer but won't damage the board or the tracks but acetone may work as well. It does on some lacquer but not all.