rangerovers.pub
The only place for a coil spring is up Zebedee's arse
So how cool is too cool?

i think i need to explain my comment
back in the eighties when i done my mechanics coarse the teacher stated that if you was going up to the lakes (our cold area in the mountains) that you needed to change your coolant as the anti freeze component of the coolant would have evaporated out over time as its alcohol based .
now i think David hit the nail on the head when he said its a closed system , back in the eighties cars didnt have closed sealed systems like today , they vented into a vented container or just vented to the atmosphere where now they are sealed so no evaporation can happen. while this may have been relevant then its probably not so much today . back in the days of just using water from the tap and the use of coolant started to be used because things were being made from aluminium, water pumps, heads etc and the water just ate out the aluminium parts. its only in extreme cases that you need to use anti freeze anti boil products instead or just an inhibitor (i think some of yous live in these extreme areas)
PS i only use inhibitor and have never had over heating or freezing issues ever, also never had issues with corrosion of any description.
i hope that makes sense of my comment.

That makes more sense, antifreeze used to be methanol based (meths basically) which would evaporate out but unless you are really old, you were probably given out of date info even then. Ethylene Glycol (which was used in the Spitfire engines in WW2) has been used for a long time now with this Organic stuff in more recent years. You can get away with using plain water in some engines, marine engines often don't have a sealed cooling system and just suck water in from the sea but even with cast iron, it can still rot out. This is one of the heads from a Volvo Penta marine engine based on an all cast iron Ford Windsor 351 motor 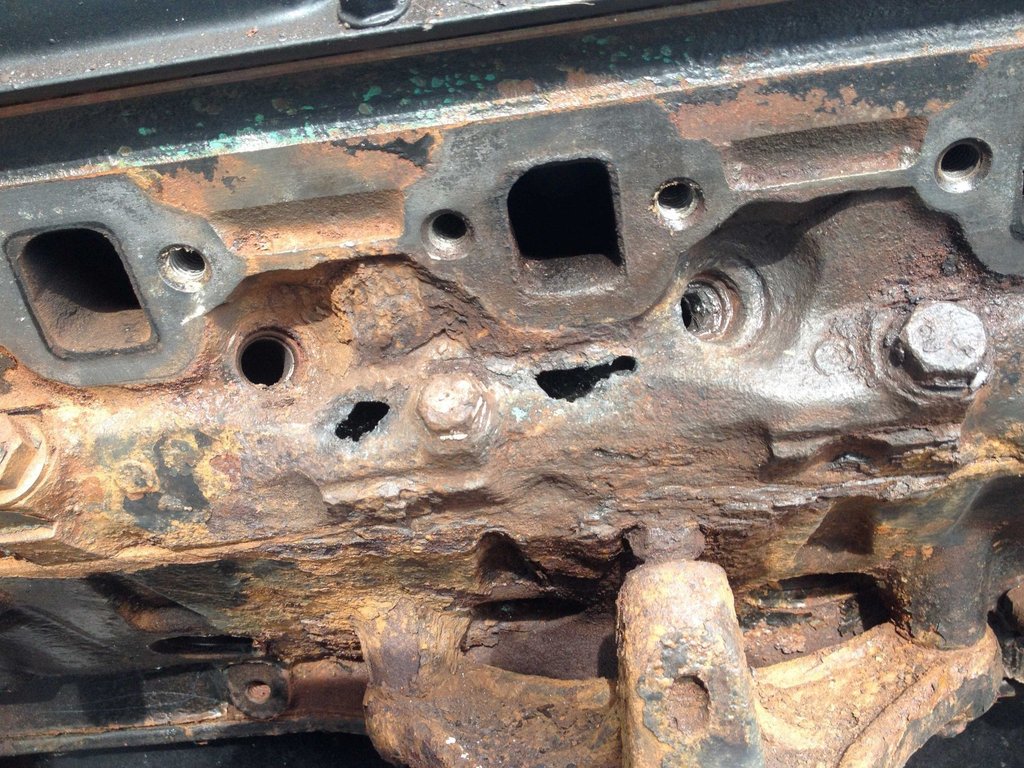 What sort of temperatures do you get where you are then? UK can range between -10 and +30 Celsius (with it getting colder than that in some areas and hotter on odd days in summer), so the antifreeze and anti boil aspects of coolant are needed. Even if you don't get freezing temperatures I would have thought you would still need the additional headroom it gives you when it gets hotter.

the temps in my area are around -2 or 3 up to 35ish , in other places it varies between -10+ Liawenee (lakes area) i have never been their, to 40dec east coast off the state . even with these temps i dont use anti freeze as it is a once a year event so to speak and you have to be in that spot .if i lived at Liawenee i would use it but i dont . i do go to cold areas but i dont stay over night . my car is usually under cover when not being used and if it was a problem i would just drain it
PS my mechanic teacher retired shortly after a completed my coarse so he was of that age bracket you speak off and it was a comment that just stuck in my head so i mentioned it and now its a little clearer as i have never challenged it
as a comment of how hot you can run something , i once came off the cape beach in my series 2A landy(with Holden motor fitted cast everything the mighty 186 red motor )) in 2nd gear with the wind for 10km 4500rpm temps 117dec boiled at 118, oil pressure disappeared halve way along beach which was a worry but could not stop as it would have bogged down in the soft sand and would have lost it to the sea so nothing to loose really, got to the end turned into the wind and in 20 seconds the temps dropped and the oil pressure came back , drove home no problems and it only had water in the radiator no coolant of any description. that motor was still in it when i sold it 2 years later.

So only slightly warmer than here.

There's proof for you, with an Ethylene Glycol mix in there, it wouldn't have boiled and would have stayed cooler so even the oil pressure would have remained. It would have dropped but not disappeared completely.