rangerovers.pub
The only place for a coil spring is up Zebedee's arse
EKA code confirmation.

Hi, I am looking for a bit of assistance, if someone can help. Where can I get confirmation of the EKA code for my RR ?

I am in Dublin, and I have tried the two main Landrover dealer, Joe Duffy Motors and HB Dennis, but they both say that they don't have the correct diagnostics to plug into the P38. I may need to ring someone in the UK, such as Landrover, to see if I can get confirmation that the code that I have is the correct one. I don't believe that anything has been reprogrammed in the BeCM so the EKA would still the the original, correct one.

This has been caused because this afternoon the car went into EKA lockout - I can't use the fobs to open the car, I can open it only with the key, and then the alarm goes off, and the dashboard display reads " Press remote" and "or enter EKA" or something like that. I have had to leave the car in a supermarket carpark as I can't get it going.

The EKA code is not working but I don't know whether it is because I have an incorrect code or because the door latch has given up the ghost. At the moment it looks like it is a trailor home job.

Thanks in advance, Pierre3.

Landrover can tell you from your reg number/ chassis number. They dont need diagnostics to tell you

On the other hand, a nanocom will allow you to input the confirmed eka code and bypass the locks. Assuming your becm has not been changed...

I had a similar issue (but no handy note) when I first bought mine, ... although purchased in Cork and it was on a Dublin plate I found out it was originally a Northern Ireland car, I phoned the dealer in N.I. and actually spoke to the salesman that had originally sold the car, he looked up his files and called me back with the number.
I take it you have tried the code you have with no success?

I have Nanocom here in North Tipp, but I am afraid I don't get to Dublin much at all.

On your door handle query there is a recent thread here you should probably look at first.

+1 on ask an LR dealer for a print of the service record data from their system. Tell them you need the EKA and the print will show that, the radio code, lockset barcode, date of manufacture, options, etc.

No, that part number is for a door latch for a 94-99, the one with the 6+1 plugs, a 2001 will have the single 8 way plug, part number FQJ103260. Not cheap at £258 (inc VAT) or see https://rangerovers.pub/topic/2649-half-price-door-latches. If you want genuine that will just plug in, as all the suppliers charge the same price, your quickest option is to order from a Land Rover main dealer or from them online https://parts.jaguarlandroverclassic.com/fqj103260-latch-assembly-front-door.html. I ordered the exact same part for another car a few weeks ago, called in at the main dealer at around 4pm one day and got a text from them at 8:15 the next day to say it was there.

Just tumbled across a thread on another forum, which has just been revived for similar difficulties, ... the interesting thing being a script on how to test your door lock properly before you splash out, go to the bottom of this page (although all of it may be of interest)

That's a link to Marty's test sheet, also posted as a sticky in this forum https://rangerovers.pub/topic/5-info-front-door-latch-tests

Well there's something I've learned, ... as I generally look at the 'Portal' for the latest threads I hadn't even realised there were sticky's!, I'll have to browse throiugh that lot now and make sure I'm not missing anything.

Hi guys, thanks for all the replies. I rang the main dealer [Joe Duffy in Dublin] and the service manager gave me the EKA code, which confirmed that I have the correct code. Thanks for you guys who said that the main dealer should be able to give it to me. I was a bit surprised, however, that I got the code without an argument about the ownership of the vehicle !!!!!

I have had the vehicle lifted and taken to a well-known Irish Landrover guy, Kings of Wicklow. He has done work on the car before and he said that, as mentioned here, that the problem is most likely the door latch. I will probably bite the bullet and pay for a new latch from Rimmer Bros. I would like to buy a repaired unit from Marty Cox, to support smaller companies, but Kings probably won't like fitting a repaired unit due to "warranty". If I was doing it myself then I would 100% buy from Marty. I have one of his repaired electric window switch consoles which has worked perfectly for ages so I wouldn't have a problem buying from him again. But, unfortunately, it won't be my decision, I will just have to go with Kings decision.

Thanks to Blanco for the offer of the use of a Nanocom, that is much appreciated. Where the vehicle stopped being co-operative there was a couple of guys with a cherrypicker repairing a shop front sign. One of the guys came over to me when he saw me trying to get the motor going, and told me that a friend of his also owns a P38 and had similar problems. This other guy rang me this evening and we had a long chat.

So, at the moment my vehicle is in the tow guys compound, to go on a little jaunt tomorrow.

One last thing of interest. When the EKA wouldn't work last evening, and the alarm kept going off whenever I opened the door, I tried the code again this morning, and after the third attempt the alarm stopped triggering when the door was opened, but the dashboard still showed up " Press remote or enter EKA". So at least I could get into the vehicle without everybody looking to see what was happening. I don't quite know why this behaviour happened but at least I could work in peace and quiet.

Sorry, a last, last thing of interest. One guy I was talking to, the tow truck guy, was local and he said that quite a number of vehicles that he has gone out to, in the same business park, have done similar things. He feels that it could be either the wi-fi signal from a nearby McDonalds or possibly from one of the big electronics stores located along the front of the centre. I regularly found that if I park near a large B&Q then I can lock the vehicle with the fob, but when I come out I can't unlock it with the fob, I have to use the key blade. Weird, I know.

Oh yes - Richard, thanks for the part number for the drivers' side door latch.

Something else that I noticed - I never did pull out the passenger side under dashboard trim panel to look for the OBD port !!! So currently I haven't found it.

I have been thinking about a Nanocom. Is the handiest one the NCOM 06, Nanocom Evolution ? I would upload a picture but Imgur seems to be acting up, it is just sitting telling me that the picture is uploading, but nothing has uploaded. I have tried it 4 times without success. It is usually really straightforward but I wonder whether there is an image limit if you are using the free programme.

No need to pull anything to see the OBD port, it hides right down below the kick panel, but isn't covered.... all the way forward on the transmission tunnel side. NCOM06 would be right for the diesel and is what I have.

Unfortunately, I can't look at the moment as my eyesight won't let me see from Dublin to Wicklow [!!!!🤣] so I will have to wait until I get the car back.

Is the OBD port, what is called, "hiding in plain sight" ?

Blanco, I have been looking in Google for the location of the OBD port in a standard UK/Ireland P38 and Youtube shows it somewhere onder the panel that is underneath the steering wheel. Unfortunately, Imgur isn't letting me upload pictures so I can't post an image from the Youtube video.

Perhaps you could take a quick look at the following video:
https://www.youtube.com/watch?v=svseSyoN8T8

I have a feeling that Richard [Gilbertd] said to me a while back that the port is somewhere beside the steering column, under the plastic facia panel.

Well, I don't know - Imgur is now working again after I created a new album with no images in it !!! 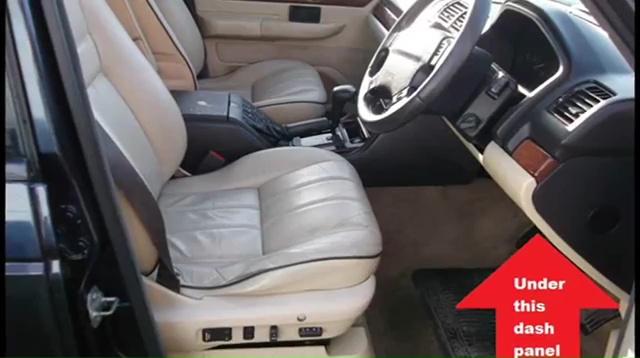 The OBD port is on the right hand side of the passenger footwell on a RHD (UK/Ireland) P38. It doesn't need any panel to be removed you just plug in the cable.

If that particular retail area is known for it, there will be a source of RF close by, possibly a fill in broadcast transmitter lurking nearby. In that case, putting the fob next to the RH rear window so it is right by the receive aerial etched into the glass and pressing the fob button with it there would probably make it work and stop the problem you have. Alternatively if it is a known problem area, when locking the car use the key rather than the fob. If you lock with the key, you can unlock with either the key or the fob without setting off the alarm and tripping the immobiliser. Locking with the fob and unlocking with the key will.

With a Nanocom you just need to plug it in, go to the correct part of the menu and type in the EKA. As said, you do not need to remove any panels, go to the passenger side of the car, on the panel below the glovebox, next the the centre console, run your hand all the way forward towards the bulkhead, the socket is there. That picture and video just goes to prove how much incorrect and misleading crap there is on Youtube....

Sorry Pierre, bit slow this morning, I should have said the passenger footwell.

Thanks, guys, for all your help.

Re: the weird key fob behaviour where the fob will lock the car but not unlock it - I agree with Richard that using the key blade is probably the answer when I go to this particular business park. As Richard suggested, putting the fob beside the receiver at the rear window, I did try this once and it didn't seem to work. I will just remember not to use the fob in future.

I agree about Youtube, there is a lot of stuff posted by people who think that they know what they are doing when, in fact, they haven't a clue. They are just parrotting crap that they have heard from other people, which was incorrect in the first place. I think that is why forums like this are important, because of the number of members who have real-world experience and ban debunk the drivel.

Just out of interest, what is the correct part number for the passenger side door latch ? Just in case I need to order one !!!

Interestingly, when I rang the main dealer about the EKA code he initially said that he couldn't find my chassis number, and it took him a few minutes until he did find it. It's as if there are a different series of chassis number for late built P38's.

I guess the only sure way to tell if I have the correct door latch is to take it out first and then look for the right one.

Again, thanks for the link to LRCat.