rangerovers.pub
The only place for a coil spring is up Zebedee's arse
Random flat battery

I've got the RF filter box so generally don't have any battery issues with the P38. It can sit for weeks or even months and starts no bother... Except Sunday!

Wife used it on Wednesday/Thursday, it's sat for a couple days, went to start it on Sunday and it managed about half an engine revolution, then nothing.

Grabbed a spare battery and jumped it and away it went. Drove 5mins to the park and it restarted fine after the park, and it's been fine since...

I want to give the battery a full charge, but are there any other common issues that can cause drain like this? Couldn't see anything obvious like lights left on.

To go flat that quickly either the battery has reached it's use by date or something has kept the BeCM awake. This is a list of all the things that will wake it or keep it awake from the BeCM SID. 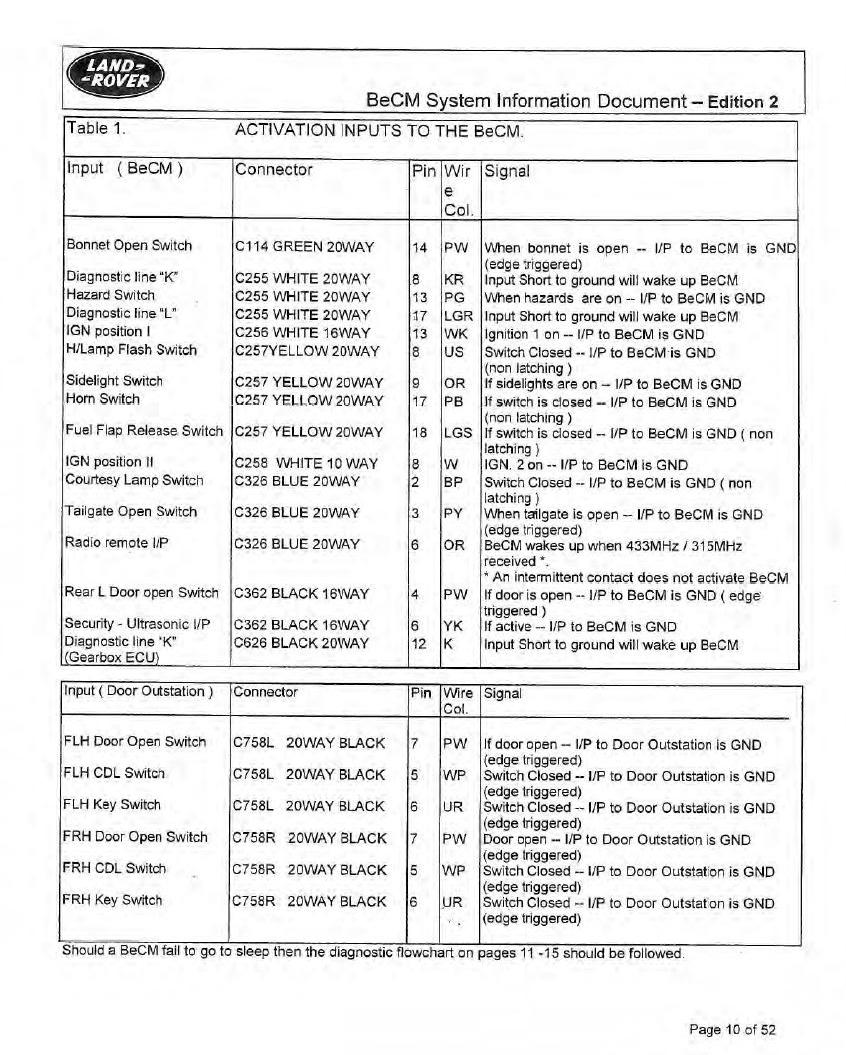 or your alternator is done and the battery is just flat .

Or a rectifier in the alternator has gone short circuit so it is draining through that. It's a 3 phase alternator so if the rectifier on one phase goes down it will still charge, but at a lower level, when the engine is running.

It's been totally fine since and i haven't even charged it yet, so it's nothing terminal like the alternator or even the battery itself.

So I assume it must be something kept the becm awake...

The ignition barrel has been sticking a bit and it will often say "ignition key in" when you open the door. I usually poke the end of the barrel and it clicks out, I guess maybe the wife hasn't done that and it's thought the key has been left in for a couple days?

If it thinks the key is in, that will keep the BeCM awake so that would seem to be the most obvious reason. On a later car it will stop the central locking from locking the car but will still allow it to be locked on an earlier one so you don't get an obvious clue. Blasting brake cleaner into the lock barrel will usually clean out the dust and dirt that causes the microswitch to stick.

It often doesn't get locked anyway so we might not notice even if it refuser, but I've said to the wife about the beep/message and showed her what to do.

I'll have a go with the brake cleaner when I get a chance and see if that helps the sticking too.

Ok this is becoming a real problem.

Over the last few months the battery has run flat many times. If its left for a week or two its almost certainly going to be flat. But on top of that there are weird exceptions.

For instance this tuesday i jumped into it to goto the nursery, it had sat for about a week, and it failed to start. I jump started it and it drove to nursery (2 miles away), it restarted fine after nursery, then drove to the school (1 mile from nursery) and it restarted fine after the school, then i drove it home. I meant to put the battery on charge to give it a proper top up, but forgot. The wife got in on thursday and said it started fine. She drove it about town a fair bit on thursday no bother. Then on friday morning it was completely dead.

Put the battery on charge on friday evening (current limited bench supply, set to 14.4v 10A) and left it for 24hrs. When i checked it on saturday evening the PSU was showing it was still pulling 0.5A so i left it overnight. In the morning, still pulling 0.5A. So i disconnected the charger and dug out the clamp meter for some probing.

Immediately after opening a door, its pulling over 3A, quickly drops to ~2A. Shut the door and it drops to slightly under 1A for maybe 5 minutes or so, then drops to 0.35A and then just sits there. Even half an hour later its still drawing 0.35A.

0.35A feels pretty high to me? Certainly enough to flatten the battery over a week or two? Thats 8.4AH over a 24hrs period. Battery notionally holds 80ah, so 10 days is enough to completely flatten the battery with that load, and ofcourse it'll probably fail to start before its fully empty, and its probably no longer holding 80ah anyway.

But it doesnt feel like "BECM staying awake"? The BECM seems to draw about an amp when its awake, and you can see that after opening/closing a door, but it fairly quickly drops down to this 0.35A reading.

Anyone else measured what the car draws when off as a comparison?

Any ideas what might be going on? The battery itself might by dying, but that wouldnt explain this continuous load, and i dont want to replace the battery and kill the new one by continually running it flat!

It also doesnt explain why sometimes it lasts a week, and other times it doesnt even last 12 hours!

BeCM will draw around an Amp (maybe a little higher on an early car) so it does look like it is sleeping. Quiescent draw when everything is off should be between 0.025 and 0.04A so you've definitely got something that is staying on. 0.35A would equate to around 4W on top of the normal draw, so do you have a light bulb (boot light, glovebox light, etc) that is permanently powered and staying on for some reason? The permanently powered interior lights are fed from fuse 15 so I would start by pulling that and seeing if the draw drops. Don't forget that clamp on meters aren't that accurate at very low current draw (or mine isn't anyway), so confirming with a conventional meter in the battery lead might be a good idea too.

Out of interest, disconnect the alternator whilst it is sitting and see if that makes a difference. It could be the rectifier in the alternator on the way out, allowing some current back draw when not running.

I guess I've done the usual and missed the wood from the trees...

Clamped the lines to the alternator but no current showing there.

I pulled every fuse in the engine bay, no difference.

Eventually I pulled maxi fuse 1 and 4 together and it dropped to 0. (1 or 4 separately didn't change the output)

Realised these are probably powering the internal electronics. Opened the door to start going thru fuses at the seat which obviously kicks the becm on and while sitting there waiting for it to time out I realised the passenger rear interior light button was pushed in...

So I guess that explains the rapid drain, one of the kids has presumably pressed it on Thursday and it's stayed on overnight.

Also suggests that if 0.35a for 15 hours is enough to flatten the battery that the battery is very likely nearing end of life

I have a load tester somewhere, so next job is test the spares I have to see if any of them are actually decent and then swap it out. On holiday next week though so it will wait till I'm back!

My mate did exactly the same with his Classic only his drain was much higher. He'd had the radio out to sort out an intermittent connection and the soft dash Classic has a button on the dash just below the radio to switch the interior lights on and he'd pushed it in while putting the radio back in its slot. As the car was outside in the sunshine, he hadn't noticed that they were on, or at the times he had noticed, he had a door open anyway.