rangerovers.pub
The only place for a coil spring is up Zebedee's arse
Oil cooler hose blown

Coming back from Yorkshire yesterday on the M18 heading to A15 to Lincoln, my oil pressure light came on.
Pulled off M18 at J4 and pulled over. Got recovered home by AA. The hose fitting from the metal pipe to the rubber hose has blown off dumping all my oil.
Car in a right state. Looks as though both hoses were failing.
Anyone explain the fittings to me. 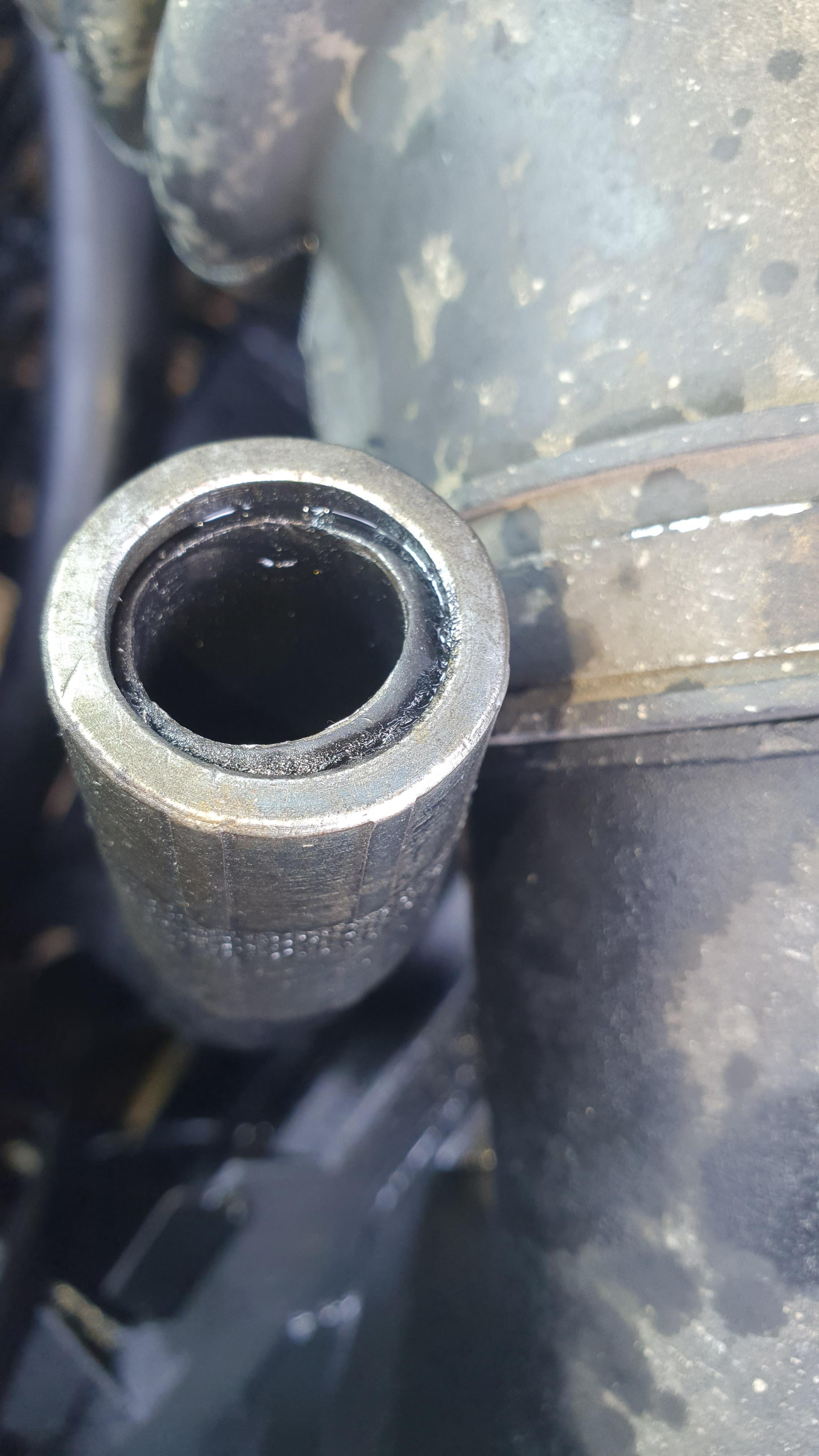 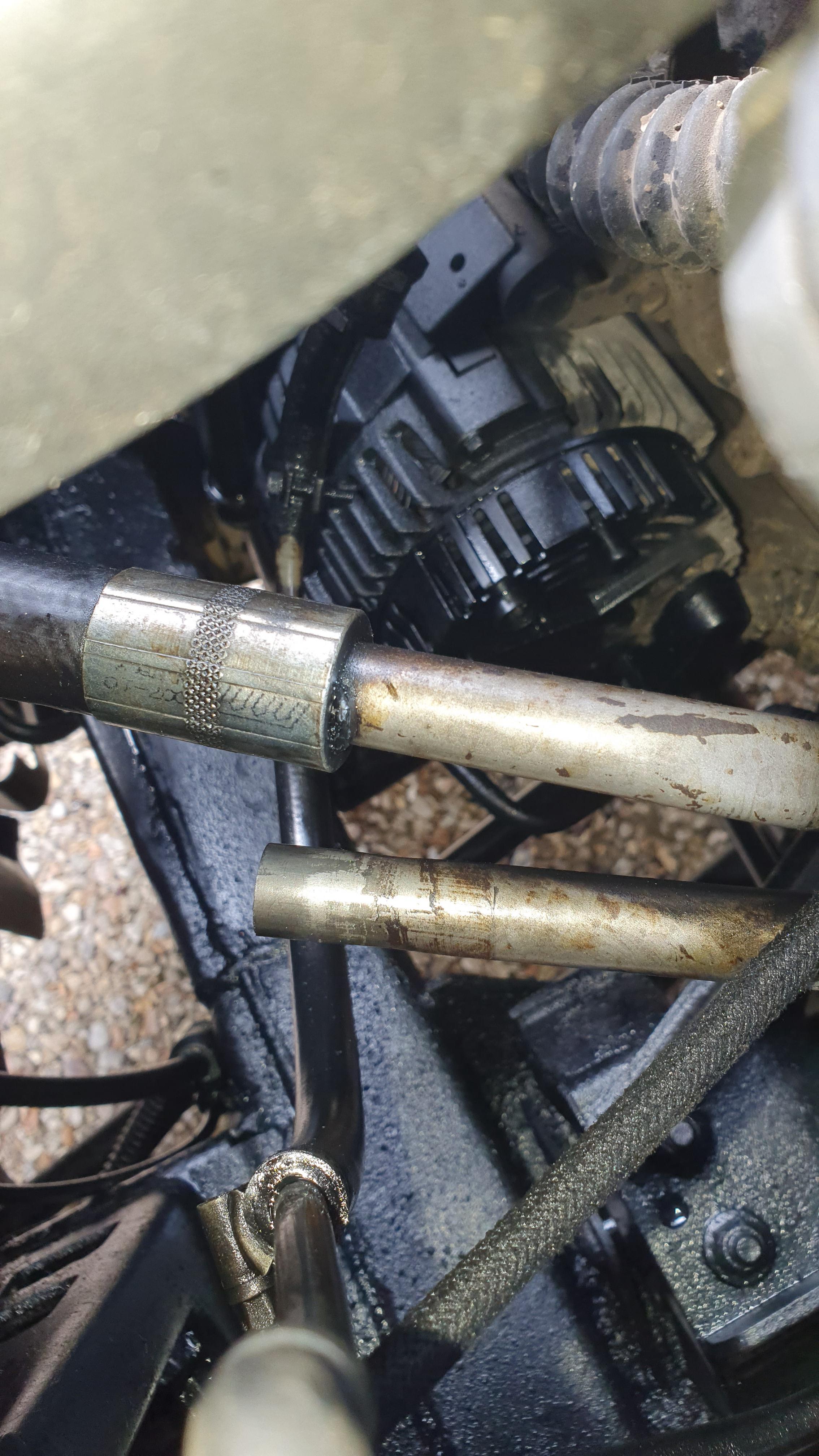 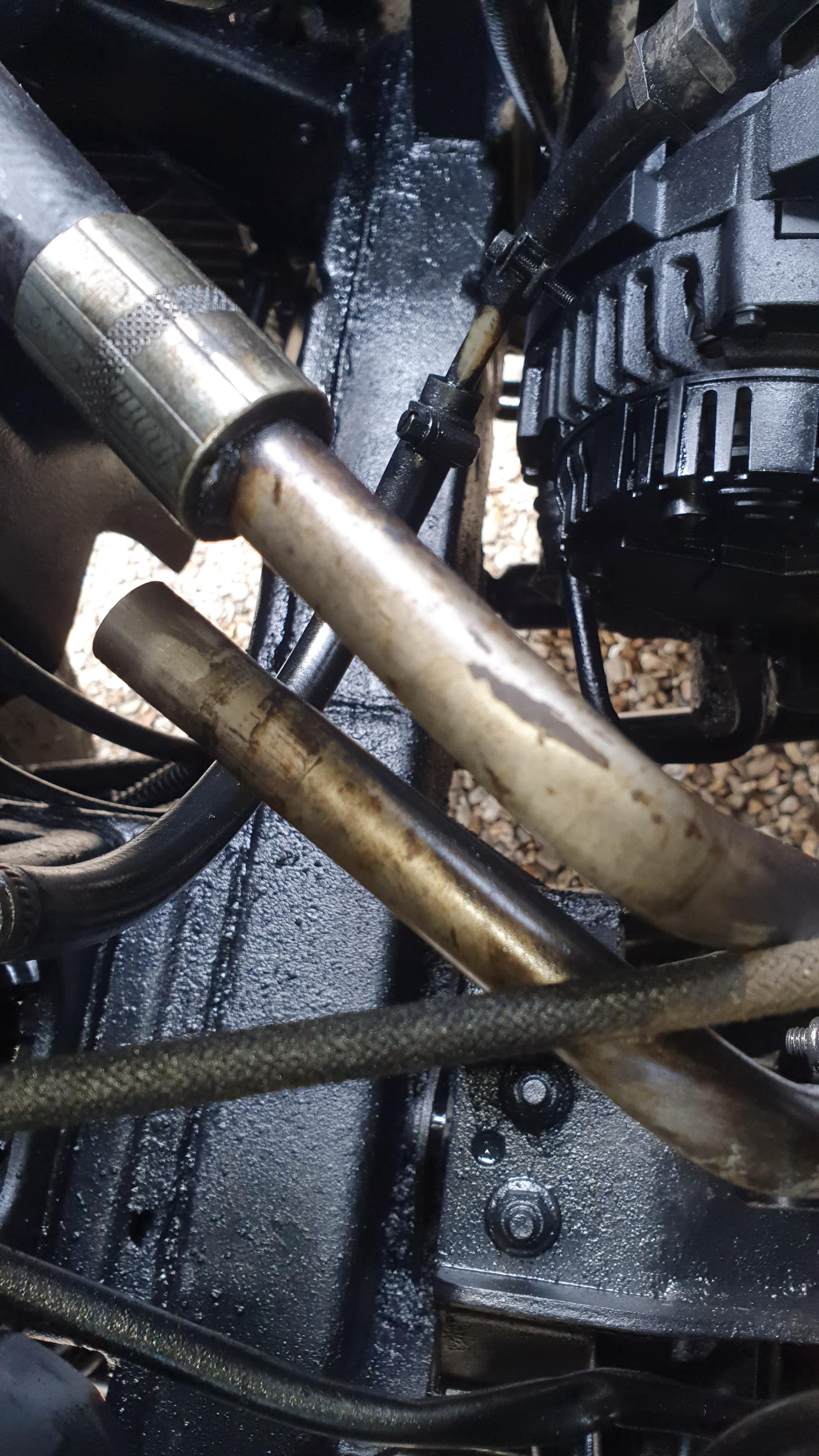 The rubber hose is crimped onto the end of the steel pipe with a hydraulic machine. I'm a little surprised there is no barb on the steel line.

I guess the rubber has deteriorated over time and eventually lost sufficient "grip" on the pipe that its come apart.

Also, i really hope that when you say "pulled off at J4" you meant "shut the engine off and stopped immediately"

If you've driven it even a mile with no oil pressure its likely the engine is scrap.

About 2 years old. About 9000 miles.
So they are butted up?
The one still attached looks like something has blown out too

Not quite understanding the connectors. Never seen them like that before.

About 2 years old. About 9000 miles.
So they are butted up?
The one still attached looks like something has blown out too

The steel collar does the same kinda job as a jubilee clip. Except its permanent.

So the rubber hose is slid over the steel pipe, and then the steel collar slipped over the joint and crimped in a machine with a precise die which crushes the hose and clamps the assembly together.

However like i said, usually when i've seen these things, the steel pipe would have barbs or ridges on it to increase the "grip" on the rubber hose.

Bit slow and shows him installing a fitting rather than pipe but it works the same way and shows how it goes together.

Just been out to look at it again.
They've basically slid the metal pipe into the rubber pipe and put a crimp on it.
That's why I couldn't understand it.
To be honest, the crimp grooves are not very deep.

They doesn't look like OE pipes to me. Maybe they have been changed at some time in the past with some that were made up?

Looks to be a cheap and crappily made pipe to me.

Common practice with that sort of "make up any pipe" system is to run an expander round inside the metal pipe to swage out a ring or two for the rubber to grip. Crimp squeezes the rubber down around or between the raised rings so it can't come out. Kinder to the pipe than barbs but you have to get the sizes just so. The rubber pipe would have to expand to go over the ring. Metal sleeve stops that so the pressure only has to be enough to hold it in place.

That one looks as if the crimp force is generated by knurling rather than squeezing so I'd expect to see two swage rings on the pipe. One each side of the knurl effect. Normally knurls are though of as raising metal but on thin material with compressible inner support they go down just fine.

Its always surprised me how little it takes to hold a flexi pipe against considerable pressure. You just have to make sure the pipe can't stretch and shrink its wall thickness to win clearance. One place where Poisson ratios, in this case basically the tendency of the flexible "rubber" pipe wall to get thinner if its stretched, can bite you. Its not the same for all pipes. The way the hidden re-enforcement cords are laid in can make a considerable difference.

Given the right pipe its possible that simple frictional pressure on plain pipe would be OK at lowish pressures. But I'd be very chary about expecting a "rubber" pipe of any style to have a low enough Poisson ratio not to thin its wall down enough under longitudinal stretch pressure sufficiently to loose grip. Which is what has happened there.

Contrast with the nylon pipe on our air suspension systems which essentially doesn't thin down when pulled.
Clive

They were changed by me about 2 years ago along with a new cooler. Done about 9000 miles.
I've never seen pipes done like that before.
I'm spitting feathers at the moment.

Yet to put battery back on it as it was flat.
When I do, I'll see if damage is done.

I replaced one of mine last year but don't remember if it was OE or Shitpart (I tend to go for OE on anything mission critical) and the crimp is completely different which is what made me initially suspect yours was one someone had made up. 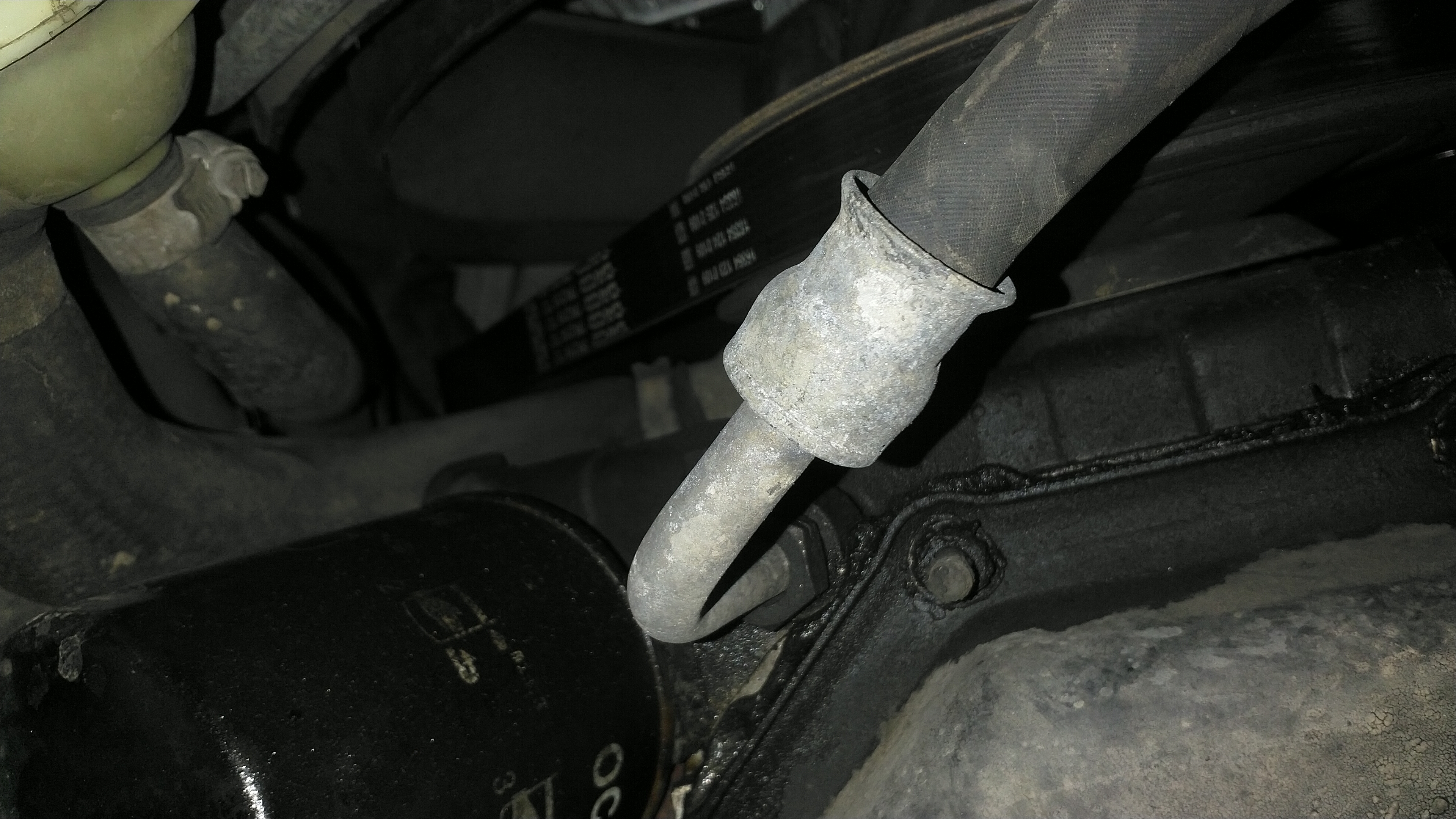 Yeah mine are similar to yours Richard.

Tried to check the receipt but it was an ebay link for Maltings offroad who sold the cooler and both pipes as a kit. Suggests Allmakes4x4 on the listing now, but who knows if thats what it was back then, they were bought june 2020. https://www.ebay.co.uk/itm/272730150024

Put battery on tonight and it turned over and tried starting. Didn't let it run.
Just found a genuine part on ebay. Should be here Friday. Will change it and oil and filter and go from there.

I might take off manifold and squirt some oil down the bores if I can find my spare gaskets.

i wouldnt worry about the bores, its the bearings that need the oil.

If its good oil its amazing what you can get away with.

Official unofficial kid sister lost the sump drain plug on her diesel Disco when pulling into a motorway service station. Oil slick ended just before she parked. Found the drain plug, had it recovered refilled and all seemed well. According to Almer Motor Works at Hatfield that is who were the shower who forgot to tighten the drain plug. Not their first codge up either.

So she found another 4x4 specialist, Romanian guys, (even worse) and swopped the Disco for an L322 'cos she'd lost confidence in it! Disco was still running just fine and made at least another 10,000 miles before we lost track of it.