rangerovers.pub
The only place for a coil spring is up Zebedee's arse.
Bloody coolant leaks :(

Fresh off the back of replacing the head gaskets to fix one coolant leak and a week after a clean MOT where no coolant was leaking the car has sprung another leak!

Bottom right hand side of the radiator and the pipes below that are soaked and it's leaving a large puddle under the car. Over night the level in the header tank has dropped about two inches. 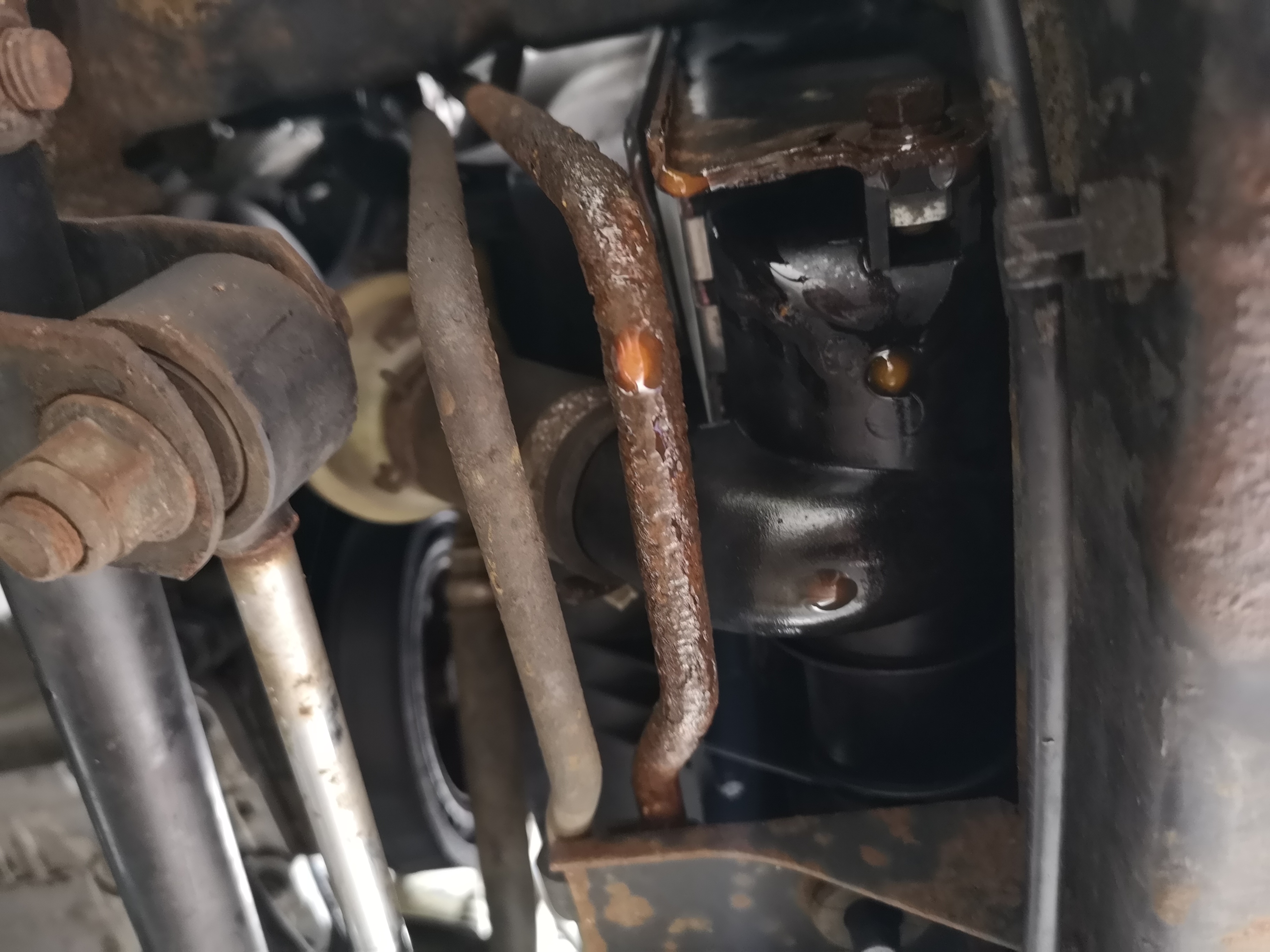 The thermostat appears dry in this image so I don't think it's leaking from there.

The view from the top shows no leak from there and the (brand new) top hose is dry.

So...what lives on that side of the radiator and is located somewhere above the thermostat but below the top hose that could leak coolant?

I'm really hoping no one says there's nothing and it must be a split radiator :(

I've been out and had another look.

I think there's water coming out all over the place.

There's steam coming from one of the exhaust manifolds.

There's water running down the oil filter (again) faster than it was before.

And yes, the water in that corner.

I think I've colosally screwed up my head gasket job :(

:( it does manage to get all over the place... my radiator started leaking from the top tank on the passenger side, but the evidence appeared exactly where you pictured it. Took me a while to find that. Took the radiator out and found the sides of it weren't even straight - it had somehow got a bow in it.

Sucks about the HG though - though that said, while its a bit of a path to get around to the exhausts, are you sure it isn't the lower inlet manifold not sealing properly, or one of the heater hoses etc?

It's possible and preferable as an idea but at this point (it's taken 6 weeks of various set backs to get the head gasket job done) me and the car are on borrowed time at home :P

Time to seek outside help.

Leaking valley gasket wouldn't pressurise the coolant to the point of splitting the radiator though, would it? The radiator was brand new a couple of years ago and wasn't warped when I fitted it. Given that the rad has been fine for a few years I think it's more likely that if it has split it's been done by pressure following a cock up of the recent repairs.

Not that there'll be any pressure build up if there's a serious leak now but at any point following the work have you noticed a lot of pressure (by squeezing pipes etc)? If the rad has gone it'll need a new one anyway and they do seem to go wrong after being left empty of coolant for a while.

If you do have to change the rad, don't refit the two bolts at the bottom. They never line up so put strain on the bottom seal where the core joins the plastic end. Not even sure why the bolts are there, it sits in two rubber grommets at the bottom and is secured at the top. Gravity stops it from leaping out.

The other thing in the vicinity above the oil filter is the feed to the heater matrix from the lower inlet manifold - on a GEMS its a pressed in stub, on the Thor its a metal pipe arrangement pushed in with an o-ring and secured with a single bolt. Those can leak, and could end up coming down the front cover.

Didn't notice any pressurised pipes when bleeding the coolant system.

Drove it around for a couple of days (5 miles or so) before it started leaking as badly as it is now. It might have been leaking slightly before but I didn't notice. MOT man didn't note any coolant leaks either but he did note a slight oil leak at the rear of the engine.

The metal coolant pipe in the front of the engine got a new O-ring when I did the head gaskets, lubed it with Vaseline to stop it snagging as it went back in.

The other metal coolant pipe on the side also got a new O-ring with Vaseline lube too.

Would agree with this - far easier to find coolant leaks with a cold engine that way. Think someone else here recently made one with a replacement pressure cap with a hole drilled into it, and a suitable pump (a bike tyre pump would be adequate as you don't need much pressure there, you just need a way to get it into the pressure cap then).

Would agree with this - far easier to find coolant leaks with a cold engine that way. Think someone else here recently made one with a replacement pressure cap with a hole drilled into it, and a suitable pump (a bike tyre pump would be adequate as you don't need much pressure there, you just need a way to get it into the pressure cap then).

That was me :P

Some investigation is planned for the weekend

Some progress I think. I'm pretty sure I now have a leaking waterpump!

I think the radiator is fine. When I had it running the coolant hoses weren't being pressurised. I think water is leaking from the pump and on to the fan somehow and then dripping in to the bottom of the fan shroud and leaking out from there.

This is it after drying off the area and pressurising the system with my DIY cap: 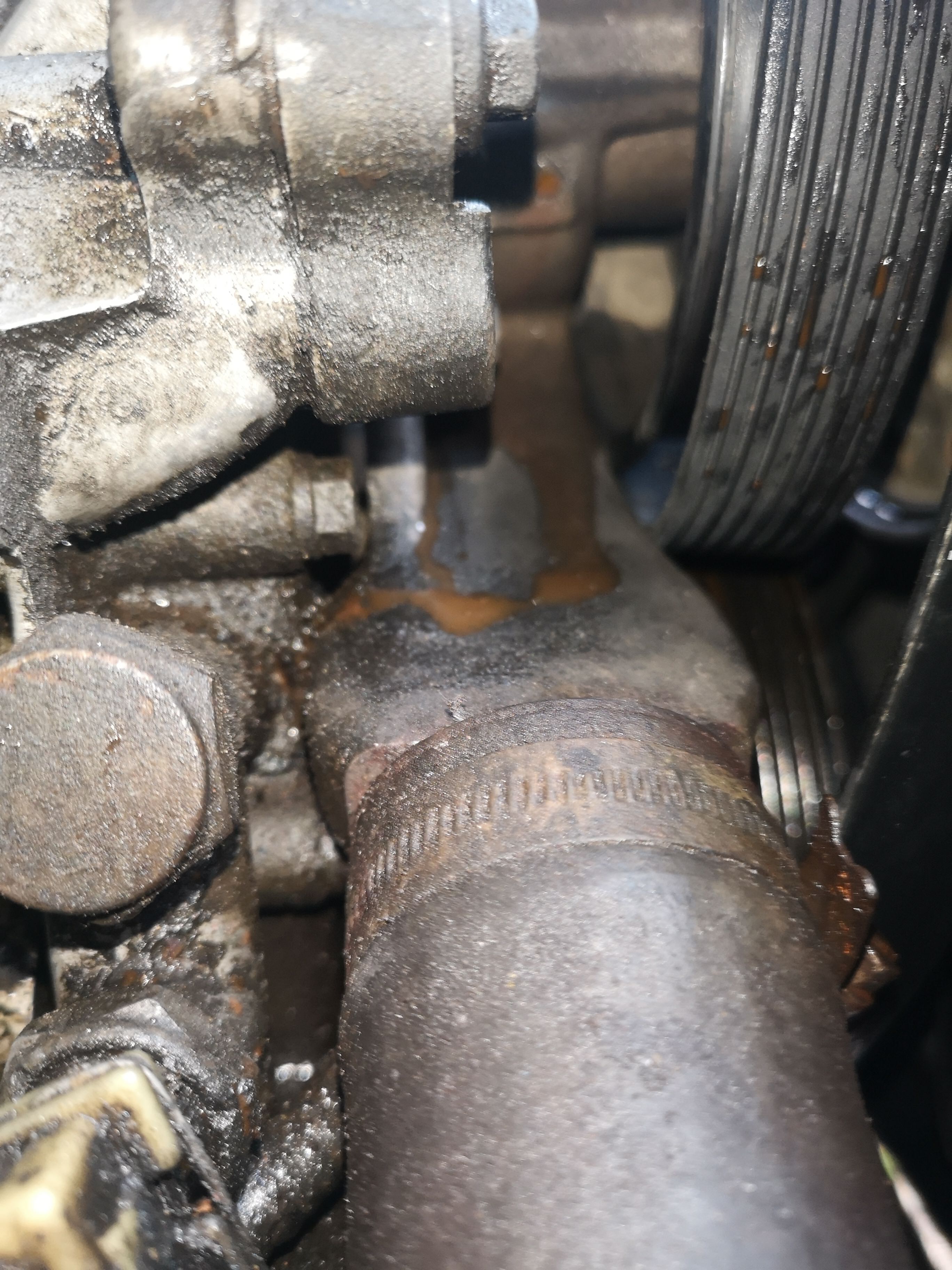 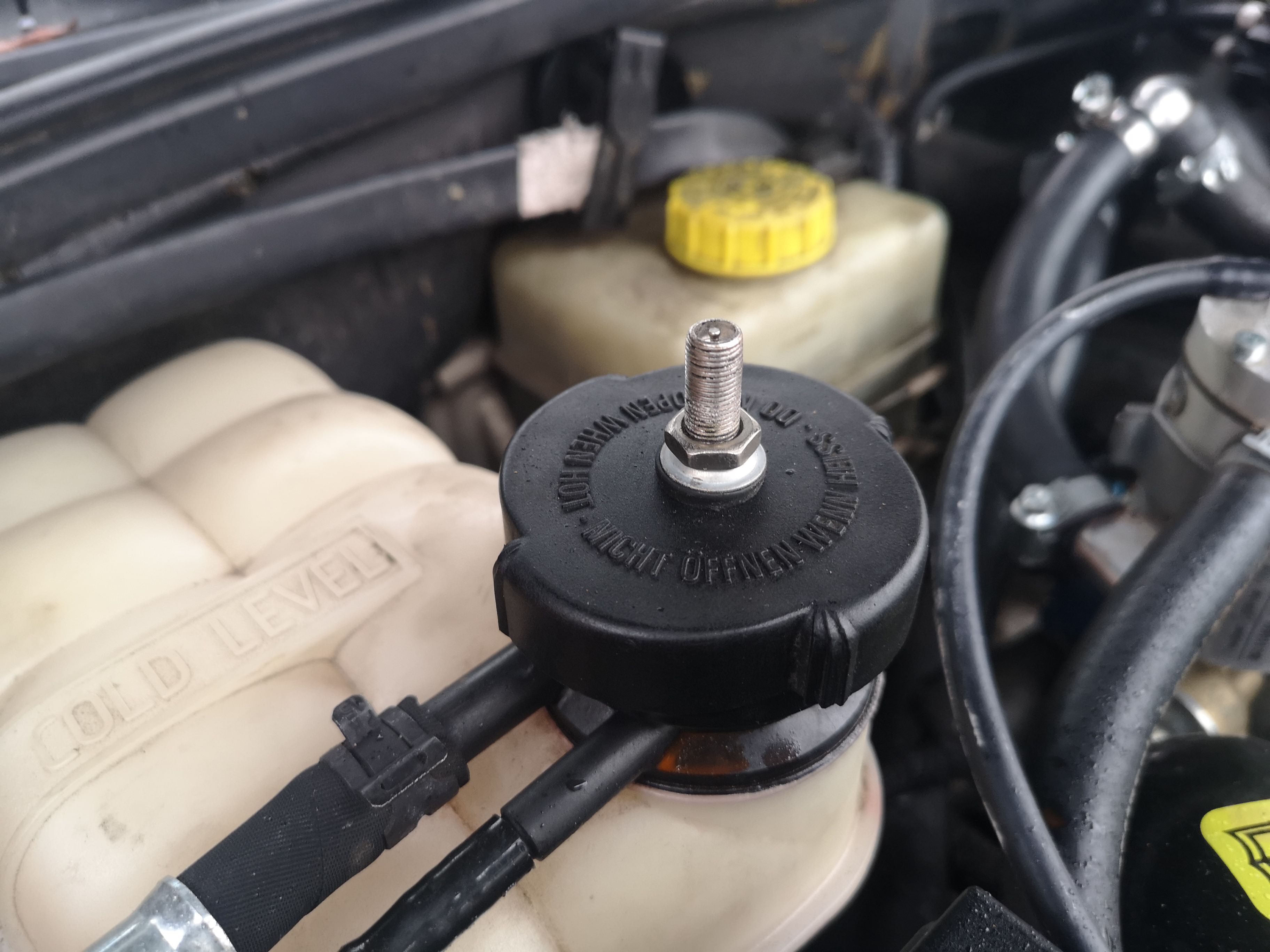 I'm now happy that all the work I did previously was done OK - there's no evidence of coolant from anywhere above the water pump (valley gasket, throttle body heater bypass pipe etc). There's also no route that I can see that would let coolant reach this spot from the head gaskets.

This is a video of it seeping very slowly with no pressure in the system:

This is what the engine bay looks like with it running in this state:

It's hard to tell from the video but it's billowing out from under the rocker cover.

I'm now wondering if the "steam" coming from the exhaust area is actually SMOKE. Specifically, smoke from this: 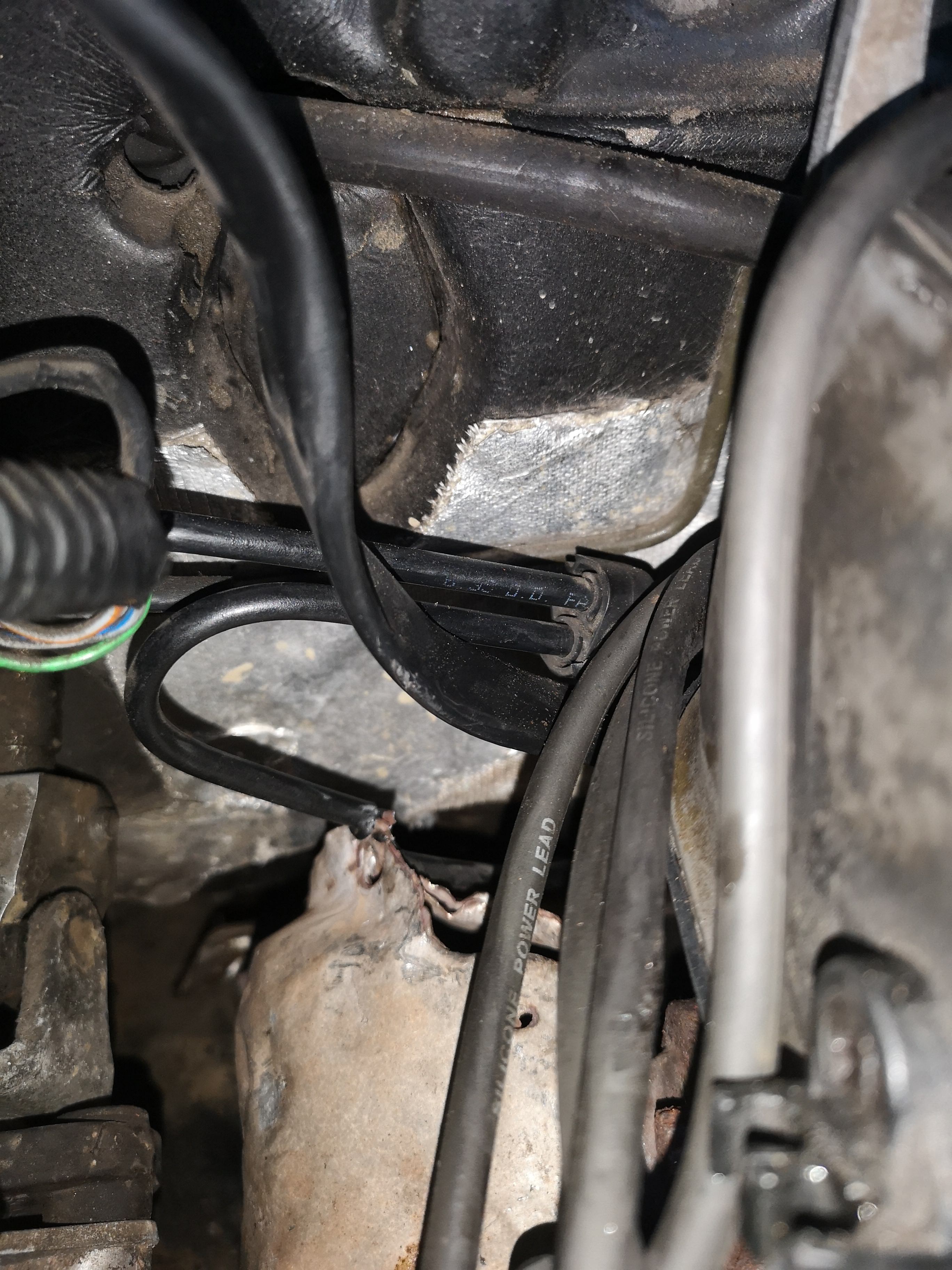 I've clearly gotten something wrong at the back of the engine bay there. That hard plastic tube has slipped to rest on the heatshield, melted through and is now two separate pieces of pipe. Each of them is now glued to the heatshield :(

However, I'm not sure how the smoke from this (if it is smoking) would get from there to billowing out towards the front of the engine.

Anyone able to tell me what they are? My first thought was gearbox/transfer case breather pipes. They look similar to the breather pipes for the fog lights at the front of the engine bay. I'm not sure though.

I would say your guess as right, most likely gearbox or transfer case breather pipes. Move them and cut the ends off so they can breathe or you'll create more leaks. Water pump leaks do go everywhere as the water gets on the back of the pulley so ends up being thrown around. Looks like you've found the problem.

The pipes normally bolted to the head, 8 mm head bolt, as said they are gearbox breathers

I didn't think to measure the pipe glued to the heatshield - anyone know the external diameter?

Hopefully I can join them back together with an airline connector. I don't much fancy the idea of trying to replace the whole pipe down the back of the engine!

As for water pumps, is the Airtex one about the best without losing your mind and paying for a genuine LR one?

As long as you keep them up where they are or higher you should be ok, it’s only if they fall down your start leaking fluid, re pump I don’t know, soz

Airtex are fine. From the picture that looks like only the end of the breather has melted but if it isn't, 8mm inside diameter hose will be fine (left over from doing your throttle heater pipe)

No 2 for Airtex water pump. Fitted one earlier this year. Quality of manufacture looked good and no issues. Can't remember if it came with a gasket in the box tho'.

Ordered the Airtex from Island 4x4 - the picture showed a gasket so I assume it comes with one. Ordered new bolts for the water pump too, just in case.

Just had nose through RAVE and it seems to suggest that the pump can replaced without removing the fan: 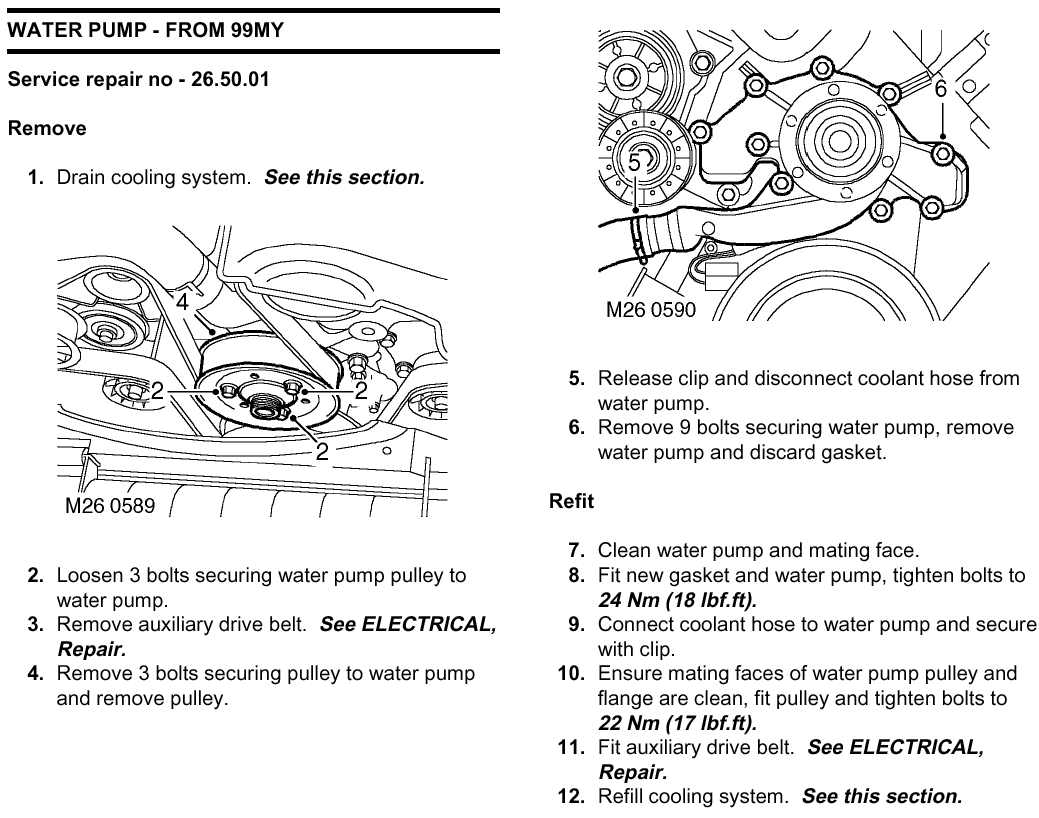 There's no fan shown in the images but it doesn't say to remove it (or refit at the end). If you check the the procedure for the earlier cars it says to remove the fan.

I assume that fan DOES need to come off and it's just missing from the instructions?