rangerovers.pub
The only place for a coil spring is up Zebedee's arse.
Head Unit Swap

Theres a lot of chat on the forums about changing the head unit on a P38 and various issues that it seems to cause, so i thought i'd post my own experience.

My car has the "high level" sound system with three speakers and an amplifier in each door.

I really wanted to add bluetooth for handsfree, and i had a spare Pioneer bluetooth headunit i'd removd from an old car, so ideally i would fit that and job done.

reading online all sorts of stuff, i decided to just have a go myself and see what i found.

First of all i just plugged the head unit in exactly as the original. the 10pin speaker connector doesnt fit, so i made up some short jumper wires to test things out.

This gave the first set of findings. A) the door amplifiers buzz like mad if they are powered but have an open input. For testing you can simply short the two leads in the plug and the buzzing will stop. B) driving the door amplifiers with the "speaker" output of the Pioneer worked fine, there was no buzzing or noise or anything weird, but it was VERY loud. On that particular unit "30" is usually a decent listening volume, and "20" is quiet. With it connected to the P38, 7 was loud, and 10 was rattling the door cards....

As expected, the speaker level output is much too high. Much to be expected, the door amps clearly expect a much lower level input.

A friend suggested i try using one leg of the speaker out from the head unit, and pull the other leg to ground. This is because most modern head units have the speaker outputs wired in a "push pull" fashion with a pair of transistors pulling the signal in opposite polarity. Using one output and ground would thus half the voltage. This worked, and did make it slightly quieter, but it was still too much, and also introduced a hiss (albeit a fairly subtle hiss) at lower volumes.

So i set that idea aside, and instead investigated using the "pre-outs" from the head unit. Clearly this is the "correct" thing to use, its intended as a line level output for driving another amplifier. For testing i cut the ends off some phono leads, crimped on some ferrules and stuffed them into the 10 pin connector on the range rover harness. Hooked it up, and well, it just worked. Nice crisp clear audio, no messing about with resistors and all that mess as posted elsewhere. 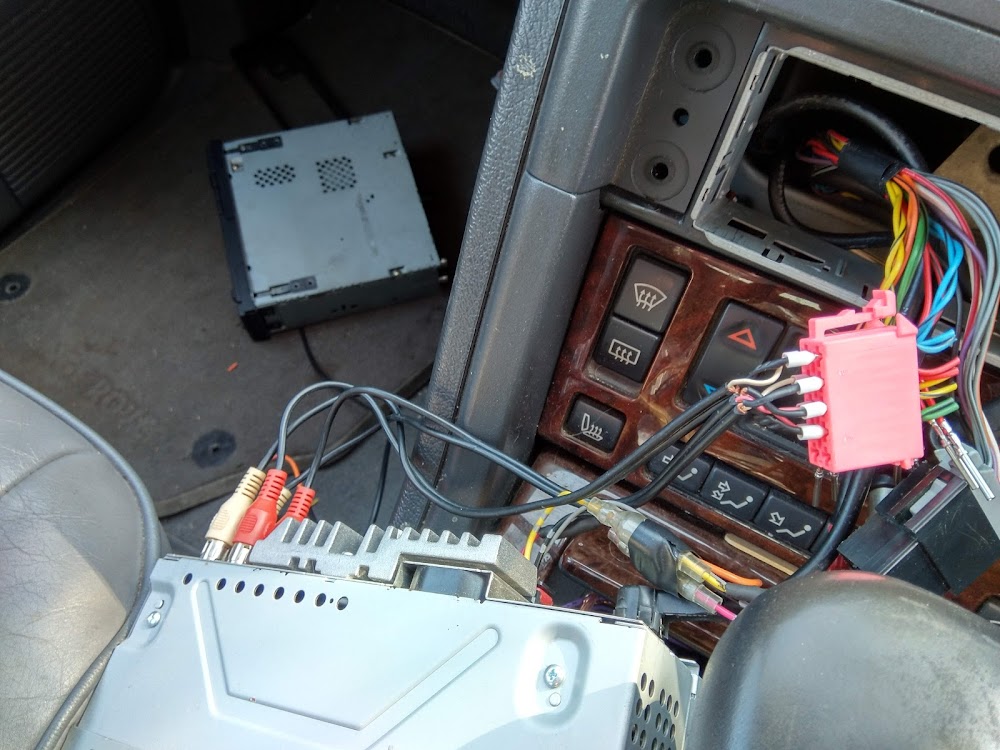 I just needed to make something a bit more permenant without making a mess of the wiring. I initially wanted to get a matching plug for the 10pin connector on the car, however they seem a bit rare and awkward to get hold of, and i was being impatient, so i grabbed a spare Deutsch DT20 series from the box at work and set about with the crimpers. 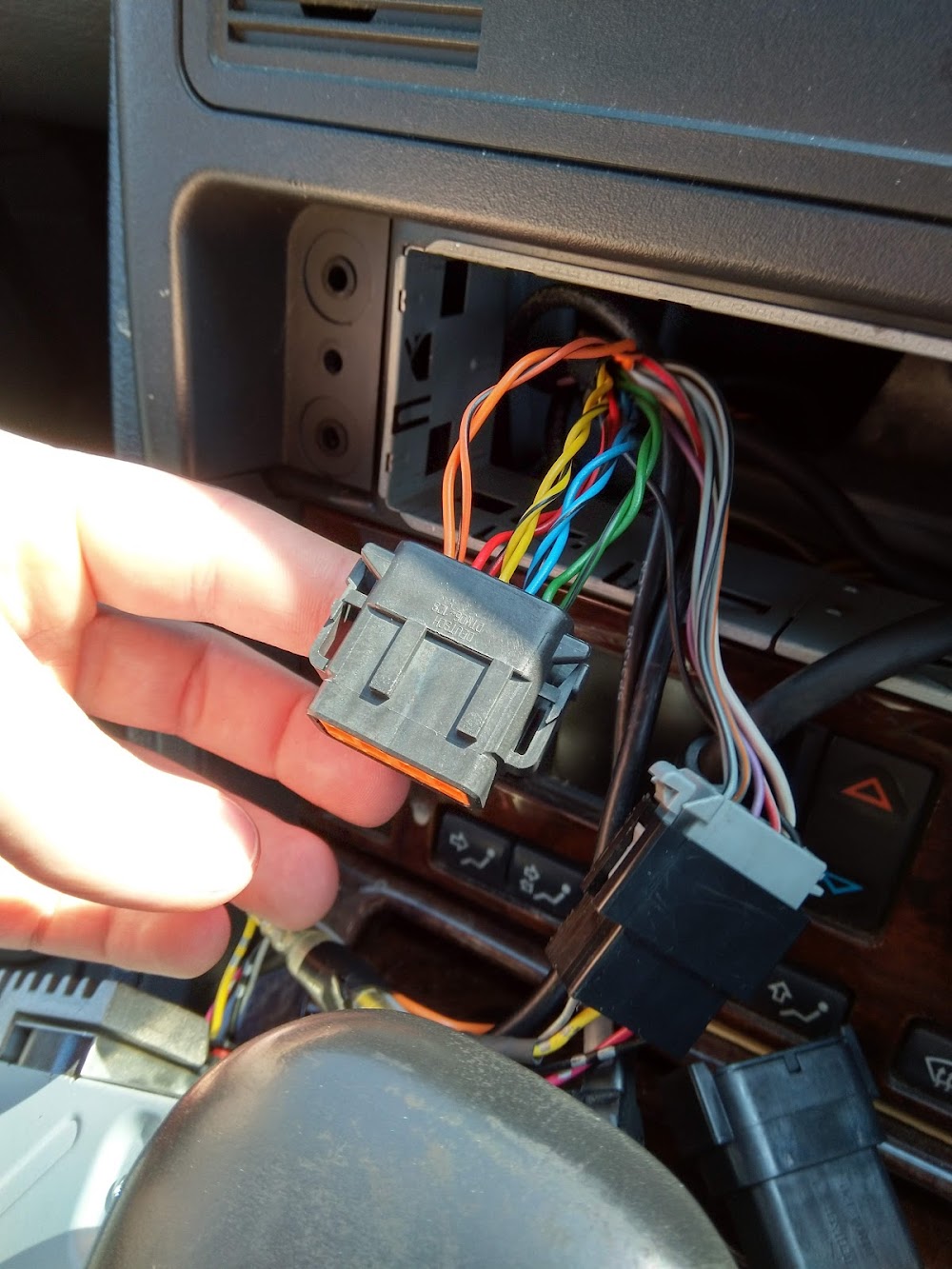 Replaced the car connector with a 12way DT, and made up a lead with a matching socket going to the 5 phono leads. 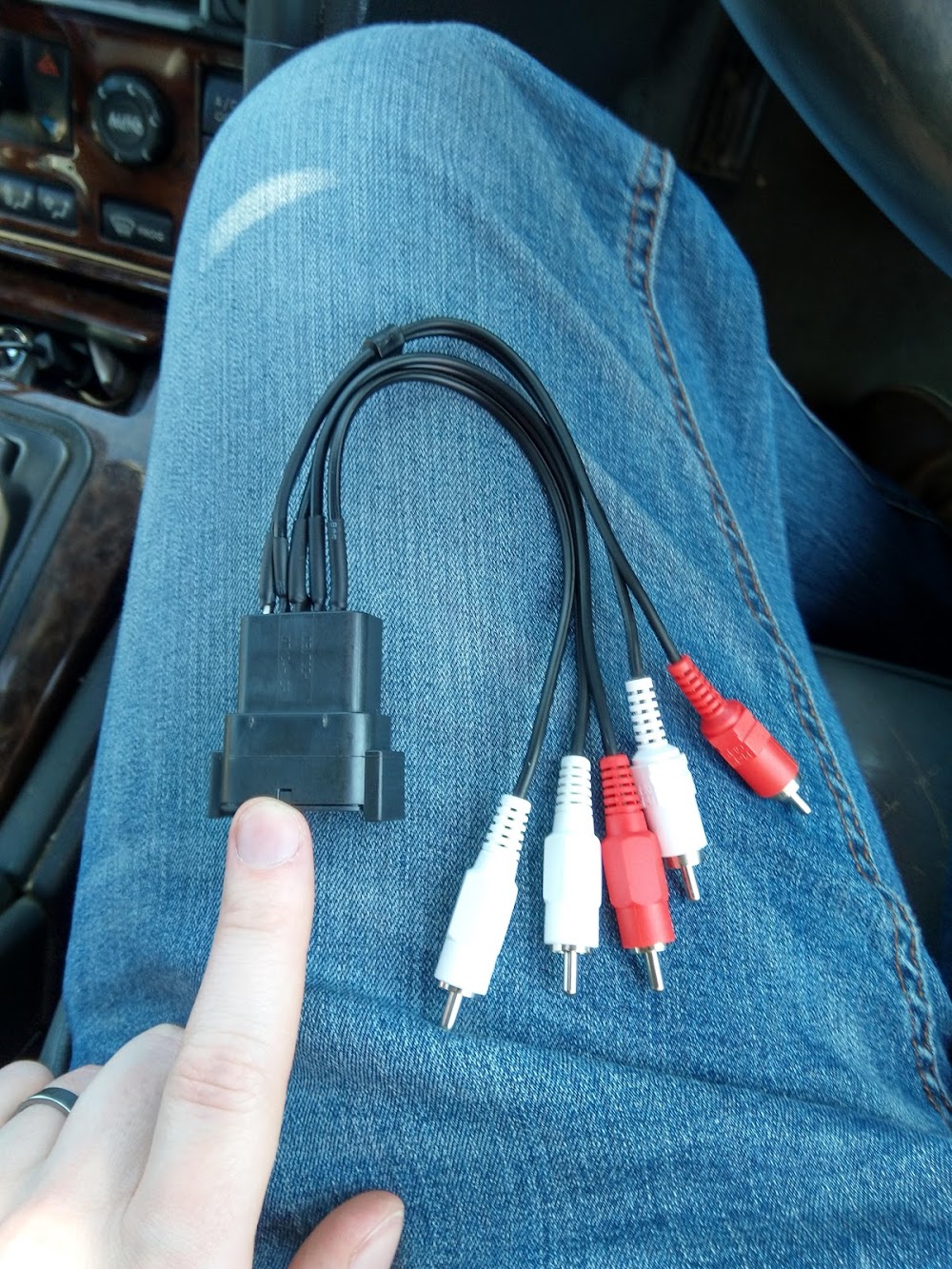 With that done, i had to repin the pioneer power flylead to get it to feed the "remote on" signal to the correct pin to turn the amps on. For some reason landrover didnt use the proper wire for that.

With that lot done and a final test, it all works as expected.

I now need to find a minute to install the microphone for the bluetooth part then i can get some photos of the finished installation.

Oh and i've ordered an adaptor-majig that should let me keep the steering wheel controls, so need to get that working too!

I'd be interested to see if you get any low-level whine in the door amps with it wired like that.

The door amps use a balanced line level input, whereas the pre-outs on head units are all unbalanced. I used the attenutors on mine to drop the amplified output level down to the line level expected by the amps, and it works well, with no noise. I did have my subwoofer hooked up on the sub out of the head unit, and got a low level whine from the woofer.

I ended up using an audio isolating transformer on the sub, which has got rid of the whine completely, but I've also read of people using them on the normal door amp feeds aswell to get rid of any whine that there may be. I went the attenuator route this time, as I found last time I did it with just the phono outs of a head unit that I had whining I couldn't get rid of any other way.

You can get the 10pin connectors aswell on the likes of eBay (too late for your install though :) ) as I got a couple awhile ago to make up attenuator boxes for another owner.

What steering wheel control box did you go for?

Well yep, as it happens things have taken a strange turn.

I had a couple spare pioneer head units, one with bluetooth from ~2014, and one without, from 2011. The bluetooth one was acting very oddly with all sorts of buzzing noises when i tried to get it going. After some investigating, i realised i have blown an internal fuse which grounds the line-out stage. The fuse is there to protect against ungrounded amplifiers being grounded via the phono leads, and clearly when messing with it on another car a while ago ive fried it (i actually remember the phono lead sparking when i connected it!)
So with that one written off i'd ordered a "mechless" 2017 pioneer model off ebay which matches the one i have in my A4, and when i did all the wiring at work the other day pictured above, used the 2011 pioneer for the initial setup. Usefully they all use the same multiplug so i could sort all the wiring out for the 2011 model and just swap the 2017 unit in when it arrives.

That 2011 pioneer works perfectly. The line outputs are ground referenced (0 ohms between the chassis ground and phono shields) as is pretty typical. There is no whine at all. Its spot on. It also has 6 line outs, so has proper sub control.

So today i collected the 2017 model from the post office, and swapped it over thinking i'd be a quick 10minute job... And sure enough, a low level whine appears as soon as the radio volume is above 0.

I ended up spending far too long messing with it. I pulled another 2017 pioneer out my Audi and tried that, which also whined. I also tried a 2014 pioneer that belongs to a friend, which also whines. My android phone does not whine.

So fairly puzzled at this point! Clearly the 2011 pioneer has normal unbalanced line outs, and the door amps are perfectly happy with them. And yet everything else is shite. I asked a mate whos into his car audio and he suspected the difference lies in the fact that the 2011 model is top of the range (back then you had to buy the top end one to get USB input) and the other units are all entry level models, which likely have cheaper components. If buying a better head unit fixes it then i'd do it, but i dont want to spend £lots and discover its exactly the same!! I already fancied a better unit anyway, as i wanted one with seperate sub-out, but i hoped the cheap 2017 model would get it working and i could sort the better one at some point later.

The steering control box is from incartec, not tried that yet, it was also at the post office but given the rest of it didnt work i didnt even look at trying to install it.

And yeh, i saw the 10pins on ebay, but the only suppliers seemed to be in Germany and i was getting fed up with the lack of bluetooth and just wanted it all sorted.