rangerovers.pub
The only place for a coil spring is up Zebedee's arse.
RPM issue

Had P38 sitting for a few weeks after its paint job while waiting for the time to get her ceramic coated. Battery dead as a door nail. Started after a charge and a jump.
Driving to detail shop at 65MPH I was doing 3100RPM. She seemed to be accelerating through the gears fine but I never felt her drop to the final gear. Pulled over and started again but no change. Didn’t have an issue before I parked her up.
Question to forum, could the high RPMs be a result of a dud battery? Anyone have experience with this issue?

Low battery voltage will cause a Gearbox Fault message to come up on the dash and if the gearbox ECU detects a fault it will go into limp mode, not use all the gears or cause the torque converter to lock. The final gear is actually the torque converter locking up, if you count the changes you'll find that although it has a 4 speed box, there are 4 changes making it appear to be a 5 speed. The other time it won't immediately lock up is after a cold start. I've noticed that I can start the car from cold, drive off and after a couple of miles it will appear to change up a gear when travelling at a constant speed. I mentioned it to Ashcrofts and was told that is normal so maybe it was still cold?

I can't speak in detail specifically about P38s like Gilbert but I also don't see it being wrong. A lot of automatics with torque converter lockup won't lock up the converter until the gearbox is above a certain temperature. Some will lock the TC in gears as low as 2nd if gearbox temp is too high. Only really happens on autos controlled by an ECU that switches electronic solenoids that control flow of trans fluid (some only do this for the TC). After having the battery disconnected or clearing gearbox related error codes some take a while before they start to lock the TC again. Some autos that are purely controlled by an ECU and electronic solenoids will both refuse to lock the TC and shift gear weirdly/harshly until they have effectively re-learned to shift gear properly, what they are actually re-learning is overlap between turning off solenoid(s) and turning on other(s) which equates to learning how much fluid needs to be shifted to engage clutch packs etc, they want the gearbox to be fully up to temp for the learning and the gearbox will warm quicker when the TC isn't locked.. Even if the ECU only controlled TC lockup (not shifting) might expect it not to lock up if the battery has been dead for a few weeks. Even locking the TC can be too harsh or too soft. On some electronic controlled autos you can read figures from the gearbox ECU relating to how long the solenoids have to open before a clutch grabs and when that figure is high it can point to clutch packs nearing end of life. I've had lots of fun with Chrysler Grand Voyager autoboxes lol.

It'll lock the converter on mine after shifting into 3rd as well.

3100 seems a bit of a weird speed though? i'm sure thats too low for third, but too high for 4th even with an unlocked converter?

The converter wont lock when its cold. Takes maybe 5-10 minutes of driving on a motorway on a cold day to get the converter to lock.

Perhaps the later cars with the smaller converter simply rev higher with it unlocked, and it was infact in 4th, but hadnt locked the converter due to being too cold?

Also, you can easily tell the converter is unlocked by varying the load on the engine. Dont lift off completely, but if you cycle between say 20% and 60% throttle you will see (and hear) the revs rise and fall slightly if its unlocked.

If its locked the revs wont change.

Just been out in mine and tried dropping down the 3rd at 65 mph, revs run at around the 3,100 that James experienced. According to RAVE, if the gearbox ECU detects a fault while the car is stationary, limp mode is to stay in 3rd gear or if it detects the fault while moving, it stays in 4th. Kickdown and the Sport button won't work either.

Gearbox Fault when starting is usually a sign that the battery is low (voltage drops below 10V while cranking) so that would put it into limp mode and as the fault is detected while stationary, it would only use 3rd gear.

Boy, this is timely. I have been wondering what rpm I should be running at 55 mph. I am always running 3K at 55- was thinking I should be running about 2500 rpm at 55. I am getting about 16.5 miles per gallon so I have not spent too much time worrying about it. But now that Jim is saying he can run 65 mph at 3100 rpm and is worried then I think I may have an issue with my gearbox.

I am thinking about going down to third gear and see what it does--- and then try Sport mode. I know I am in normal mode since the dash just says D and the gate light is not on.

Can't remember the actual revs but just over 80 mph is 3,000 rpm, I use that as my normal cruising speed in Europe (better quality roads than in the UK, 81 mph speed limit and very little traffic). If you are revving to 2,500 at 55 mph, then that sounds like you are staying in 3rd. What do you mean by the gate light not being on?

What I mean is that "Sport mode" light is not lit up on the Manual/Sport button located on the shift gate--so I know I am in normal mode. I also have a plain D on the dash panel rather than an S if I was in Sport mode.

So do you think I should shift to 3rd from drive and see if the rpm change?

If I am not shifting into 4th what does that mean? I have not seen any faults with my Nano-- perhaps I have missed the fault. What module would I find transmission faults?

If I do have a fault and clear it I am not sure that would do anything if I have an underlying issue--any idea what that issue could be?

Pretty crap picture as it's getting dark and I was in danger of running into the back of someone driving at 55 mph on my favourite bit of test road..... 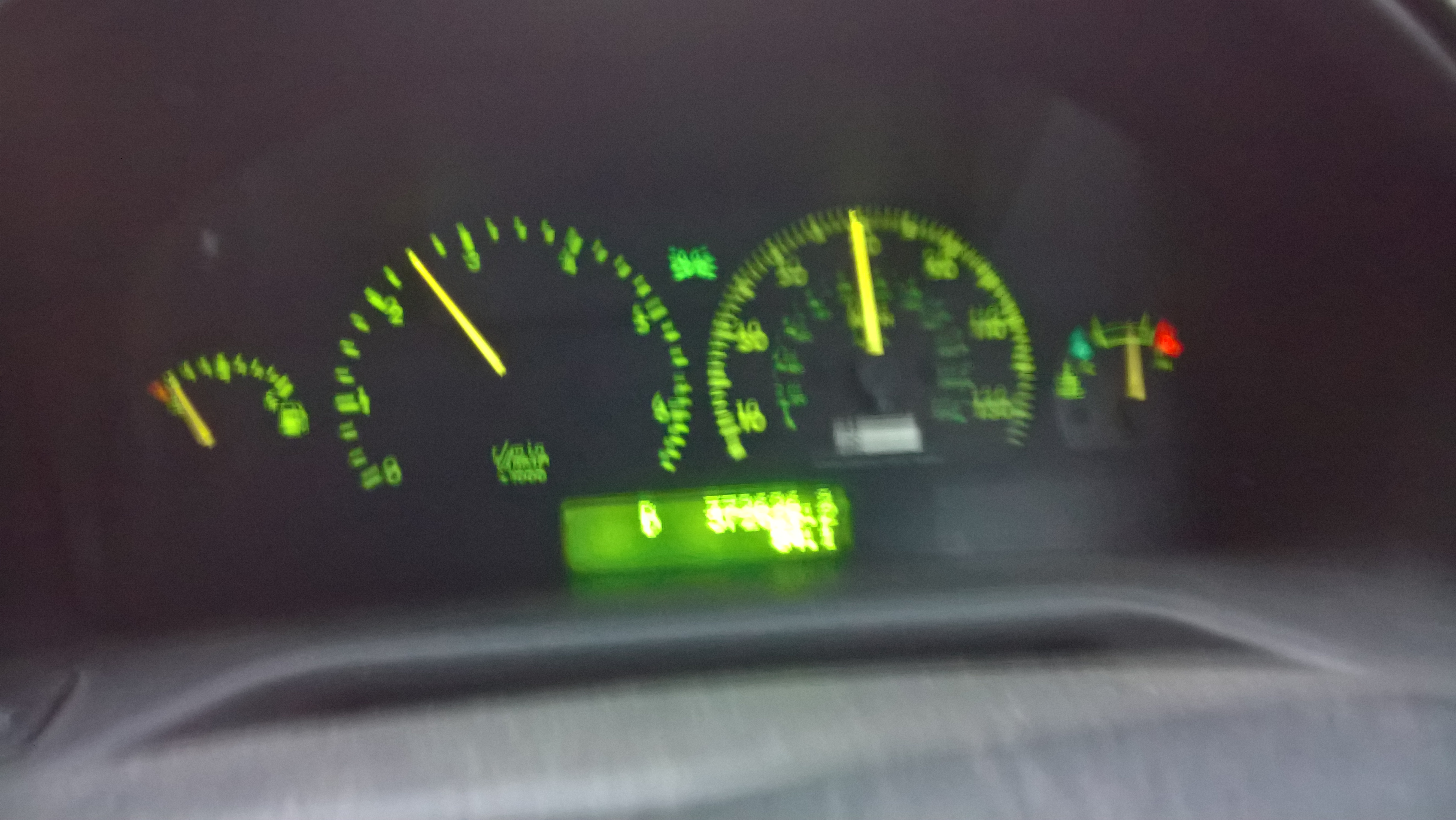 As you can see, 2,500 rpm is 70 mph. If cold, the torque converter won't lock up so the revs will be higher but not as high as you are running at. Sport only has an affect under acceleration holding the shift point to higher up the rev range but once cruising the revs will be normal.

Went out and put my foot into it and got it so I could feel some shifting going on--normally I am a feather throttle just to save gas. This time I went out to three-mile stretch with no hills very close to my house so she was not fully warmed up.

I also got up to speed more rapidly than I normally do in the Crate--I could feel shifting and the rpms drop down -by the second mile I got it to do 60 mph at about 2200 rpm. Sounds like it is now in the ballpark when not fully warmed up. Not sure if putting my foot into it as I pulled away from a stop or what caused it to act more normal. In my case, this is abnormal because for the last few months I always saw 3k at 55 mph.

I know that most of the time up here in the mountains I am going up and down steep hills so I seem to always see 3K at 55 even when I am going downhill or even when I hit a fairly level straight between hills- which does not last too long. I wonder if it is the hills that keep it in 3rd and when I get to even a long (say 3 mile) straight it does not wish to shift up to forth.

I only went to a very local flat stretch near my house so perhaps putting my foot into it and not going up a hill made it react more normal.

I will know this weekend where I will be traveling through the mountain roads- see if it gets out of third gear.

Problem solved.
I pulled the battery, charged it on a slow charge, put it back in, took vehicle for a test drive and alls right in the world of RPMs.
But..... it being a P38, she wasn't happy to be all fixed and running so it decided to blow an oil cooler line as I pulled into driveway (I’ll take pulling into driveway over it going on highway 200 miles from civilization). Threw oil all over engine bay and driveway like the Exxon Valdez. Fortunately, I happened to have a donor P38 and 45 minutes later we are good as new.
From my experiences on these P38s, a lot of issues can be addressed by making sure your battery is good.