rangerovers.pub
The only place for a coil spring is up Zebedee's
Who makes good coolant hoses?

Still chasing the occasional, and sometimes not so occasional, water leak where the hose from the water pump enters the thermostat housing. Only seems to happen during cool down after the car has been parked up for a while. So presumably a pressure build up on the engine side when the stat is closed.

So far its had new hoses, albeit a while back, changed clip from the spring thing to an up-market Mikalor stainless steel band and bolt affair and finally fitted a new OEM thermostat last week just in case it was a minor crack in the plastic housing.

When changing the thermostat housing I did think that the hose was little slacker on the stub than I'd ideally have liked but still within the range of what a clip ought to have tightened up. Seems to me that modern hoses are slacker on the stubs than what they used to be. The hoses I used came as a full set from a reputable supplier so should be OK. Don't recall blue bag packing but may well have been Britpart. I notice that the visible end of the top hose where it goes onto the radiator shows little coolant spots about where the reinforcing cords might be. Something I've not seen before.

Seriously thinking in terms of paying the Green Oval tax and getting a factory hose. At £35 a pop it ought to fit properly but thats a lot of money for a hose. Any suggestions for a cheaper fix. Leak sealer in the coolant or rtv round the stub would probably work but both are bodges.

I hate to be the harbinger of potentially bad news - but mine did exactly that... no leaks while running and hot... but when it cooled down, it would pick a hose joint and leak from it. Tighten it up, and it'd move on to another quickly enough. Mikalor clamps, silicone hoses - nothing would put an end to it.

Fast forward a year or so of this... and I start getting a miss on #6 at startup. Pull the plug and its rusty. No coolant galleries around #6, which can only really mean one thing. Must have been such a small amount of coolant getting in though as it never steamed excessively, nor did it burn its way through lots of coolant. It did need topping up - but then it was leaking as it cooled down so to be expected.

I've waterglassed the block - which for now - has held up. No more missing at startup, no leaking after it cools down, no loss of coolant. I hope it holds until I can work out what to do with this RR or its engine when funds allow.

Wholly anecdotal - but the 'cooling down and leaking' thing is a bit coincidental. I'd never come across that happening either before, and it wasn't until #6 started acting up that I really could pin down the problem. It didn't seem like I had excessive pressure, because while running, it never leaked. 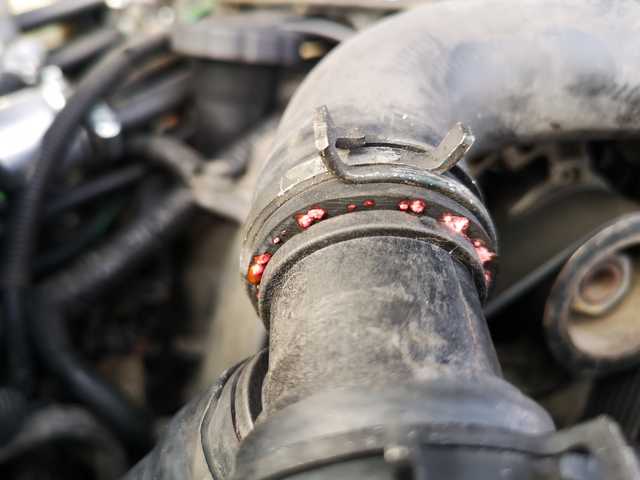 This was a brand new hose sometime late last year. I've no idea what's causing the coolant to seep out through the threads. It makes me concerned that there's a break in the rubber somewhere on the inside of the hose.

Nothing more serious than what's shown in the image so far though.

I'm pretty sure it was a Britpart hose in the end. There didn't seem to be a wide variety of brands at the time. IIRC it was Britpart or genuine LR. I'll dig out the invoice later and check to confirm.

The weeping at the threads seems to be a trait of OAT coolant, and I'd say is normal, and nothing to worry about. In my quest to solve the leaking problem I changed a number of hoses, all did that but none had splits etc on removal. I have no idea how it manages it...

The thing is, every car I've ever owned has used red OAT coolant and I've never seen any hoses on those do it. Even the hose that I took off and replaced with the one in the photo didn't do it.

It seems to be that there has been a recent change in the way hoses are made - either materials used or the design of them. Perhaps they're using thinner layers of rubber for the inner surface of the hoses? Perhaps, like a lot of other "rubber" parts, they're not using real rubber or are using less of it?

The tailgate straps are good example of this. The ones they left the factory for more rubbery than the ones you can buy now. One of mine snapped a couple of years ago - the metal strap inside rusted and snapped after 16 years but the outer rubber was intact. The outer "rubber" on the one I replaced it with was very plasticky and felt different. The outer creased and ripped open after a few weeks.

Admittedly, the only cars I've had with the pink/orange OAT have been P38s, which do like a good leak now and then :) Perhaps better quality or original pipes have or used to have the ends vulcanised, so the cords/threads aren't exposed?

On mine, even some of my silicone pipes have evidence of the weeping. It is very odd.

I know what you mean about the tailgate straps though... I put on a new Bearmach set a few years ago, and the 'rubber' tubes on these snapped on both sides within months.

I think it's more a case of not using proper rubber these days. A couple of years ago I replaced the steering arm with a genuine Lemforder and by the following MoT the boots were splitting. They seem more like vinyl than rubber.

Looks like RutlandRover sneaked a picture of mine when my back was turned. Exactly the same.

Its just this hose that has the problem so hopefully no deeper seated issues. When I got the set I thought that both ends were too slack. Waterpump end got a jubilee clip from the start, no way would my crappy (is there any other type) waterpump pliers would grab the spring clip thing at any permitted angle of attack. Even then it needed tightening shortly after installation. Both ends way, way looser than what came off. Frankly I almost kept the old hose but that had obvious evidence of old age.

Rubbish boots seem to be the norm these days. Mr MoT man complained about them not lasting between MoT tests. Apparently customers get upset when advised that the new ones they fitted after last years test have also given up.

Talking about rubbish I've decided that after a lifetime of moaning its time to sort the waterpump plier thing once and for all. LiDL had some this week at £2 a pop. Basic arms are quite nicely made but the sliding pivot thing plumbs new depths of craphood. I got a couple of pairs and will weld filler pieces into the slots then drill and tap in 3 or 4 places for a screw in pivot. A touch more fuss to use but at least it will stay where its put. Allegedly the expensive, £20 - £30 + versions actually work but am not spending that on a tool that might get used twice a year.

This is the tool I have for spring clamps - makes it far easier fitting/removing in all sorts of odd places: 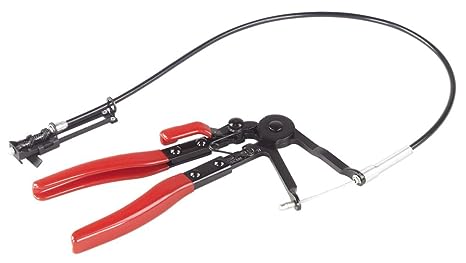 Properly sized spring clamps are, in my opinion, far better than jubilee or mikalor clamps when there isn't an underlying excess pressure problem...

Turns out my hose was a Bearmach one, I'm unfairly blaming Britpart in this case!

I have a set of lots of different hose clip pliers from Amazon. IIRC it was £15-20. Might be worth looking for something like that. It also includes a hooked spike for releasing the stuck on hoses once the clamps are off.

Like Sloth I have one of the flexi cable spring clip removers. Got specifically to deal with that pesky water pump end connection "next time". Used a jubilee clip when fitting because that was all I had. That end is till working fine.

We shall see how things go when the genuine hose arrives. Start with spring clip as that was what the factory used.