rangerovers.pub
The only place for a coil spring is up Zebedee's arse.
Hevac display bulb

Slowly working my way through a few electrical problems on the car. Blown fuses .... now fixed and found to be the door mirror wiring.

Next is Hevac LCD panel which is dead and then my DAB aerial showing a fault on my (Kenwood) radio.

The Hevac unit: Checked the bulbs. Centre one had blown so fitted another one. Put 12v on one of the other bulb holders and they all light up except the middle one behind the panel. Had a horrible thought later about polarity so I hope I haven't damaged anything.

Decided to do the mod to the panel connector while I was at it. Marty, who is away at the moment, kindly posted one on the way to the airport. Thanks Marty. I followed instructions and took it all apart on the bench, cleaned everything and put it back together. Back in the car, I used Faultmate to test the unit. Everthing checks out, controls, switches etc. Everthing works, however the display panel still won't light up. I shone a torch through the bulb holder and the panel is working. The display is really clear and much better than it was. No loss of pixels.

Problem is the bulb, which I tested as ok, does not light up when in the holder. Any ideas where to look? I have got a box of new bulbs on the way.
I tested the bulb holder contacts in the car to see if there was power on it and there doesn't appear to be. Could this be a component fault?
If I can't solve it I was thinking of soldering a couple of thin wires to another bulb holder and fitting an LED behind it.

Island do a kit of a complete set of HEVAC bulbs (https://www.island-4x4.co.uk/bulb-heater-control-unit-jfc102550b-p-4953.html) and the one behind the centre of the display is different to the others. I've found that with some of the bulbs, you need to give the contacts a bit of a tweak so they make good contact with the circuit board.

I already have a set of bulbs on the way thanks.
I just tested it on the bench again. I put +12v on pin 6 on the white plug and pin 4 as the earth. All the bulbs light up except the display bulb.
The tracks for the bulb are also not showing any voltage.

Radio fixed with a replacement DAB aerial, so that is one positive today.

Which DAB aerial are you using? If it's one of the stick on glass ones, you need to tell the Kenwood to supply power to it. I use one of these https://www.halfords.com/technology/car-audio/stereo-fitting-accessories/autoleads-magnetic-dab-antenna on the back of the roof (just in front of the top of the tailgate) but I was fortunate that plod supplied me with a hole with a grommet in it already to feed the cable in above the headlining.

OK, the HEVAC display bulb is driven differently - it is actually -ve switched via a pwm signal from the instrument cluster.

From memory it comes in on an Orange wire, and if that wire is connected to ground, the display should light at full brightness. Normally it will dim when you adjust the cluster lighting level with the dimmer switch on the indicator stalk, hence being controlled differently to the rest of the panel lights, which are switched by +12V on the Red/White wire (along with the other switches etc).

In theory (and again from memory)... with the HEVAC screen bulb disconnected, you would see 12V at the side closest to the center of the HEVAC permanently, and the -ve side of the bulb is controlled via a couple of components a transistor and diode? maybe?

If you are getting 12V to the lamp, but nothing on the other side with the orange wire grounded, then there are a few places that I have seen issues.. once or twice I've seen a fault in the components that drive the -ve side of the lamp, but most of the time it's a bad through-board connection over near where the ribbon cable comes onto the front panel. I've managed to repair pretty much all of the iffy front panels I've had on my bench though, so it shouldn't be a write-off for the whole unit just yet :)

It is a stick on glass type same as the original. I have got the same Kenwood radio as you after you recommended it last year. And yes, it was turned on in the initial settings. The new one works, the old one doesn't, so something has gone wrong with it.

Marty, there must be a fault on the HEVAC board. I do not see +12v to the display bulb. The -ve side seems ok.
As a bodge, I have run a +12v lead from the other bulbs and it works. The only problem is the HEVAC panel only lights up with the lights on.
I couldn't find an ignition live feed point inside the HEVAC.
I am going to turn on the daytime running lights in the BECM (just the sidelights) as a way to get round it. Longer term get a spare JFC102550. I have two older AWR5051 HEVAC units as spares which could be fitted at a pinch with the aircon clutch relay mod. 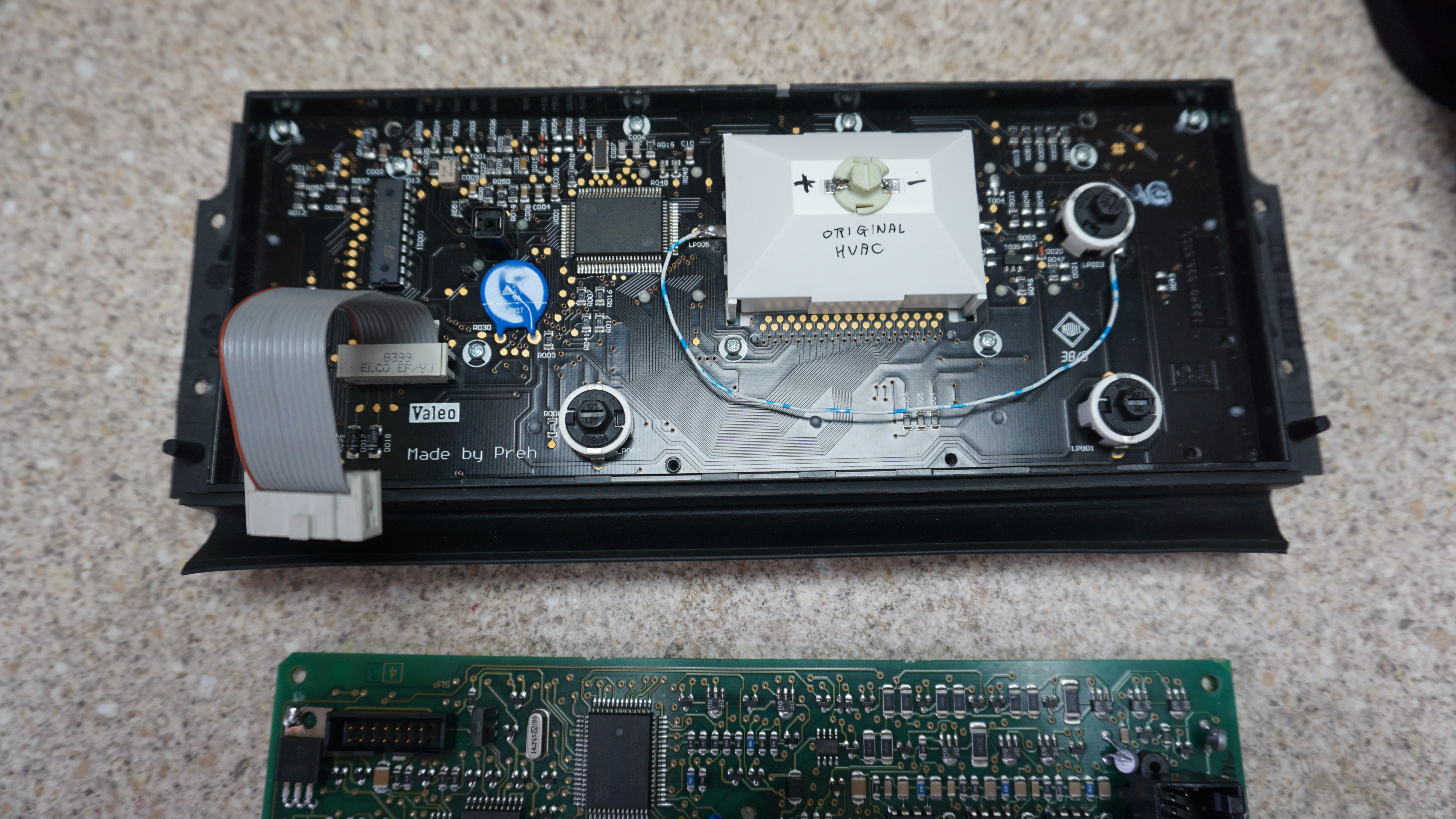 Thanks for everyone's help. I am moving on to the next job.

There is an ignition switched positive on the bottom board - as that is how I repaired the backlight failure on mine :) That was before I talked to Marty and found he knew what the fault probably was. I haven't done anything about it though as it works as is- it just means the display doesn't dim if I were to dim the rest of the dash lighting.

Hi Sloth, thanks for the info.

My idea to have the daytime running lights on to power the panel was not very satisfactory. It only came on with dipped headlights and the panel lights were dim anyway.

I have just gone back and taken the HEVAC apart for about the 10th time. There are two ignition feeds coming in on the white plug, position I and position II.
Pin 3 is ignition position II, so I have just soldered a wire from underneath the board where pin 3 comes through and taken that to the panel and hey presto it works!

Ah, maybe it's the 12V which is PWM controlled via the components to the other side of the HEVAC bulb.

Hope this helps someone in the future...

Thats interesting, Marty.
I compared the boards visually and the face panels as you call them do look identical.
If the difference is just software, it is a pity we can't just flash new firmware. Ha Ha.
I need to get a spare JFC102550. Maybe a cheap one on Ebay with a faulty display and swap boards. 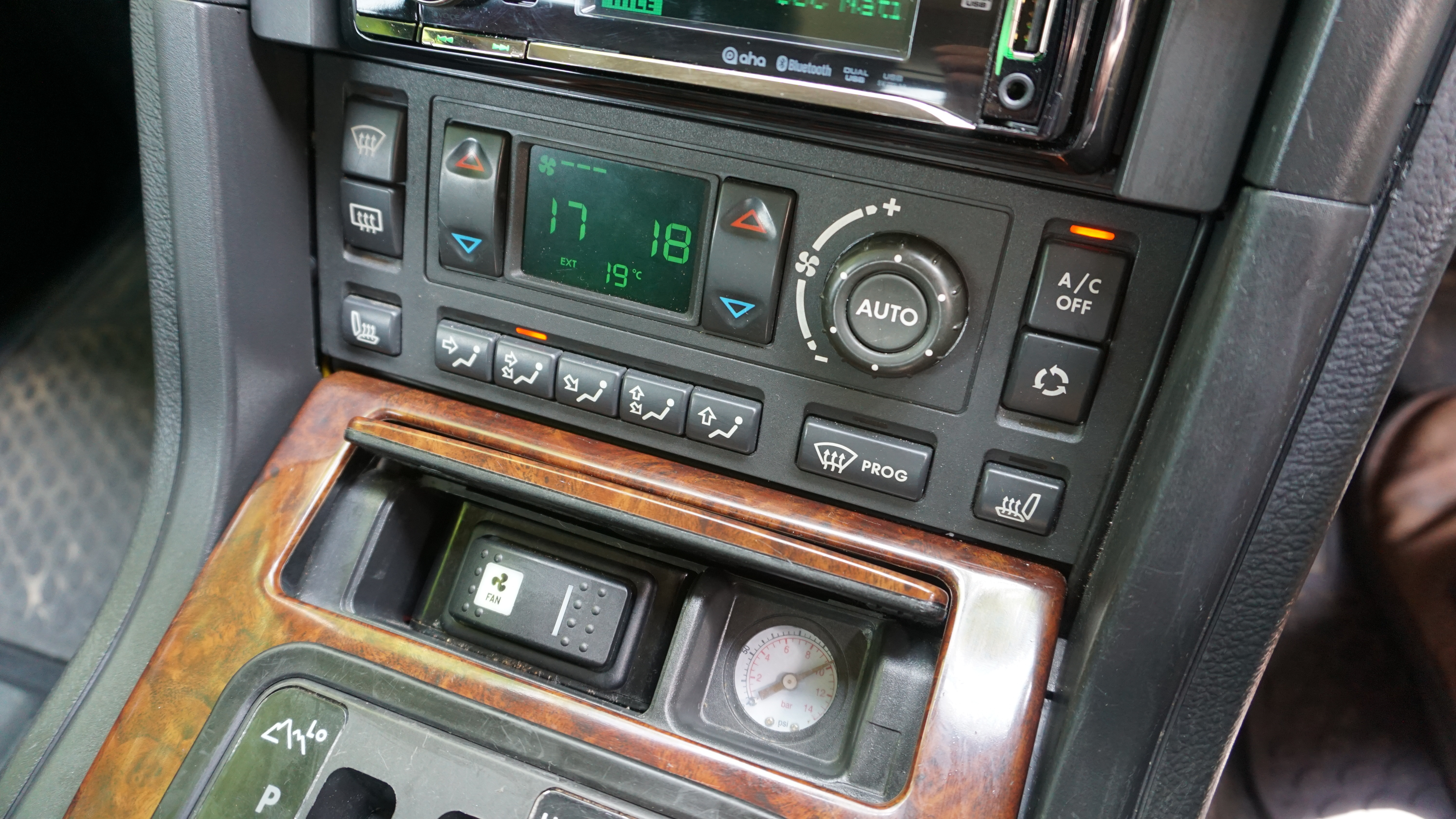 Anyway, it is working and all back together.

I think the issue is actually on the front panel board, as that is where the dimming is done - there's a transistor and zener diode from memory just to the RHS of the display (as you look at it from the back - so the -ve side of the screen as you have marked)

I need to have a look at one of the face panel PCB's I have here to be 100% sure though - I'll try and confirm at some point... but if my theory is correct, then the issue is most likely on the face panel you have - so you could swap that with one from one of the AWR5051 units you've got, and just do the screen connector on that.

I'm still pretty certain the fault will be one of the through board connections on the face panel board. I've seen it a couple of times before - once it was the dimming wire, and once it was possibly the switched +ve feed. I'll try and update once I've had a chance to probe one of the boards here - but I'd say that it's entirely possible that the one you have there is repairable too, but swapping it for another one is probably just as much work...

Yes, it appears that it is just the firmware which is different across the model years.

Dave there is something wrong with your HEVAC mate. Where is the book symbol that is standard? ::laughing:

1999 P38 DSE, Navy Blue
Call sign "Rommel" as it's built like a panzer and has a German engine

It's obviously been affected by the missing pixels fault so it's there but doesn't show up.....

The book symbol returns as soon as I start the car. It seems to clear when I reset the ignition. Ha Ha.

Aircon is next job to do. I need to fix the aircon compressor clutch first. I need to make up a plug and lead to test it.
Front of the car needs to dismantled though. Grill, slam plate, radiator, intercooler, fan and surround. Then I can get at it. 1hour tops.
Then test for leaks and finally get it gassed.