rangerovers.pub
The only place for a coil spring is up Zebedee's arse
Shift interlock solinoid

Aloha,
On a roadtrip to So California ........
just had an event at petrol station. The shifter was locked in park.
I was able to convince it to work, but now fear it may play up with wife driving.
the other side had a recent thread on best way to disable the interlock......now sadly missing.
In a nutshell, what is the best way to get going again when this happens?
I know it is an electrical issue rather than mechanical. The message center said lh brake light bulb failure at the time it happened.
possibly the becm got confused?
thanks,
Tom

I actually just removed mine completely. Solenoid and all. Of course, that won’t help too much on the side of the road. After getting into mine.... I believe if you remove the window switchpack, the shifter knob, the shifter surround and the plastic gear indicator with the MODE switch, you’ll have access to the solenoid pin with a long rod or thin screwdriver to push it out of the way to engage the gears. Since the pin is not energized by the magnet assembly, there’s only a lightweight spring holding it in position so it doesn’t take much force to push out of the way. Assuming yours is LHD like mine, the pin and solenoid are on the driver’s side of the shifter gate. 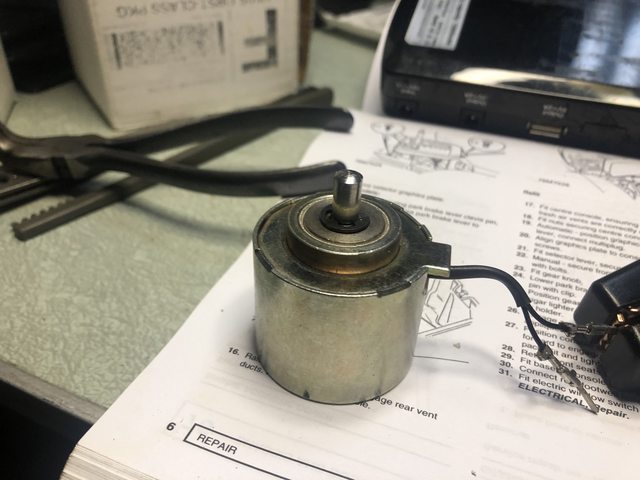 Yep! that's the fix.
I can get into it here in the morning.
It was odd......the message center gave me a false message about the brakelight..... it is fine, but it will occasional tell me it is out.
Simultaneously, it locked the shifter. Hopefully Richard can enlighten us as to the common issue affecting both?
Seems like a wire-is-loose kind of problem affecting the becm....maybe?

More likely a failing brake light switch if it is telling you that the brake light bulb has blown. There's two switches in there dealing with the brake lights, shift interlock and a feed to the ABS system too. However, only NAS cars have the shift interlock, none of the others do, they rely on you having to lift the front of the lever up to allow it to move. When I suggested removing it completely on the other side to convert a car to rest of world spec, RRTH told me I was being totally irresponsible as it would be easy for dogs, kids, etc left in the car, to knock it into gear.

We found my brake lamp switch had been pitted over time to the point one of the switches used for the ABS was not making contact properly, but the other was. So I had intermittent erroneous brake lamp faults pretty much always accompanied by ABS faults.

Still... I'd be doing away with the solenoid too! Easy to knock into gear? I mean, my cat can open doors... I'd like to see him shift from park!

Thanks.
Seems I noticed the 3 amigos stayed lit a few seconds longer than usual last night after dinner.
they went out as I braked at a roundabout........Said to the missus: Now thay's odd.... the abs lights usually go out much sooner.....
Like many things with these beasts, they give you subtle warnings before stranding you in the dark.
Ignore them at your peril!
Does the shift solenoid come out from the bottom or top?

No idea, never having worked on an NAS spec P38 Ive never actually seen the shift solenoid. I once found a picture from Microcat showing the difference between NAS andf ROW but damned if I can find it now. I think I even posted it on the other side but as search no longer works, chances of finding it again are pretty remote, although I did manage to find this https://www.rangerovers.net/threads/shift-interlock-removal-with-pictures.52362/#post-418826

Once you have the whole console and everything removed, you have the take the top half of the metal shift gate off. Then the solenoid is able to be pulled out from the top. There is a black circular metal tab/spring that you pop out and then it’s free. The two black wires can then either be snipped or if you use a jewelers screwdriver at the connector you can pop the pins and pull them out without cutting things up.

Thanks for the timely advice.
I was able to dig down the necessary 3 layers to get the little bugger out. No problems at all. About 45 min job all up.
As it was apart, I used the opportunity to test the Hvac controller and radio head unit I had recently purchased from the wrecking yard.
(Radio good, Hvac very bad)
Now that I think more about this little time bomb, I should have done it years ago! Talk about something stupid
that can strand you somewhere at any time! I may just do the Borrego to save someone else the possible headache.
Gilbert, I now recall the thread you sent fully....I also recall laughing at Toadie when I read it! Thanks for refreshing my memory.