Yeah, it was hard to get any sense of where the hissing was coming from. I was at the back of the car, and I could tell it was ‘driver’s side’ - but couldn’t be any more precise.

I dislike working with brakes and brake fluid, but I suppose there’s not much more involved than syringing as much as possible out of the reservoir and then sticking lots of blue roll around it to catch any residual fluid when levering it out? I am wondering about the accumulator. If it’s the original it would be 22 years old by now, but I’ve no way of knowing whether it is or not.

Can I come at the suspension question from a different direction and focus on the behaviour at the back. With new Dunlop sensors, just calibrated, new air springs, I’d have expected the back to behave perfectly - not rising up beyond the target height, jigging up and down, and then dropping down to the bumstops. Could this also be linked to the valve block? I can’t see what else it could be unless there’s a problem with the ECU?

I must admit it didn’t occur to me last night to check whether there were any errors showing on the Nano.

Same here, I hate getting brake fluid on my hands, it's horrible stuff. Good job my sister-in-law works at a food processing factory so grabs a box of latex gloves for me every so often.

It certainly sounds like problems within the valve block. Leak on the inlet, outlet, diaphragm or non-return valves can all cause odd things to happen. Check all 4 corner outlets first though.

I turned on the ignition again and the ABS pump ran for about 10/11 secs. After another little bit, turned the ignition on again and it did the same. A problem with the bleeding, or the accumulator?

Might be a problem with the bleeding or it could be internal leakage in the ABS modulator. A car that I worked on seemed fine yet the ABS pump would run for a few seconds every so often with the ignition on. Pulling the reservoir off and found rust particles where it fitted in. Cleaned it out and refilled with fresh fluid and it was fine.

Have I ballsed up the valve block rebuild when I did that a few months ago?

Quite possibly I'm afraid. It sounds like you have a leak on both front valves. The usual cause of internal leaks are the really thin O rings that go around the base of the solenoid plunger tube not seating properly. There is an easy way to check them without taking the valve block out again though. Pull the pipe out that goes to the air spring and lever the collett out. with your tyre pump, fit the tapered thing intended so you can blow up inflatable toys and shove that into one of the holes where the pipe went. Then switch on the pump and watch the gauge. If there are no internal leaks the pressure will rise steadily up to about 80psi (or whatever the pump can manage) then switch off the pump. Keep holding the tapered thing in the hole and see how quickly the pressure drops away. If it is good, it will either not drop at all or will only drop very slowly until you get bored holding the pipe in place. If the pressure only rises slowly and doesn't hold, you've ballsed it up and got an internal leak.

I had made a couple of other posts along the way about the sunroof, the dreaded heater matrix O rings, and most recently about the seat wiring, but there's been other stuff happening too. 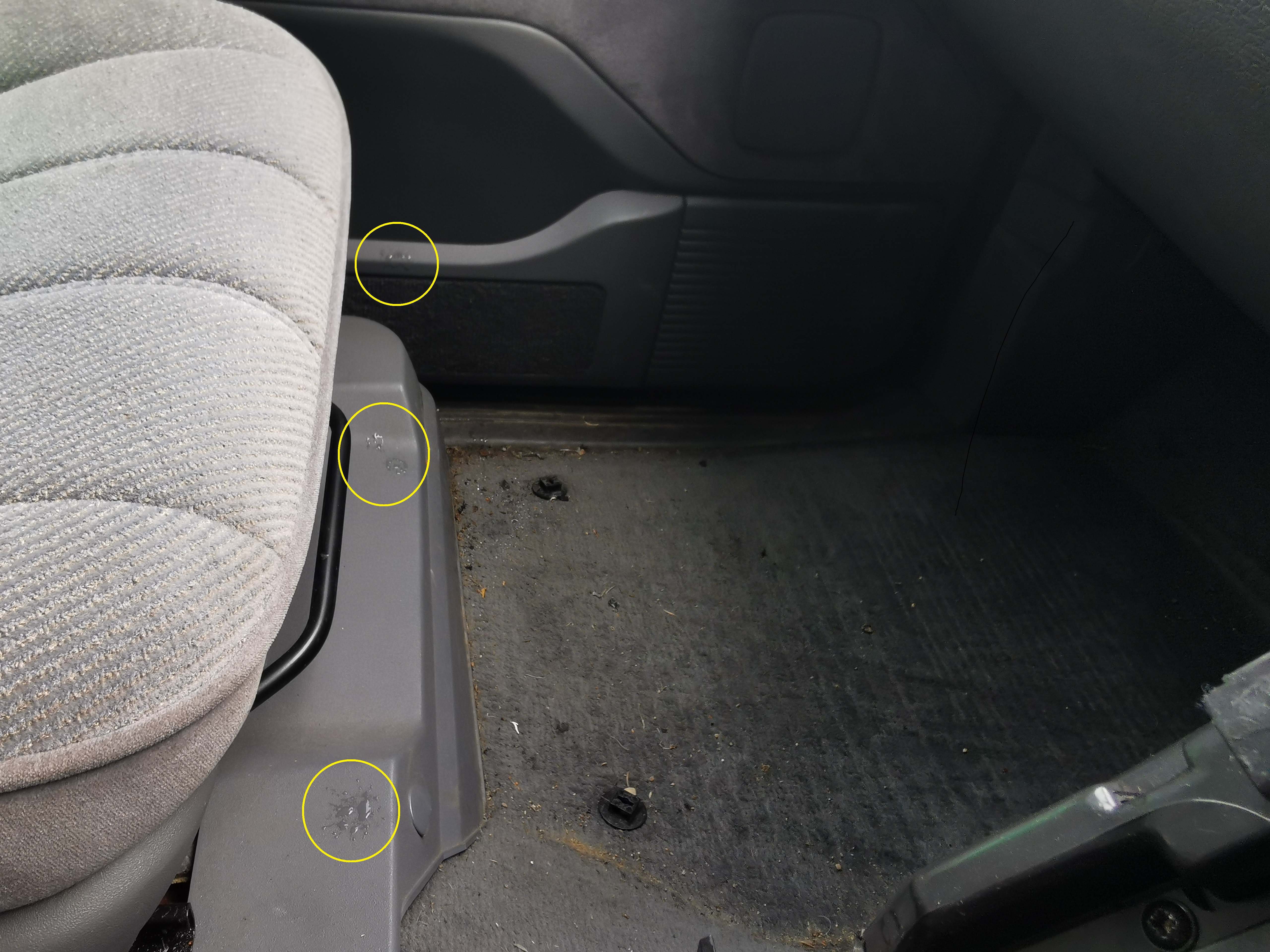 It seems/seemed to be coming from right down at the top of the windscreen frame - there's a slight 'dimple' or opening on both sides, and it seems to drip from there. This is the driver's side: 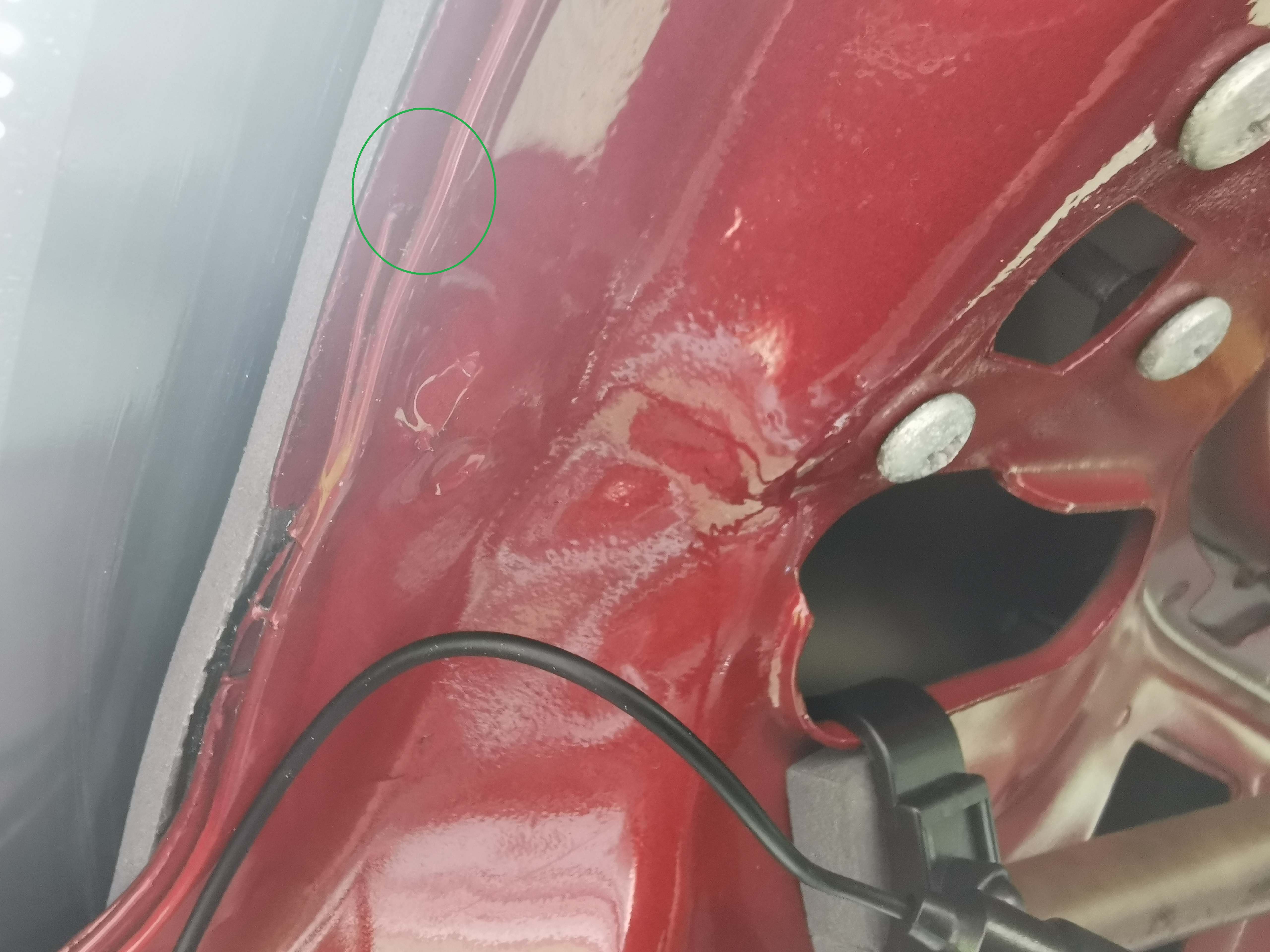 This is the passenger's: 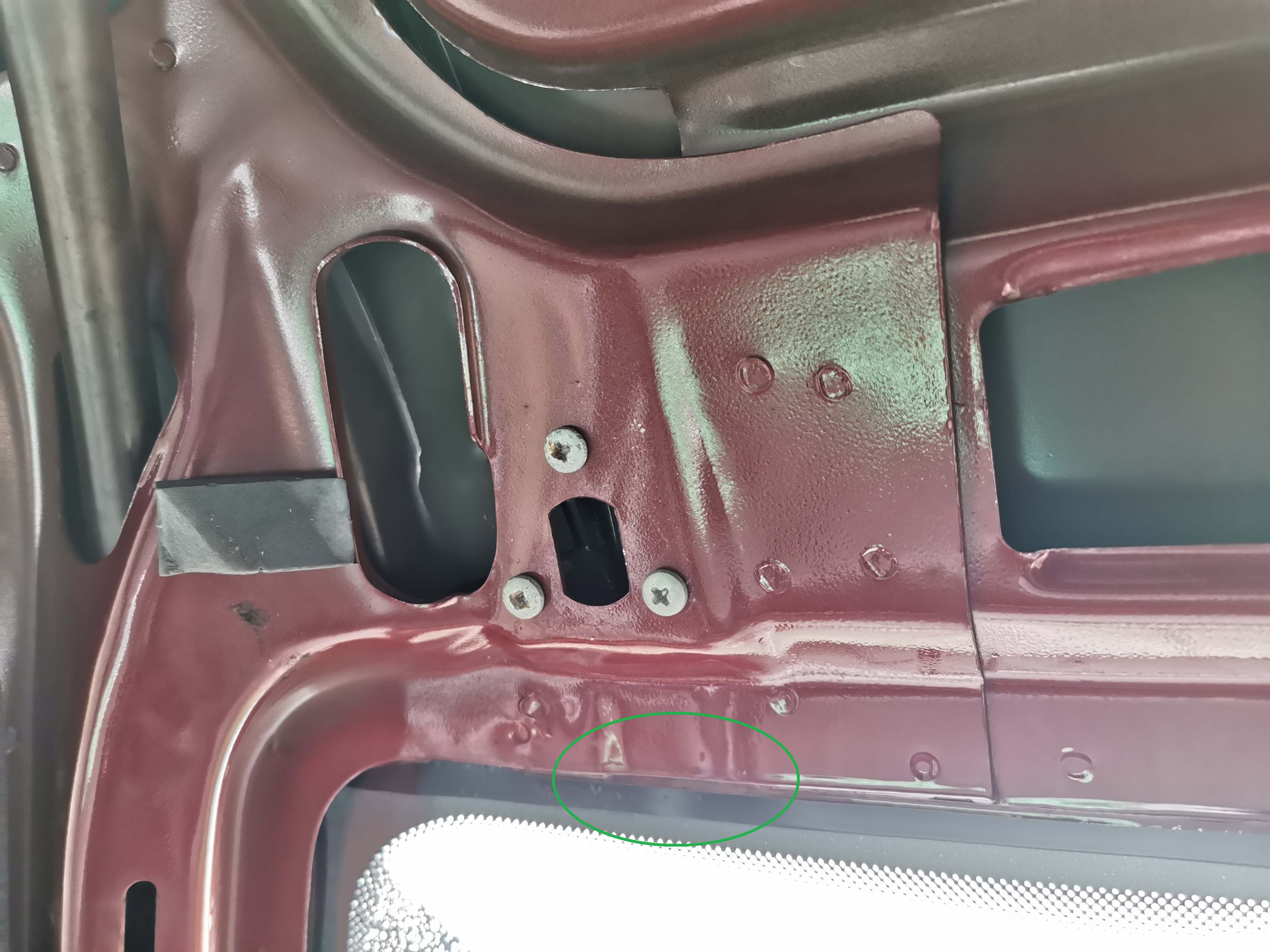 Notice the lack of roof lining - I'm just not keen to go to all the hassle of refitting it until I'm as sure as I can be that the roof or sunroof is near enough waterproof.

Along the way I also had a bit of work done on the rear wheel arches. I've realised I don't have 'before and after' pics - this is half-way through. As I think I've said before, I "could" do this, but welding, filler and paintwork really isn't my thing: 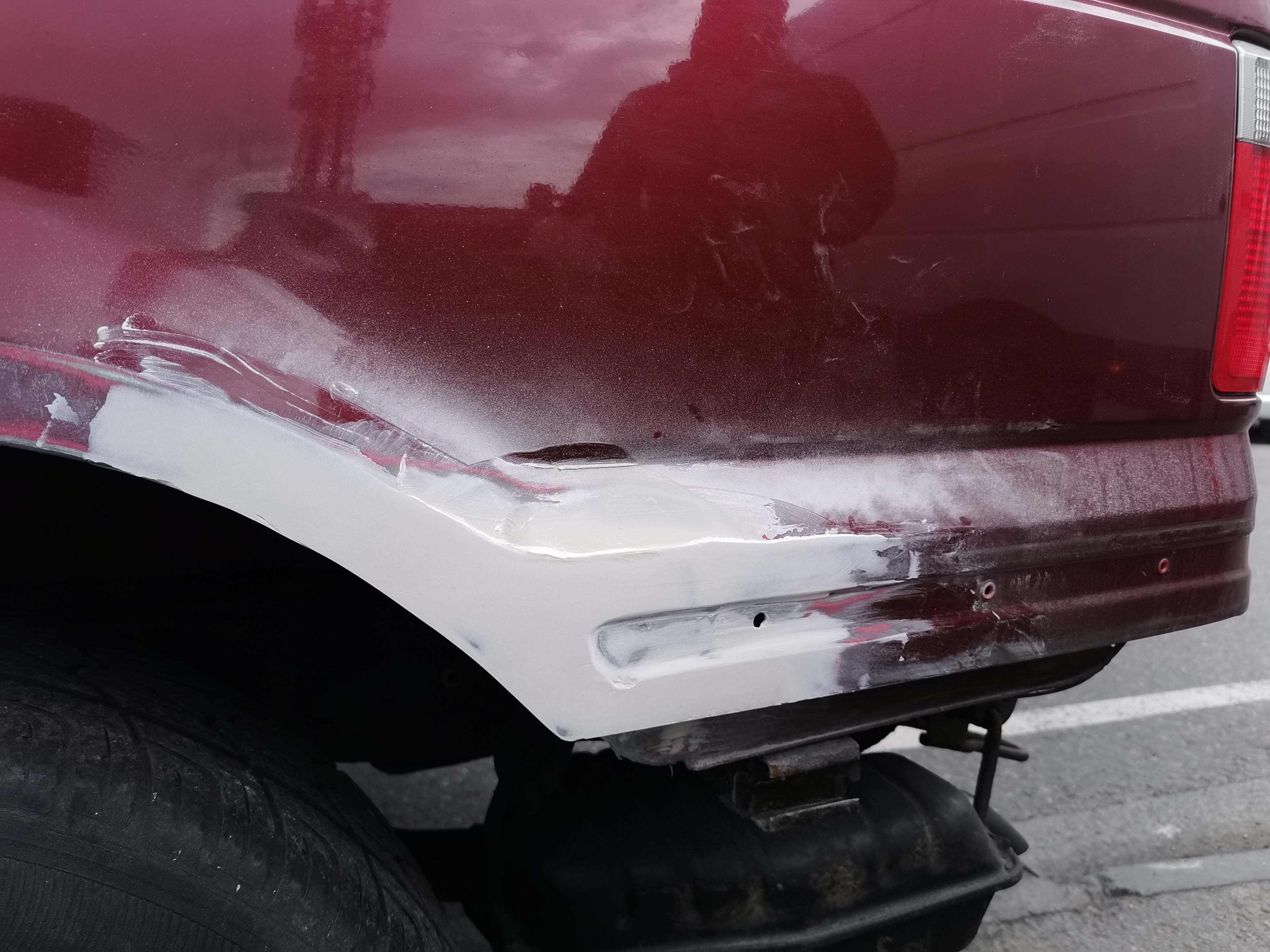 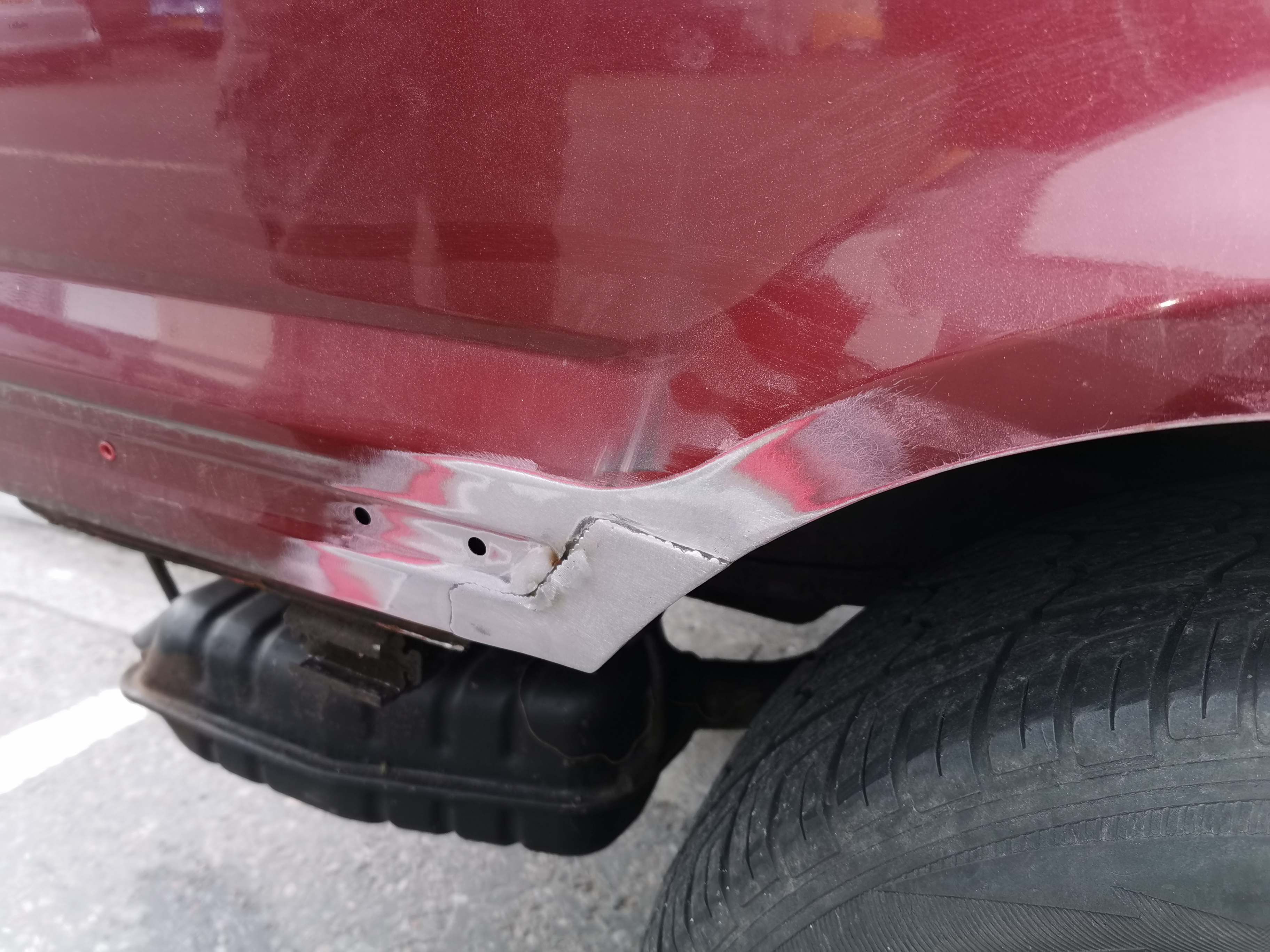 When he was doing the job, the guy at the bodyshop said he'd done another one recently and was expecting much worse. He also said that the sills were in really good nick, so that's nice to know. They also did an underbody lanoguard treatment, which might help keep some of the salt away.

On the other hand, I helped them out by taking off the rear bumper... it's definitely past its best. It's back on the car, but 'hanging by a thread' might be the best description. Not sure if these internal metal frames are available, or switchable? 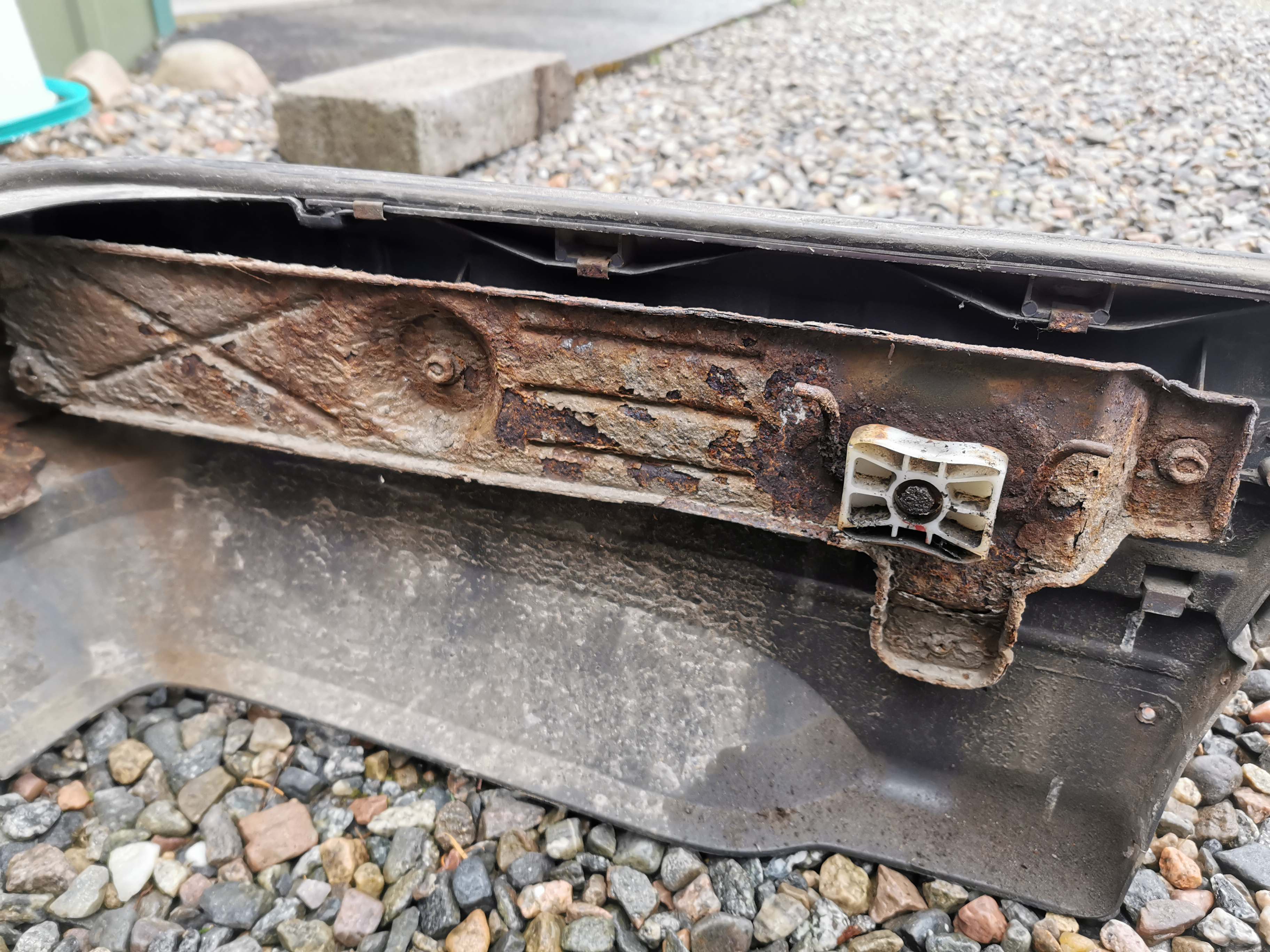 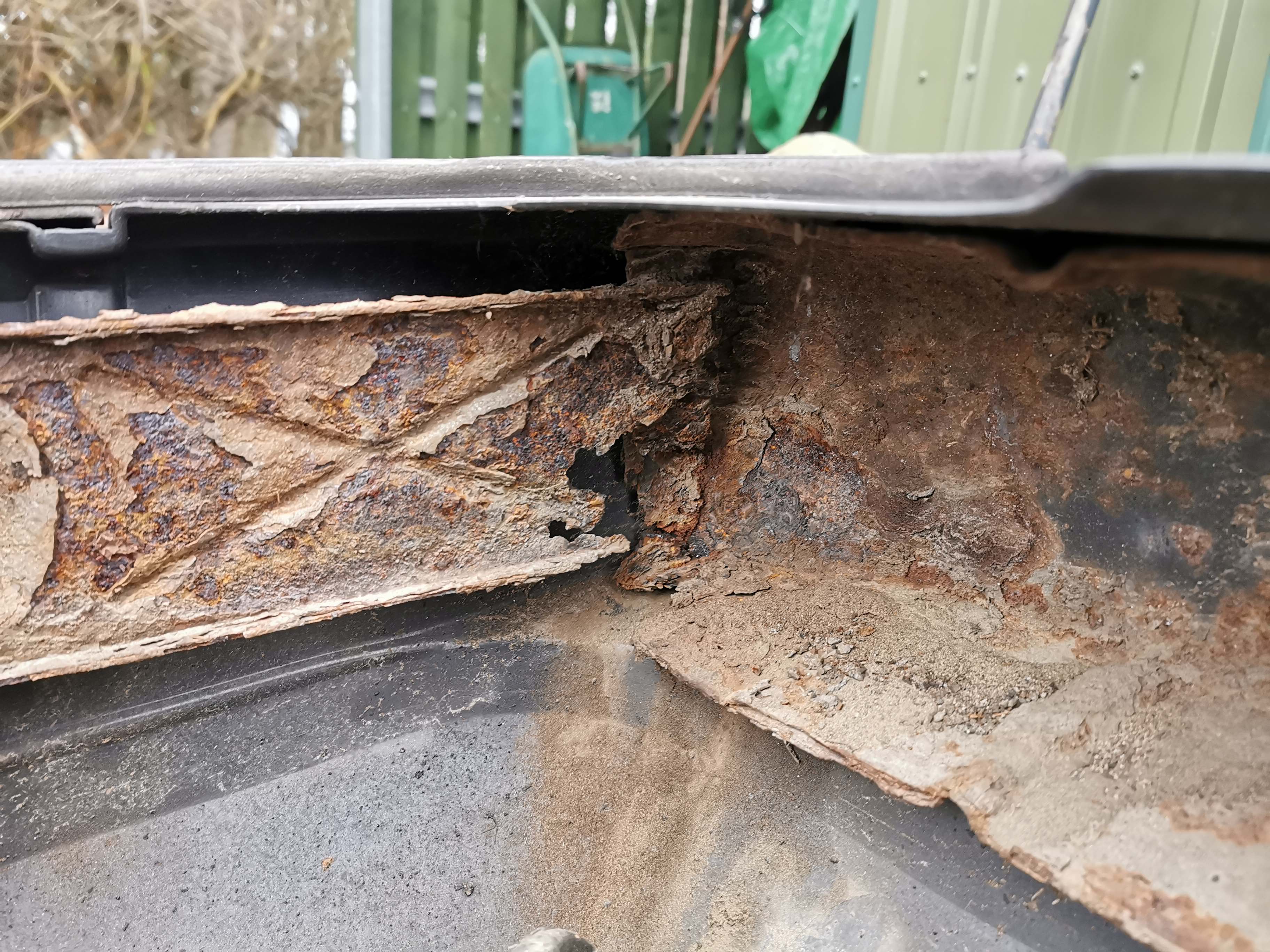 And last, but not least, I've finally got round to begin fitting the black leather seats and the dark grey carpets. Getting the old stuff out wasn't "too bad", but it was interesting to see how much of the red coolant, leaking from the front of the car, had made it's way along to the back footwell.

This is the rear carpet, and the red tinge would sit behind the driver's seat. It was damp here still. 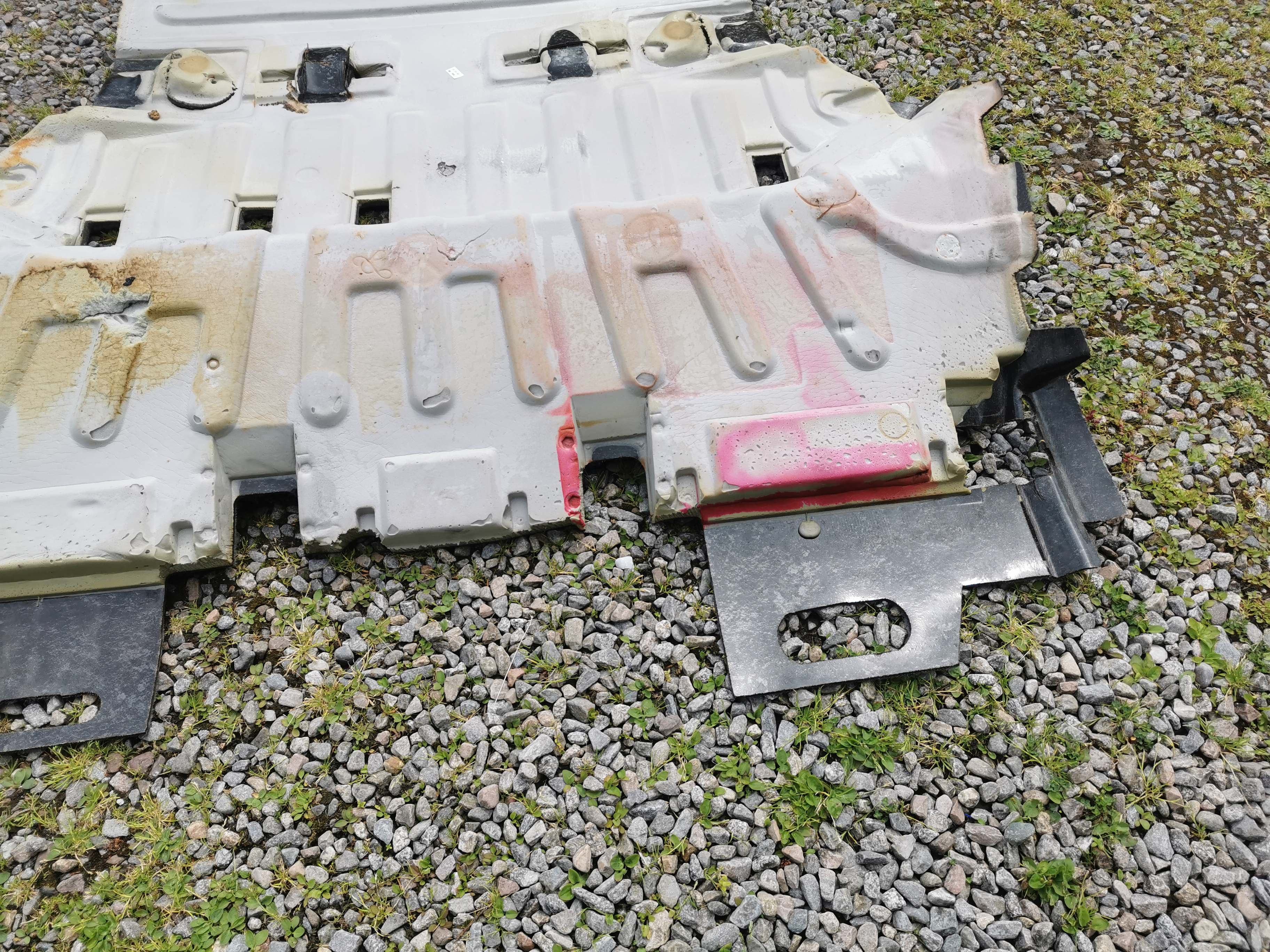 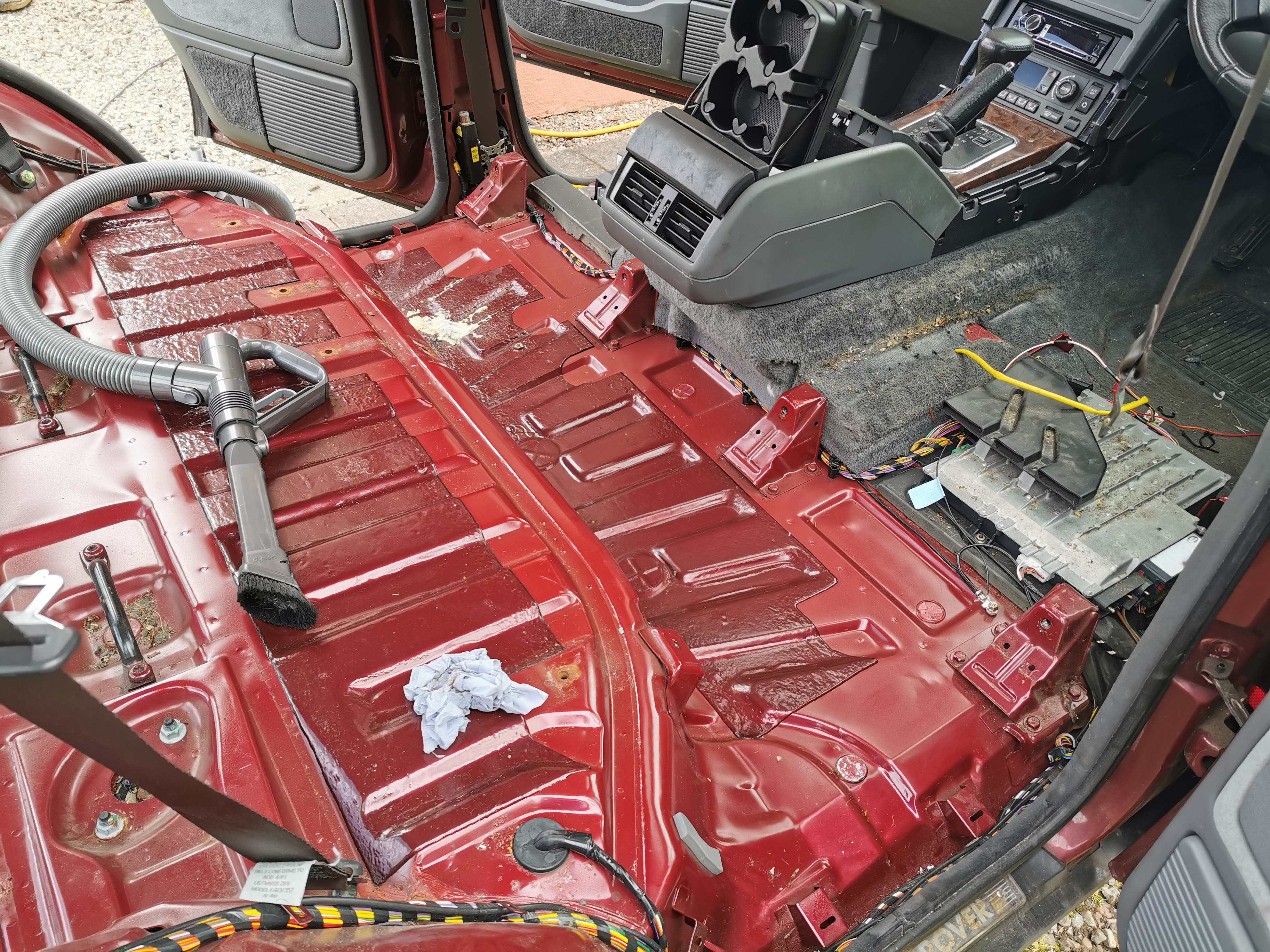 The driver's footwell, and the sill channel where the loom sits was much wetter - no surprise there then. What was a surprise was that it was so damp, but the car wasn't steaming up inside. Maybe Scotland's just not warm enough!

I'll come back later with pics of the interior and finished rear wheel arches.

Nice work!
Been there ... nightmarish ah ah ah
You might want to put some additional insulation while your queen is "naked", but do not overdo it - the fit of the carpets and other things is very precise from factory (word!). I put a layer too thick in mine and I had all sorts of issues to refit some of the trim in the proper position ....