rangerovers.pub
The only place for a coil spring is up Zebedee's
Cruise control dash light and daylight sensor

Someone asked recently if there should be a light on the dash to tell you cruise control was operating. The answer was that there isn't and that is confirmed by the owners handbook, but it looks like there might have been one planned at some point.
However, RAVE says:
Cruise Active Indicator
When the Cruise Control System has been activated the indicator will be illuminated. The Cruise System is interfaced to the Instrument Cluster (Z142) via the BeCM (Z238).
(Electricat Troublshooting Manual, Section E2 Warnings and Indicators).

While I had an instrument cluster apart to take pictures for the how to pull it apart thread, I noticed that the spaces for the warning lights are actually labelled on the main pcb. Interestingly, the labels don't match up with the handbook or the actual cluster displays. 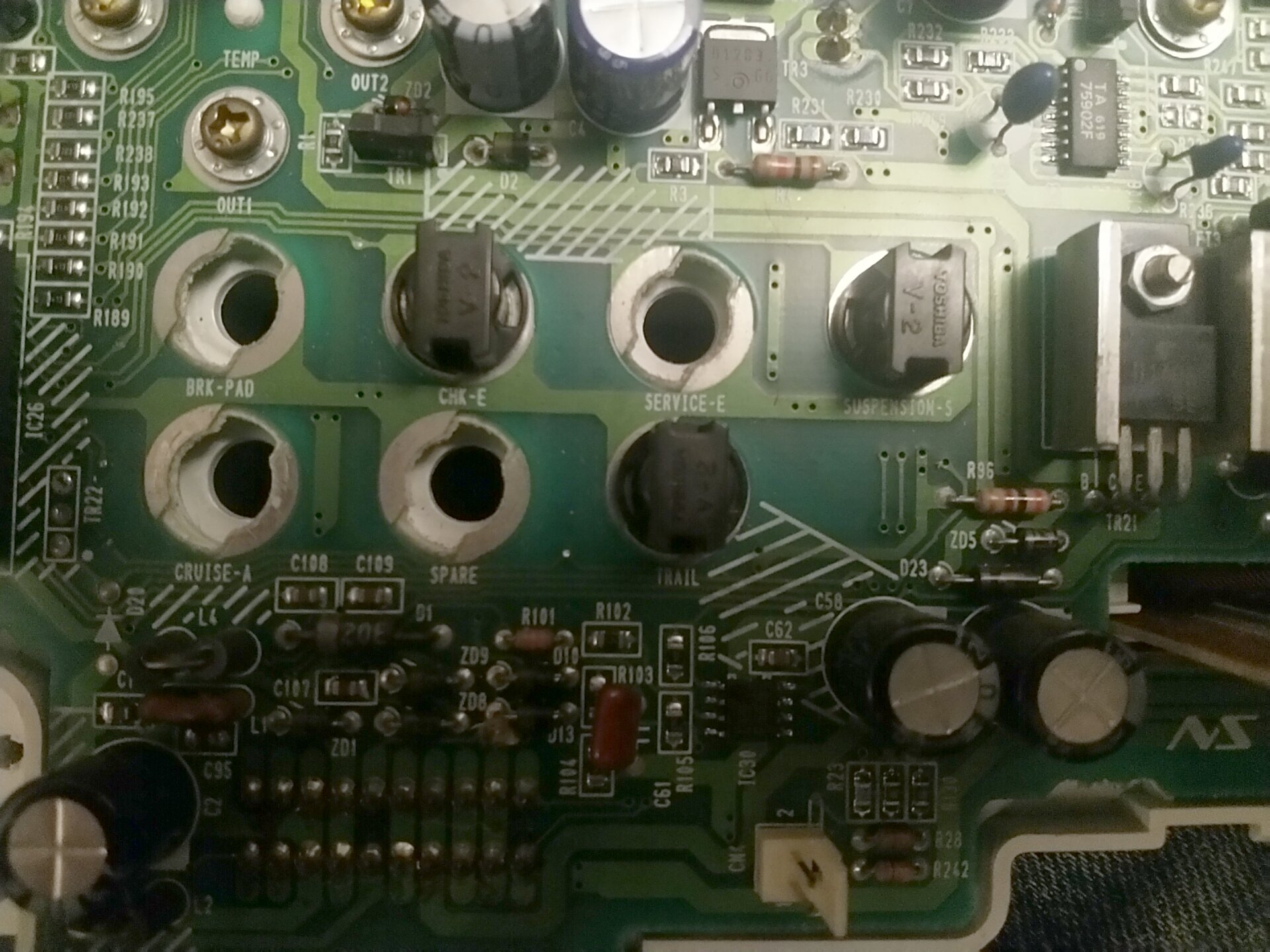 Looking at that (which is the rear of the RHS of the cluster) along the top we have, from right to left (which would be left to right as you look at the dash), Suspension (correct, the picture of the car with an Up arrow), Service E (obviously where the service engine soon light lives on those versions, or markets, that have it), Check E (check engine, so also correct) and Brk Pad (presumably for a brake pad wear indicator which we don't appear to have, the owners handbook doesn't mention and the overlay has no image, just plain black). Then if we look at the lower row, also going from right to left, we have a space where there is no bulb, then Trail (which is the trailer indicator repeater to tell you your trailer indicators are working), Spare (which is pretty self explanatory) and Cruise A (which I assume to be short for Cruise Active) yet that bulb is the one that lights up showing the gear symbol when you change range from High to Low and vice versa. So someone, at some point realised that they didn't have enough spaces for bulbs as they did warnings they wanted to show. That doesn't explain why they didn't decide to use the one marked Spare for the ratio change light or even the cruise active light......

I noticed something else I can't explain, on the front of the pcb, in the position where there isn't a bulbholder (far right, second row in the above pic) there's what looks to be a daylight sensor. 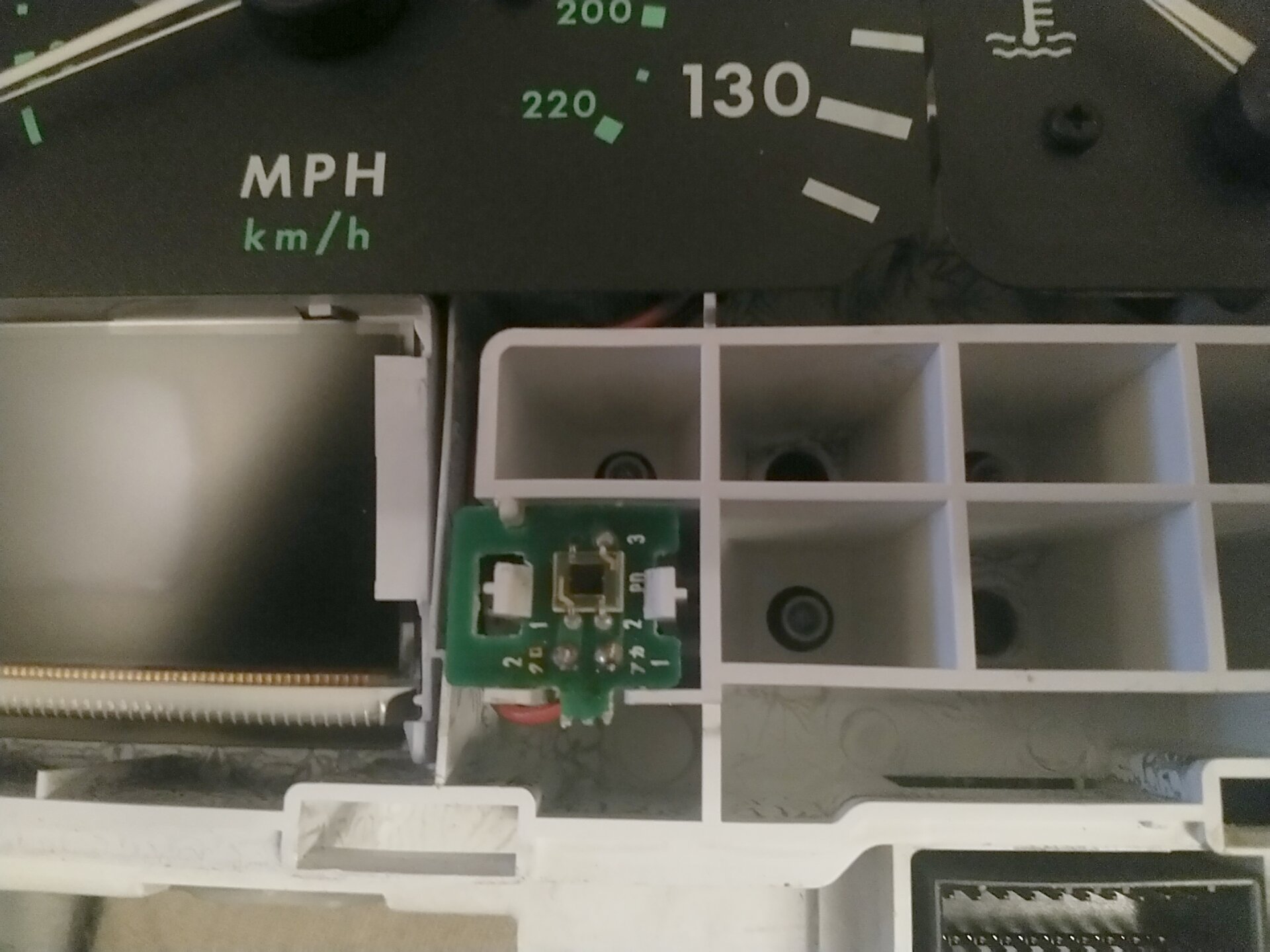 There is a matching clear section in the cover that goes over it so it must be there for something but what? Is there anything on the P38 that alters depending on whether it is daylight or dark? Nothing that I can think of but maybe someone else has an idea of what it might be there for. It isn't for the dash illumination as that can be set at different levels depending on whether the lights are on or not, so what does it do?

Well the cluster wasn’t made by Landrover, but by (????). Perhaps the original spec incorporated the cruise feature and as you say later deleted. Perhaps the light sensor was to work with the DRL option, switching on cluster lights when light levels were low as they don’t come on otherwise.

All speculations of course, but that is what I do well after a pint of G&T.

Richard, I love those archeology of features! ;-)
One thing I read somewhere, that the BECM has a low coolant warning message, which was never installed / activated. Let's talk about economics and long lasting engines (and comfort features).
I suspect that many engines where killed because of busted coolant hoses and low coolant for any reason.
The cruise control light in the switch is nice, I prefer its position, personally I have developed some kind of allergy against any lights in the warning light cluster, since I drive Land Rover ;-)

It is interesting that the light sensor has been installed, yet seems non functional?
Any sign of it in RAVE?
Looks like a plug in module from the photo, thus easy to delete.
I would say it is supposed to auto dim the instrument cluster lights at night?
It is well placed to measure ambient light falling on the cluster.
I have always wondered why the message center display is not dimmable as the back lights are?
Possibly this is something that can be turned on in Becm settings??? Probably need a Test Book tho'