rangerovers.pub
The only place for a coil spring is up Zebedee's arse
Heated windows and seats

Heated seats rarely work these days, people will insist on sitting on the seats which breaks the elements. How to repair is here http://rrnet.gadsdenrovers.com/repairdetails/seats/seatheat.html. Heated windscreen switch should operate relays 4 and 5 as it is split into left and right sides but where the elements connect at the edges of the screen can come adrift. Usually what happens is it goes in sections, this was mine a couple of years ago when the passenger side was still working but the drivers side had lost a few sections 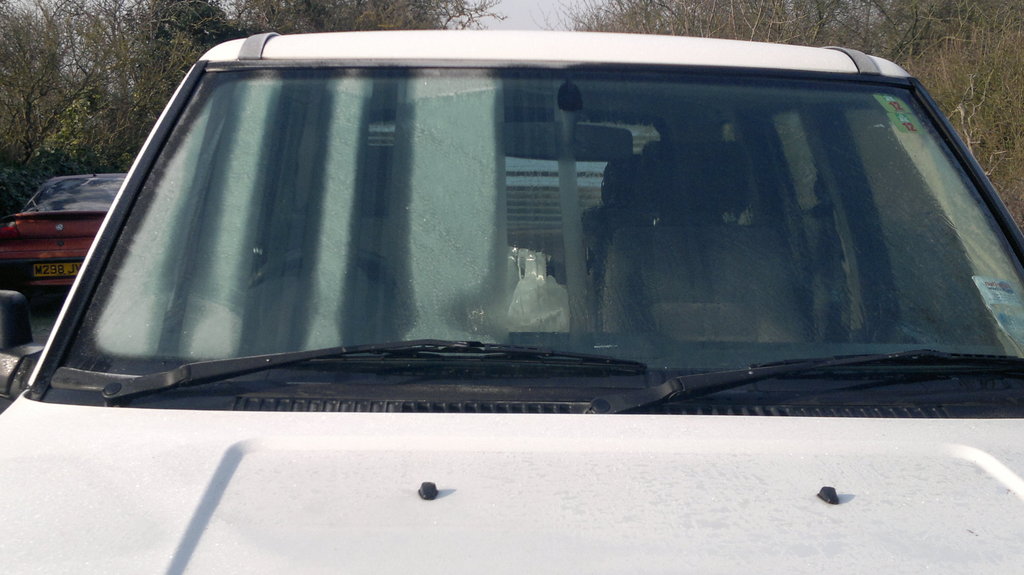 .
Now I'm down to a few strips on the passenger side and none on the drivers.

Rear screen is fed from Fuse 12 via an internal relay in the BeCM. Check to see if you get 12V on one side when it is switched on.

Do the other buttons light up, the ones along the bottom that adjust where the airflow goes?

All other controls are functioning which is why I'm really confused

You're not the only one. Each of the buttons has an LED behind it so it isn't like the illumination that uses a couple of bulbs and a light pipe. If you've changed the HEVAC and the replacement is the same that would appear to rule that out too. The HEVAC may have some sort of sensing to check that what you have switched on is doing something. Check if relay 5 operates when you switch the heated screen on (when relay 5 operates it powers one side of the screen and also pulls in relay 4 to power the other side). Maybe if it doesn't see a load it won't illuminate the LED. Front and rear screen operation is inhibited if the engine isn't running so maybe the HEVAC isn't seeing the signal to show that. Seat heaters are inhibited if a rear window or the sunroof is either in operation or unset as they use the same power supply and it is to protect the circuit from being overloaded.

What makes you think that? I did wonder if the BeCM had been swapped for a low line one but having checked, the BeCM doesn't have anything to do with the front or rear screens. It supplies power to the seat heaters but that is all.

Sounds like the hevac isn't seeing the engine running - it needs an engine speed signal. Without it, it will assume the engine isn't running and won't let you turn either heated screen or seats on.

No, BeCM doesn't control the HEVAC, more the other way round, although it does have an internal relay that supplies power to the heated rear window. It isn't involved at all for the heated front screen, the HEVAC pulls in the two relays in the underbonnet fusebox. But it does supply power for the heated seats.

Isn't this the car that had all sorts of extra wiring behind the dash when you got it? In which case it's quite possible the engine run signal has been disconnected by accident.

When matrix burst it flooded carpets I aquavacd it but unfortunately not enough and plugs going to the becm were soaking wet --- that's what I discovered today my mate Mark tried his HEVAC unit in my vogue and vise versa mine working in his 🤔 yet his one in vogue same issue of control switches not working ----. He and Tom @ Rover views say bcem damaged -- Mark reckons he can repair it ---- I don't have anything to lose letting him try ---- if he finds out anything tomorrow morning I'll let you know --- in case of any use in future for anyone

As mentioned - highly unlikely it's the BECM as it just powers the HEVAC, which if it works otherwise, then it's unlikely to be that.

As Sloth mentioned, it's far more likely to be an issue with the wiring to the HEVAC. It has no load sensing on the outputs to the heated front screen or heated seats as it's just controlling relays. So if it isn't turning them on, then it's down to the HEVAC not getting the engine running signal.

Whilst I believe this comes from the BECM, it's unlikely (but not impossible I guess) to be an issue there, as the BECM also sends engine running speed out to the instrument cluster.

I'll try and have a look at wiring diagram later and see if I can give wire colours to check for the engine running signal to the HEVAC.