rangerovers.pub
The only place for a coil spring is up Zebedee's arse
electric RR

A chap in new zealand fitted a Rotary engine in to a Model S, the EV people weren't happy!

I've considered fitting the 190bhp Toyota 2ZZ-GE motor from the Celica (which is the same motor used in a few of the Lotus's but breathed on) in a Prius just for the hell of it. Should go like stink once the weight of the batteries is removed. Just a shame the Prius is so damned ugly.

Richard, try it with a Lexus CT200h, that is a nice 'sporty' looking thing, which sadly has no guts (it wavers all over the place anyway)

Hmm that would be a hoot Richard, to be fair though i'd go one step further ;) 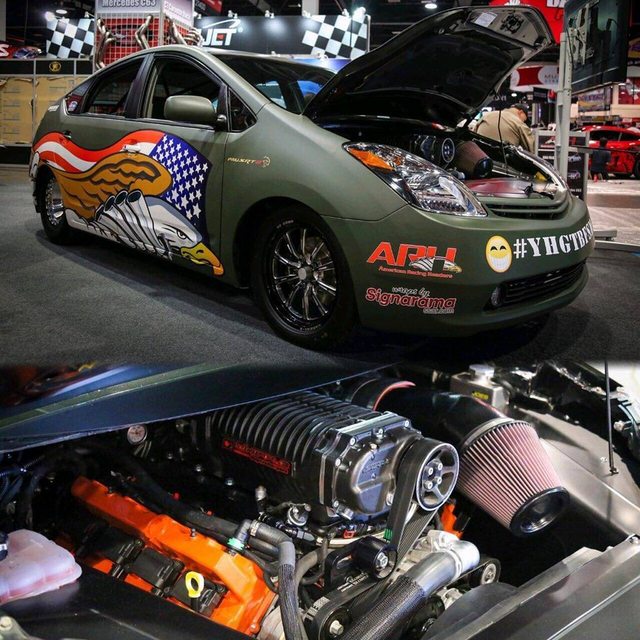 Yeah, that's a bit obvious though. I'd want it to look perfectly standard, I've always preferred the sleeper look.

To be honest the majority of people buy what they want.

There is a listers dealer near me with atleast a millions quids worth of Range Rovers on the front line, I don't think a campaign to stop the ads will make no difference.

I can't remember the last time I saw a RR advert!

Exactly strangerover: The 'Badvertising' folks behind these campaigns probably don't take any notice of their own ads. either.....

It would be a bit big brother-ish to flatly ban advertising of the most polluting cars, it isn't as though the average 16 year old will think a new SUV would make them look cool, rush out and buy one. I might understand forcing manufacturers to list emissions data on ads but don't they do that already?

Having read part of that "publication" and one thing that annoys me is the comment about "150,000 cars were sold which are too big to fit into a standard parking space". Well, I believe that a lot of carparks, for the last 5 years or so, are marking their spaces smaller, so that they can get more cars, and therefore more people, into the car park.

I find it almost impossible to get out of my Lexus IS in many carparks. It is easier to get out of the P38 in most places because I climb down whereas in the Lexus I have to open the door and pull myself up, and that is a problem in a small space.

That article obviously want everybody to buy crappy things like this: 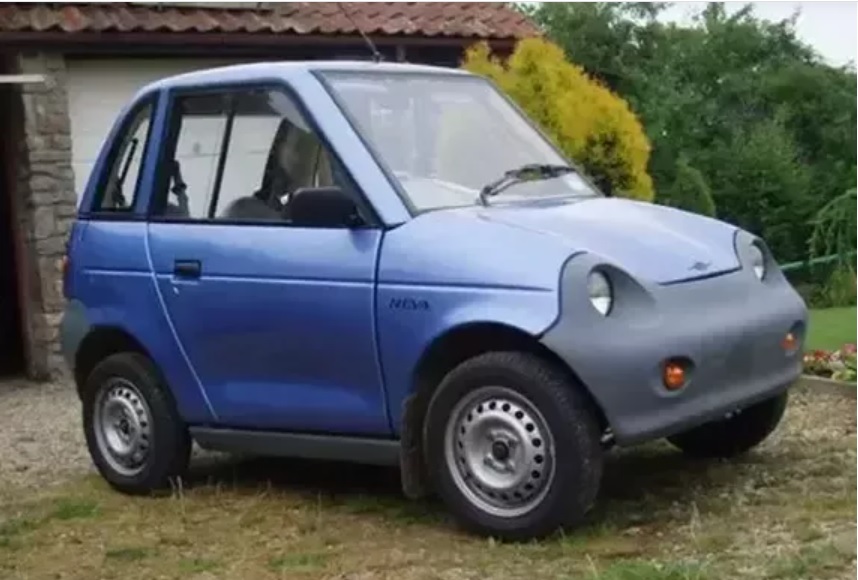 God, I hate these to**ers. They bleat on about how we, in the UK and Ireland, should stop driving cars, stop flying, turn off our central heating, but are quite happy to let China keep burning up millions of tons of coal, let Brazil cut down thousands of acres of forest, let India's population keep exploding into billions of people and do almost nothing to stop any of that because these countries are untameable. So we have to stop polluting the world.

Well, I don't think so. People like that Swedish prat can hoof off. When controls have been put on Russia, the USA, China, India, Brazil, and Indonesia then I will look at reducing my emissions footprint.

I've got a mate who is an architect and he was once doing a drawing of a theme park. He was laying out where each attraction could go and leave the required amount of space between them for punters to walk round. But that meant that the total space required would encroach onto the area that had been set aside for the car park. They also wanted a minimum of x number of parking spaces which wasn't possible with the space available. So he just reduced the size of each space until he could fit the required number in. As he said, nobody would be able to open the car doors once they were parked but at least he'd achieved the number of spaces the client wanted. When you look at the size of modern cars and compare them with those of 20 years ago, they've all got bigger so they can fit in the airbags, crumple zones, etc that manufacturers are obliged to fit these days.

Exactly, Richard, and the numbskull who wrote the article mentioned is completely ignoring that fact. So cars become bigger, to be safer but car park designers mark out spaces to be smaller to get more people in. So nobody wins because people start to park by encroaching into a second space. Thereby defeating the original architects idea of more customers, and also jerking everybody's chain when they can't park because of all the "bad" parking.

I also notice, of recent, a lot of the big supermarkets have reduced the number of mother-and-baby spaces, or at least they have in Edinburgh. The last time I visited my daughter there I found it very difficult in a lot of places to find mother-and-baby spaces. A real pain when you have two children [ or grandchildren] of 3 and 4 years of age, and you need to put one in each side of the back of the car. I have to admit to taking two spaces if really necessary, or else I just give up and walk from the back of the carpark with one small childer in each hand !!!

Bring back horses and donkeys, I say !!

Perhaps you are not aware of all the "Big Plans" for cities Pierre ?:
https://tfl.gov.uk/corporate/about-tfl/the-mayors-transport-strategy

When you have been suitably inflamed by that there are other plans afoot :

Apparently we will all be abandoning our cars very soon..

(PS: Yes, where I live they have tried these LTNs out; Yes, they are a disaster..
Some Local Councils tried to bring their Transport Plans forward by 20 years
using the Pandemic as the "reason" !)

Dave, not sure what part of the country you are in but I suspect nowhere near London. Until I retired I used to drive into Central London 2 or 3 times a week and it has its own set of problems. Unless you have at least a million to spend on somewhere to live, you have no offroad parking (20 storey blocks of flats with 5 car parking spaces?) but public transport is so regular that many people don't see the need for a car. Unfortunately that means they never take a driving test but can buy a pushbike and, having no idea of what the Highway Code is let alone having read it, promptly get squashed by a truck because they had no idea what those flashing yellow lights on the back of it meant. The vast majority of traffic in London isn't private cars, it's working vehicles, service engineers and the like. Like me, they have no choice but to drive in because they need the tools and kit that is in their car (or in most cases, van).

Unfortunately a lot of the decision makers live in London and assume the whole country is the same. Give up your cars and use public transport they will tell you. Yeah right. Living in a village with a bus once an hour (and the last one at 7pm) means there isn't one every 3 or 4 minutes to hop on any time you like. But public transport creates its own problems. The best day I ever had driving into London was the day the bus drivers went on strike. No traffic queues, no hold ups, it took me half an hour less to get across London than it would do normally so I would propose scrapping buses and offering people use of a car instead.......

In fact I do live in London Richard; I have been fighting the local LTN schemes too, won't bore you with the details but everyone (80%+) hates them but rather than planters/boxes the Councils now intend to use ANPR cameras instead...
This covers it quite well: https://www.bbc.co.uk/news/uk-england-london-54180647
(Note the Comments on that too...)
And also: https://www.bbc.co.uk/news/av/uk-56419277

Apparently it is nothing to do with raising revenues - it is about Climate Change !

PS: Forgot to mention but my local council have also brought in a Residents' Parking Scheme based on car Emissions.
(That's right - to Park !)......

Apparently it is nothing to do with raising revenues - it is about Climate Change !

Much like the ULEZ charges then. I paid a one-off €4.20 to France and €6.00 to Germany for a vignette that allows me to drive into their equivalent ULEZ areas. Without them, I simply wouldn't be allowed to drive in or, if I did, first time would be a hefty fine and the second seizure of the car. That is about cleaner air, unlike the TfL scheme where you can drive whatever you like, wherever you like, as long as you are prepared to pay the fee isn't.

As long as London buses meet their Criteria I don't think they actually care that much (yet) ?

Besides.. TfL now have their (extended) £15/day 7-days-a-week 07.00-22.00 'Congestion Charge' to fill their coffers.
(Also introduced during Lockdown of course...mainly because folks were understandably avoiding Public Transport)

I wonder if some of the cleaner busses have had LPG / CNG supplementation fitted, could help clean up emissions further even on the newer diesels.

The latest version of the London double deckers are Hydrogen powered according to the stickers on the side of them.

Yes, TfL have plans to (eventually) make all 9000 buses 'Zero Emission', but currently it is only about 200 - mainly EVs with only about 10% Hydrogen. They have actually dabbled with Hydrogen since 2002... but their early suppliers went out of business....

The main point however is that EVs (or even Hydrogen) can make considerable sense when such 'fleet' vehicles (particularly buses) are travelling in (relatively) local circuits with multiple depots etc..... aka the 'Milk Float Model' !

London is still however full of Diesel HGVs of course.

PS: Even further back: https://en.wikipedia.org/wiki/London_Electrobus_Company

Getting back to the SUV argument, they are complaining that SUVs are bigger than they need to be so making congestion worse. Have they looked at the size of the Tesla? One of the biggest cars you can buy yet they are OK apparently......

As some may know my partner is from Latvia and Riga has a fleet of electric trolley buses running around the city (https://en.wikipedia.org/wiki/R%C4%ABgas_Satiksme#Trolleybuses) but that involves miles of power cables above the roads and on the older ones the pickup points regularly come away from the cables so they just stop. Seeing the driver with a long fibreglass pole trying to reconnect the pickup is quite amusing but does nothing for traffic flow. No idea what voltage they run at and never felt the inclination to find out.