rangerovers.pub
The only place for a coil spring is up Zebedee's arse
P38 autobox problem

Bit of a problem, I'm in Yorkshire moors atm and have developed a auto gearbox problem. Its displaying different gear on the h gate to the actual gear its in. Dash display was showing correct gear. I've ordered a new h gate selector top as I suspected its whats wrong with it.

Its also just started crunching from p to r when selected and gearbox fault message on dask.

There are no fault codes stored though .

+1, faulty XYZ switch on the side of the gearbox. It sends it's signals to the BeCM, the H gate display, the dash and the gearbox ECU. If the gearbox ECU sees a signal from the switch showing a different gear to what it is actually in, that gives the gearbox fault message. It will also put it into limp mode so will only use 3rd or 4th.

At moment I can't do much as I'm at a holiday cottage. I've been under the car tonight looking at the wires etc and don't see any damage.

I've been looking at the etm which shows all interconnected. I'm hoping for an easy fix 😉

What does the display actually show when you move the gearlever through the gears? If it jumps around all over the place so showing the correct gear sometimes but not at others, it is one of the 3 internal switches in the XYZ switch. If it is just one gear out, then it could have moved on it's adjuster although I doubt it. There should be a short breather on the top of the switch but it often falls off and as it is directly below the LH condensate drain from the AC, it gets water inside it which rots through the thin connecting strips between the socket and the switches themselves. As long as P or N are showing correctly, you can at least still start the car......

Display was showing correct gear, while the h-gate lights were jumping all over the place. When it showed gearbox fault the dash display disappeared and it felk like it was in 3rd gear. Limp home mode.

Bollox
That's all I need. Thanks guys

I'm guessing it's getting warm and starting to cause problems.

Guess I'll bite the bullet and get a new one.

It's a bit odd though. H gate, BeCM (which drives the display on the dash) and gearbox ECU are all in parallel so if one is seeing the wrong signal from the XYZ switch, they all will. So the LED on the H gate will show the wrong gear but the dash will too. 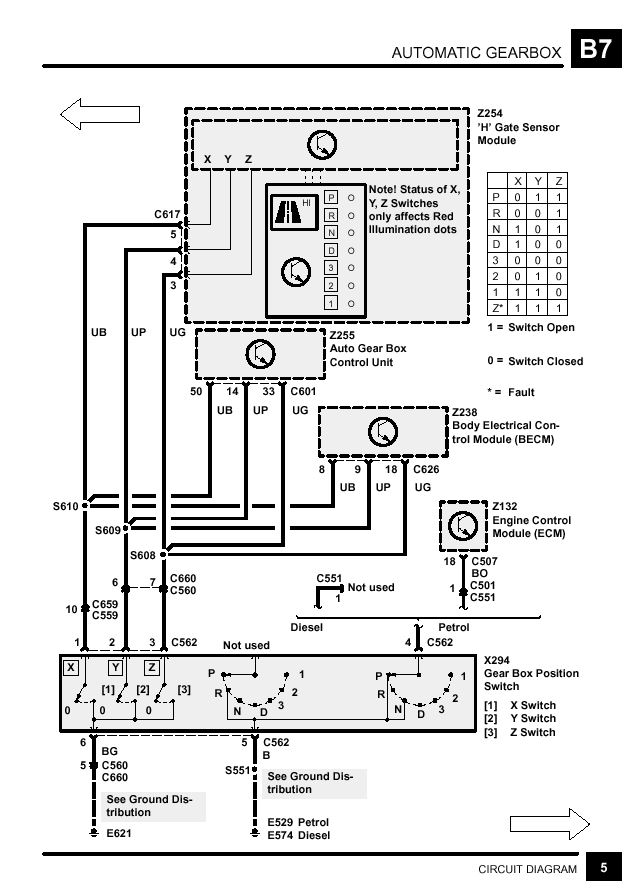 Yeah, I looked at that etm too.

because your not home so options are minimal find a screw driver and remove the switch panel and gear lever cover and give it s bit or lube to loosen up the linkages and look for objects that might cause issues . may be useless but might get you home to, 10 minute job but it dose hint that its the xyz switch

I've got toolbox with me. I don't leave home without it 😉
I'm checking atf level in 5he morning then going for a little drive.
See if I can narrow it down.

You should be able to see the gearbox outputs in Nano if you have one (you mention diagnostics?), there is a table in Rave to tell you what each selection should be. When mine failed (D2 uses a slightly different but very similar switch) you could see one switch didn't switch as fast as it should do, and would drop into limp mode randomly. More annoyingly it also wouldn't start like that, once I found what the problem was moving the stick between gears was usually enough to get it to move again. One of the springs in mine seemed to have weakened - you could feel it would press with almost no resistance at all to pressure. Repalcement switch was the only option at that point.

If you have contact cleaner in yiur tool kit...i'd remove the xyz switch and find the little breather Richard mentions, and squirt some contact cleaner in.. And then let it drain/ breathe
Later models of the switch dont have the hole. While youre there take down the zf part no from side of the switch, so you can buy a back up off ebay. If you're stuck i have a spare one with no breather

No contact cleaner with me :(
Not sure I want to be taking it off away from home.

The displays were all back to normal once it's cooled down. Will check it this morning and see if it drives.

I've got a lynx evo. It was displaying what was on the dash until the dash stopped.

I don't mean I won't try second hand, just not ebay from abroad as return are mighty pain in the arsenal.

Now that I think about it I think this started last weekend when wennt through a Ford that was a bit deeper than I thought. Possibly got water in it if as Richard says this has a breather on it. I'm assuming its the original switch.

Stupid question, I'm normally quite good with electronics etc, but not sure how to test the switches!

Black to any earth and red to wire?
Closed would show complete circuit while open is infinity?

Or the other way round, yes, you are looking for continuity between the switch wire and ground with your meter on the Ohms scale so it doesn't matter which way round you connect the leads. Be aware that the diagram in the ETM, the one above, is opposite to normal convention which would be 1 for closed and 0 for open, and you are looking for 1 being open and 0 being closed. So with it in Park, X switch would show closed, a complete circuit, while Y and Z would both show infinity.

If it has been filled with water, that would explain it, you wouldn't see infinity on the open switches but a high resistance. When in limp mode, the display on the dash will go off and not show what gear you are in. The breather was once a U shaped piece of tube so the open end of it pointed downwards to stop water getting in. Mine was missing so it was replaced with a bit of washer hose.

The part number you have quoted is for 98 onwards, it is STC2944 for earlier cars which should have a black plug, the later one has a grey plug.