rangerovers.pub
The only place for a coil spring is up Zebedee's arse
Fire Up the Roof

I've seen the setting for UK Police in the Nanocom.

During my little project to replace the electrochromic mirror with a reversing\crash camera I think I've spotted the plug for the roof lights.

Does anyone know where the switch pack went in the dashboard? What did it look like? How many unicorns do I need to buy one? Thinking of fitting an LED light bar.

Bonus points for recognising the movie reference in the title.

Mine is ex-GMP motorway patrol so had the full set. 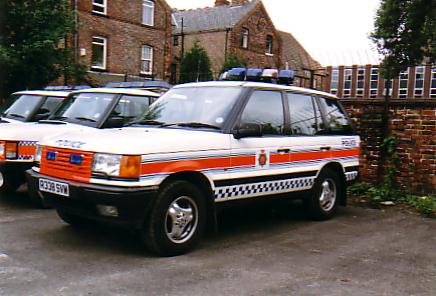 I've still got an auxiliary fusebox and split charge relay under the bonnet, bolted to the NS suspension turret. The cables for the aux battery located in the RHS of the boot space are still there too although the one from the battery to the split charge relay has now been re-purposed as a direct feed from the alternator to the battery (rather than via the starter motor as is the way it is done on a GEMS). When I dropped the headlining I also found 5 spurious Panorama aerial bases that had been chopped off at roof level and miles of cabling that ran from the RH A pillar down to the RHS of the bot area. There was an additional switch and some blocking diodes connected into the tailgate release circuit. This, I assume, allowed the car to be locked with the tailgate open. The Nanocom documentation says that the police setting should only be used if wiring mods have been carried out but doesn't go into any further detail. I suspect it is so it doesn't get confused and show blown bulb warnings when lights are used in a different way to how they were originally intended.

Where the control panel was would probably depend on what force ordered/installed it. Police spec were supplied with no stereo so there was a convenient hole there and I've got a couple of holes in the dash panel between the centre vents and instrument panel (above the headlight switch). There's a pushbutton fitted into the blank where the sunroof switch would be if it had a sunroof and signs that something has been glued to the interior light panel too. External shots are the only pictures I have of it in it's original guise, no interior shots unfortunately.