rangerovers.pub
The only place for a coil spring is up Zebedee's arse
Best Sound System Upgrade

Currently I'm using a Bluetooth hands free in the cigarette lighter with an AUX OUT into one of those clever little cassette adaptors. Not the highest quality mic on calls but a really simple setup. I can use Google Voice commands to skip tracks and make calls.

I'd like something with a sun visor mic and more state of the art with DAB.

Is a unit like the PURE Highway 600 the way to go or should I go the whole hog and get a touchscreen multimedia unit?

There's no GPS so I can install in place of the oddments cubby hole. There are ready made ISO adaptor rigs on eBay.

I'm not a great fan of the multimedia units as no matter how well they are done I think they look out of place in a P38 (and some installs just don't fit properly and look like a bodge). You also lose the very useful oddments bin. The other thing is that sooner or later they will become out of date. You only have to look at the systems fitted in some production cars that are no longer upgradable. I've got an old Android tablet that won't run a lot of modern apps as the version of Android it is running is too old so it may be a while yet but sooner or later it'll be out of date. If you want to retain the original stereo, the Pure Highway range would be the way to go. If you don't mind changing the head unit, then something like this https://www.kenwood-electronics.co.uk/car/rec/dab/KDC-BT950DAB/. I've got a previous version giving me DAB and FM/AM radio, CD, USB, line in and handsfree phone with an external mic that I've got at the top of the A pillar trim. The thing I like about it is that the display colour is adjustable so I can set it to the same shade of green as the HEVAC so it doesn't look out of place. You'll also need a couple of these blanks to fill in the space at the sides 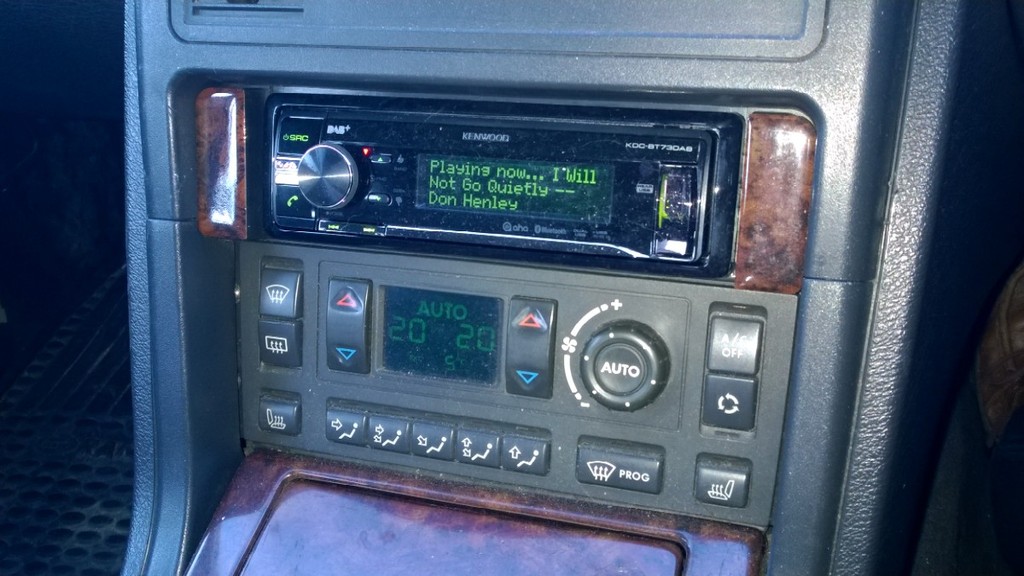 If you've got the system with door amps you can bypass them (and add crossovers instead if you want the best quality sound) and use the speaker level outputs on the headunit. Your loudspeakers will almost certainly be well past their best these days and a straight swap which improves the sound quality no end, is the JBL Stage 600CE speakers which can easily be fitted in place of the original ones. For satnav I use a Garmin stuck on the windscreen in the centre so easy to glance down to look at it and the model I've got comes with lifetime map updates and can be linked to a remote wireless reversing camera which I've mounted above the towbar between the two electrical sockets. I use it mainly so I can hitch a trailer up on my own but it is also useful for stopping me putting a neat 50mm diameter hole in someone else's number plate when reversing into a supermarket car park space.

I've got a Pure Highway H270SB (well had 4 of them in total) though not in a P38. I wouldn't recommend them as I've had 1 of the 4 fail under warranty (DAB tuner totally gave up), another fail out of warranty (bluetooth drops any connected device after 10-30 seconds of use) and the other two work for the most part, though are prone to the DAB tuner throwing a fit every so often and needing the reset button pressing, which removes all your presets.

Actually to say the remaining 2 still work isn't entirely true, one of them the select button take a few presses to get it to select a station. Which combined with the routine resetting they need, is more of a pain than it might at first sound.

The highway sounds like the better option (the one that broadcasts over low power fm radio) though having seen inside a couple of other failed Pure radios, I don't think the quality of their kit is particually good personally. Though I'm not a fan of touchscreen operated car stereos in general, buttons are easier when you want to just operate it without having to look at it. The Highway 600 might be better than the original (which I've also used briefly).

I've had a couple of JVC stereos and they have been good - the only downside to them is the way the DAB tuner works is a bit clumsy compared to the Pure ones, but once you get your head round how to work it they work very well. Only reason I replaced the original pair of JVC stereos I had for vehicles was they lacked bluetooth or any form of Aux in port. The handsfree on the JVC is a lot better than the Pure ever managed, it seems to do noise cancellation a lot better than the Pure and is clearer to hear the other end of the call as well. The highway 600 may be better in that respect, but I'd be unwilling to give Pure any more cash given what I've seen of their kit personally.

That Kenwood unit looks perfect and is the same price as the Highway 600 v2.

Why do people bypass the door amps?

I think the PURE Highway scores because of the magnetic ground plane anchor for the roof and stick on windscreen antenna. I assume the Kenwood doesn't have anything like that because it's a one box solution in the dash?

The weak point of the Highway is that I still need the cassette from the AUX out. FM is out of the question. Quality is dreadful and you can never maintain clear channels on a long journey.

The original stereo outputs a low level signal which is then amplified by the door amps but if using an aftermarket head unit with standard DIN sockets, that will output a higher level to drive speakers directly so the door amps aren't required. Or, you can use that interface which attenuates the signal from the head unit and matches the impedance so it can drive the amps. Simply bypassing them means that the head unit is supplying speaker level outputs at the correct impedance without the need to modify the signal to feed the amps. The advantage with the door amps is that they incorporate crossovers so each channel comes into the amp at full frequency range but the output of the amp is split between low frequencies and mid/high. I didn't bother originally and with the JBL speakers it sounded fine. In fact a mate who spent most of his working life as a sound engineer thought it sounded great. Then I added a couple of these https://www.ebay.co.uk/itm/264933727526 and he agreed it sounded even better.

Thank you! Mine is the Alpine head unit. The release keys seen to be tricky. Found a 38 piece kit on Amazon but none look exactly like the ones in a video I watched, but it's hard to tell as moving picture and freeze frame too blurred.

Do you know there RRK- number or if another brand uses similar keys?

The Alpine has catches at the top, about an inch in from each side. A couple of feeler gauges usually works well.

You haven't got the DSP option have you? If you have it then gets very complicated.

You haven't got the DSP option have you? If you have it then gets very complicated.

In which case I've decided to get a Highway 600 and install a Grom box at the back of the radio to give me a hard wired AUX input.

The Grom is certainly the easiest way to go if you have a working DSP system or even the Alpine with door amps. I had one to start with and was perfectly happy with it - I just went another route later on.

In that case, ignore everything I said about door amps, you don't have any. While it is possible to fit an aftermarket head unit to a car with the DSP system, it isn't straightforward at all. I've got all the bits and a dead DSP amp to make a 50W per channel plug in replacement for the DSP unit using a pair of Class D stereo power amps with crossovers but haven't got round to putting all the bits together yet. In theory, if it all works as expected, it will be a plug in replacement and will just need the rear left and right channels picking up at the Alpine head unit and running to the back where the amp will live.