rangerovers.pub
The only place for a coil spring is up Zebedee's arse
How can I work out what engine I have?

The new engine I have has a stripped exhaust manifold bolt hole. I need to order a helicoil kit. I assumed it was M8 as the Land Rover Classic Parts website shows M8 (part number ERR4961) and I used M8 in my car when I did the head gaskets a few years ago.

However, the bolts in the engine I've had delivered this week are measuring roughly 9.5mm in diameter which I make to be 3/8UNC.

The part number on the side of the block doesn't match any of the part numbers given on the Classic Parts website either. The engine is stamped with HRC2411.

Annoyingly, Googling that shows a number of forum threads referencing this part number going back as far as Discovery 1 and 2 as a 3.9/4.0. There's one or two references to this block number in a P38 but as a 4.0. No confirmation of it being a 4.6.

The engine number starts with 60D which I think means it's supposed to be a 4.6 Thor, right? Is there anyway to confirm beyond the engine number that it's a 4.6? The intake system is the Thor set up.

Something feels a bit off as the manifold bolts seem to be the wrong thread. Despite what Land Rover say the bolts should be, the guy that sold me the engine was adamant that they're 3/8UNC when I was discussing the stripped thread with him. Seems odd that he'd be right about this specific engine if Land Rover says it should M8 and my own engine used M8.

I'm a little concerned that it's an older 4.0 engine that's been converted to be a Thor and had the engine number buggered about with at some point by the previous owner of the car it came out of.

Casting number HRC2411 is the final version of the Rover made block so it matches the engine number.

3/8 unc is earlier, RR Classic et al. If they are all 3/8 UN its got the wrong heads. If only one someone has re-tapped a stripped thread 3/8 UN rather than helicoiled. Bodger central!

Whatever its a FrankenEngine, Bitsa, bodged up. No tellings what else is wrong or how and why it got the wrong heads. Throw it back!

Thanks for that. Seems like I can trust it's a 4.6 Thor then.

All the manifold bolts are the same. The guy that sold it to me said it had had head gaskets done recently but had no paperwork associated with it.

I wonder if part of that job involved fitting new/reconditioned heads. It would be a simple explanation of why they're wrong.

Correction for Clive (and clarification for David), the GEMS used Imperial threads in a lot of places, particularly the heads. So 3/8 UNC is the correct thread size for both inlet and exhaust manifold bolts on a GEMS. There's quite a few other threads on the engine that went from imperial to metric on the Thor. The other difference between GEMS heads and Thor heads are the holes where the spark plugs sit. On a GEMS, they are larger which allows use of the BPR6ES plugs with the 21mm head hex but on Thor heads the holes are slightly smaller meaning a 21mm plug socket often won't fit so they use the PRF6N plugs with a 16mm hex. Other than that they are identical castings, just the machining is different. Classic heads had an additional row of bolt holes along the bottom so are referred to as 14 bolt heads (even though it has been found the additional bolts can cause uneven loading on the head gasket causing it to fail so the advice these days is to either not fit them or fit them but not torque them down).

I've had the spark plugs out now. They're all NGK LPG2 plugs (despite the engine not having LPG fitted, it's just a completely stock intake manifold) and the look like this: 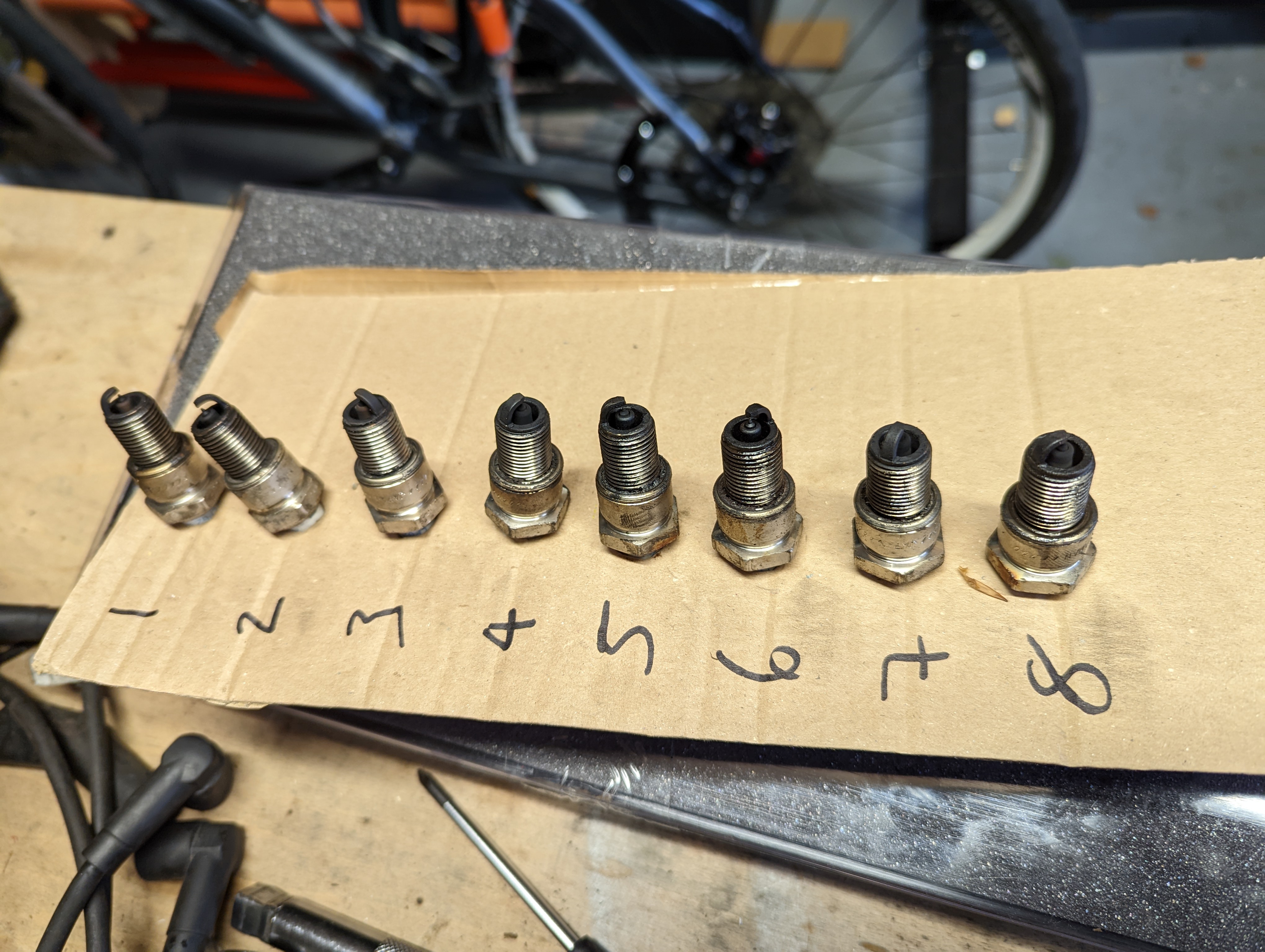 I've turned the engine over by hand with the plugs out and it spins freely, so that's good. Next step is hooking it up to a battery and compression tester.

I would think so, all engine bolts on the GEMS are imperial even though non-engine parts are metric.

I've had the spark plugs out now. They're all NGK LPG2 plugs (despite the engine not having LPG fitted, it's just a completely stock intake manifold) and the look like this:

Shame the pictures aren't showing up, they have a no entry sign showing so I suspect you haven't made them viewable to anyone. The NGK LPG plugs are the same as the NGK Iridium ones but with a higher price tag so would be fine if someone has money to burn. I pay £2 each for standard NGKs (BPR6ES), the equivalent Iridium (BPR6EiX0 are twice that (although will last about 4 times longer) whereas the special LPG plugs were will over a fiver each last time I looked and they appear identical to the standard Iridium. However, as the LPG2 has a 21mm hex, that does show you have GEMS heads. I suspect someone has fitted replacement heads at some point in the past and not specified Thor ones.

Ok, good to know as I need to order a couple as some of the bolts for the brackets were completely missing.

I'll have a look at the photo links when I get home from work. Might be tomorrow, I'm working until 11:15. They worked in an incognito window without me being signed in so I assumed they'd work for everyone. Had to try Google Drive as Imgur is playing silly buggers and won't work on my phone.

I really don't trust this engine or the guy I've bought it from at this point. Stripped threads, missing bolts, cheapest of Chinesium oil filter and black gunk all over all 8 plugs.

The guy told me before I paid that it ran great but when questioned about the oily plugs it now had a "cough on start up" that he didn't tell me about because it had been sat for a while. He's also still absolutely adamant that a Thor takes 3/8 bolts. Apparently he's checked several others he has laying around and none are metric. I guess mine is somewhat unique then!

The listing for the car said it had LPG but the intake manifold has no fittings or holes for LPG. When questioned, the car initially didn't have LPG. He has multiple cars being stripped and lists items from other cars on Facebook posts for cars he's breaking so the LPG kit was listed but not from this car. Then it had LPG but he swapped the upper manifold out when he took the LPG kit off. He didn't swap the lower manifold though so I'm not sure how it supplied gas to the engine without being plumbed to the lower manifold though. Now the LPG kit it had wasn't hooked up after the head gaskets were done. Not sure where the fittings in the manifold have gone though.

He also won't accept it back because I've "opened it up". I've taken off the exhaust manifolds, removed the alternator etc and taken the spark plugs out. Yup, that's a very open engine now.

Sounds like he cobbled together a Frankenmotor (which is why he's saying it has had new head gaskets) but you've got a Thor block (from the 60D number) so the crank position sensor mount and knock sensor fittings will be correct (as they are different to the GEMS). Some of the dodgier LPG conversions put the spuds in the upper manifold to make it easier so he might have been being straight about swapping the upper manifold.

He's bullshitting about Thors having imperial bolts, they don't, virtually all the threads are metric. I suppose the bottom line is as long as it has good compression and oil pressure, it doesn't really matter too much, it'll get you back on the road. It probably won't have a cough on start up if it has some decent plugs in it.

I think I've fixed the image links now, used Imgur on the PC.

You have. They look like plugs that have been taken from an engine that has been started and run for a short time a number of times so they are sooty rather than oily. I wouldn't worry about them too much, at least it shows that all cylinders have been firing...

The 60d Thor engine I bought from the scrap yard recently also has unc bolts on the exhaust manifolds, not M8.

I guess these engines are 20+ years old, and are known for head (gasket) issues so it's not entirely unlikely that the heads could have been swapped?

You have. They look like plugs that have been taken from an engine that has been started and run for a short time a number of times so they are sooty rather than oily.

Maybe I've just been lucky with the condition of all the spark plugs I've removed in the past. Never had them come out black like this before.

These are definitely oily/gunky to the touch though.

Bolts finally arrived to get it fitted to the engine stand. Hermes/Evri apparently tried to deliver them but their van broke down so they went back to a depot somewhere. Evri apparently gave up at that point. The shop I got them from sent out a new shipment via Royal Mail. I can now get on with doing compression and oil pressure tests.