rangerovers.pub
The only place for a coil spring is up Zebedee's arse
Eas valve blocks

So today I go up in the loft and come across 3 valve blocks 🙈. How hard is it to test them before I put them up for sale, or do I just sell sold as seen, I’m pretty sure they all work, as I wouldn’t of bought any that weren’t working

Probably best to just swap it into your P38 I'd guess.
How much is a working one worth? I'm getting to the stage where I'd like on on the car and one to rebuild. The issue is NRVs because I can't find them anywhere.

I salvaged 3 valve blocks to get enough good NRV’s to make one good valve block.

I bought a job lot of 13 for £120. Worked my way through some of them, one had a duff driver pack, one had NRVs that were completely shot but by cannibalising one I've got 2 rebuilt and tested ones at the moment. I bought some cheap pressure gauges and lengths of hose so can pressurise them from the dead, but now rebuilt, compressor that the seller chucked in with them, open each valve in turn with a gauge on each output and confirm it holds pressure. They seem to go for around £100-120 for rebuilt and fully tested ones but I've seen ones that are an unknown quantity for up to £80.

Probably best to just swap it into your P38 I'd guess.
How much is a working one worth? I'm getting to the stage where I'd like on on the car and one to rebuild. The issue is NRVs because I can't find them anywhere.

I know one of them is good, as it’s a rebuilt one from my car, the other 2 I haven’t tried, 2 are in the eas box with lids and dryer,, think I’ll just advertise as spares or repair, having a clear out, got 4 cylinder heads, various brackets, sumps, front cover, rocker covers, the list is growing every time I go in the garage 😂🤣

I wonder how much heat the NRVs need to resist? It should be possible to 3D print them in something like PETG that is happy up to 70 degrees or ABS that does -10 to +100 (ish) but is harder to print.
I'm sure it could be done with with a metal pin or a two part print and a spring.
I guess the acid test is a good fit with the correct size O ring?

If I remember correctly, there possibly lead , I’ll pull one off and have a look, would be easy enough to make new tips on the nrv’s, being a plumber I’m ok working with lead, did my apprenticeship back in the days when we worked with lead,, I could easily make a mould if it is the case and retail the nrv’s

I don't think they are lead, more likely Mazak aka Monkey Metal. 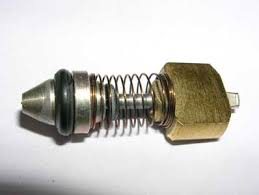 I was thinking of cleaning up the conical end in a lathe. Just take a thou or two off. 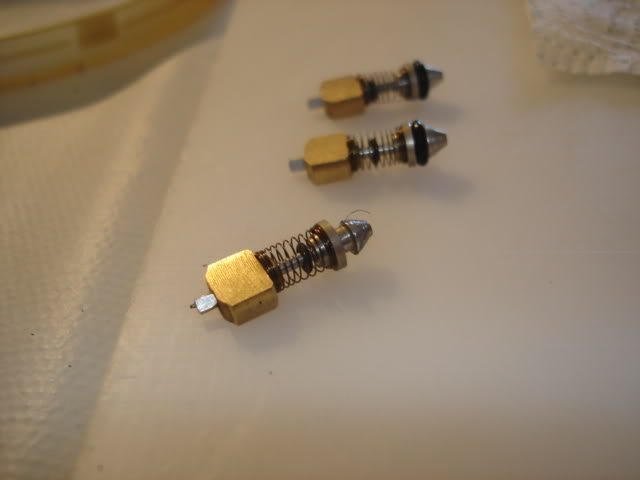 Dave posted the picture whilst I was typing.

If its simply the tips needing reworking to make proper line contact with the O-rings its almost trivially easy to re-cut them in a lathe to restore the angle and clean the surface. maybe 10 - 15 thou off the length which will make no difference to how it works.

Probably the right way would be by hand in a watchmakers lathe. But that needs serious skills and practice. Hand work can follow the cone so accurate set-up isn't needed. Watchmaking machines are crude!

In a conventional workshop machine you'd need an accurate carrier so its all a bit more tedious. But not intrinsically difficult. Setting up to get the cone dead parallel to the spigot is the hard bit. If its off angle it will jam up just enough to leak due to the O ring below the cone.

Or just reverse engineer the whole thing to a functional equivalent rather than dead copy so it's easier to handle. As ever its more about having a big enough market at a sensible price to be worth doing a batch. Thinking time, drawing time, tooling time and set up time is the killer. Probably take as long to get ready as to make 100 on a manual lathe.

Not volunteering. Re-making the float needle and seat more or less from scratch on an obscure French Zenit carb off a pre-war Delage so the damn thing worked with absolutely no data cured me of that sort of thing for ever.

I've got a small model making lathe with a self centering chuck and a friend of mine also has a watchmaking lathe if I need one.
The tips look stainless steel or possiblly mazak as Richard said. Stainless is not easy to machine, by me anyway. If you cock it up thats the end of the valve block.

So the conical tip is there to guide the O ring to make a good seal? I guess it does need to be metal then :(

Yes, the cone makes sure it seats properly and doesn't go in lopsided. The O ring won't seal if it isn't flat into the hole.