rangerovers.pub
The only place for a coil spring is up Zebedee's arse
V8 electric fan conversion

Don't mind me :) The red one will certainly need filling up once it goes back together, so I may as well put methods into a hat and pull one out to try when it comes to it!

Hmmm I can't find that one? Sounds interesting though.

Hmmm I can't find that one? Sounds interesting though.

Ah that's one I'd been looking at - its also known as 50018. Trouble with that is the connector is a bit odd and I can't find it. It's like a JPT connector, but has four pins, two of which are spaced further apart from each other. I could do the resin trick.

Little update - I now have the Intermotor 50174 fan switch fitted into a custom top hose. Interestingly, the 50174 switch is also from... a Volvo!

Random selection of pics from this morning's ventures. Little bracket for the Volvo relay box welded on to the new cowling, and then painted all black to look a bit less obvious.

The 95-90c output on the fan thermostat controls the low speed, and the 100-95 controls the high speed. In the loom I've made, I also have another input to the high speed spliced in, which I will run to an override switch inside the car at some point. The way I've made the loom, its all very easily removable for inevitable maintenance.

Completed cowling with fan and relay box. You can see the studs in the bottom that fit into the original mounts on the radiator. This relay takes the ignition feed via a 3 amp fuse from inside the ECU box and outputs a switched ground to the fan thermostat switch. The red wire is the positive to the fan relay box - it still needs shortening and some black conduit over it, but I didn't have any more 10mm crimps today. And the important bit. I'm mostly happy with this.The 35mm-32mm bend (left side of thermostat switch) is currently touching the alternator mounting bolt. Not much I can do to avoid that - this is all a bit tight. I think some kind of shield around that bit of the silicone pipe is the way I'll go, to at least stop it rubbing. Thus far I only have one small leak, and that's on the thermostat switch itself - I didn't put any PTFE tape etc around its threads. Rookie mistake. Looks good Sloth- and you resisted the temptation to fit bright blue hoses!

Well done that man! Sloth do you have any led-control on the dash when it kicks on and off? I'm curious if there is any visible difference on the temp-gauge when it comes on or off, regarding in another thread the discussion about these gauges not being very accurate.
As long as you are moving forward it won't come on at all I presume?
Good work!

Hoses had to be black :) I don't get the obsession with blue hoses!

I don't have any indication that the fan is running, no. I'd thought about it, but for now I'm happy enough relying on the intermotor switch to do its job. They seem to be the one defacto manufacturer for these things so I'm happy enough trusting it.

I don't see any fluctuation in the gauge either, until my thermostat sticks open, which it seems to be doing again slightly. That and a leak on the top hose spout where it bolts to the inlet manifold getting progressively worse means I'll be draining coolant again in the near future and pulling the inlet manifolds off to replace the o-ring and thermostat.

I should point out for anyone else considering this, I have bridged the single pressure switch that controls the low speed 'on' setting for the condenser fans. This means my front fans always run on low speed when the air conditioning is on. I've only done this for the air conditioning's benefit, as these fans do naff all for cooling the main radiator on a V8. In theory you shouldn't need to do this, as with no air flow while stationary and the engine cooling fan is off, the pressure in the condenser would build up and bring them on anyway. While testing the engine cooling fan, I actually had the condenser fans come on at high speed by themselves, meaning the pressure in the condenser had built up quite a bit beyond the slow speed stage. I can't remember the specs but it's not too bad, and they didn't run for long before going back to my forced low speed. It was a warm day, and the car was sitting with the sun directly overhead too, so inside was mighty warm. There is an 'oh Jesus Christ I'm about to pop' overpressure cut out on the compressor circuit too, which I think is set quite a bit higher than the high speed fan switch, so if it does go thermonuclear, it won't actually do damage.

This assumes of course your air conditioning and condenser fans work. The fans really need to if you're going to lose the viscous fan and want the a/c to work properly.

Just goes to show though, the viscous fan did move a lot of air even when mostly free-wheeling, and pulling air through is a lot more effective than pushing! I'm still happy to no longer have it though, as is my water pump. No more coolant emerging from the weep hole.

I think your pump will live longer anyway without the stress of an unbalanced fan on it's shaft.
I was asking about the tempgauge (and you gave the answer already) because when the needle doesn't move with some 10º fluctuation a driver is not informed about a raising temperature issue, on time I mean. When the needle crawls up, not to say the red dot is showing, it is already too late with such a slow registration.
In fact far too late and damage is done.
Maybe accurate gauges could have saved people damage.
It's just a thougt, after your information about Nano live data.

Mmm, I was thinking of getting one of these or something like it to give a better idea of what is going on with temperatures: 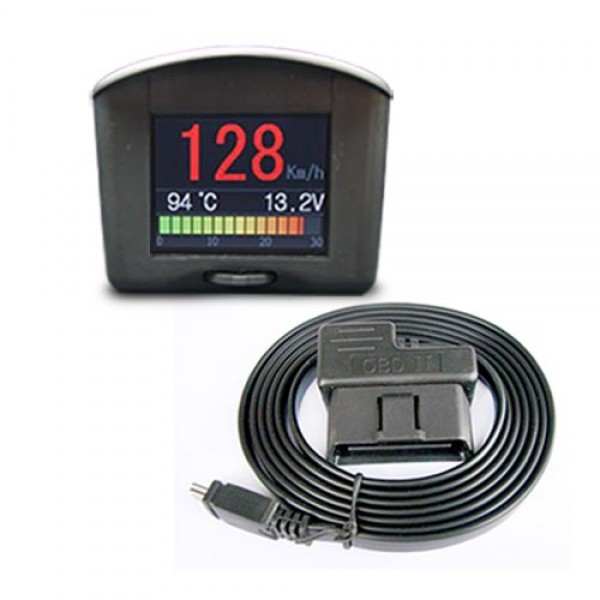 They're on eBay around the £40-50 mark from China. A bit cheaper than a Scangauge 2. That to the side of the instrument binnacle wouldn't look too intrusive, and provide more useful data. I believe the temperature can be set as the main 'big' number displayed too from what I've seen - but it does other handy things.

I'd be happy with the Nanocom for this, but its a faff to get it setup and put away again. This looks like it can be left in-situ and turn on/off by itself.

Is it too late to suggest a "Wading Switch" so you can be sure your fan is still next time you cross the raging rapids of the West Country?

Knowing how 'good' my door seals are, I don't think I'll be wading anywhere anytime soon with the BECM, EAS, SRS and autobox ECUs all sitting on the floor :P Is it too late to suggest a "Wading Switch" so you can be sure your fan is still next time you cross the raging rapids of the West Country?

We have raging rapids down here? Where?
There are a couple of mildly irritated rivers and that's about it :)

Electric fan is still working well, though I think I probably have an 82 degree thermostat, which gives a bit more flexibility on the fan switch used than the genuine thermostats that open much later.

No real change to the fan - it just does its thing. My radiator started leaking from the top tank though. I would have loved to get the GEMS alloy one and tweak my plumbing to suit - as there is room to do so with no viscous fan. Unfortunately I don't have the time to do that the way I want (modifying the outlet spout etc), as I'm using it every day at the moment and I'm hopefully about to buy a house - so sticking tried and true Nissens is what I've stuck in there for now.

I noticed though... something looked a bit odd about the radiator I took out: 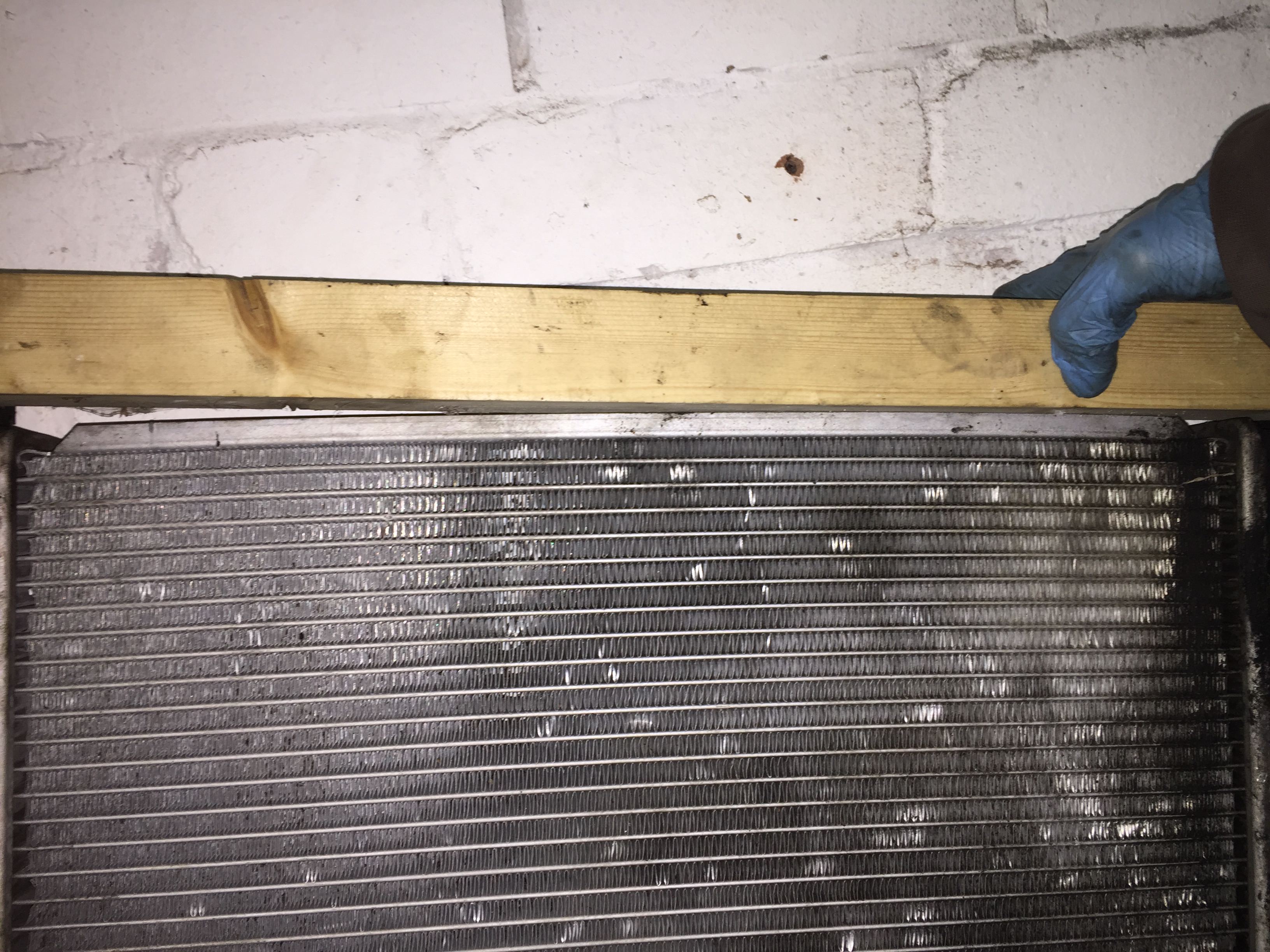 The timber is straight... following on from Mark's condenser reshaping - who knows how this one got like this.

Also took it as an opportunity to deal with a few other problem areas. Spout was leaking. Turns out it had no o-ring, but had what looked like a proper paper gasket. Another little oddity of its inception maybe? Has the o ring now, and a little bit of RTV for good measure... 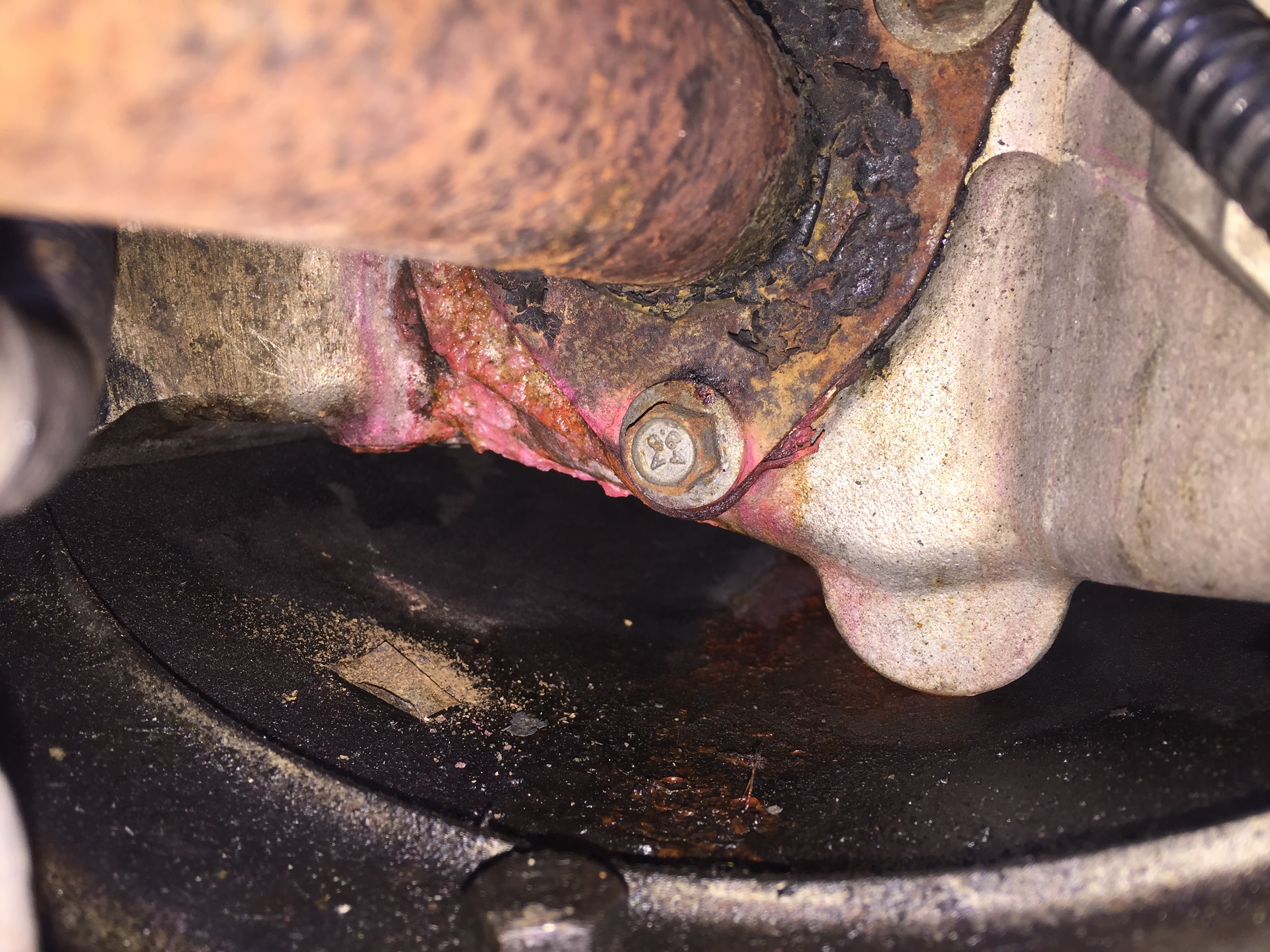 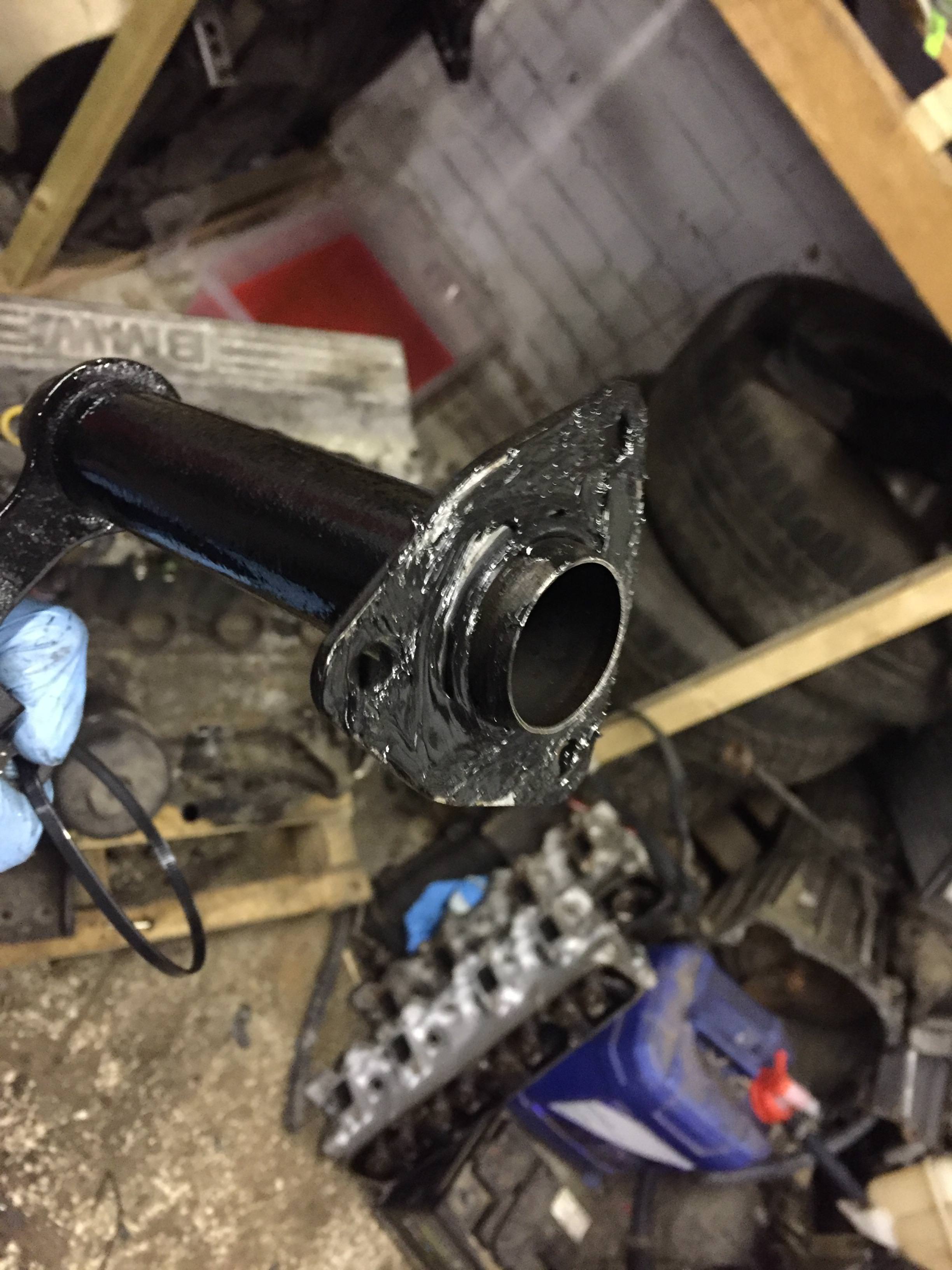 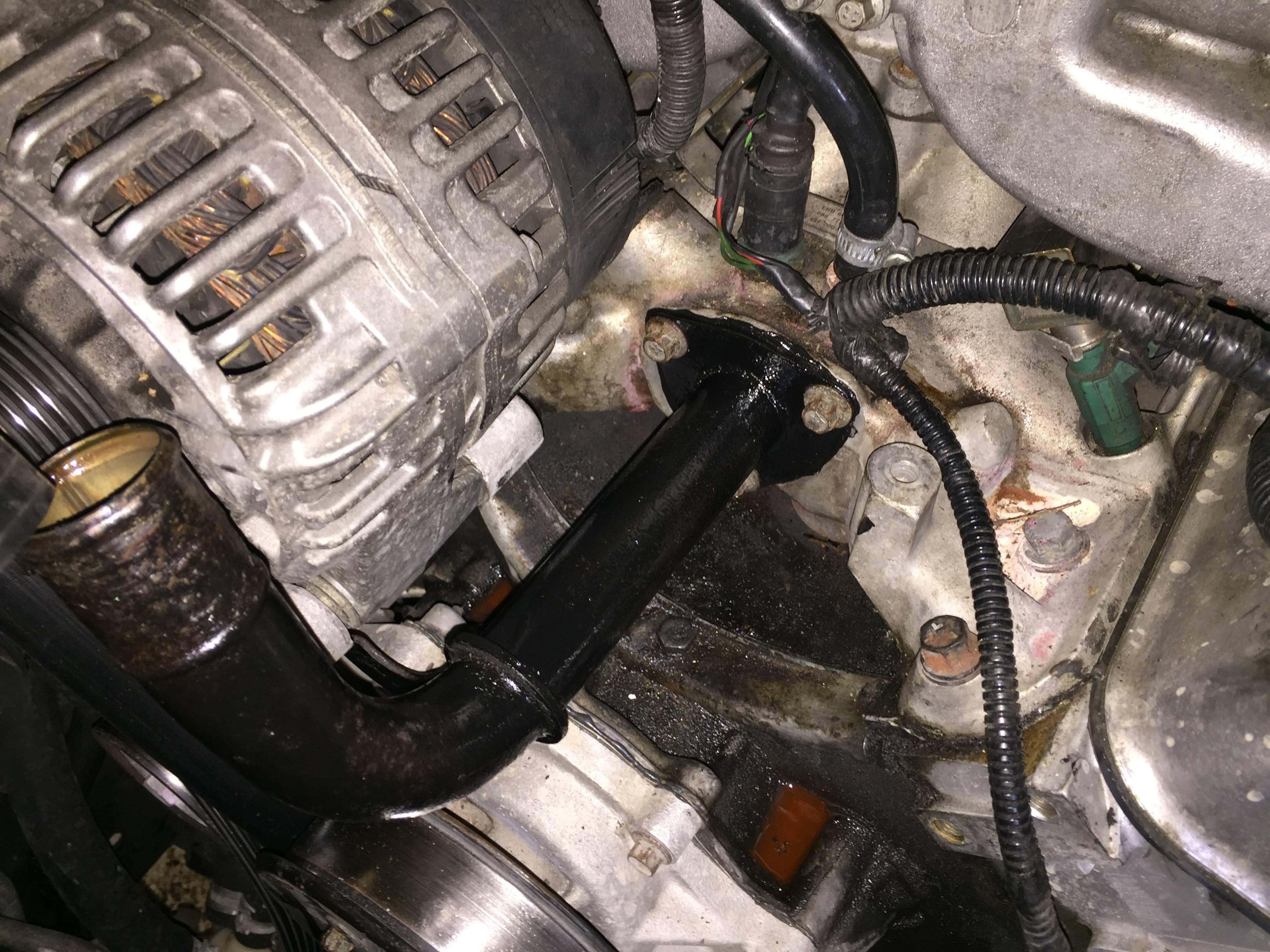 And a lick of paint after some wire brush treatment. It is a bit pitted in places, mostly where it has been leaking, but the RTV will deal with that.

Why would someone put a paper gasket instead of renewing the O-ring, the mind boggles at some people’s stupidity.
At least you know it’s sorted now,,

When I bought a head gasket kit with Elring head gaskets there was a paper gasket for that fitting in the kit. No O rings for it, but I had them in my O ring kit.
Strange, but I can understand how it might have got there.

I had the same, though the paper gasket that I had didn't quite fit that spout properly.

I had looked up the parts on my trusty parts website, and saw it was supposed to have an O-ring, so bought one as part of my engine build. But I get what you mean about the head gasket set. I wonder if it's for a GEMS or even a Classic.

It seemed to have a bit of everything and not enough of some things Marty. Certainly had GEMS injector O rings in it, though the kit was advertised for a Thor.

Hi,
I know this is a bit old thread.
Anyway, I too am looking for this conversion for my diesel and first hurdle is the 105A alternator. I'm trying to get a 150A one just like the V8 and failed with BMW alternator as they are PWM controlled. So must try with RR V8 alternator.

Tell me more about the performance, like say have you tested it with outside temps above 35 / 40 C?
With full AC and blower fans on max setting and idling in traffic etc.