rangerovers.pub
The only place for a coil spring is up Zebedee's arse

I keep getting an Alternator fault coming on my dashboard but the car runs fine for the time being. Suspect that the Alternator is on its way out.

Which brand would you recommend as a replacement?

I'm normally parked on the level at home and other than slight ingress in the boot, the cabin stays bone dry. Yesterday I had to park facing uphill and we had heavy rain during this time, come late last night and I'm off to fetch the wife from work and instantly hear this gurgling sound which progressively got quieter after 5 or so miles, wife opens the door to get in and spots the water on the floor straight away.
So the noise I heard was, I guess, the fan I noticed when changing the pollen filters last summer, churning the rainwater that had got in there and flung it out the foot vent?
The p38 is quite new to me but can anyone confirm my thinking that rainwater in the fan housing can only get there via the pollen filter lid?
It's never leaked in before but this is the first time it's been parked facing uphill which may be a clue..
TIA.

Joined as I met Gilbertd in a petrol station in Wisbech and he told me about this place as we were both filling up with LPG. I have a 1998 Vogue SE - the first of the three special editions, and one of only 220.

I'll put up a thread about it soon.

Should the indicators flash when I lock the car?

Am I dreaming or thinking of another car? I'm sure the indicators on my Vogue used to flash when I locked or unlocked with the fob but they don't now. Everything else is working well. It has a new latch in the driver's door. Am I imagining flashing indicators?

is this as straight forward as it seems? just follow the Rave and done?

i've replaced the shocks on my Discoverys, so familiar with the procedure. but i just want to make sure there are no surprises the P38 will throw at me.

Folks,
I really need to properly diagnose the cold start issues I've been getting recently. I suspect it's related to fuel pressure leaking away overnight but my fuel pressure gauge doesn't have an attachment that fits onto the valve at the back of the fuel rail.
Does anyone have any recommendations please? Preferably something cheap :)
Thank you!

Got sent a link to these and thought they were worth sharing.

I am interested to know whether there are many alternatives, if any, to lock the car without using the key fob and just using the key.

The reason I ask is that quite a lot of times that I leave my P38 the key fob won't lock the car, and I don't particularly like using the key because I get the impression that the key will throw up errors, such as engine immobilised, or press buttons whille key is in the ignition. If the car doesn't lock with the fob I tend to leave it unlocked, which is not the best option.

I have one of Marty's RF filter fitted, and the car locks and unlocks every single time that it is parked outside my house, but go near somewhere where there may be loads of RF signals and I just can't use te fob. I have new handles and door latches fitted, but sometimes the car will lock with the fob, but not unlock, I have to use the key. Then, quite often, when I go to start the car the first turn of the key does nothing so I have to take the key out of the ignition and go again, at which point the car usually starts.

I would like to find a means that might be 100% reliable. I know that I saw something about using the US key fobs, using the US frequencies, but from the brief bit that I read there is quite a lot to changing the key fobs to US spec. A more simple answer would be preferred.

Maybe I can program out the immobilisor with Nanocom ? I suppose that would help, but ideally the possibility of by-passing the EKA software would be the best choice.

I would be interested to see what other members views are.

I've decided to create this thread to document my efforts at creating a replacement for the GEMS MAF. As some of you will know, the GEMS MAF is unavailable anywhere other than landrover (if its even still available) and costs a fortune. Aftermarket units are junk. After buying probably 4 or 5 used MAFs at this point, i wanted to find a solution.

My thinking is simple. If we can figure out the curve, we can build a "module" which can translate the values from some other cars MAF, over to signals the GEMS ECU expects.

Having had some background in tinkering with 2000's VAG cars, i know that their Motronic 7.5 ECU's contain a 512x1 table which contains the MAF calibration in a very simple format: kg/sec against voltage. As such i have curves available for many common VAG MAFs. Those VAG MAF's are ubiquitous, readily available, and cheap new. I also already have a few units knocking around i can use for testing. Half the problem is thus "sorted"

If we can acquire the same curve for the Lucas 20AM, we can then create a translation table between the two.

Trying to find this information online seems pretty much impossible. Tuning info on the GEMS is rare, and i havent been able to find the factory calibration anywhere. However when replacing my broken MAF with yet another used one recently i noticed something potentially useful. RAVE provides airflow figures that should be seen at various engine speeds. One reason i know my newest-old MAF is junk is that it massively overreads against these figures. However while staring at the Nanocom, i realised it was showing both airflow in kg/sec and MAF voltage...

My first attempt then was to drive around, and use the nanocom logging function to log these two values. Unfortunately nanocom updates extremely slowly and seems to only pull one value at a time, which means the displayed airflow and voltage dont line up in time, and thus its all a bit random. Perhaps with many miles of logged data, we could get something resembling a curve, but i wasnt happy with this approach at all.

Spent some time thinking about it, and threw together a MAF "stimulator". Essentially its an Arduino Nano, and a MCP4725 DAC. The arduino is programmed step from 0v to 5v in 0.3125v intervals. Fishing about in my box of parts i found a matching connector for the harness MAF plug, so i can plug this contraption in, inplace of the MAF. The idea being that instead of driving around, i can just sit on the drive, ignition on, engine off, and feed in the sequence of voltages and log the output. 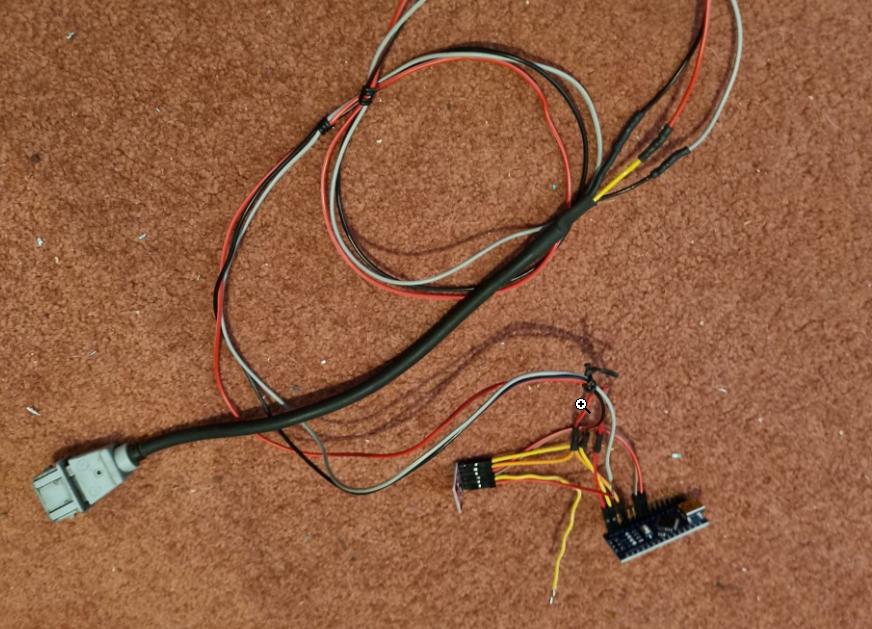 So, tonight, i went to give it a try. And, provisional results are that it worked, kinda! Nanocom kept disconnecting, and i realised the battery was flat, which potentially was causing the nanocom weirdness, however i managed to capture a bit of data before i gave up with the battery down to 7 volts and went and fished out the battery charger instead.

Interestingly you can see the lag i was talking about in the log due to how the nanocom polls each value. In order to try and minimise this, i'd set the Arduino to step the voltage once every 10 seconds. It appears to update the voltage first, then airflow shortly after. 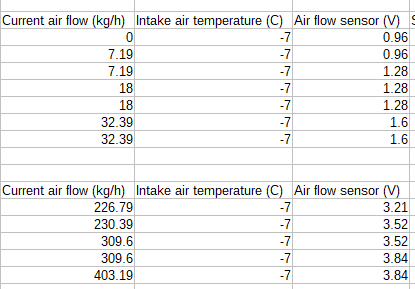 As you can see it was a struggle to keep the thing connected for more than about 30seconds, but you can also see some nice clear data points. Will revisit later in the week when it has a charged battery and see if we can capture the full sweep.

I can't remember whether I asked specifically about this subject, so I will risk asking again !!

I read, on the RR P38 facebook forum thingy, that both the diesel and petrol P38's use the brake light switch to help control the cruise control. I wonder if someone can confirm this ? My CC isn't working although the switch lights up. And I know that the diesel doesn't use the vacuum tubes, like the petrol vehicle. But, perhaps the brake light switch could be the problem ?

I recently bought a 95 2.5 diesel which has several problems. My current problem is the message center is frozen with mileage (kilometers) and fuel efficiency. Thats all it displays... When i get in, when i turn the key, when the engine starts. And the mileage and efficiency dont change with driving. I also, obviously, dont get warnings or any other info. Any help as to where to start would be appreciated.

Is this just a straightforward swap for my current two exit rear pipes? I'm not keen on the bad designed t junction on the current setup, single pipe looks to have better flow.

Does anyone have a company in USA that I could get to appraise the LINLEY?
Been through a number of places and they all range between $10,000 to $23,500!!!! Obviously they base appraisal on the P38 with a small premium on it being a “special” vehicle.

My car has a sad cup holder like this:

Its rubbish as its too shallow and cups fall out.

I came across this however (ignoring the ludicrous price):

Much deeper cup holes... Was this a later revision? Or is it some sort of aftermarket addition?

Doing a bit of exterior TLC, i painted up the trims along the top of the door as they were badly faded, and now the rear window trim looks awful.

Anyone know how it comes off?

It had stood for 2 years or so but I have managed to get it to start.

It was parked up as the EAS had stopped working and the owner intended to put it onto springs but had lost interest in it.

I'd like to get the EAS up and running and using the very helpful Beginners guide to EAS have established that the thermal cutout in the pump has failed.

Can anyone advise where I can get hold of one please?

I can buy them from Mouser online at about £4 each but it's £12 P&P on top. If I have to but it from them does anyone else want one as a spare aso w ecan split the shipping costs?


Warranty of a warranty?

On the way back home after Easter, we noticed the Hairy Exhaust issue had returned. You probably don't remember that I had the backboxes replaced four years ago and the parts had a two year warranty. The first pair were replaced a couple of months outside warranty (Garage was shut during Covid lockdown) and the replacements have now dumper their fibreglass out of the tailpipe just like the first lot.
Is it worth a go to get the new set replaced like the last lot?