rangerovers.pub
The only place for a coil spring is up Zebedee's arse.
Name the vehicle without it's body on... 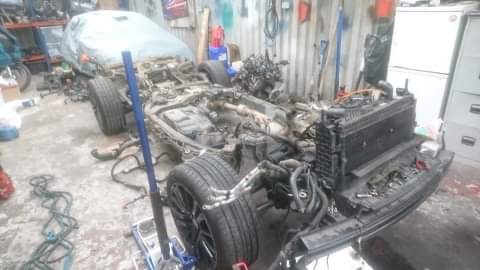 I was asked the same question on a different forum... I nearly submitted a guess which would have been correct but didn't guess and failed lol. If the pic had been higher res I may have submitted my best guess.. Reckon some of you lot will do better than me!

Probably wait til we've had 3 guesses before naming the naked vehicle.

From the air spring on the front, the wishbone suspension and the separate chassis, my guess would be either an L322 or a Disco 3 or 4, most likely a Disco.

Jesus, I can't make out anything on that photo let alone an airspring!

Discovery or Range Rover Sport are the usual suspects when it comes to body off to do anything serious. Allegedly its a couple of hours to come off and 3 hours to go back on for folk with the kit and knowledge. Hmmn. If you believe that I can do your a wonderful cash deal on a bridge!

Thought the L322 was unitary body with suspension on subframe units. Now if I'd not been fighting shy of doing owt to her ladyships TD6 for years I'd know!

Last time I did a body off job was on a Reliant Regal 3/75 to swop the chassis. Everything light enough for 17 1/2 year old Clive to move on his own. Scissors jack, four blocks of wood, screwdrivers, ring spanners, open ended spanners and a couple of tyre levers. The Clive toolkit was a bit skimpier in those days. How to keep occupied on a sunny weekend.

As the RR Sport is essentially a Disco in dancing clothes why do they call it the Range Rover Sport rather than Discovery Sport?

why do they call it the Range Rover Sport rather than Discovery Sport?

Because they called another one the Discovery Sport and market it as the replacement for the Freelander when really the Range Rover Evoque is just a Land Rover Freelander 3. Who knows what their current range line up is about. Seems to me they've got far too many models all going for the same market.

but... those kids aren't going to WALK to school you know!

We've had a few guesses now so it's time for an answer... Which erm I hope I've got right lol.
I've been told by a mate of the guy doing the work that it's a diesel L322. I asked for confirmation - he reckons it's definitely not a Disco it is an L322 (*edit - he didn't say L322 he said Rangerover), and he'll find out a bit more about it tomorrow (Fri).

It's a crap pic really, things I recognised most from looking around and underneath them are the front curved undertray bit and position/design of the petrol tank (that I've had to fit fuel returns to on Jag engine'd models), the curvature of the chassis. I nearly guessed L322 but didn't submit a guess so automatic fail. If I'd noted the front airbags it might all have come together to me to chance a guess. I'd provide a link to the original thread but it's on that Elgrand forum which you can't see properly unless you're a member.

*Edit - Just thought... All the Range Rover Sports I see are petrol (and usually supercharged) but do they make a Range Rover Sport in a diesel? In which case as far we're concerned that'd make it a Disco? Ah well, further clarification hopefully tomorrow!

Hmm I still haven't been told whether it's a full fat Rangerover or a Sport (Disco).
Thoughts?

Thought the L322 was unitary body with suspension on subframe units. Now if I'd not been fighting shy of doing owt to her ladyships TD6 for years I'd know!

At this point aren't you supposed to crawl under the TD6 to see if it seems to be the same vehicle Clive ;-) ? lol..