Sloth - I see a toaster will be part of your build...in lieu of glow plugs?

Don't be silly, can't you see he's building it in his kitchen?

It's going to be an arse to drive it out of here... but I have snacks

You've just reminded me that I still need to replace my manky (fan-less) trans oil cooler.

I also need to buy an engine oil cooler for the Scimitar project...

I still haven't put this fan back together...

Instead - I've taken a very angry sounding Hydrovane compressor to bits too, so that, the fan, and a load of ECU wiring is spread across the bench... I should really finish one thing at a time.

Thanks again Smiler for letting me photographing every little detail of your P38's engine bay - has been invaluable already.

So yeah - don't bother trying to service a sealed Spal fan motor. Was worth a go... but now I'm on the hunt for a new fan.

no worries, if you need any more photos of anything just let me know and I'll take them for you.

Sorry... I have been distracted pissing around with the V8 and it still isn't cooperating. What should have just prolonged its life a bit longer hasn't really worked out, so this might be moving back up the list to just dump the boat anchor.

That's neat on the PIC controller. Ultimately, long term I'd still like to go the CAN-CAN route long term, what I really need to get some more data on that is an E39 diesel auto to see what is going on. Typically nobody I know owns one, and the E60 spits out a different set of data.

Would you be open to sharing any of your work on the PIC controller/converter? It would be great to be able to look at making something like that work with the non-CAN gearbox controller to start with and get things moving. Hardware wise, we can likely build - PIC code on the other hand isn't something we've dabbled with much.

Cruise control is definitely on the list of things to make work once I the engine is in and running, so I'll be posting up the solution to that once we've figured it out. I know we were having some weird results on diagnostics when feeding the canbus speed back in, but it seems like it just needed some tweaking to get it right._

Just ordered a STG-800 Barth controller for another job, I will have a play with the CAN data from the DDE4 and the new Arduino setup in the Barth
as for the code for the gearbox controller no problem sharing. What do you want to know, the PIC code may be a bit of an overload , maybe easier to start with the signal format.

Did you find the CAN data you fed into the DDE4 to get th speed working ?

I'm also trying to get cruise control working on my M57 converted 90. I would be very interested to know what CAN data you guys have been feeding in for road speed. I've tried using id 0x153 but not having any luck at the moment.

Another thing to note about cruise control is that the ECU expects the road speed and engine RPM to correspond correctly for a valid gear selection otherwise it will drop out, so I plan to manipulate the speed signal appropriately. I believe it also needs opposing signals on pin #24 and #28 of the x2414 connector to signal that the brake pedal is released.

We'll have to get the ECU setup on the bench again and feed it all the signals we had last time emulating a running engine - and I'll report back. We definitely had road speed being reported through diagnostics.

Parts are being collected, though I'm missing some fairly important bits like a gearbox adapter plate currently...

I think all I need now is the conversion kit from Ashcroft and I have all the important bits to actually make a start on this. Of course, its still out of stock.

Has anyone had any experience dealing with them? I seem to be hitting a bit of a wall.

Give them a bell and speak to David Ashcroft. I've dealt with them a couple of times and they are extremely helpful.

I am talking about 8 years ago or more when I got Ashcrofts to fit my HP24 box. I then dealt direct with Dave Ashcroft and he couldn't have been more helpful. He even gave me a guided tour around his factory.

Your request may be landing on someone else's desk. As Richard said contact him directly.

Although I have never met him or his facility, I have only good words for them. They have always been extremely professional and kind.

Yes Ashcrofts are very good, I have used them many times. Most recently for a special 1.1:1 ratio gearset for the LT230 transfer box as I have coupled my E39 M57 engine to a six speed manual gearbox from the E46.

I've had another go at getting vehicle speed data to the ECU this evening.

After a bit of research I found what I though was the correct format that the ASC unit would send, but nothing appears on diagnostics.
I have sent ID: 153, Data: 0 85 1B 0 0 0 0 0.
I believe the speed should be on byte 1 and byte 2 and this data should represent 55km/h. I'm thinking perhaps I need to also send individual wheel speeds instead/aswell? BeaDy what data did you try sending? I now wish I'd kept the ASC unit from the doner car to have a play with.

I've only been dealing with them via email - I haven't really had the time to call directly. I thought I was getting replies from Dave - but I don't know if it is a generic reply-from address etc. Responses just seemed a bit vague. I've only heard good things otherwise, just seemed a bit odd.

I did get a response this afternoon though - hopefully it won't be long until the M57-ZF kit is available again. It is literally a case of the money burning a hole in my pocket at the moment... and a fairly important part of this build. Wiring and electronics I can do, engine mounts, plumbing, all that isn't a problem. Fabbing up a gearbox adapter and the other bits and pieces to join them them together.. bit beyond me.

Re. the road speed - I'll try and have a play with it on the bench this weekend. From what I remember, I didn't think it needed the right rear wheel speed sensor input directly, I thought it was purely over CAN from the DSC/ABS ecu on my E39. I did at one point have that connected too, but I can't remember if we managed to get it to spit anything of use out. Will revisit and report back.

So I've made a small amount of progress with the cruise control. My ECU is also a DDE4 and it came from an early 2000 E39 530D, but mine actually appears to accept the pulse input (Rear right wheel) directly into the ECU. I thought it was a long shot but I tried sending a square wave on pin 22 and to my surprise the vehicle speed showed up on diagnostics. 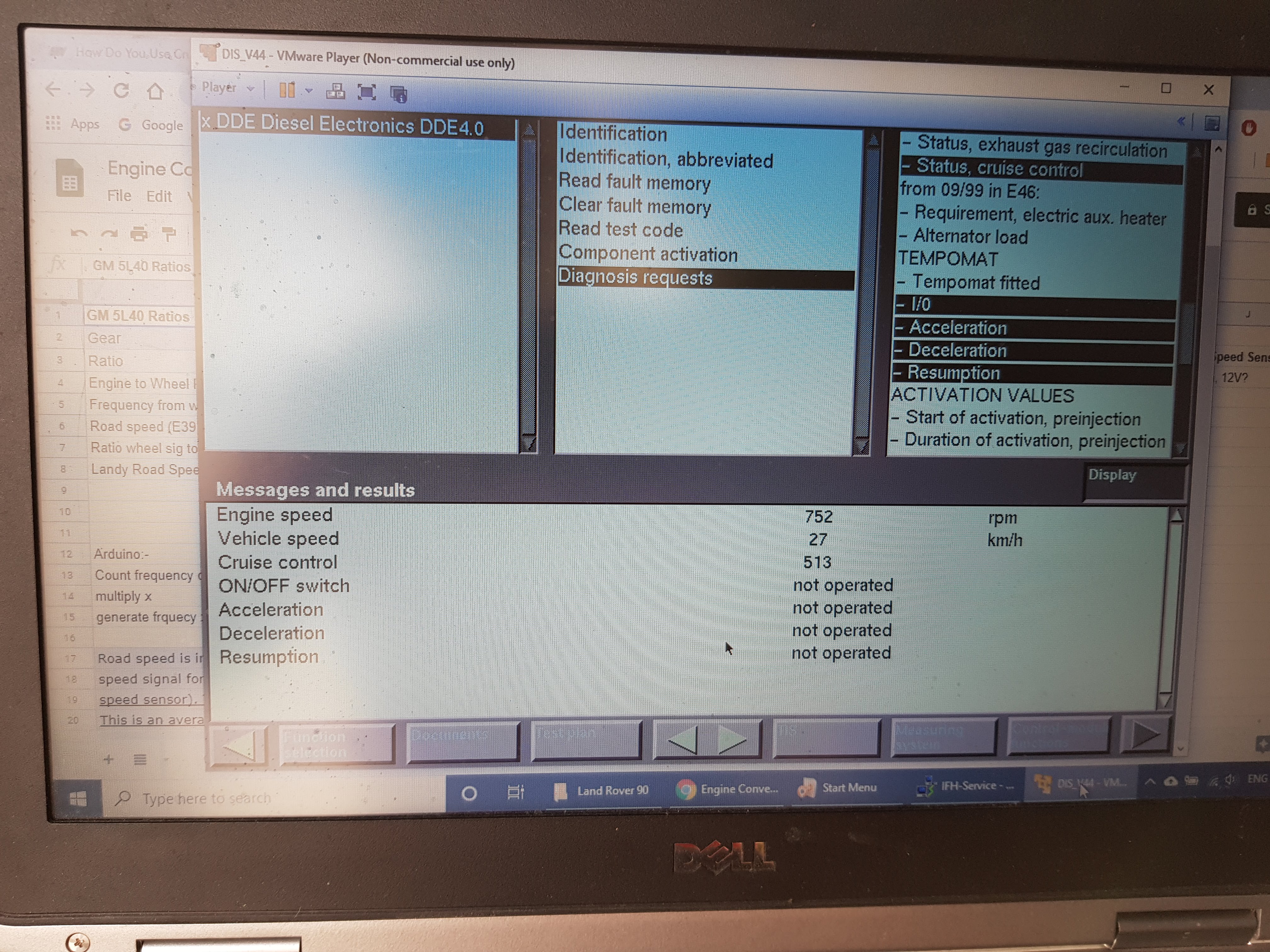 I am struggling though to get cruise control to activate. In DIS there is a "cruise control status" field which returns a number but I have no idea what it means. I have connected the BMW steering wheel buttons and the button pushes show up on diagnostics and the "status" number changed when I toggle cruise on and off. The status value changes again with brake pedal signals, the number must mean something?

I know that cruise will only activate when the ECU is happy that a valid gear is selected. In the manual car this is simply comparing engine rpm and road speed but my engine is from an auto, so perhaps it communicates gear selection with the GM gearbox on the CAN BUS. So many unknowns make it very difficult to diagnose the problem. Diagnostics also show "clutch pedal operated" but this is an auto ECU and the relevant ECU pin doesn't have a wire in the connector for the clutch switch.

Interesting - I'm sure we weren't able to get road speed to appear when feeding a signal in on that pin.

My ECU is also from an auto, but from a 2002 - WDS does suggest there was a changeover of quite a lot sometime in 2000 so perhaps that's why.

In other news - I finally placed my Ashcroft order yesterday as the kits came back into stock. And then I realised I think I'm going to need to change the gearbox to use the GEMS 4.6 TC. By the time I've done that, everything that could have been making the squeaky noise will have been replaced...

Some exciting things have appeared: 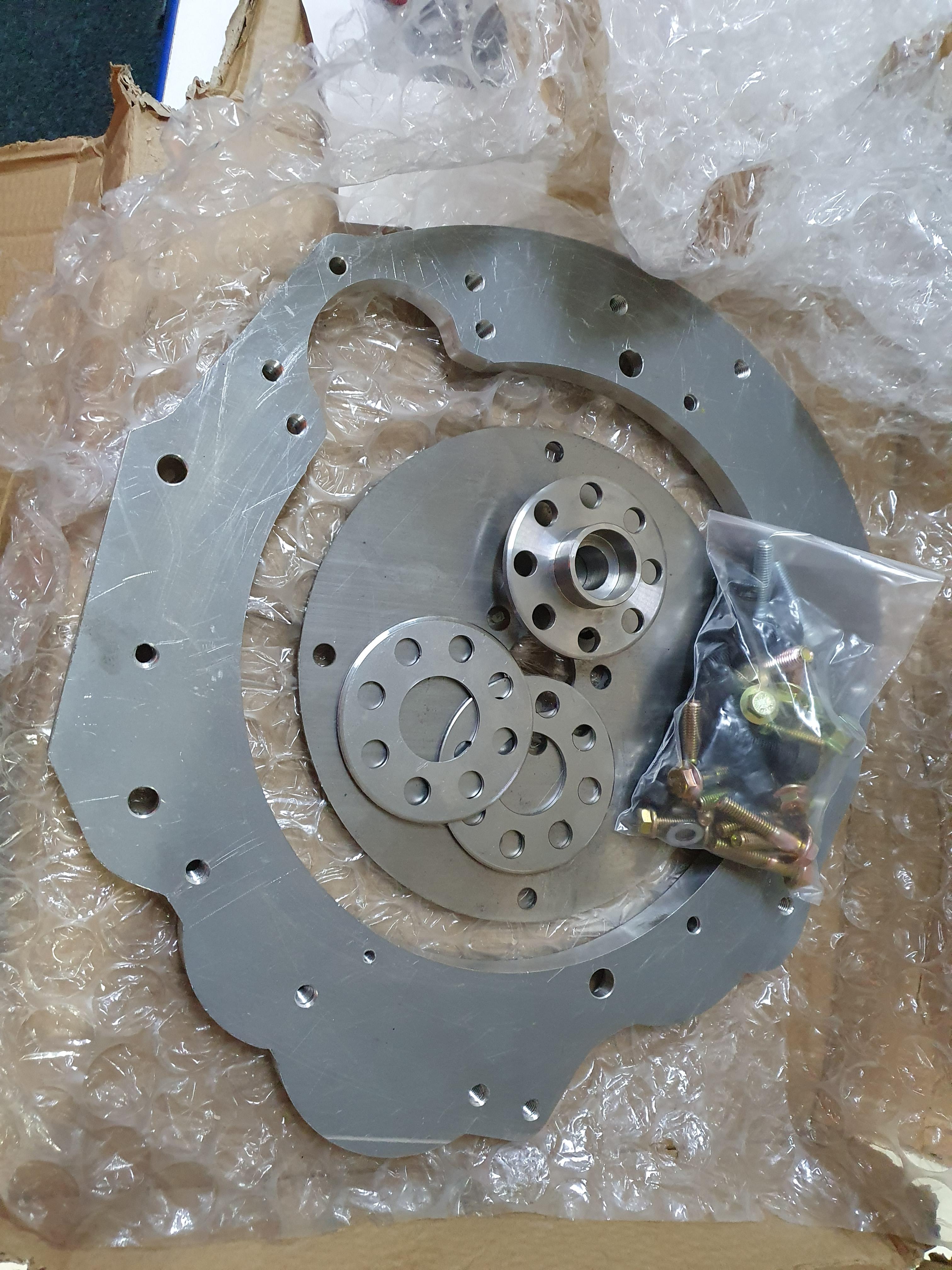 As part of the swap I'm also going to be changing the gearbox for a whole GEMS 4.6 (either 061 or 064) gearbox, so one way or the other - the silly noise I've been chasing should be history.

"all" I have to do now before starting the swap is cut up the M51 and M57 sumps and stick them together to clear the P38 diff.

Of course, the V8 has heard of its imminent demise - and has responded by killing both the alternator and battery. Thought something was up - despite no battery drain problems (funnily enough ;) ) I'd had it plugged into a Ctek while it was sat for a few weeks, and it still struggled to start last week. Few days later I'm jump starting myself every time. Dead cell in the starting battery, and the alternator is down to 13.1v. Boo.