Why would I give up?

The M57 is a good engine - early and late versions. If they weren't, there wouldn't be as big a following for conversions in LRs and other vehicles. The fact they're relatively modern with 'scary wiring and ECUs' compared to janky archaic V8s is frankly welcome to me.

Sure, massive power would be nice, hurr durrr stick a big V8 in it, but why? It has the aerodynamics of a brick with the handling to match, weighs as much as a small moon, and fuelling it is depressing.

My conversion is running, driving, and doing everything I want of it, and is costing me less than LPG did...? I drive it every day over my 5 series now.

Yes, I'd love another V8 in my life, but it sure as hell won't be of the Rover variety, and it'll be in something fun to drive for driving pleasure only.

So what is left to do on it?

Oh, and I have a 3D printer now if you need anything knocking up (assuming you don't already have access to one).

Currently I'm working on another controller - this one will take the engine coolant temp from the CAN data of the M57 ECU, and drive an emulated signal to feed into the BeCM and thus get the temperature gauge working correctly. It will also control my electric cooling fan. This avoids having an original P38 temperature gauge sender in a hose, and a fan switch. It will also have the capability to deal with the A/C demand/grant signals properly, so the engine can decide to cut off the A/C under heavy acceleration, overheating etc.

Few advantages - one, no need for two additional senders in hoses, two - I can choose the exact temperatures I want the fan to come on at, and exactly how the temperature gauge behaves. It will also have failsafes built in - so if the sensor on the engine fails, the gauge can show a fault condition, and run the fan constantly. Similarly, if there is a fault with the CAN data, or even a failure in my controller, the gauge can give a visual indication of this - I'll demo it all in a video some time.

After that, I need to look at the intercooler again. The exhaust downpipe really needs a better custom one making up too. A/C as mentioned needs pipework.

Other than that... I've actually been looking at the full nudge bar I've been repairing to go on again in the last week or so - just as a slight change of attack :)

I've started looking at the speeduino DIY ECUs (a cheaper alternative to the Megasquirt DIY ECU) for the Scimitars Jag engine. Jumping the gun a little bit but I can't progress much on the car as apart from it being dark and wet outside the car is at my parents and we are in lockdown. I have designed the throttle bodies adapter manifold and am all set to start printing as soon as I have made an enclosure for the printer (bits on order). Also looking at making the doors lighter and again waiting on material to arrive.

Love to watch how people overcome problems. I've got a spare M51 now and I'd love to do LPG on the inlet side as I've seen before to get the much cleaner burn. Can't remember what it's called but I did see an article of a bloke that did it with a Disco.

That looks like it. I read that it causes the diesel to burn much cleaner at around +90% so if that's the case it should reduce the smoke a fair bit. I'll find the links but I saw a P38 fitted with it that the Polish guy claimed around 1200 miles from LPG & diesel on a full tank of each.

PS. That's for common rail, so ok for my Q7 but not the P38. Probably needs a different adapter

That's the idea but that kit that's for common rail. It's definitely an interesting concept. The one I read about put LPG into the intake air on a P38 and I also read about a Disco that had the same thing fitted LRO monthly last year)

Yeah, the second one, the cheaper one, will work on any type of diesel. It's a single point so just has a venturi in the air intake and introduces the LPG there.

Apart from about two weeks where I dug the BMW out of hibernation to drive it for a bit - I have still been driving the P38 every day. And after a deer ran out in front of said BMW at 3am doing a number on the whole of the front end... I now have no choice :P

Still going great. Recently found a considerable amount of missing low-down power after adjusting the VNT actuator again. Now I'm pretty sure I'm up against exhaust restriction, so that is the next thing to sort out. 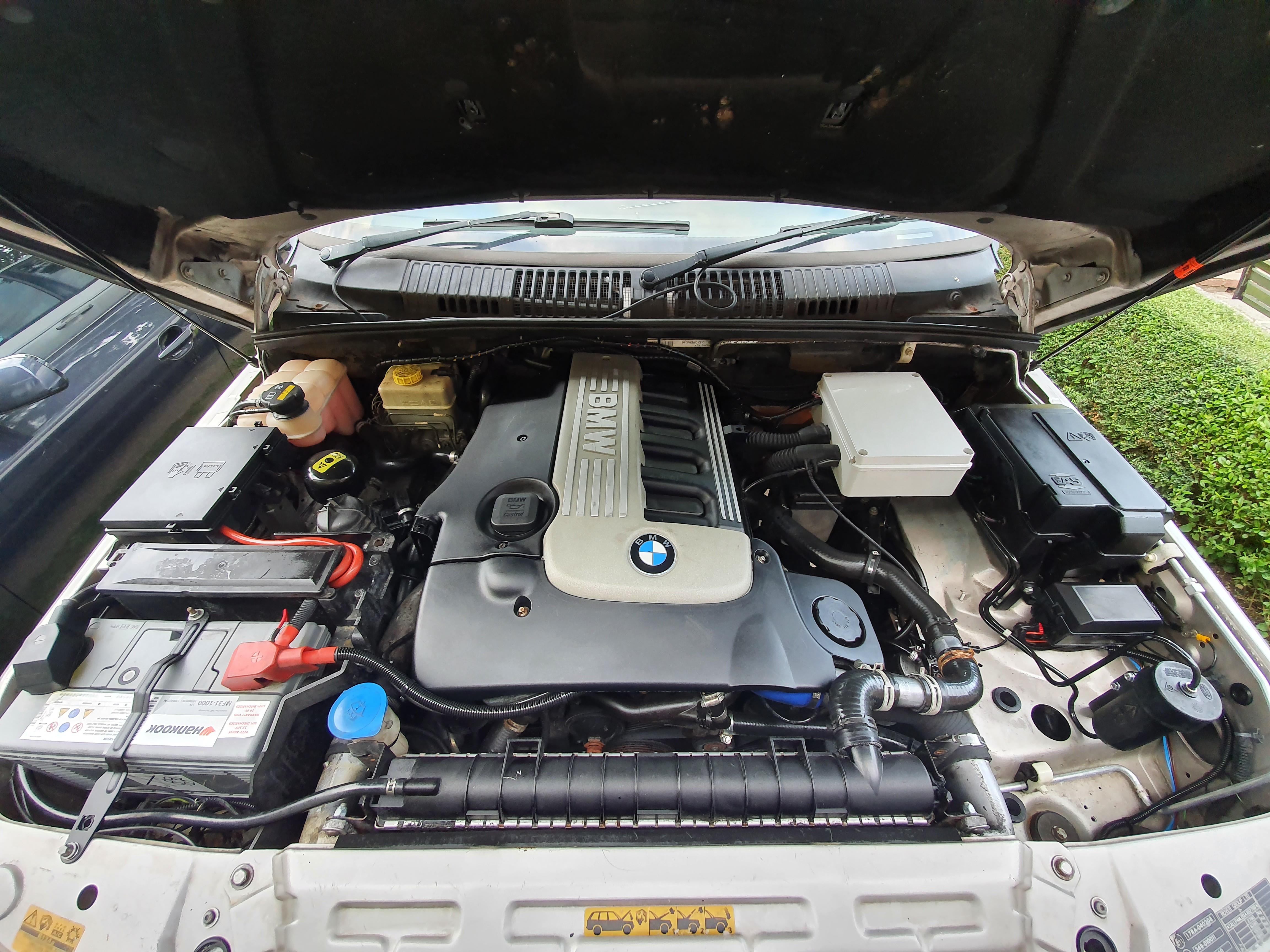 Next up is AC pipework. Need a custom suction port fitting for my compressor machining - once I've got that, it will all go back together and I'll fill it up.

Factory Fresh!!
That is some amazing attention to detail, congratulations again :D

Amazing job. No doubt you have covered this, but what have you done for an air filter?

The air filter is actually hiding inside the airbox that makes up part of the engine's top covers - its the hole front to back side behind the oil filler. The air intake to that you can see to the side of the engine - one day I might duct that to somewhere cooler but for now its working well enough.

AC... one custom suction port fitting prototyped and ready to be machined from aluminium shortly: 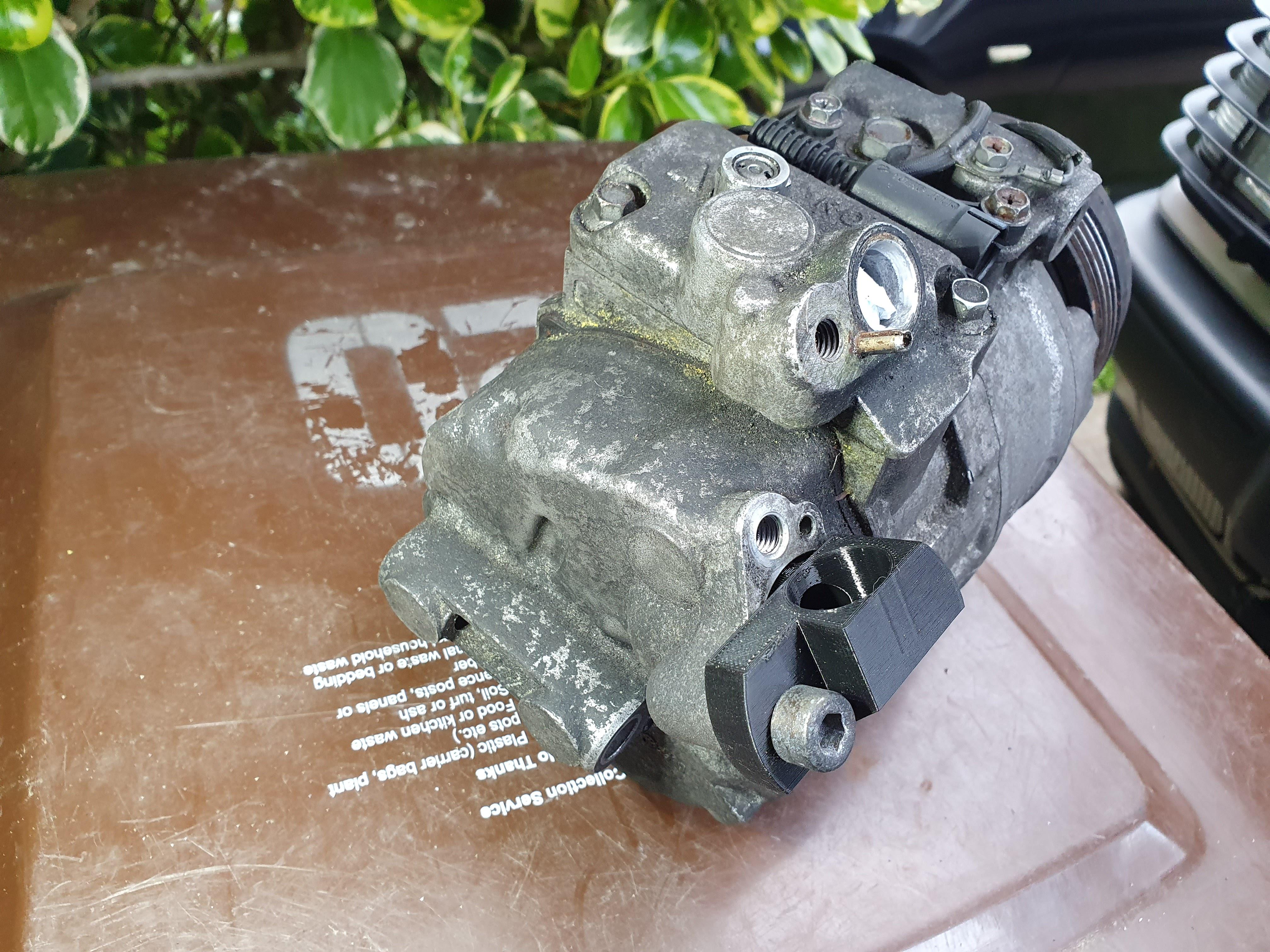 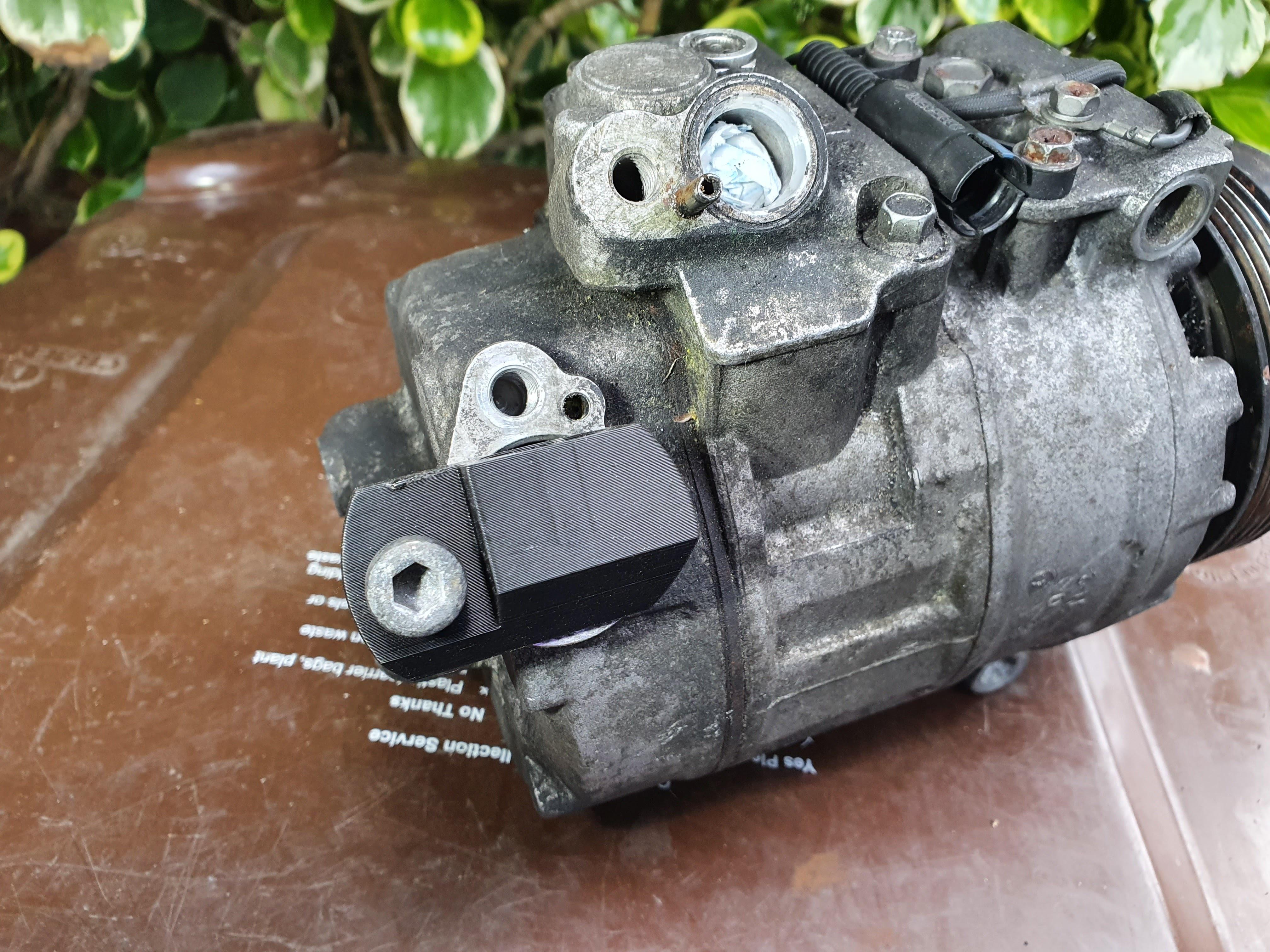 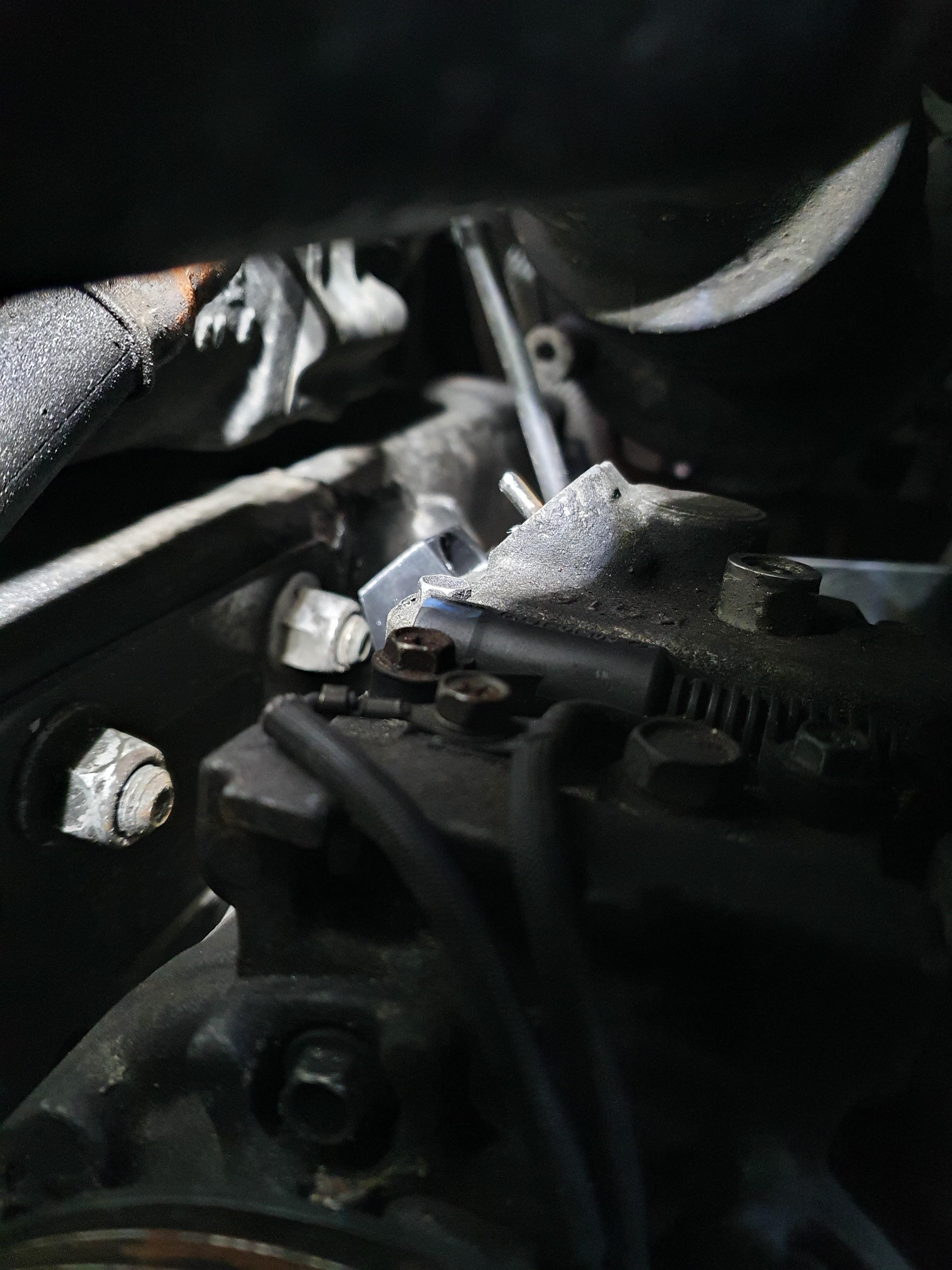 I will be using the V8 pipework setup, with custom soft lines between the compressor and rest of suction line (the big one) and the condenser. They will come out the front of the engine between the engine itself and radiator/cooling fan.

I've seen some have used the P38 diesel setup, but usually they have removed the airbox from the engine to give space. I'm not doing that, and I don't like the way they would sit. Hence going the long way around. I think the charge will be about the same as the Thor V8 anyway as it all works out to be pretty much the same length.

The steering box bolt will be swapped around so the head is on the inside, just to give it a bit more clearance for my peace of mind - but there is more room than appears in the picture.

Yeah its a similar capacity compressor thankfully, so it should be up to the job. BMW used the same one on the E39 as they did on the E53 X5, and its very similar to the L322 one.

But the E39/early E53 have a huge 28mm suction port for some reason. Could go the late E53 or L322 one, but the port is in a different spot that is more of a pain to work with - and I have the E39 one already. Either way, the actual suction lines are the same so I have enough bits to marry up with some Eaton pushfit hose bits to join it all up. Once the fitting has been made :) Hopefully next weekend's job.

I have a nice unopened jug of what I'm going to start calling 'summer currency' at home ready for filling up once I've pressure tested it etc.