rangerovers.pub
The only place for a coil spring is up Zebedee's arse.
Coolant level.

I thought the ole' P38 was leaking coolant through the rear core plugs, long story short i believe the water has entered the bellhousing through the TQ bolt access hole, the rubber bung is missing..

Do you all find the coolant level "settles".

Mine settles at around here, 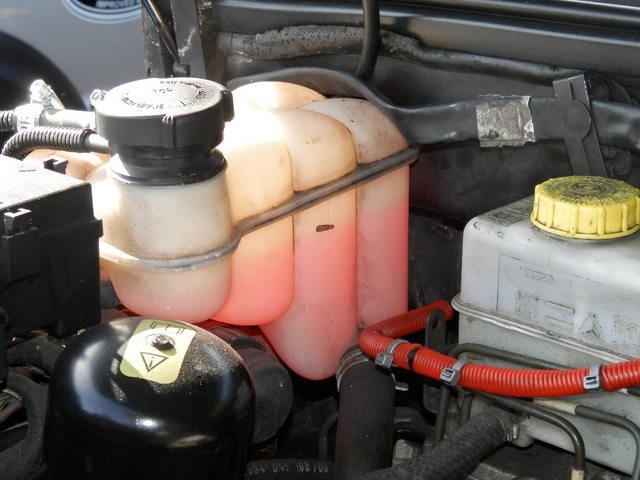 But never goes below?

If i top it off, it goes back down and settles there.

Do you park on a slope nose down?

I do and mine used to play the same coolant settles at 1/4" or so down trick.

Until it decided that the best way to mark its territory was to leak at the joint where the hose from the water pump joins the thermostat during cool-down.

I think you're right, it finds its own level, which may or may not be where you think it should be. Takes a few miles for all the air to come out of hiding, and possibly some sits in a corner somewhere in a waterway and gives you a little too much expansion capcaity. I have now run the overflow from the expansion tank through a silicone tube and down to axle level, as I got bored of cleaning coolant from elsewhere when the coolant system decides to chuck up

Mine doesn't move now it's got new pump and did thermostat at same time.

mine sits pretty much on the half way seam, so I wouldn’t be worried at all about where yours sits,
i ve seen so many threads on water dropping to a level, it needs expansion, hence, expansion tank, lol,

Has anyone tried running with water less coolant and did it make any difference?

No.
I don't see the point. It's also bloody expensive

Waterless coolant is pretty much snake oil when it comes to pressurised cooling systems. Its a less efficient coolant and requires much greater temperature changes to extract any given amount of heat.

With a pressurised water based cooling system you can arrange things so that most of the heat energy being taken out of the engine goes into trying to boil the water against the pressure head. As the energy needed to change the state of water from liquid to vapour is large a lot of heat can be absorbed without much change in coolant temperature. Which makes it much easier to keep the whole engine temperature stable. Theoretical ideal is for the hot coolant entering the radiator to have not quite enough energy to boil against the pressure head and the coolant leaving the radiator to be just a fraction below boiling point at that pressure. In a real system you make sure you have some margin but the temperature can be much more stable than with waterless coolant where any heat extracted from the engine goes directly into changing the coolant temperature.

The raison d'etre of waterless coolant is its much higher boiling point than unpressurised water. So it works pretty well in a crude, unpressurised or low pressure motor with a big cooling system and lots of metal in the block. A big metal block makes an effective heat sink smoothing out temperature variations between cold and hot ends. Lots of coolant rushing round allows the heat to be taken up without too much difference between hot and cold ends. But its still hard to arrange a nice smooth temperature gradient from the bottom of the block, where the coolant enters, up to the head where it leaves. With conventional coolant passage layout having water inlet and outlet at the same end of the motor with longitudinal galleries in block and head joined by vertical passages its very easy to have a short circuited system where the back end of the engine runs dangerously hotter than the front.

For all sorts of reasons our alloy V8 engines don't do well with internal temperature variations so are intrinsically unsuited to waterless coolants. It's a big cooling system so you can get away with it if you don't push too hard or in racing where high power, and high heat, normally goes with high speed so plenty of airflow over the radiator and in the engine compartment to help keep stuff cool. A modern motor designed for waterless coolant will have a rather different coolant passage layout.

Finally, unpleasant though boiling is with steam flying everywhere, it is very effective at pulling a lot of heat out of the motor very quickly. Just need to ensure coolant flow is continuous and all the passages are full to keep drawing the heat out. Much easier said than done. Which is why steam cooling where the coolant turns to vapour inside the motor has never been made to work reliably despite being much more efficient and needing far less coolant than a conventional system.

As usual there are darn good reasons for the conventional fuddy duddy engineering approach. You have to work hard to come up with something that is all round better.

Clive, thank you for a comprehensive explanation. Makes a lot of sense.

Many thanks Gents for the clarification.

That's one hell of a cracking statement :)

I have a random leak from somewhere at the rear of the engine.
I can go weeks (or days) with no coolant loss, then it will suddenly decide to leak from a few drops to a 6 inch puddle.
Only happens when cold..........I did a 1500 mile trip a few weeks back, and it did not loose a bit of coolant.
Cannot seem to find just where from........Thinking head gasket or freeze plug since I believe those are the
only sources of coolant back at the Rt rear corner?
Question is: with gasket or plug, would this issue come and go, or should it be constant?

Bolt, perhaps also consider the front too eg inlet manifold - a leak will run over the inlet manifold gasket, under the manifold itself, and drip down the back of the engine.But if you don't have dried coolant on the composite gasket then that probably ain't it. Also, if you extend the overflow tubing on the expansion tank down to axle level you will be able to tell if there is really a leak, or the coolant is being forcefully ejected

Thanks, I will have a look.
Did about 600 mi in `14 hours straight yesterday, and used precisely No coolant.......errrgh!
Back home on the weekend, and will have a better look
Cheers!

This probably won't be your issue, (you said cold, but...). Last winter, when it was colder than -15C, I had leaks which were caused by the plastic coolant connectors contracting more than my worm clamps. I tightened them which helped, but spring-time fixed the leaks.

Strangerover I've always thought coolant seems to find it's own level in petrol P38s. I don't own one but have released a bit of coolant during fitting LPG reducers and topped it up on hundreds of P38s. Put a bit more water in than was originally in before starting work only to find it's back at the original level after a few engine heat cycles with nothing to indicate a leak anywhere. Without a leak coolant will remain at that found level. Thought it must be the expansion cap venting pressure until there's enough headroom to lower pressure and prevent venting but I'm not sure this reasoning fully adds up. They nearly always come in with coolant level in the expansion tank lower than would be expected on a different model car and plenty owners have said it goes to that level and stays at it.