rangerovers.pub
The only place for a coil spring is up Zebedee's arse
HVAC Book symbol.

I have the dreaded book of doom on the HVAC and have had since I bought her, the issues I can think of are..

2 - All the settings work, even recirculate seems to function

3 - when it does sort of poof some air out the vents it is the same temp either side, so I'm assuming the blend motors are working'ish!

4- The book symbol doesn't seem to come on until the engine is running, then it pops up?

Does it do a self diagnostic every time its turned on and if it detects a fault it throws the book at ya?!

Would a dead fan cause a HVAC book and would this in turn prevent the A/C compressor clutch kicking on?

Likely it is an A/C fault. From memory the system checks the A/C some time after engine start, so a faulty A/C clutch would cause the cheque book to pop up.

Not that easy ... there could be a lot of factors making a fault show up.
The A/C is independent of the fan operation, its engagement dependant on other conditions (engine operation, pressure in the refrigerating circuit, etc.).
When you say the fan ... which one (you got two), have you run all the speeds in manual?
Do you actually hear the compressor kicking in and the fans (engine bay) running?

Lack of refrigerant in the AC will only pop the book symbol on an EARLY P38 - or a late one with the incorrect HEVAC fitted.

This is because early P38s drove the AC clutch directly from the HEVAC (through the safety pressure switches). It monitored the current drawn when the clutch was engaged. No gas would open the pressure switch thus cut off the clutch - raising a fault.

Later P38s changed to driving the clutch through a relay, because driving it directly was frankly a bit of a crap idea - corrosion in connections etc would often cause it to not engage properly. When they did this, the software in the HEVAC was changed to disable this fault detection - because a relay doesn't draw much current compared to the clutch, and this would have triggered the fault otherwise.

As for the condenser fans - ignore them if they are not running while you are diagnosing - on a standard P38, they will rarely come on in the UK climate IF your viscous engine fan is operating properly. They will only come on at low speed if the high side pressure reaches 17 bar, and switch to high speed (you'll know this when you hear it) at 21 bar. With a viscous fan even free-wheeling pulling air over the whole cooling pack, this basically never happens here.

If yours is a 2001 and has the correct/original to it HEVAC, no gas will not trigger a fault for the AC - it is blissfully ignorant of the state of charge and will try to engage the clutch all day long if it wants it, but the safety switch will do the job of preventing actual operation (rightfully so, don't run it with no gas or you'll be looking for a new compressor and flushing metal debris out of the system).

A dead blower - either because of a power supply fault (very common) or actual dead motor / brushes / controller will raise a fault though. Really... as I'm sure you already know, plugging it in with a nanocom or otherwise is the best place to start.

But it wouldn't be a bad idea to check RL6/7 in the fusebox - does the spot in the box look melted at all? After that, the connections in the drivers footwell - there is a plug with two thick wires in it. White green and white purple I think. These are the positive feeds from RL6 and 7 in the fuse box to each blower. Cut them out of their connections and crimp/solder them directly together - this causes a lot of blower stop faults due to corrosion in the connectors. Its probably more likely to be those or the fusebox (or a combo of both) than an actual dead blower in my experience.

The traces in the fusebox are marginal for these feeds - when you add in extra resistance from corroded connectors, its unsurprising how often this happens.

What will NOT cause a melted fusebox however is blocked pollen filters. A blocked filter = less air flow = less worked done by the motor = less current drawn by the motor. Just think about a vacuum cleaner - when you block the hose, the motor speeds up. Why? Because its got less load on it - so it spins faster using the same or less power as its doing less work :)

I'd say one dead blower is most likely. The HEVAC self tests every time you turn on, no feedback from one of the blowers = book symbol. Lack of air would also seem to confirm this as instead of the air from the one working blower going through the heater matrix and out of the vents, it just runs across the car and out the other side where the other one isn't working. To check them you don't need diagnostics, just take the pollen filters out, start it up and look down the hole, you'll soon be able to see if one is turning and the other one isn't.

i had a dodgy fan on mine , replaced the fan and it fixed several issues that seam to persist out side of the fan including the book symbol, but my AC still doesn't work thou, thats either a pressure switch or gas issue , with 4 dec out side today it's not on my list if things to fix.

Can I add to this for the collective experience.

Had it regassed and all was good, ice cold.

I have been using it the last few days and it has become less effective and the book symbol has appeared. My guess is that I may have a leak.

Should I be looking elsewhere?

Does the book symbol disappear when the problem is solved?

If it's become less effective it could have a slight leak (top corner of the condenser being favourite) but that would only bring the book on if it was so low that the pressure switch won't let the compressor clutch engage. Other possibility, if the airflow is poor, is one dead blower which would bring the book on as it would fail the self test on initial switch on. Yes, the book will disappear on the HEVAC once you've sorted the fault as it finds no current faults on self test. 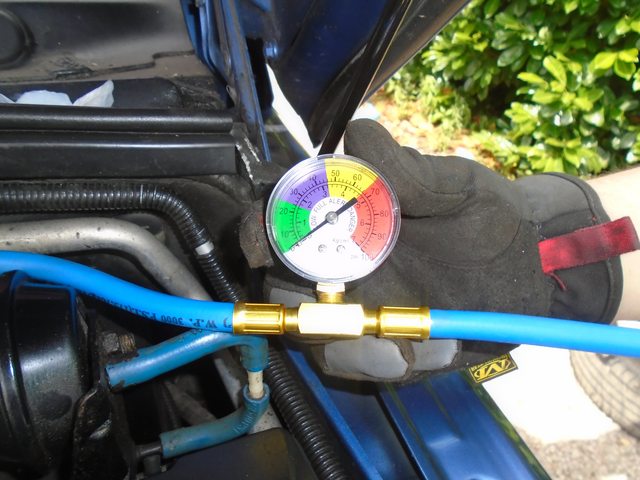 Dead blower fan is a tad annoying, it is the Pax side fan I stuck my hand on it when the fans were on full blast and it was doing nowt..

Managed time at work to vac out the refrigerant and full with Nitrogen, no leaks..

Once that was pulled I applied a vaccum to the system and it held that too..

So new R134a put in and everything seems good..

No idea why it was stone dead empty..

Perhaps the valve in the port you connected to leaks - If so it wouldn't leak with the pressure tester connected.

Gilbert might like to comment, but does all of the pressure testing and vacuum pulling test the schrader valves? It seems to me that the machine can doo all it likes when connected and give a perfectly serviced AC. You disconnect it and due to a faulty schrader valve, your gas leaks out over the next few months.

What pressure did you Nitrogen test at and how long did you leave it? Even the smallest pinhole leak can allow it to empty completely over a period of a couple of weeks. Backing off one coupling and watching the pressure on the other will test the valve.

No leaks that I could find.

I've added UV dye to the system so any future leaks should be apparent.

Seems I have found my issue with the blower motor!

I seem to have an issue opposite to most, in my case the Fuse for the motor was not in, so naturally I dug out a 30amp fuse and popped it in...

Couldn't really be that easy?

Well I jumped in and turned the key to position 1 and BRRRRR the blower on the Pax side lit up full blast blasting luckily it stopped with the ignition key pulled!

So to me it sounds like either a stuck relay or a dead blower resistor?

It will most likely be the transistors on the motor controller (which is on the motor itself) that are dead short - it is fairly common. So the fuse was removed to stop it running full pelt all the time.

As for the AC - really that should have been pumped up a fair bit higher than 3.5bar to test. Aside from the top corner of the condenser being the usual failure, the suction line (big pipe) along the firewall where it is sat against the foam is another. As the pipe sweats in normal operation, the water is sucked up by the foam, which then rots out the back of the pipe causing tiny pin hole leaks in it where you can't see them.

If you've put dye in though, at least it will give you an idea of where to look - just keep an eye on it. And push the foam back away from the pipes on the firewall and see if any evidence of it appears there too.

I put a fair amount of dye in so hopefully any leaks should be apparent.

A new blower motor should fix the issue, I hope.

You don't need a blower motor, just the controller. Running flat out all the time means, as Sloth says, that the power transistors have gone short circuit. The controller is the same as used on various Peugeot/Citroen vehicles, see https://www.ebay.co.uk/itm/153186756109.

Yep I agree but the fan doesn't sound too good.

The odd thing is it came on on ignition position 1, the Hvac panel wasn't even on.

There is a 12V live to the blowers that comes on in position 1. I have used it as a 12V tap for a feed to a digital temp gauge.