rangerovers.pub
The only place for a coil spring is up Zebedee's arse
nigelbb
Member
offline
82 posts
What is the VIN range? in forum Opening time
Jun 21, 2022, 4:37:58 AM UTC

My VIN is SALLPAMJ31A458723 which doesn't seem to map on to the VINs listed. How do I decode it? Is it just the six numerals at the end that matter?

Am I dreaming or thinking of another car? I'm sure the indicators on my Vogue used to flash when I locked or unlocked with the fob but they don't now. Everything else is working well. It has a new latch in the driver's door. Am I imagining flashing indicators?

My long term project is to have the engine in my 2001 Vogue reconditioned/remanufactured. Given all the labour involved & the ease of access to components what other ancillaries should I consider replacing with new or reconditioned items? A few obvious candidates include starter motor, alternator, coils, spark plug leads etc What about oil pump, oil cooler? Anything to do with gearbox or differentials?

I have owned my P38A for eleven years & it's now done 172,500 miles. It had 80K miles when I bought it. It's basically sound if a bit scruffy but has been regularly serviced & is rust free. It cost me £5K & it looks like clean examples are worth at least that now so it's worth it to me to invest some money to keep it running for another twenty years.

I opened up the bonet today to check oil, coolant, etc & notice that the windscreen washer tubing on the drivers side (RHD) was dangling from the bonnet. Examination revealed that a right angle connection in the tubing should clip onto a plastic stud that secures the insulating blanket under the bonnet. I foolishly tried to lever out the plastic stud with a screwdriver causing top out & disappear somewhere in the engine compartment. I secured the tubing to the insulation with gaffer tape but the insulating blanket is hanging down when the bonnet is open because of the missing stud. This is all a longwinded way of saying does anyone know where I can get a replacement. I looked on Rimmer's website www.lrparts.net but can't find it.
https://ibb.co/LdTVrJm 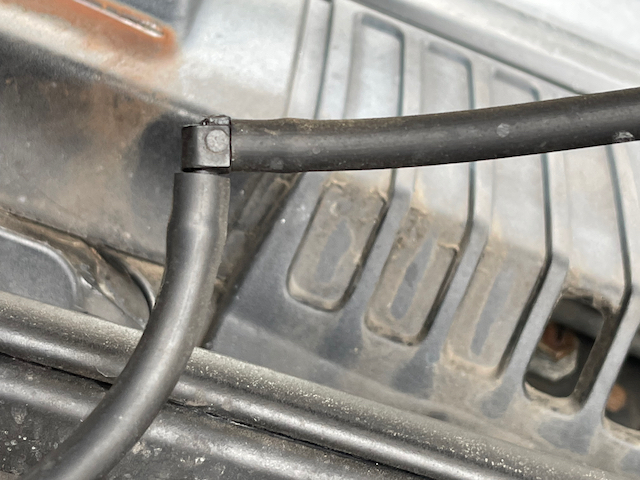 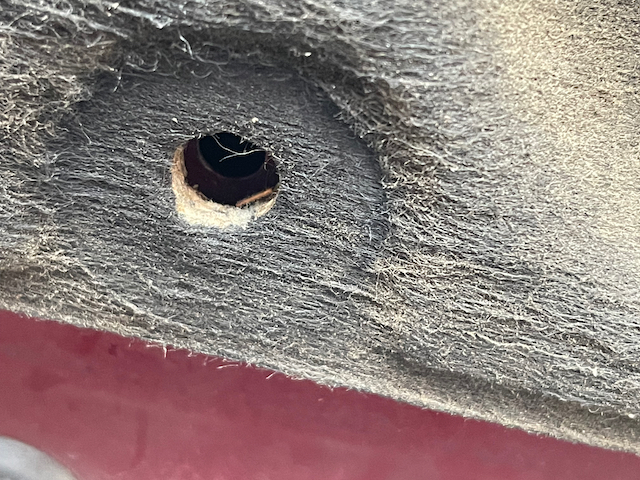 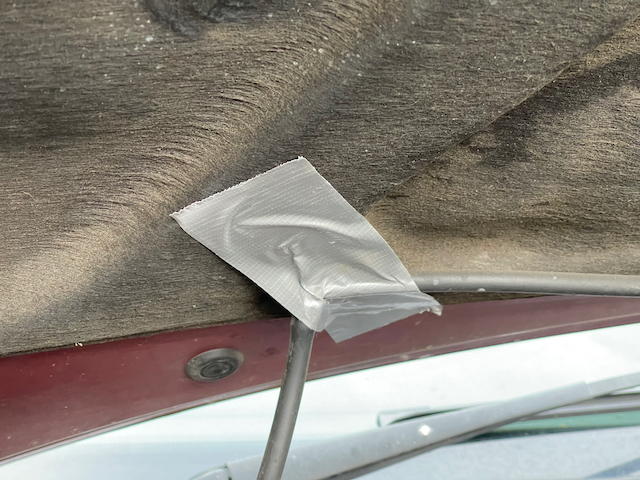 I wasn't sure which forum to post this but RAVE puts it under Electrical so who am I to argue?

I have a 2001 4.6L Vogue. Last Saturday my serpentine belt snapped. There was initially some noise under the bonnet like a branch being dragged along. Then a sort of 'Bang!' & the steering suddenly went really heavy. I guessed immediately that it was the serpentine belt so drove on for a short distance until I found somewhere safe to stop by which time the temperature warning light was on & steam escaping from the header tank cap. The belt was all shredded & it had taken chunks out of half of the fan blades plus another chunk out of the lower fan shroud so the upper fan shroud has nowhere to clip to on the right.

I've had the car brought back to the house & I should have a new belt delivered tomorrow but I just wanted to check a few things. RAVE describes removing the fan but I cannot see any reason for this. The fan isn't in the way at all & removing the fan isn't going to make putting the belt on any easier as far as I can see. I've identified the tensioner & putting a 15mm spanner on it can move it across plenty so it all looks straightforward to put the belt back on. Oddly RAVE doesn't show how the belt runs round the various pulleys. @Gilbertd sent me this image that matches my engine. 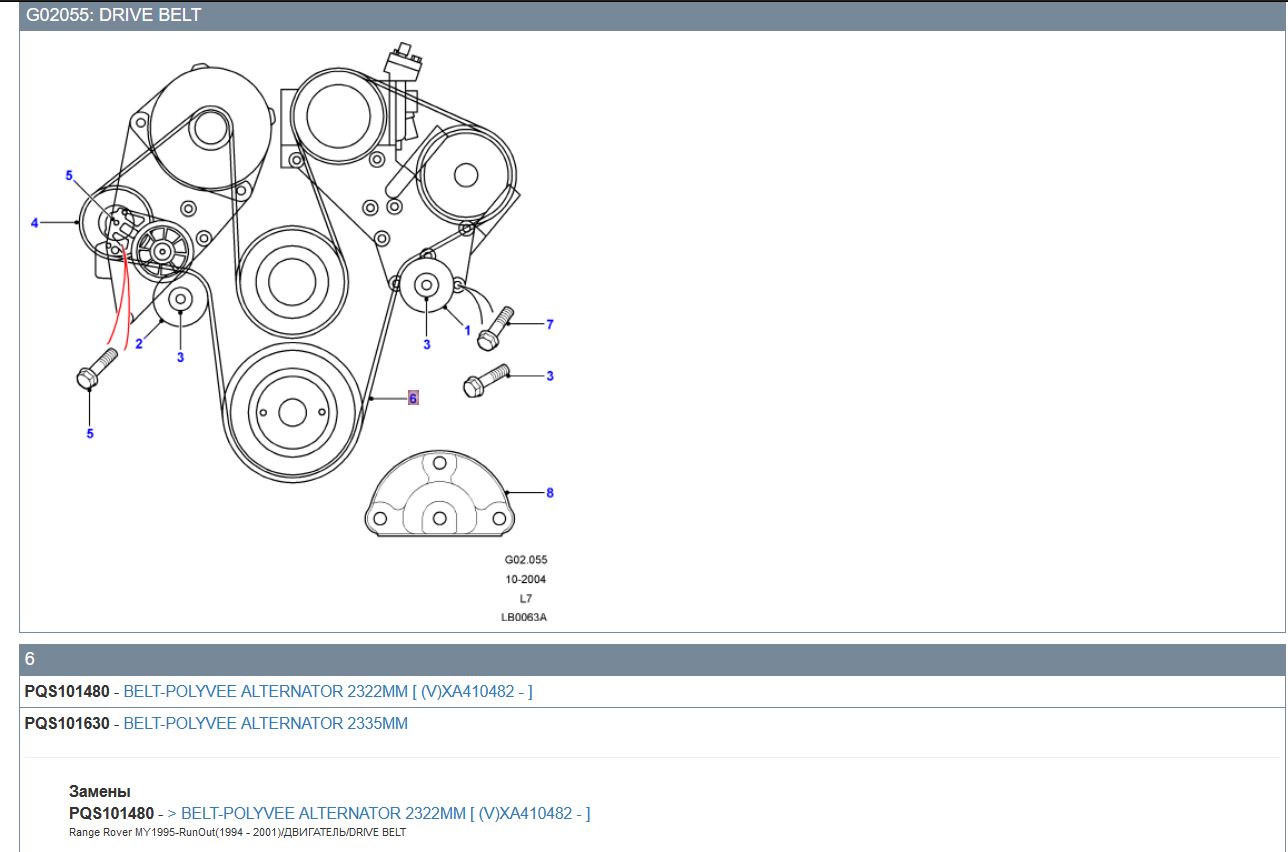 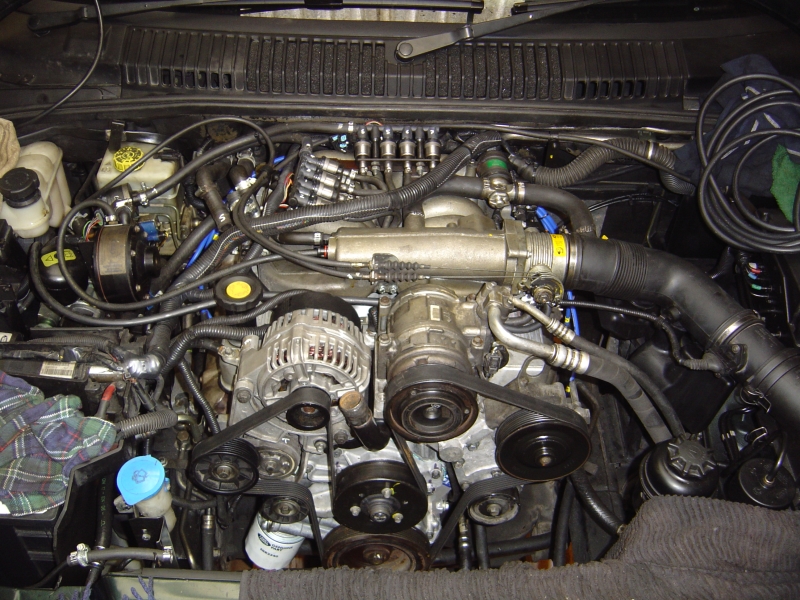 Are there any hints or tips anyone has? According to an Atlantic British service schedule that I downloaded the serpentine belt should be replaced every 60,000 miles. My P38 has done 166,660 which is about 86,000 more than it had done when I bought it 10 years ago & even though I've had it regularly serviced I don't ever recall mention of a new serpentine belt so I'm not sure when if ever it's been changed.

Will the damaged fan be a problem? I can repair the fan shroud with gaffer tape. It should be all right for cooling as it's just had a new radiator & the fan blades are mostly there but looking moth eaten. Will it be a problem if it's unbalanced? I cannot get a new fan for several days & it looks like a bit of a bugger to get it off unless you buy a special expensive pair of tools so if I don't need to replace the fan as a matter of urgency I would be pleased.

I have owned my 2001 P38 4.6L Vogue for ten years. I have suffered many of the usual P38 problems with EAS, remote receiver, crankshaft position sensor etc but nothing major until it started overheating last year. It's either the head gasket or the cylinder liners but was fixed with some liberal application of Steel Seal. This fixed the overheating problem with combustion gases entering the cooling system but put a load of sludge into the radiator & heater matrix which led to more overheating problems & a non-functioning heater.

I was very happy to meet @Gilbertd in person as he lives only 10 miles from where I work. He introduced me to this forum & has been doing some work on my car. The Nanocom fixed some minor irritating problems with the headlight warning & interior light not working. The new radiator has fixed the overheating but the leaking sludged up heater matrix proved more challenging so has been removed & bypassed for the moment so I don't have a heater at present but in summer this isn't a problem. Replacing the heater matrix requires complete removal of the dashboard & is a 2-3 day job that will have to wait until next month. The AC has been recharged so I can be icey cool when it's hot outside.

I acquired the car as part of a divorce settlement ten years ago. My initial plan had been to sell it it but after I drove it for a week or two I fell in love with it. It's still the nicest car I have ever driven. I love the driving position, the visibility, the manoeuvrability, the performance etc The fuel consumption of 18mpg is the price I have to pay for driving around in a £50,000 car. It's not my daily driver but I do use it regularly. We have had countless journeys to & from our cottage in Brittany heavily loaded in both directions. We are now resident in France & spend over half our time there so the P38 has been re-registered on French plates. There was a one off cost of registration of €500 but there is now no equivalent of road tax in France so I save over £300 each year. The equivalent of the MOT (Côntrole Technique) is every two years. I considered an LPG conversion but first I am going to experiment with E85 (85% ethanol 15% petrol) which is available in France at half the price of petrol.