Lovely pair you have there ;)

Apologies for the delayed response. A promotion in work has seen me with a lot less time to get on with things then I'm used to!

The new engine is ready to collect from V8 Developments. We went for a Torquemax camshaft, bigger valves and gas flowed heads. I can't wait to get it... Unfortunately we've got visitors up this weekend so it's having to wait an extra week.

My other VSE has had a load of work too... a new exhaust which was a right hassle as the Britpart one I got from Island 4x4 wasn't even close to fitting. I've replaced all of the bushes, radius arms, pan hard rods, etc. with genuine LR bushes, I've done the steering damper, the leaking air con pipe, and rear axle oil seals. Then when I thought I was nearly finished I noticed a sweat on one of the gearbox oil cooler pipes. So I had to order an oil cooler, both pipes, genuine gearbox filter, etc. to get it finished.

I've just about finished putting it all back together and then it's ready for it's MOT too. I want this one finished so I can use it to go and fetch the engine for the other car. Nothing is ever simple though!

Anybody want to hazard a guess as to how many 4.6 engines will fit in the back of a P38? I've got 3 to get to Spalding and would rather not use the trailer! Wishful thinking on my part I suspect.

Complete engines or short? I had one short engine in the boot of a P38 and it looked lost. With the seats folded 3 should go in no problem, even complete engines. Your biggest challenge is going to be getting them in. I thought it would be easy with my engine crane but the arm isn't long enough once the lower tailgate is down so once in place it had to be manhandled in.

They're blocks with heads on them. No inlets or ancillaries thankfully.

Your biggest problem is securing them so they don’t roll about, 3 engines without mounting brackets will go in easy, as Richard said, it’s a bit of man handling to get them in.

I'm a bit depressed - seeing the cars you guys play with as 'breakers' makes me feel mine is 'broken' .......it was great when newish but dogs and Spanish roads and heat have taken their toll. And while I'm on, tell me, I think my P38 gems had those sort of figure of eight plastic keepers to guide/separate the HT leads and perhaps I left them off when the newer fatter leads didn't fit - or was it the Classic ? Going senile here, but perhaps the leads are shorting as they are touching metal parts when hot and engine still misfiring - what do you think ? Not strictly on topic I know.

GEMS should have clips screwed to the rocker covers. One of mine still has them, on the other the HT leads are held away from the metal with tie wraps.

if getting 3 engines into one car is still an issue.

An effective trick to ease manhandling with hefty loads is to put them on a board and slide it along round rods laid railway fashion. Once in place there should be enough room to lever the board & load up to pull the rods out. Strapping the engine down to the board will give it a decent size footprint to spread the load and, if neatly wedged in, will stop it wandering around the car. The waterproof breed of chipboard underfloor works well for this sort of job. Ex-kitchen cabinet sides aren't too shabby either. Whatever you have. Remembering, as I never do, that its disposable once the job is done. Need to think a bit about something to spread the load when levering up to pull the rods.

Not yet used that technique in a P38 but rail fashion rods work a treat for machinery moving. Most of a ton of Bridgeport, and ton plus of P&W or Smart & Brown lathes slide around nicely single handed on 12 mm steel rods. Beats the pants off pipe rollers! 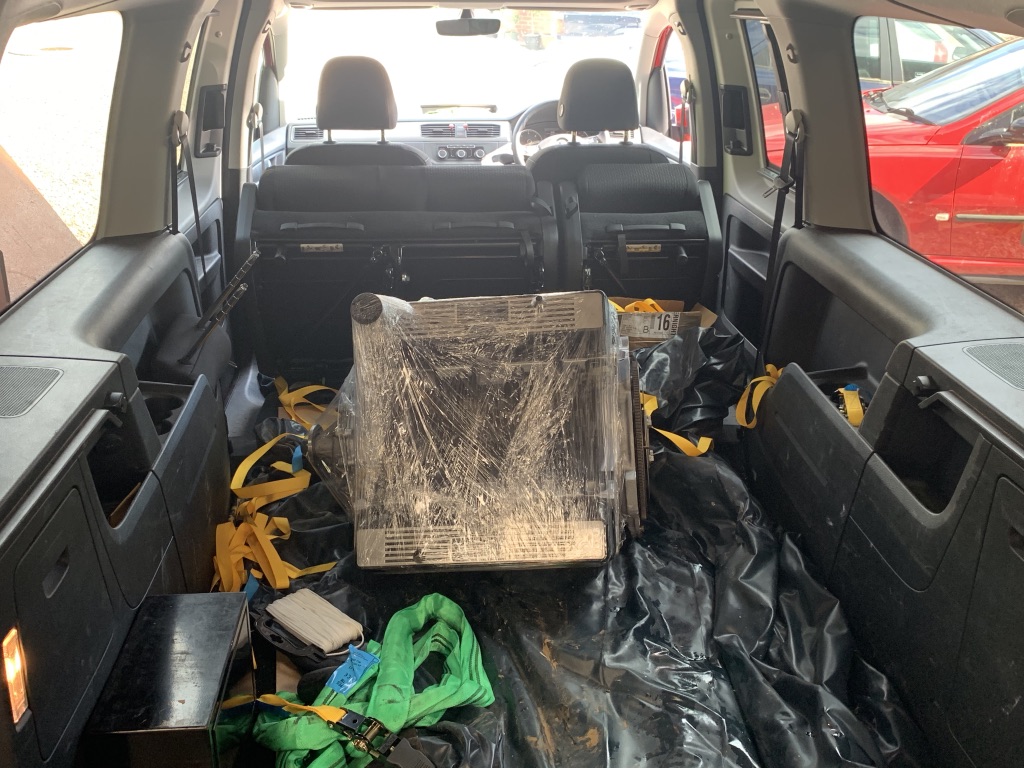 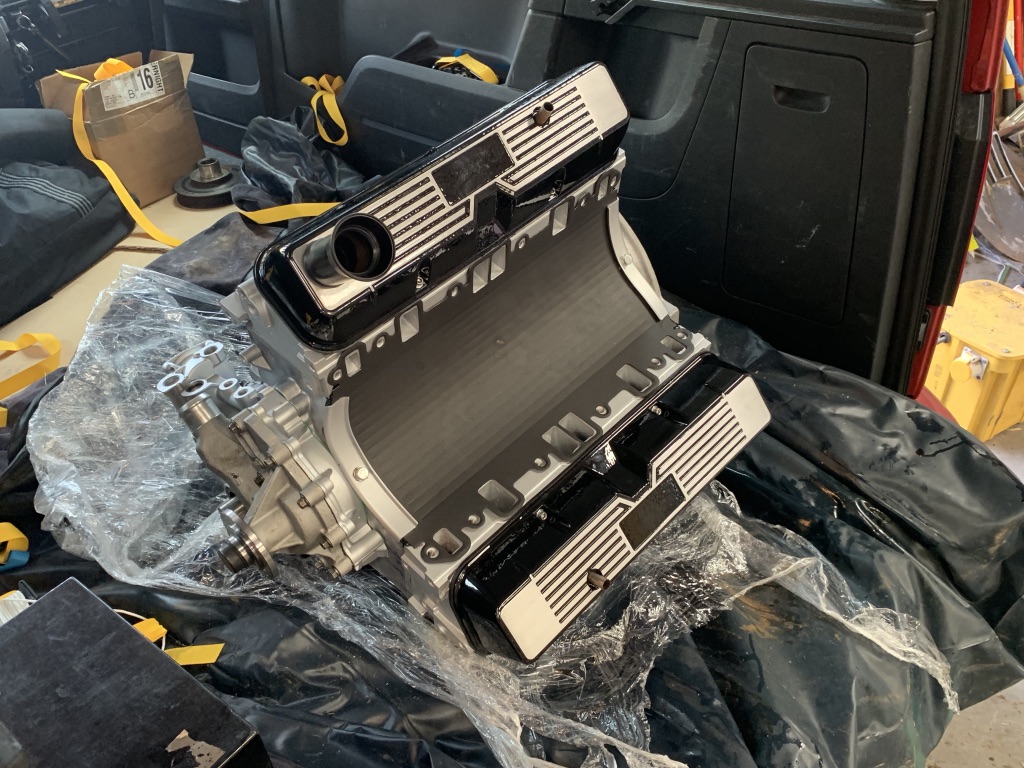 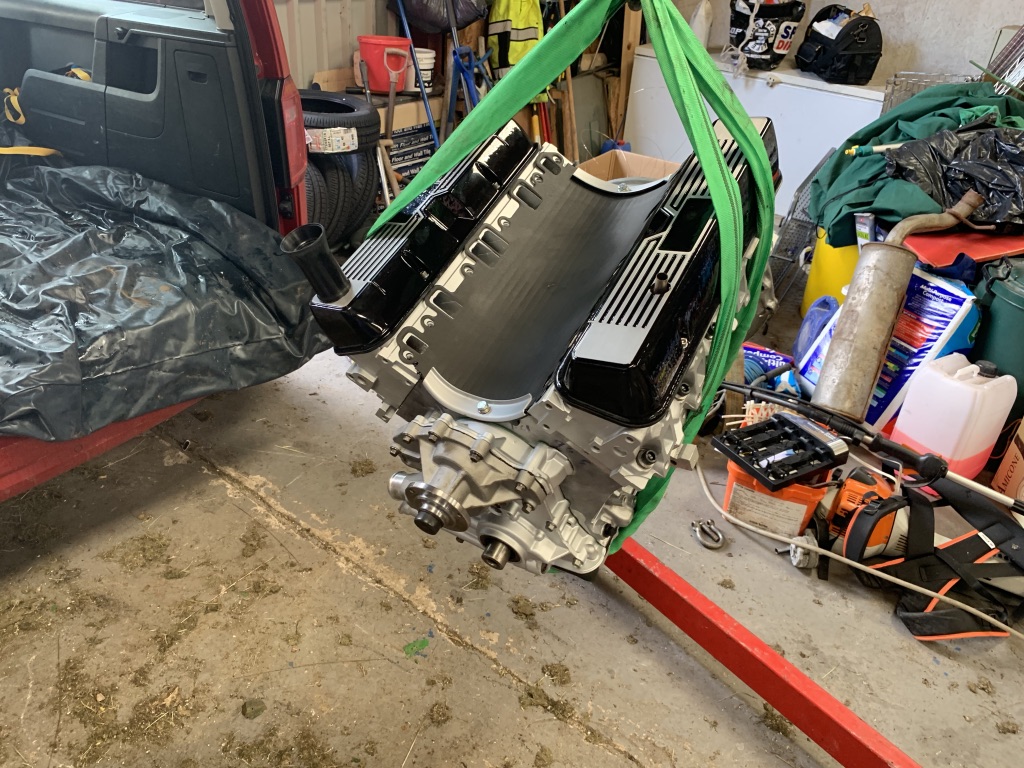 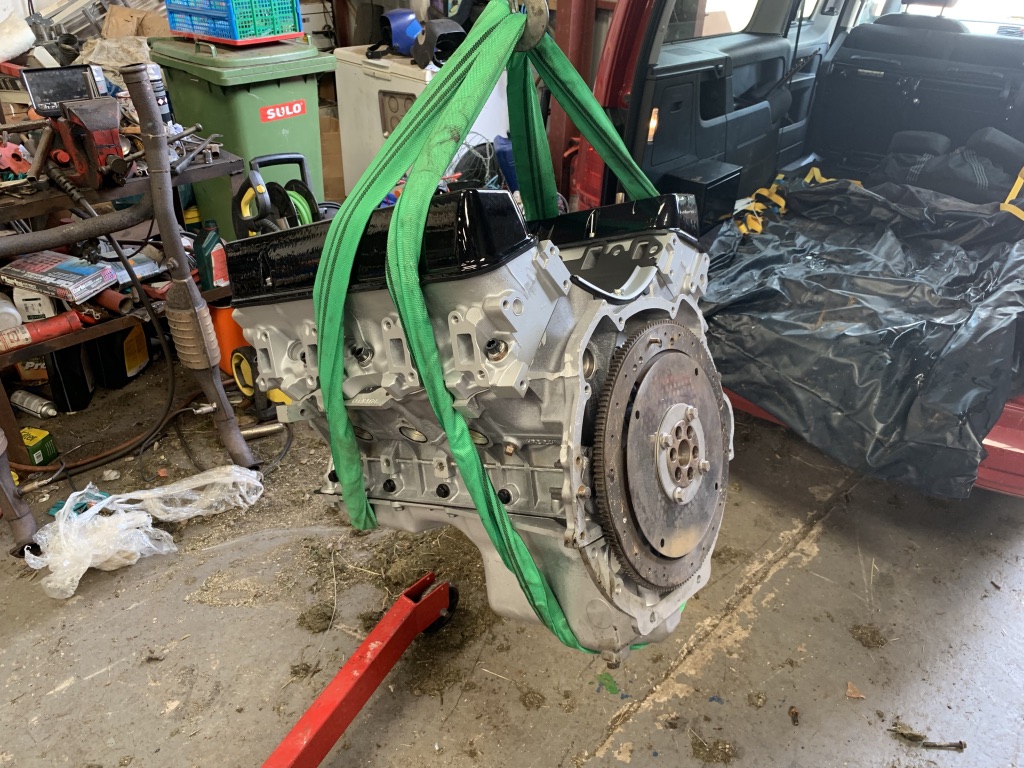 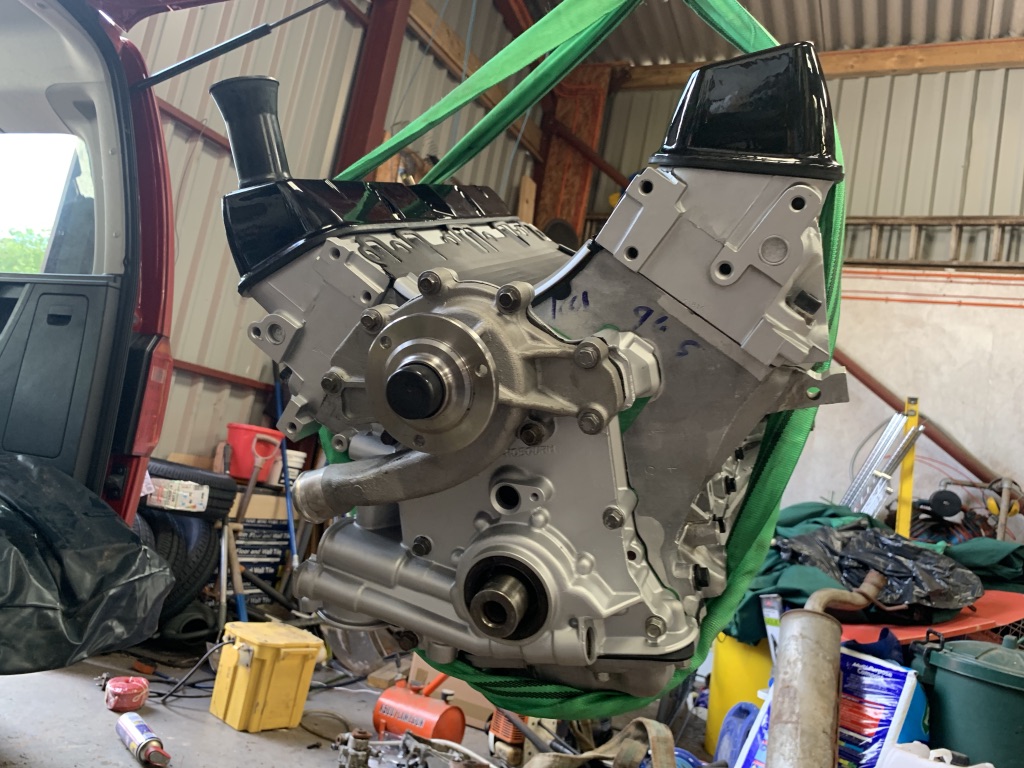 Rob at V8 Developments has sorted this engine out for us. Initially I was going to build it myself but when they advised they don't charge for assembly if you're buying everything from them it became a no brainer to let them build it. As much as anything for the warranty.

Anyway, we had a trip down last night, stopped over in Spalding and collected it this morning before heading back to Glasgow.

It's a 4.6 Top Hat Linered Block, fitted with a torque max camshaft, the cylinder heads have been fitted with larger valves and have been gas flowed as well.

Rob has also balanced the flywheel and crankshaft pulley to the new camshaft and reckons it should now be smoother then it was the day it was new!

I need to get the other VSE back together and off the ramp now so I can start sorting this one out.

I'm going to replace a load of stuff that's easier to do whilst the engine is out of the car, and I'm going to try and clean everything as well as I can whilst it's in bits.

The block is lovely and shiny. Rob mentioned earlier that they acid bath the blocks to remove all the muck from them before they do anything with them. I'm tempted to try and find someone locally who can acid bath both halves of the inlet manifold to give it a nice shine and remove all of the crud from them as well.

I reckon it's going to take a lot of effort and time to get it all rebuilt as I'd like to try cleaning everything as we go. No point in doing half a job :)

Do you have someone who powder coats nearby? They will do your inlet manifolds! They have baths and powder coaters will coat anything and everything. Take the rocker cover in and they will match the colour. Won't be expensive either.

You deliberately bought a another P38??? With what I have in the past and am experiencing now with my P38, I will not be buying another one.

They are additive once you get to use them and appreciate their little foibles. I've recently sold one of mine so I'm down to just two. But it at least gives me space for another..... I honestly can't see myself ever not owning a P38.

Also you if you have space you can keep one running and one spare :)
Or do it like the Navy: One Working, one ready, one in refit...

...only half joking btw

The breaker I’m nearly finished with so it’ll be leaving soon, the DSE needs to go... anyone fancy a just about finished project?

What colour interior is it. I need some of the cream 1997 interior plastic bits that breakers throw away!

can't wait to see her back together.

Well, seeing as the other thread was about the engine tear down which is finished I’ll use this one to document all the little bits an pieces that we do to the car.

Just before Christmas the VSE that had the new engine (BT02) had a replacement heater matrix as it was leaking badly so that’s one big job ticked off the list.

Today, I’ve just collected it’s wheel from being refurbished and have this evening fitted a set of Michelin Cross Climates to the wheels. They’ve done a superb job of the refurb. To say I’m pleased with the results would be an understatement.

Just need to bolt them to the car and have a complete piccy ;)