rangerovers.pub
The only place for a coil spring is up Zebedee's arse.
Chirping or squeaking under load.. not the usual suspects

I have a new noise that has developed... and I am slightly stumped currently. Noise starts occurring towards the end of the clip and it sounds exactly like that in person. Audible inside the car clearly.

It only happens under load - in the video it is in drive with handbrake on and another foot hard on the brake. So it isn't UJs, or anything post autobox output.

It starts about mid throttle and between 2-3k. It might persist higher in the rev range but I've been driving sensibly to avoid having two cars off the road. It is there approx 50% of the time too. Lift off and it stops immediately.

It is NOT the belt or any ancillary - it persists with the belt off. I wish it was.

It appeared to be worse on gas than petrol, but I think that is placebo as it happens on either fuel.

It appears to be on the RH/drivers side, but as with a lot of noises it sounds like it could be underneath, to that side, or on top. But, its definitely further away than the LH/passenger side.

In neutral/park however - gone. Revs up and down sounding lovely.

The most annoying thing about this particular irksome noise, is I am sure I had exactly the same thing with the first engine on my first P38... and I never got to the bottom of it. I'm pretty sure that was 'solved' when it had a replacement engine dropped in. It also had a set of headers already on it. I can't see any evidence of a leak from the little you can see with heat shields in place.

Anybody come across this before?

sorry to be the bearer of bad news, but that cd be early-stage head gasket failure. If you put a hose pipe to your ear, and probe the area you may be able to locate the sound better. I had one go like that (3, outer), and it ended up like a steam engine. The next time it happened (4, outer) I got it early and removed the HG before it went critical. If you remove the lead from the suspect cylinder the squeak will likely disappear

My exhaust gasket on the Defender V8 sounded more blowy, when that needed doing, but was easily spotted by the hose-pipe, and wasn't load-dependent.

Just to add - in the video throughout there is another sort of whine/noise - its the water pump bearing. I know they're noisy, they have been for a while, spare is waiting to go on. The noise in question is the much louder and higher pitched almost mouse like squeaking at the end. I didn't want to hold the revs up for longer because I enjoy not having my feet run over or burning the already hot ATF.

To be fair - even if its the HG, I won't be surprised or disappointed. The engine is on borrowed time, having had #6 liner crack and be fixed by water glassing it well over a year ago now. I changed the plugs last night and they all looked even - but an internal to the valley or external blow wouldn't have an effect on those anyway unless it wasn't firing on that pot.

It is more frustrating not knowing what the problem is definitively - as much as I don't want it to let go spectacularly, it would answer the question.

I don't know what option I'd take it if it is. It hasn't been overheated, so no warpage to deal with, and the threads shouldn't pull out... so maybe an in-situ gasket swap wouldn't be too much hassle to get a more life out of it yet. The diesel swap is just not on the cards with the available fundage at the moment.

That being an alternator bearing shitting itself!!

Pull the aux belt off and have a listen.

In my first post, I've already tried. It's not the belt or anything else that spins externally... unfortunately.

It also comes and goes. Not sure what to do next.

Could be the start of this https://rangerovers.pub/topic/1147-at-just-the-wrong-time-of-the-year

It does sound like a belt or ancillary bearing though, that was my first thought/hope/wish/misplaced optimism.

If it is the start of a blow, I'd quite like it to hurry the hell up and make its mind up. I will pull it to bits if it comes to it, see if it can be coaxed on for a bit longer.

If it was blowing properly it probably would, but this only squeaks under load currently. I could try pulling a plug lead though on each pot on the side I think it's happening on.

That would narrow it down. Or it rules it out and it keeps doing it :P

If it is the start of a blow, it is most likely to be one of the centre pots rather than one at each end. I pulled the head on that one, had it skimmed as a matter of course but it only needed 6 thou taking off so I could have got away with just whacking a new gasket on it. All with the engine in situ.

The examples I've seen of external/internal valley blows do suggest the middle pots are most likely. Probably #6, as that seems to be having a hard life.

It would give me another crack and sorting the persistent oil leak down the back of the engine I suppose as a bonus.

it sounds like a inlet manifold leak , get a spray bottle and spray around the valley cover area and any other area under vacuum, it will squeal even more if you find it, it could also be something like a restricted pcv valve or split hose. as for the bearings in the alternator just use a screw driver to the ear and prod around anything that you think can make a noise. as others have stated it could also be head gasket , if you have trouble getting up under the manifolds tape a piece of wire to the tube so you dont burn your self

To me it sounds just like something is rubbing on something.
That would explain why only under load as things are shifting around at that time due to the torque.
Possibly even a loose fastener which is allowing the two joined parts to rub just that bit.
Try the hose pipe stethoscope for sure, but include mounts and both ends of anything that moves with the engine and attaches to the frame.
As it is a low intensity high frequency sound, it would be a small part vibrating and rubbing.
It could even be in the bay but not on the engine itself, just an sympathetic harmonic vibration.

Are we talking the chirping noise that starts at 7.5 seconds?

Yes - not the lower pitch noise that is present earlier (that's the water pump, its on the list).

I haven't had a chance to crack out the stethoscope yet - probably going to be next weekend before I get a chance at this rate. Busy week ahead.

Fixed the BMW starter on Saturday, so apart from this evening where its needed to pick up a freezer, the RR can sit and feel sorry for itself for a bit.

No progress made yet, but an interesting observation. The noise is definitely worse on LPG. On petrol its much quieter and less frequent, but definitely there.

I ran out of gas last week and have been using it on the jungle juice since on the odd days I need it. Reset the adaptives when I parked it up last to see if anything strays from ideal after a few weeks on petrol.

Bit of an update. Haven't been on LPG for quite some time now but the noise has persisted and it has gotten to the point of getting on my nerves. Started tearing into it to diagnose further.

First off came the exhaust header on bank 1, with the hope it was a visible crack in the header, or a gasket blow. Neither appear to be the case. There was a small mark on the inside of the heat shield that might have been causing it as it heated up and rubbed against the header pipe - but that seems too easy.

Next off came the upper inlet and rocker cover on the same side to inspect the rocker gear etc. Nothing unsual there, so off came the lower inlet and valley gasket. As the whole side of the engine and rear have been soaked in oil - it was all justified to reseal everything at the very least.

While staring into the abyss I'd gotten myself into, I couldn't help but notice the cam wasn't exactly as pointy as it could be... 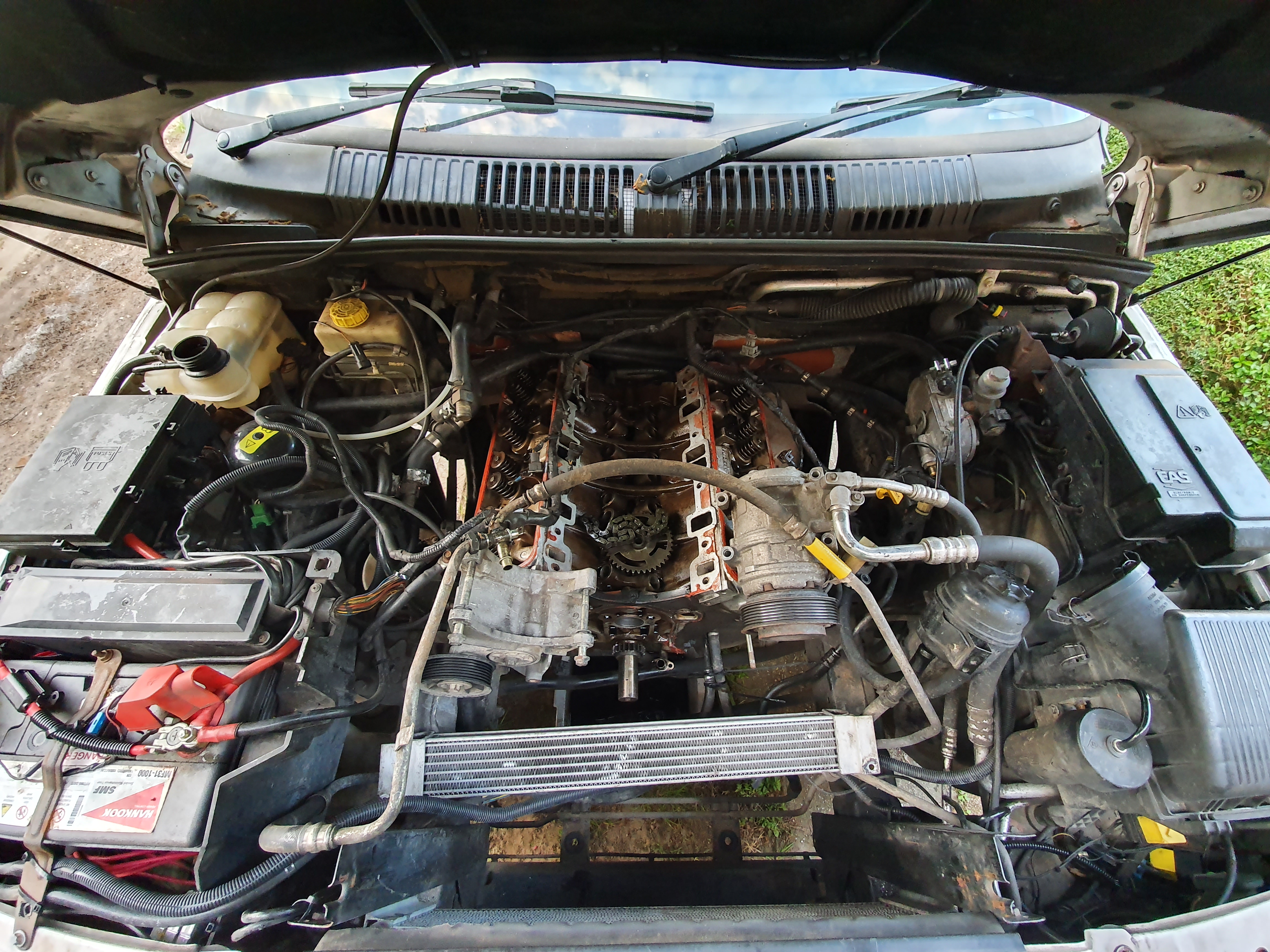 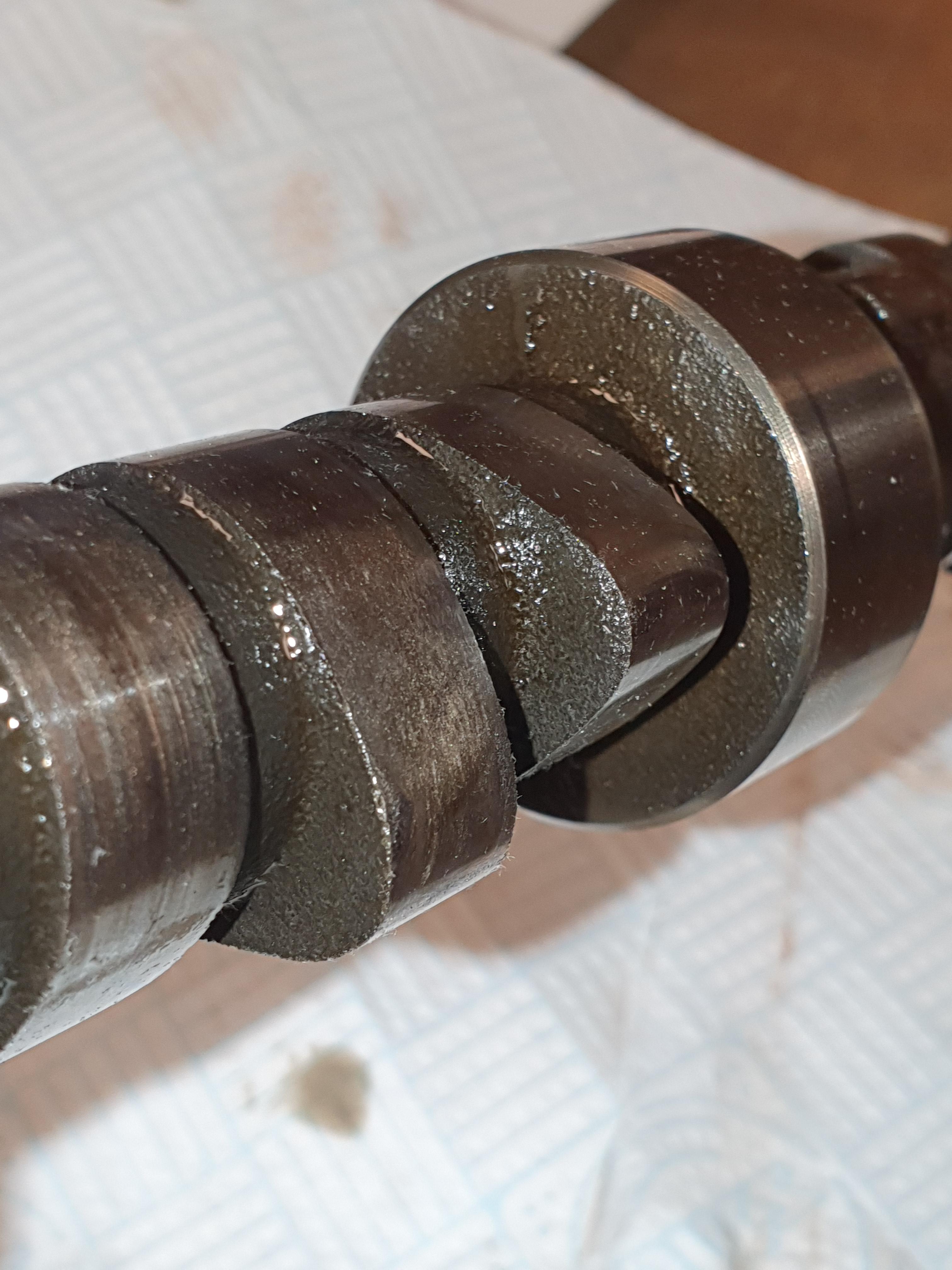 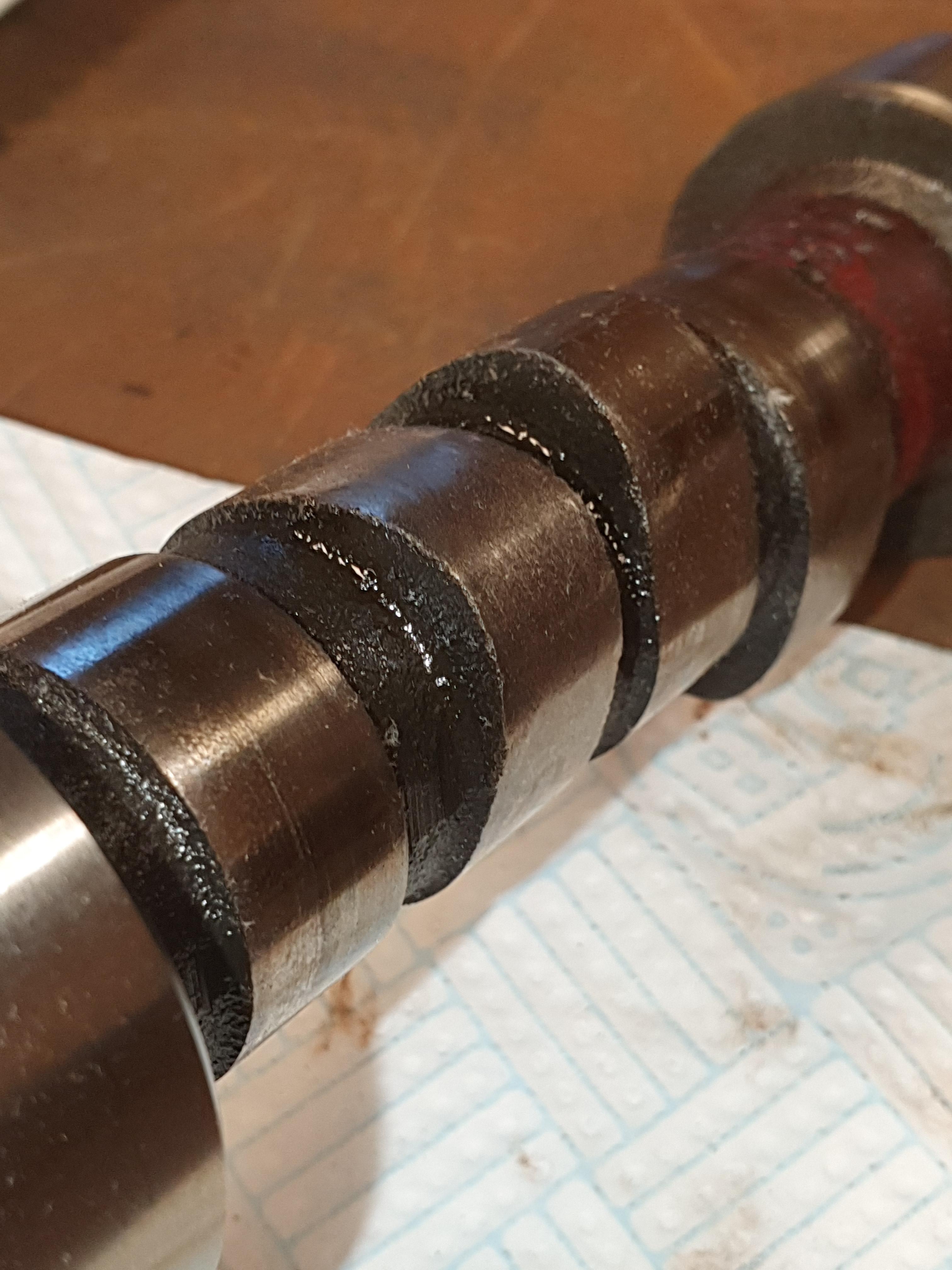 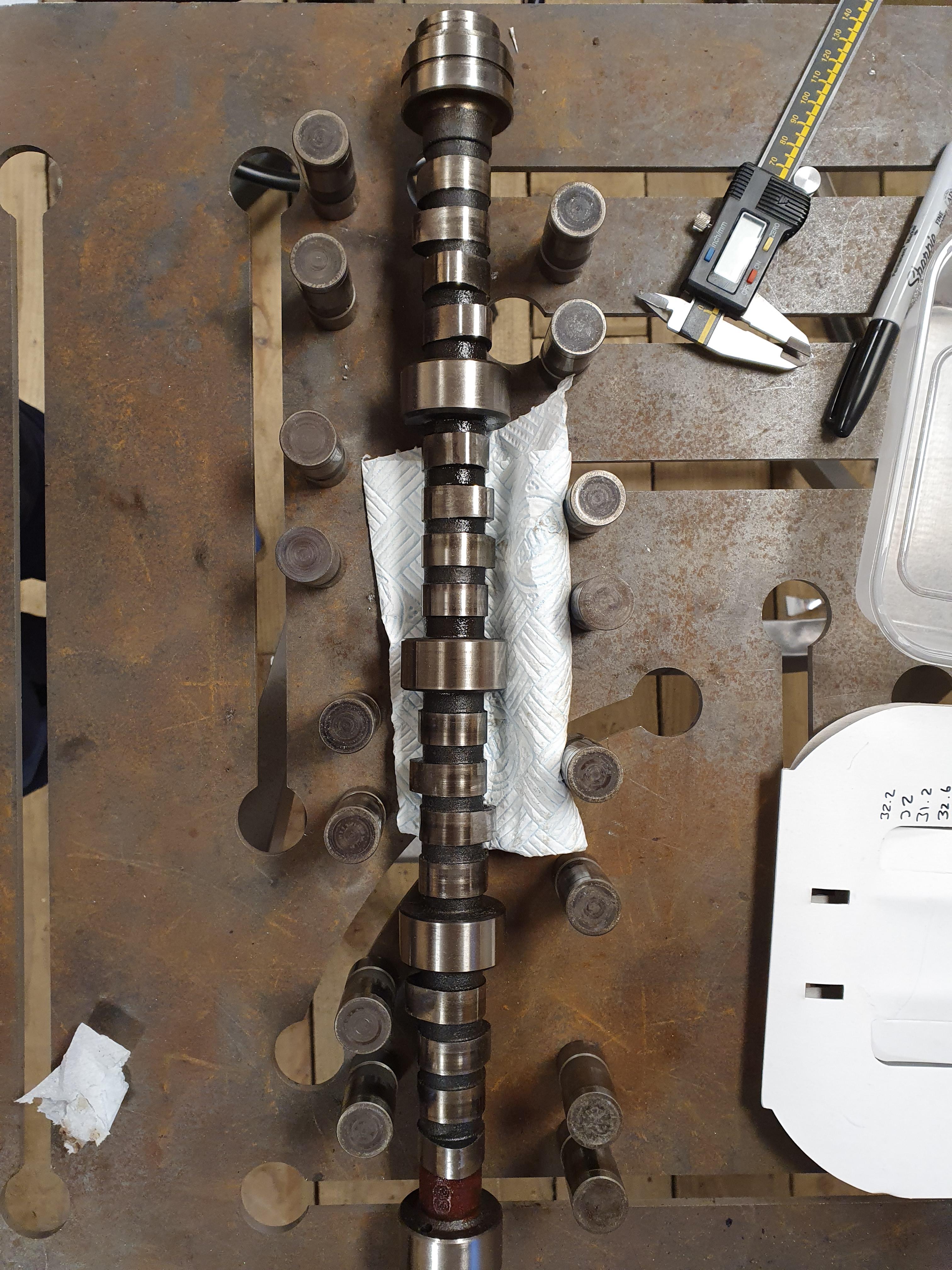 Second up from bottom right in the picture is actually #8 errr inlet? I think. It has been hammered - and the top of the lifter was dry when the valley gasket first came off, so I don't know if it has a blockage inside or what - but its definitely buggered.

Obviously all this lot is going in the bin. Should explain the engine feeling a lot less interested in getting things moving these days.

Next up is the ever-interesting compression figures. Once the starter motor had been stripped and cleaned of oil (was causing an arc in the solenoid that made an audible pop and burning smell most times you started), it went back on before taking all the valve gear to bits to test.

Bearing in mind cold engine with 'wide open throttle' (aka: whole inlet missing), all plugs out bar the tester, I got 170-180psi on all cylinders except #4 and #8, which were 210-220. This is the same kind of figures I had a couple of years ago on a cold test, so nothing appears to have changed here, but I'm still perplexed by those two weird cylinders. I've tested my gauge on a nitrogen pressure testing rig and it agrees with that - so I don't think the gauge is over-reading etc.

Inspecting the top of the pistons with a camera, #8 is pretty much clean, #4 has some build up - but if it was build up on the piston surface, #8 is clean yet reads high. So... I have no idea. As I say - it has been like this for ages, and doesn't seem to have affected anything that I know of.

About to order parts to replace the cam and lifters, a variety of gaskets, timing chain and sprockets, fluids etc. While I'm at it, the crappy stainless exhaust is all going in the bin too. Back to standard rear silencers, a set of cats up front, and a straight pipe in place of the middle silencer as I used to have. Can't have it too quiet :)

All in all... hopefully the noise doesn't rear its head again. I am going to borrow a crack checking dye kit to look over the exhaust manifold and see if anything crops up there. It isn't the hardest thing to change if it does still make noise down the line.

Lastly - the LPG is going for now. The injector pipes were all loose and the original petrol wiring loom has become crispy and is in need of repair before the inlet goes back together. I haven't used LPG in months, and the nozzle bungs will all just screw back in as and when I re-fit it.

That cam is probably one of the worst ones i've seen..

Mine was quite a bit less pointy than it should be when i did the valley gasket, should of pulled it out!!

standard lift cam going in i take it?

Well, that escalated!
It sounds like you'll have a really good engine when you're done :)