rangerovers.pub
The only place for a coil spring is up Zebedee's arse
LPG.

Seems LPG is being pulled.

Not a surprise at all. MFG run the most expensive filling stations in the country so it isn't going to be viable if everyone avoids using them unless they have no choice.

Trouble is, what are they going to do with the ones they offer on Morrisons sites that they also own?

As said, charging 30p more a litre for the same product would make it not commercially viable, but if you think thats a good business model, you'd believe anything.

I can't see the attraction of charging a car at a petrol station - maybe if you were stuck, but its hardly the kind of place you want to spend more than half an hour at the very most at. Particually most of MFG's forecourts if they are anything like the one nearest to me (which I've used around 4 times this year, whereas the Shell across town gets most of my visits through the week).

Thing is, if you're charging at a garage you'll be spending enough time there to probably want to buy something. You can't exactly splash and dash. Of course, most of the time you'll be charging at home so I suspect the number of forecourts will shrink rapidly and leave the ones on motorways and other trunk roads.

I think the Germans have realised that people don't tend to want to recharge at services unless they really have to. One thing I noticed a couple of weeks ago when I drove to Sweden and back is that virtually every filling station in Germany has LPG, quite a high number also have CNG, a couple have H2 and some even have EV charging points! Best one I saw was in the Netherlands, LPG, CNG, H2 and EV charging, no petrol or diesel at all. Just goes to show how much better other European countries are. According to mylpg.eu, UK has just over 550 LPG filling stations, compared with almost 7000 in Germany. Even a tiny country like the Netherlands has 1130, around twice the number we have, and they are currently putting more in.

When BP, Shell, MFG pull LPG pumps and tanks from their sites what happens to that equipment? Might expect some to appear on Ebay etc but haven't seen any for sale.

Would be nice to have the option of buying some to set up adhoc LPG stations in areas where there'd be demand.

A fella on another forum asked other forum members (all in the NorthEast) if they'd like to club together to set up an LPG site for their own private use so they could all enjoy LPG at cost price. I suggested they'd do better making the site for public use, maybe buy for a lower price if buying in greater quantities, charge a markup price even for investors, run it like a business so investors share the profits... If you have the chance to save £10 on a tank of LPG by not paying a markup, or pay full price at the pump but the pump puts £20 back in your pocket, you're better off doing the latter. The latter also has the advantage of potentially expanding to 2 sites putting £40 back in your pocket.

It didn't happen though, no-one showed interest. That said he was thinking of a site in an area already not too badly served by LPG stations and asked the wrong people whom he showed figures quoted by Calor for setting up new equipment. Stark contrast to the pop-up adhoc LPG stations I've seen in the past in areas like Rotherham, where a few fellas would rent an old bit of land, install second hand equipment and buy-in gas from the supplier that charged the lowest price.

Reminded me about Sweden, my son and his American wife are flying to Sweden on Sunday, must remember to feed their cats while they're away lol.

Birmingham autogas had a few of the Autogas branded tanks in their yard back when they started removing those, They will also do the tank etc as a ready to hook up skid unit. I think the price they were talking about was around the £6k figure for a unit ready to go when I asked out of curiosity. (plus the gas to fill it obviously).

You'd need to have something for it to sit on, and a suitable electricity supply. But I think you are likely to find that Calor or Flogas would want the same in any case.

You'd also want some way of either charging for the gas on a card etc if your not planning on it being an attended setup.

That said, most of MFG's pumps look like they are well past their best anyway

Charging at a petrol station is definitely a bit crap, but on the flip side, its better than not charging and ending up on an AA lorry. I think in the ~5 years i've driven EV's i've charged at a petrol station two or three times, but in all cases it was critical because there was nothing else nearby. One time i rolled in with the battery showing literally 0%, having had a failed charge at another unit 10 miles down the road.

It feels like a stop-gap, however all of the big petrol providers seem to be looking at it, i guess they dont want to be left behind and want to get a foot in the door. It will certainly help EV adoption if you know that any of the many filling stations around also have charging. MFG has setup a few EV only sites, but they've also rolled out a lot of "hubs" with 6/8/12 chargers at existing petrol sites, which as an EV driver is far more useful than the usual effort of one or two units.

Charging is slow enough, without turning up and finding a queue for the one charger (or worse, its broken). So multiple unit sites are a huge draw for an EV owner.

Its very likely a huge profit source for their shop too, as if your sat there for 15-30mins charging the chances are your going to pop in for a coffee or a drink or whatever. Generally on a longer trip i will try to align the charging stop with natural breaks like lunch, so there will be some capturing of that market too.

Motorway services ofcourse are a different story, but the provision at most motorway services in the UK is utter garbage, so a lot of these charging hubs at normal petrol stations are popping up near motorways, to catch the folks who need to charge and want to avoid the motorway hubs as they're generally under-specified (often only 2 or 3 chargers) and massively busy.

As for the LPG side, its certainly a concern, availability has dropped significantly over the last few years. However i suspect its just never been that popular here in the UK unlike Europe, and with the move towards direct injection, it stopped being viable for new vehicles probably 10 years ago. Thus we're basically in a run-out period where its only used by older cars which are as time passes simply disappearing from the roads. Add in the EV side going the other way, and with limited space, as a business you can see its a very clear choice... Keep the large bulky LPG tanks for the 3 campervans and 4 V8 SUV's a day, with all the associated costs of maintenance and upkeep, to sell fuel with wafer thin margins... Or remove them, install some EV chargers where your making not only a bigger margin on the fuel itself, but you've got a nice captive audience for your shop.

The only places round here that still have it are Asda and Morrisons. My commute is 40miles from Glenrothes to Loanhead, and i pass one station in Kirkcaldy (Asda) which has LPG. Even Edinburgh, big city has only 2 locations with LPG and they're both on the east side of the city miles away from where i travel and are both charging £1 a litre. 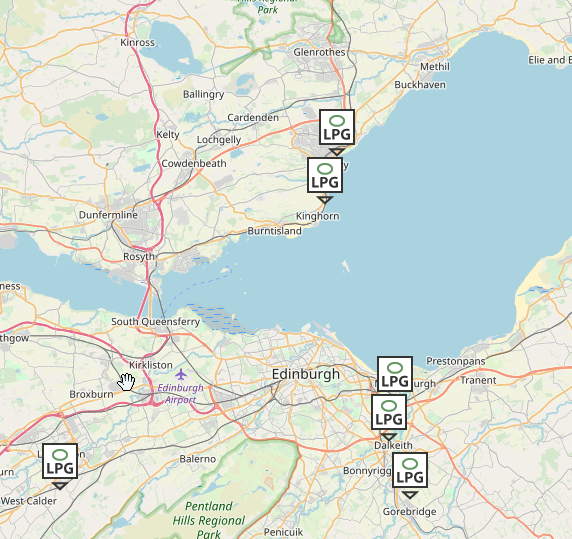 At least the nearest asda is 73p. Thing is for me the P38 is a third car, used occasionally, and even then its quite a concern. For those using it daily, bad times!

do you lads and lasses use the flash lube kits if so how would I know if my system has it fitted and where would I be best to look for it?

P38 doesn't need it, the valves and seats are hard enough to not suffer. Now you've got a Supercharged Sport, the Jag engine you have definitely does need it. Somewhere under the bonnet you should have a reservoir for the fluid.

P38 doesn't need it, the valves and seats are hard enough to not suffer. Now you've got a Supercharged Sport, the Jag engine you have definitely does need it. Somewhere under the bonnet you should have a reservoir for the fluid.

Sadly, I fear the end of LPG will signal the end of my days running a V8. I'm not complaining as I know deep down that burning outrageous amounts of fossil fuels has to end but.. it's a shame that LPG didn't really make it past all the vested interests in the UK. It's a clean fuel, and basically a byproduct of the rest of the oil and gas industry. Sadly, the only acceptable solutions to pollution involve selling new cars and not retrofitting old ones.

It's certainly getting that way in some areas of the country I'll admit. I'm lucky with a Flogas depot and 4 filling stations within 8 miles of me. You could always get a pump and fill up from 47kg bottles.it used to work out more expensive than a filing station but doesn't these days.

No problem at all on the Continent where more stations are appearing all the time. I even suggested moving to Belgium, cheap and plentiful LPG stations, good quality chocolate and decent beer, what more can a bloke ask for?

I'm just a little miffed that my newbuild came with a gas boiler and trad phonelines instead of fibre. At least it's well insulated!

I was under the impression that it was all new builds from sometime this year had to have an EV charge point, no idea if it has been pushed back or not. I like new builds with good insulation, I'm installing AC systems in peoples new build houses as it gets too hot in the bedrooms as soon as the sun comes out.....