Following on from this... I went into the workshop and started assessing bits and pieces to work out what I should be replacing whilst swapping the engine in the Range Rover... A closer look at the head gasket and cylinder head became interesting...

Good Cylinder: (Note the bevelled edge around the rim of the cylinder). 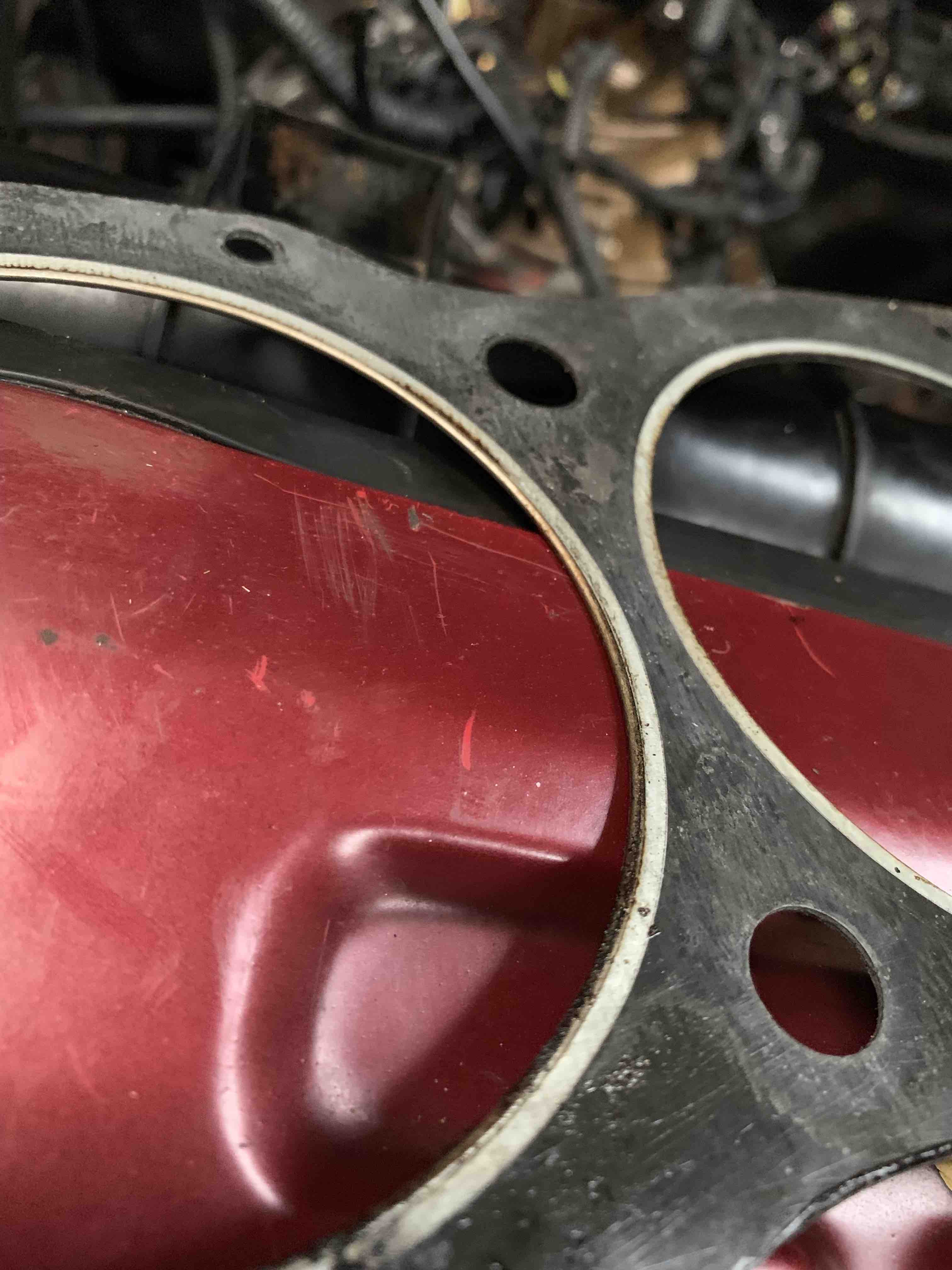 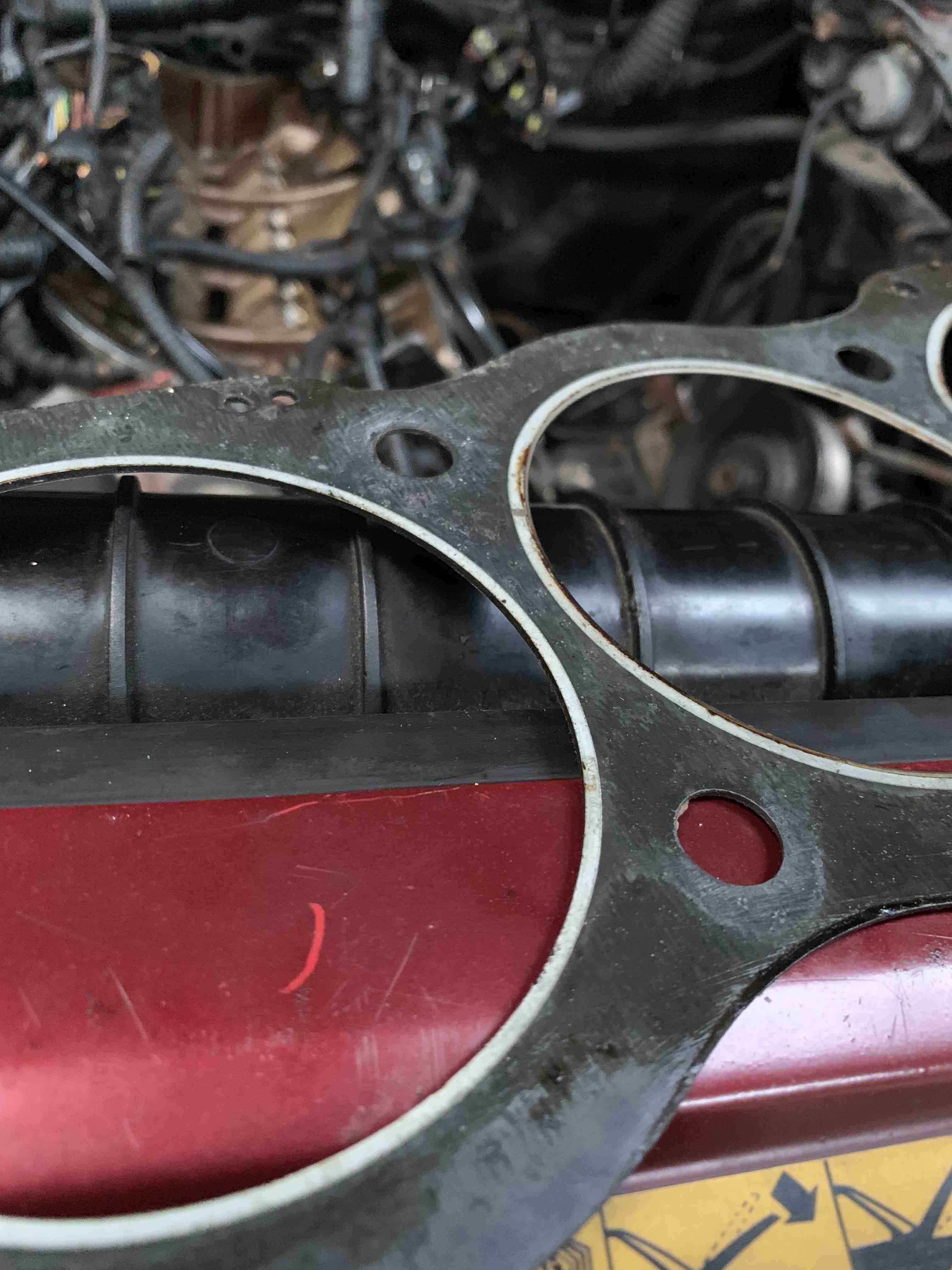 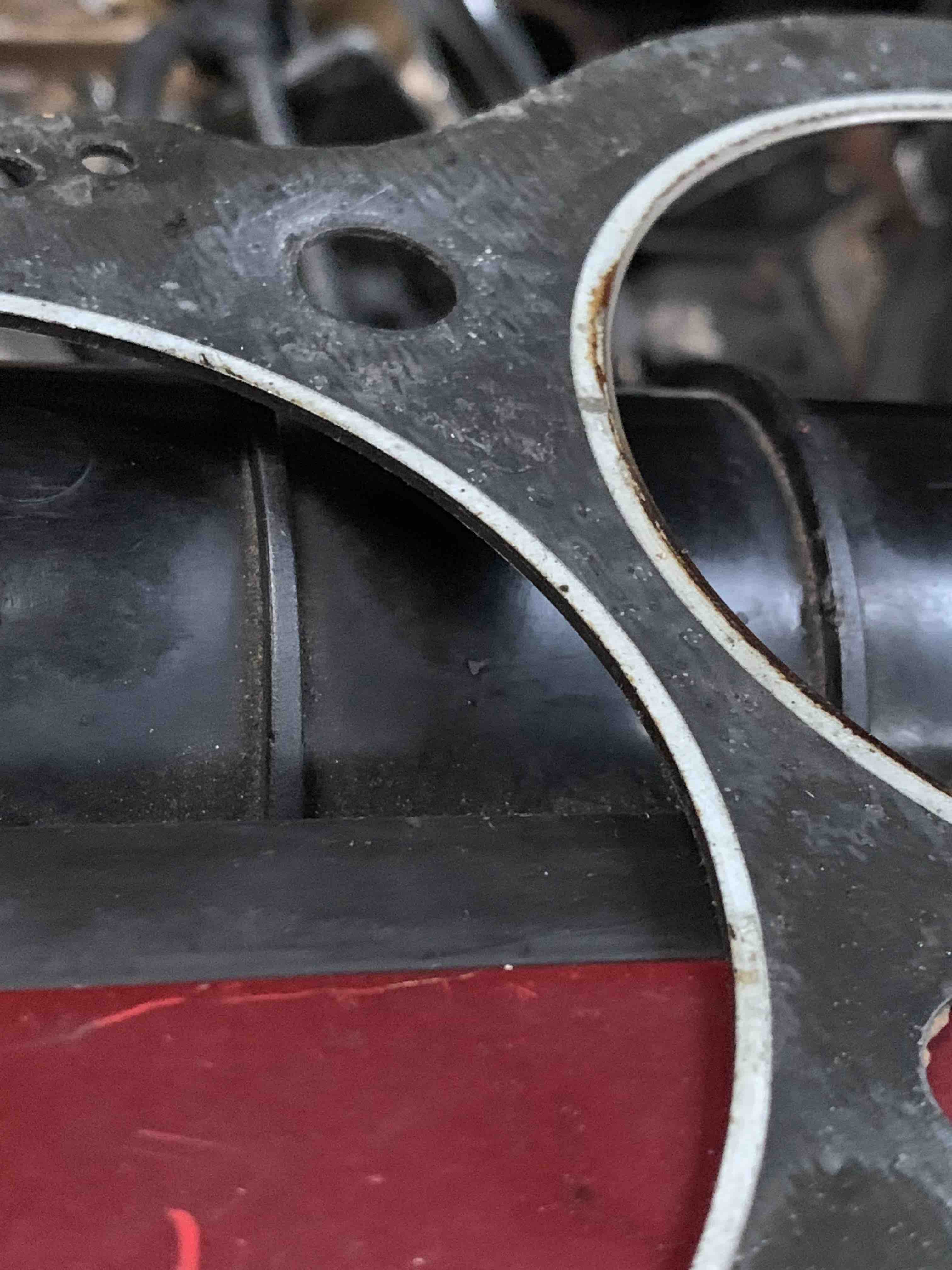 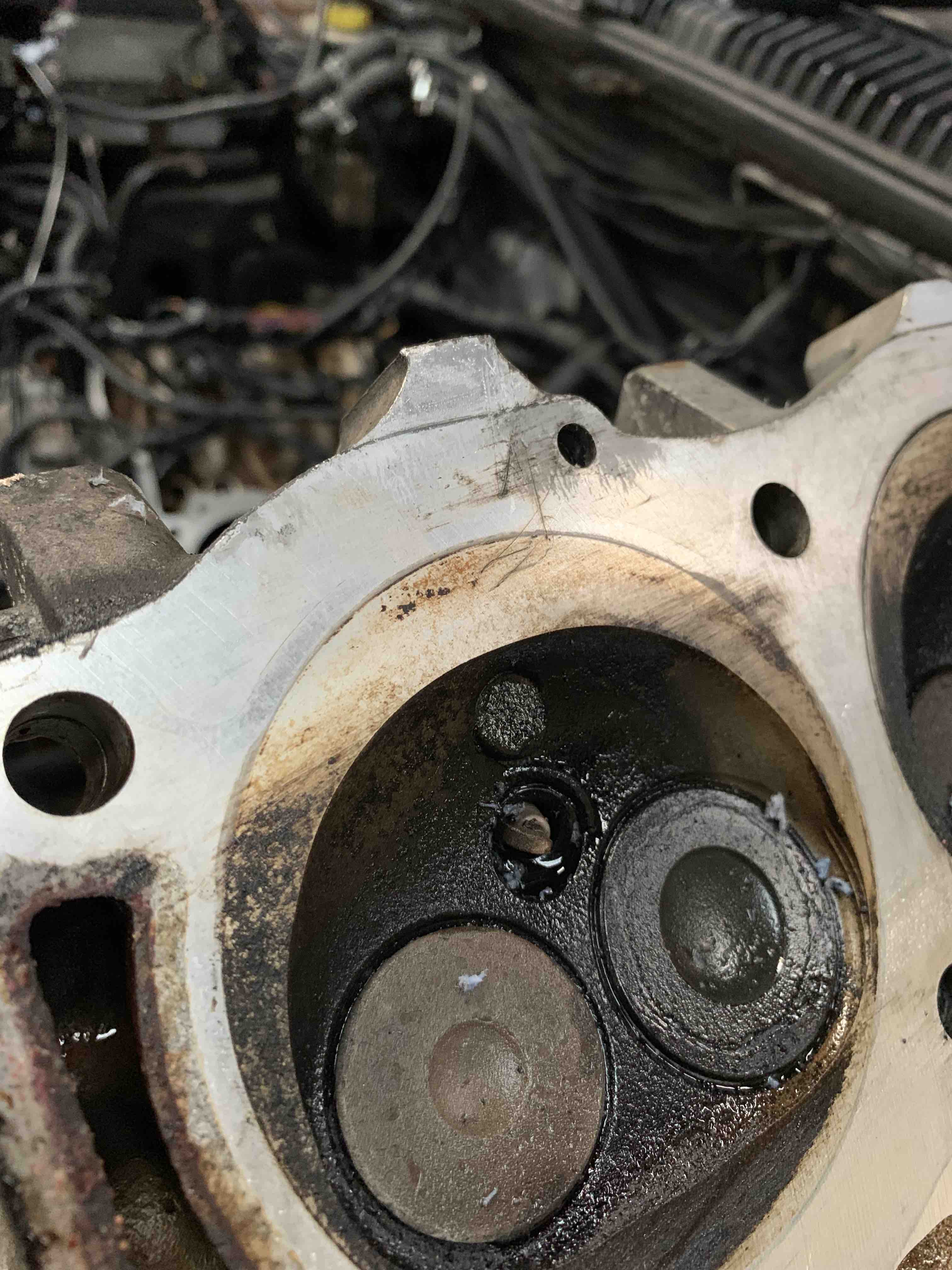 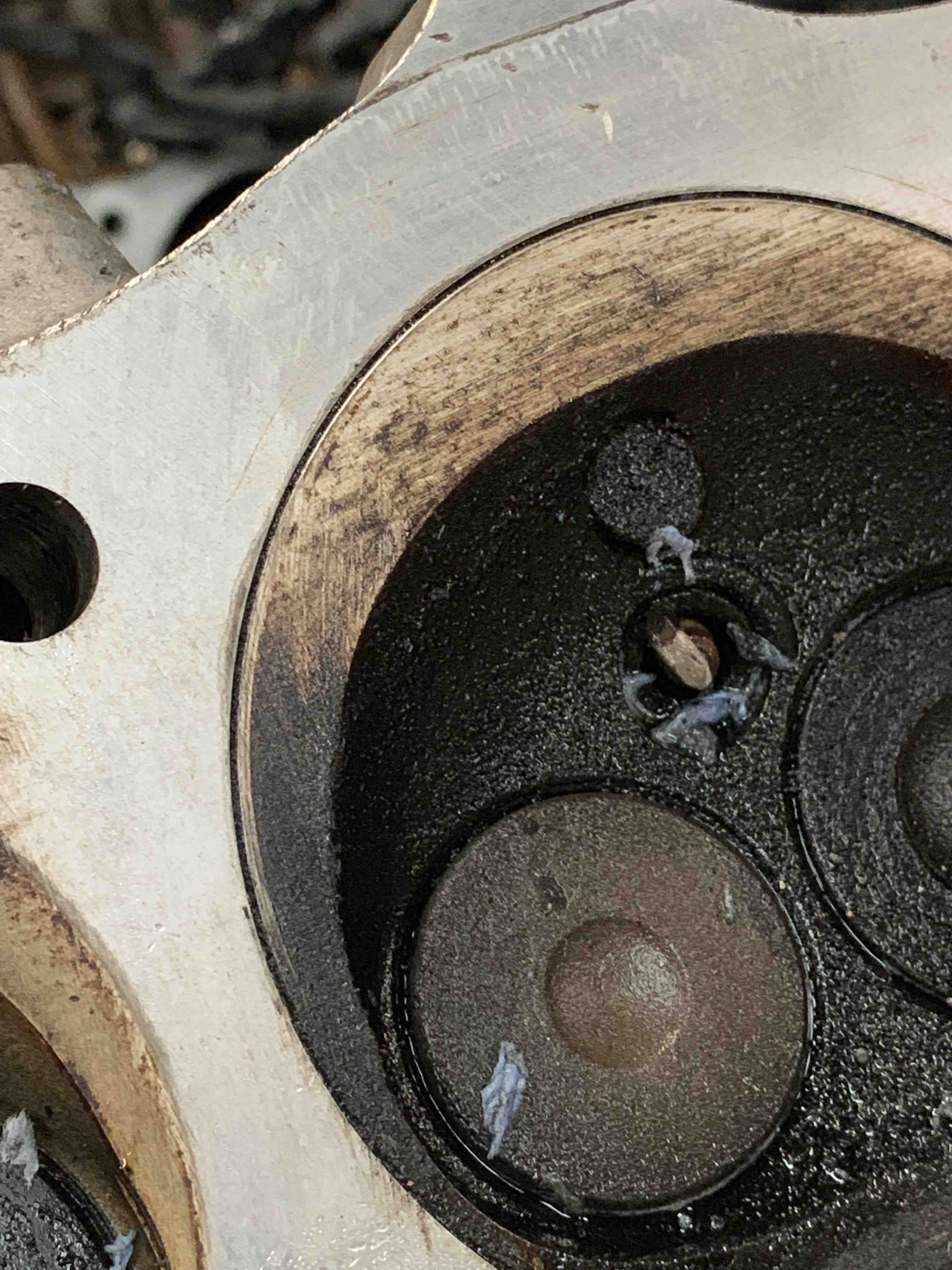 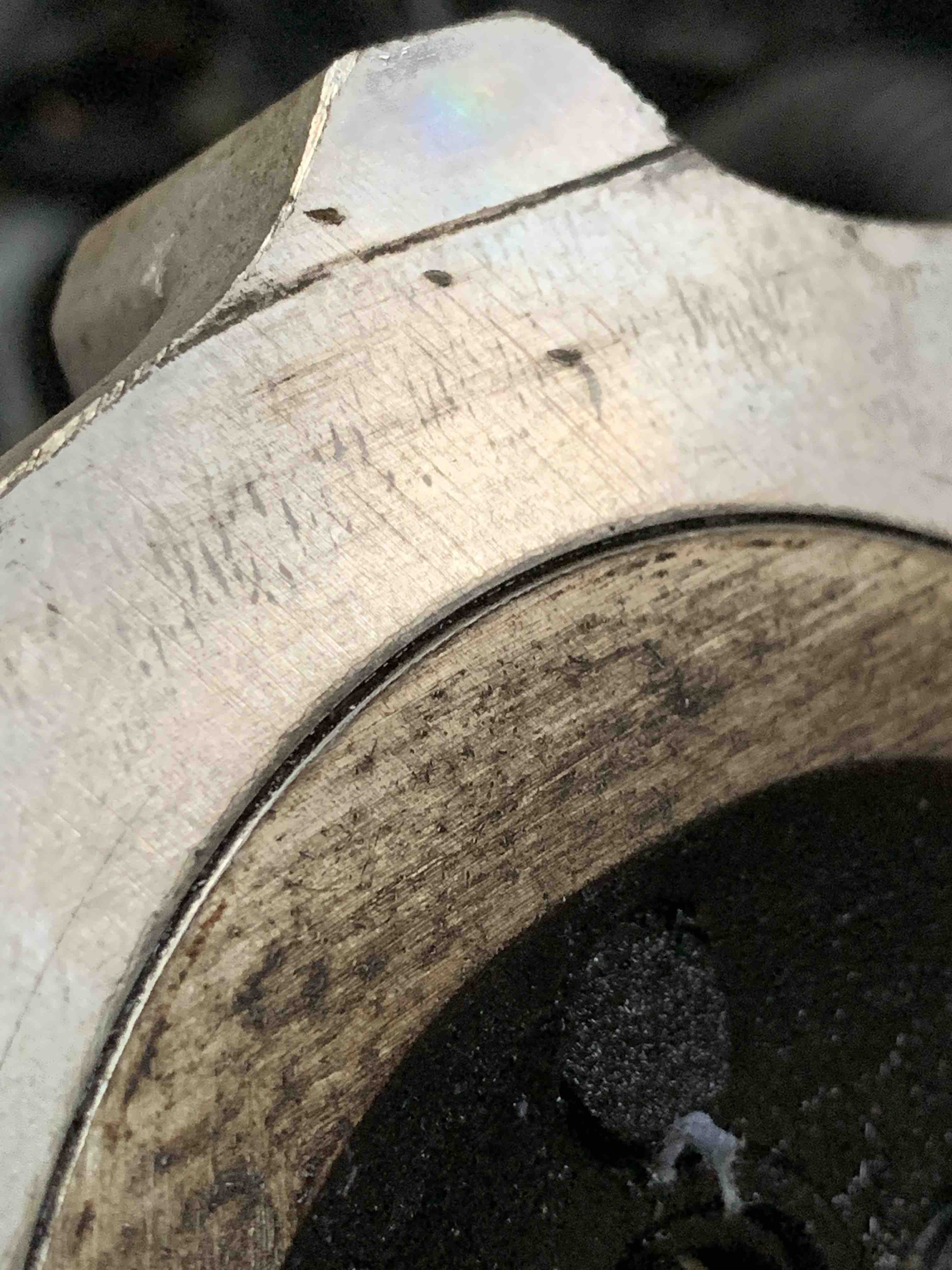 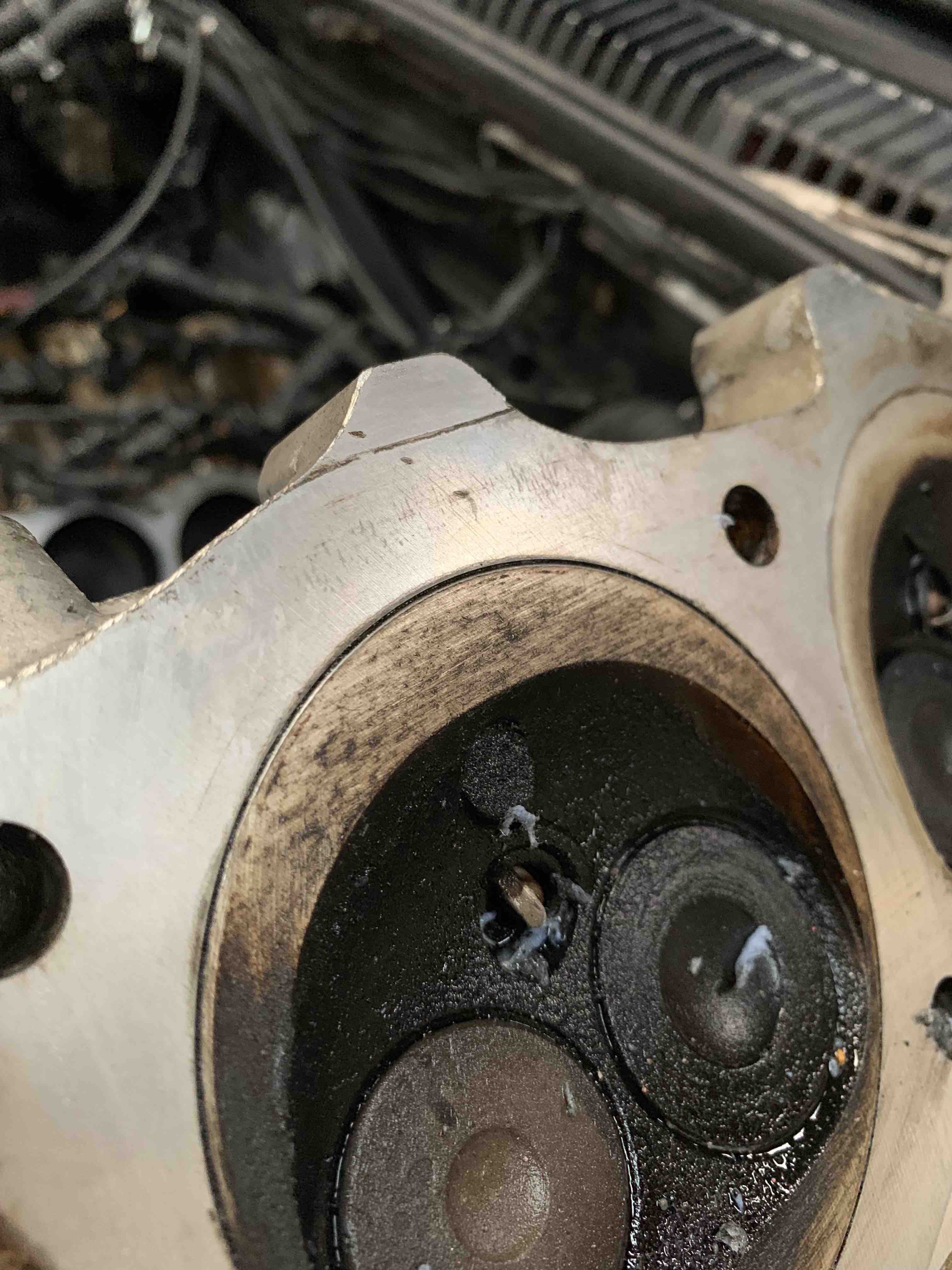 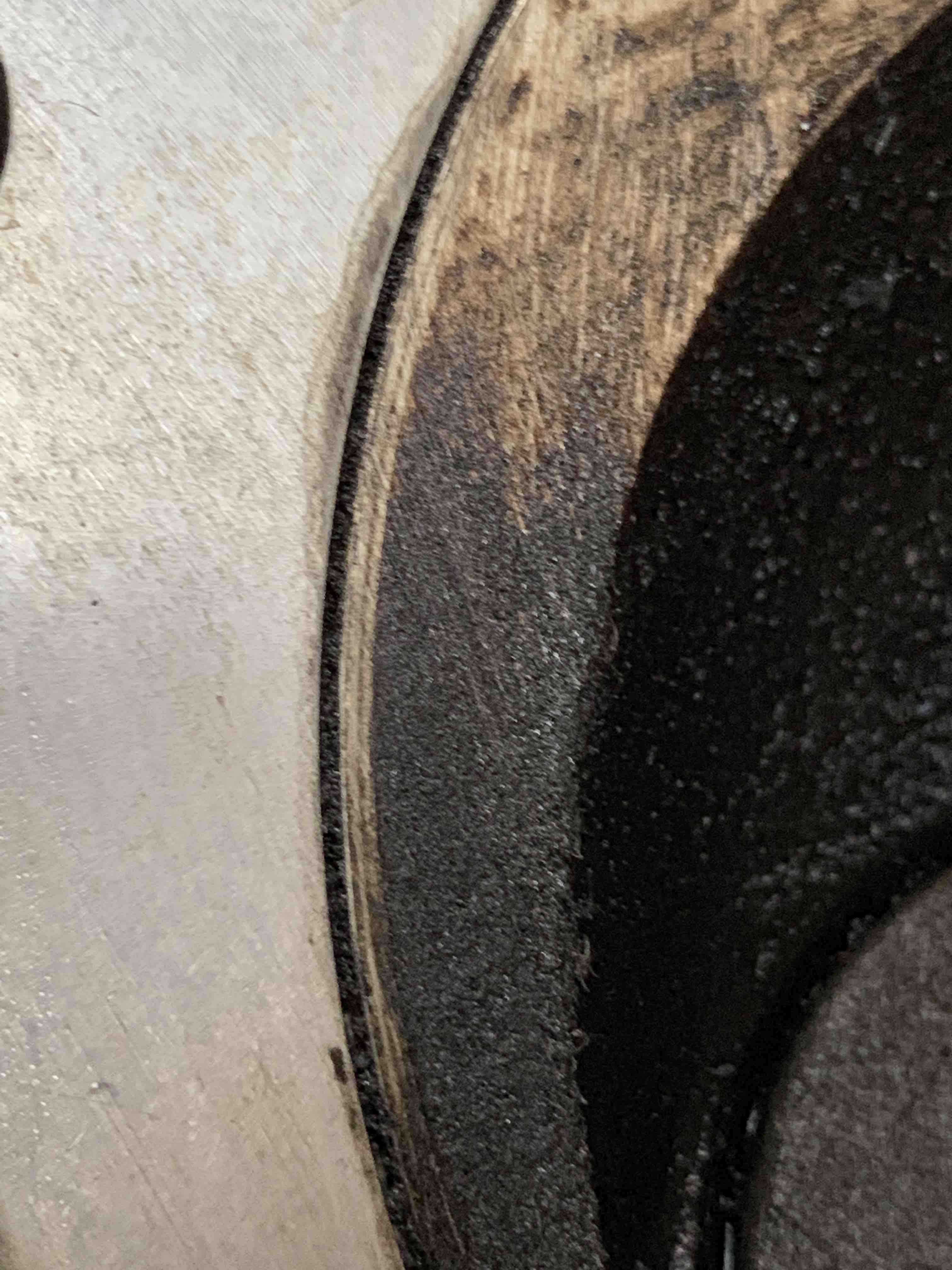 I think we have some pretty conclusive proof that the tapping noise wasn't a top end tap at all, it was in fact a slipping liner! You can see where it's cut the bevelled edge off the head gasket and you can clearly see the ring it was worn in the cylinder head around the cylinder!

Good job you found it under overhaul.

My UK '38 (like Richard's) ex-GMP 4.0L started with a delicate tapping noise when hot. Let go on the way back from my mum's funeral. Stuffed No. 7 through the inside of the block with the delicate sound like glass breaking, No mess on the road though!

Tear down showed the slipped liner.

You need to post those pictures to Facebook, you know to those that were 1 million % sure it is definitely bearing shells...

The problem is that someone has an issue and everyone jumps on the bandwagon. Then become either cynical or a true believer.

I've had a slipped liner and a destroyed engine. Only one in thousands of miles of P38 ownership.Yet folk believe it is a truth. It will happen to them. Despite my experience, I sleep easy.

I replaced my brake modulator washers with stainless, as part of a full brake overhaul. The plastic washers were in one piece, but broke under finger pressure during removal. Who knows how long they would have lasted undisturbed, 5 minutes,15 years?. Yet some people poo-poo this as an issue. I know of two failures in the Philippines (high percentage, as we only managed to get ten '38s together). Fortunately, both were at low speed, no damage to anything.. Strip down of the modulators had lots of broken plastic in there.

One issue may, rarely, raise it's head, but brings you to a stop. The other one is proven and, unfortunately, doesn't bring you to a stop.

Richard will know when they stopped plastic. 1997?

When they went over to 4 wheel traction control, which coincided with the change from GEMS to Thor. So anytime after mid 99. I think the brake modulator thing is also temperature dependant. 2 out of 10 where you are have suffered, a number in Australia have and some more in the States (but no idea of whereabouts) but I've not heard of it happening to anyone in Europe. They may be a bit brittle and break when taken out but that's plastic bits for you.

It's no different to the paranoia over being locked out and warnings never to use Superlock and numerous people wanting to know how to disable the system. I've always Superlocked mine every time I've locked it and it hasn't locked me out once in 8 years and 166,000 miles. But I did replace the door latch microswitches as soon as it started to suffer the dancing lock syndrome rather than ignore it and regard it as a P38 personality disorder.

4 Wheel traction control... Do they brake a spinning wheel (that's lost traction) then?

Yes, it uses the ABS sensors to detect any wheel turning faster than the others and applies the brake to slow it down to the same speed as the slowest turning wheel. Only time I managed to fool it was by flooring the throttle on snow. Al 4 wheels lost traction and started spinning but as they were all spinning at the same speed, all it did was slither slowly down the camber of the road.

I learned something else about P38s there. I know the model after my old BMW750 did the same, my model year just backed off the electronic throttle. Substitute for a LSD on the beemer but I reckon the braking system will be better than an LSD on a 4x4?

The new Suzuki Jimny uses a very similar system and all the reviewers seem happy with it!
It's a better system than a clutch type LSD because the bits that wear our are just the pads/disks rather than LSD clutch packs which inevitably fail eventually.
In use, there's a bit of delay between the wheel spinning and the system braking it which can make a new driver back off, but once you're in the know you can just give enough throttle for mild wheel spin and the TC will sort it out.
The ultimate option is to fit a geared LSD like a Tru-trac, Ashcroft ATB or even a Quaife (if you're very rich). The TC will do the same job but the diffs will direct torque from the slipping wheel to the gripping one and you don't burn fuel just heating up your brakes :)

Do TC systems that apply brakes ever go wrong in a way that sees them apply brakes when you wouldn't want them to? Wouldn't want to be driving along, some electronics or valve go wrong and cause brakes to come on hard at one corner.

Not in my experience, luckily!
It's effectively an extension of the ABS function (IF low speed AND brake applied - release brake, IF Spinning and Brake off - apply brake) and I hope ABS is mature enough by now to always fail safe. Hope :)

It'd be the first I'd heard of such problem too. I only ask because on forum there are people talking about rebuilding ABS valve blocks that have gone wrong, so I wondered since they go wrong if they ever go wrong in a way that causes that kind of thing. I suppose the valve blocks are made in such a way to be failsafe even if valves go wrong in the same way as solenoid packs for auto gearboxes.

I know on other ABS units which have gone bad on me it was the control electronics board that went bad not the valves themselves. The brakes would still function as normal brakes because the valves stay open and do not pulse. I would assume if it works this way on the P38 that you would only have normal open differential function at both axles but not the "Limited Slip" function.

It'd be the first I'd heard of such problem too. I only ask because on forum there are people talking about rebuilding ABS valve blocks that have gone wrong, so I wondered since they go wrong if they ever go wrong in a way that causes that kind of thing. I suppose the valve blocks are made in such a way to be fail safe even if valves go wrong in the same way as solenoid packs for auto gearboxes.

Don't know about fail-safe, the ones I know of here failed very un-safe! However Richard has a point about high ambient temperature affecting things with us in hotter climes. What I do know is that all the o-rings in the modulator, whilst not quite as buggered as the EAS valve block, certainly weren't at their best, and the tiny filter was a bit mucky. So whilst I was replacing the washers, doing the rest seemed a no-brainer, and the kit came with full replacements anyway.

Hopefully, I'll never need to go back in there again.

Interestingly, despite mine being a '95 and the modulator washers being (then) plastic, the Nanocom tells me I've four wheel traction control. However, I put this down to one of the very early car v Nanocom aberrations.

I can't believe it's been 3 months since I stripped the engine out of this car!

Good news though... the new engine from V8 Developments is ready to be collected!!

It should be beast... a Torquemax camshaft, bigger valves and gas flowed heads... I'm like a kid at Christmas! :D

I can't believe it's been 3 months since I stripped the engine out of this car!

Good news though... the new engine from V8 Developments is ready to be collected!!

It should be beast... a Torquemax camshaft, bigger valves and gas flowed heads... I'm like a kid at Christmas! :D

Bet that’s made your wallet a bit lighter, lol

Seen your photos on farcebook 😀 :)