Difference between AEB (Leonardo and Millennium) and Tartarini connections 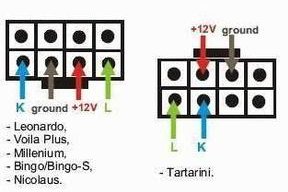 Have you made sure the turn on signal to the aerial amplifiers is connected? If it isn't you've got two aerials feeding into RF attenuators so naff all signal arriving at the radio.

The USB DAB adapters are cheapo software defined radios so not brilliant at the best of times as there is no tuned front end (as they can be made to work from medium wave up to a couple of Ghz with the right software). Very different to an actual DAB radio that has tuned inputs and will only work on DAB frequencies.

The aerials themselves are on the rear side windows, the amps for them are either side underneath the trim panels. The additional little black box on the offside is the remote receiver.

Yes, single blue wire to the etched aerial on the rest window. Just unplug it.

The fob should still work you'll just need to be nearer the car for it to pick up the signal. However that also means any other stray signal will need to be that much nearer too.

For the reverse camera I think I'm going to wire the power connections at the camera end to the number plate lights. It means I'll have to have my lights on for the camera to work and the camera will be powered up permanently but I think that will be easier than trying to run power and earth from the reverse lights in the lower tailgate, up a rear pillar, across the roof, through the rubber cable conduit in the upper tailgate and then down to the camera, I'll then connect the reverse trigger on the headunit to the BECM reverse wire as initially planned, this should then kick the headunit in to reverse mode as needed.

No need to pick up power from the reversing lights themselves, you can pick it up from a connector near the RH rear light cluster where the different coloured wires all change to white wires to go to the upper and lower tailgates. Feed to the LH reverse light is on a Light Green/Black wire and to the RH reverse light on a Green/Black.

Or, if you do it how you suggest, power the camera permanently from the ignition switched supply available from the connector behind the LH tail light cluster put there in case you want dual trailer sockets (White/Orange wire in a 4 way connector, with a ground on a Black wire). I've used that supply to put a couple of 12V power sockets in the boot.

You may find that the head unit switches to the reverse camera if it sees a video signal on it, in which case you will need to power it from the reversing lights if you don't want to have to manually select and deselect it.

Went for a run up to Tallinn on Tuesday just to have a look around and to tick Estonia off the countries visited list. Saw the signs for the ferry terminal and realised I'd said that next time we'll take the ferry to Helsinki and come back via Finland, Sweden and Denmark. Should make it interesting. Just outside the village where Dina's parent's live there's a campsite so there's accommodation there should you decide to come along (there's also a couple of very nice hotels too if you don't fancy camping). Set in the sand dunes amongst pine trees next to the beach, it looks to be a nice place (or would be a nice place in the summer, looks pretty bleak this time of year).

As Brian says, it's just to make it convenient so you have everything displayed on the one screen rather than having to look at the LPG screen on a computer and check the lambda readings on an OBD reader. Singlepoint systems sometimes use a separate lambda sensor but not always. They work best with a 0-1V lambda sensor but on things like the GEMS P38 with 5-0V sensors there is a setting in the controller to allow them to use those instead. Mine has a separate 0-1V sensor purely to drive the LPG system but the Ascot is using one of the 5-0V ones (as is Gordon's car). What I found is that at idle on LPG the sensor stops giving an output and stays at 5V all the time. This is ignored by the petrol system as it runs open loop at idle but the LPG system sees it as a lean mixture and tries to compensate for it all the time so you end up with a default actuator figure far higher than it should be resulting in it running rich all the time.

Your timings look perfect, petrol at 4.31mS and gas at 5.30mS works out to 1.23x, perfectly in the 1.2-1.5 range they need to be. So the map at idle is right, you need to see what it is like at different points on the rev range and different loads.

If indeed it does work, the perfect place for it will be up the side of the windscreen behind the plaggy trim.

Where it won't work...... Putting it next to grounded metal would be the same as not bothering to strip the screen off the inner. It needs to be in free space so would work reasonably well on a household system surrounded by nothing that is grounded but in a car might work better than a stick on the glass one (which are pretty pathetic at the best of times) but not by much. What that design is doing is creating an end fed quarter wave dipole. The unscreened end is one pole of the dipole, the stripped screen is the other end and the coil is creating a choke to create an end to the earthy end of the dipole. As anyone that uses radio will tell you, the only place for an aerial is out in the open.

Not sure if it is standard or something that plod added but I've got a grommet near where the rubber tube goes to feed power to the upper tailgate that allowed me to run the cable from my magnetic aerial into the car above the headlining. 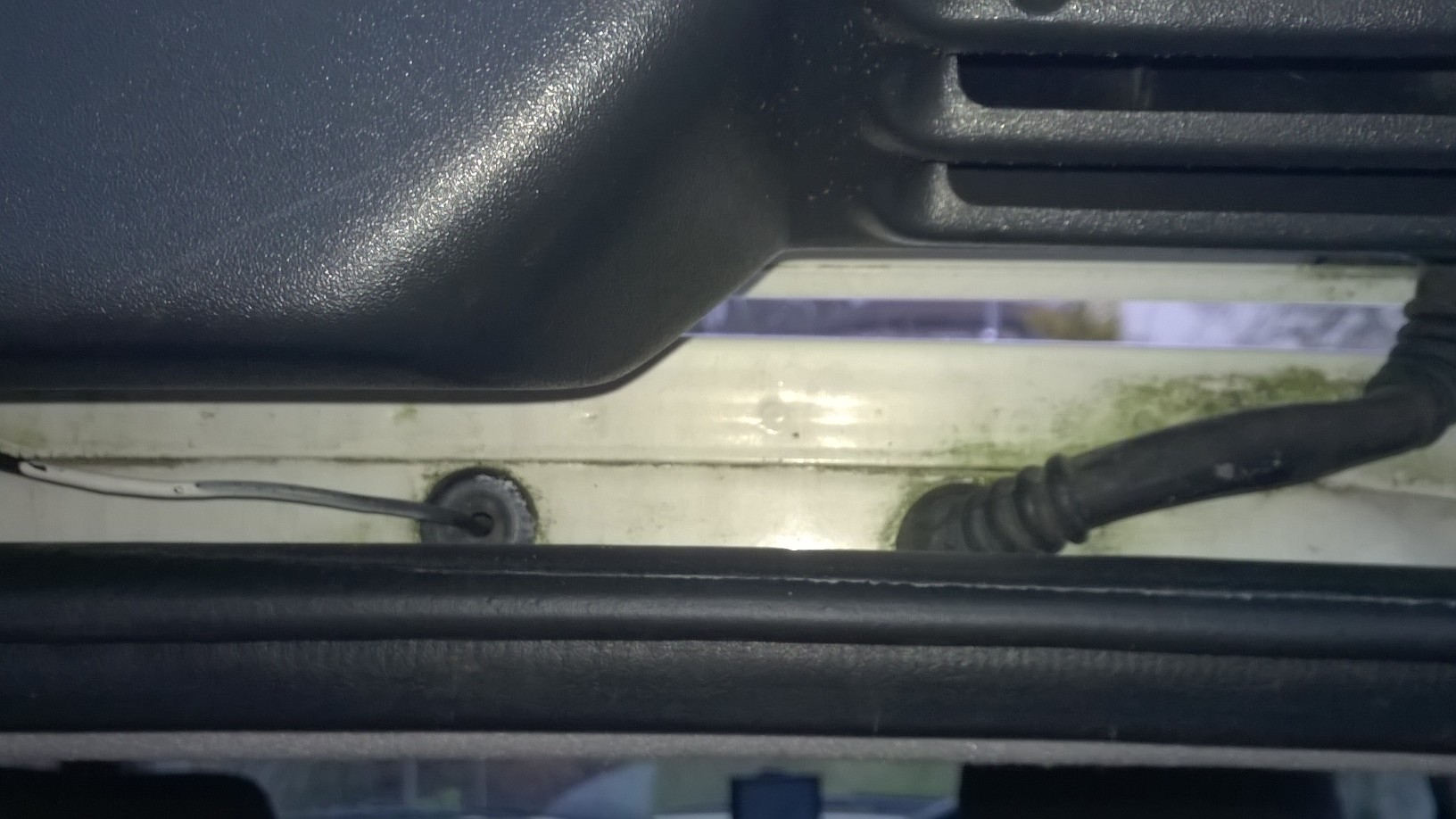 The roads are a bit mucky out here too.... 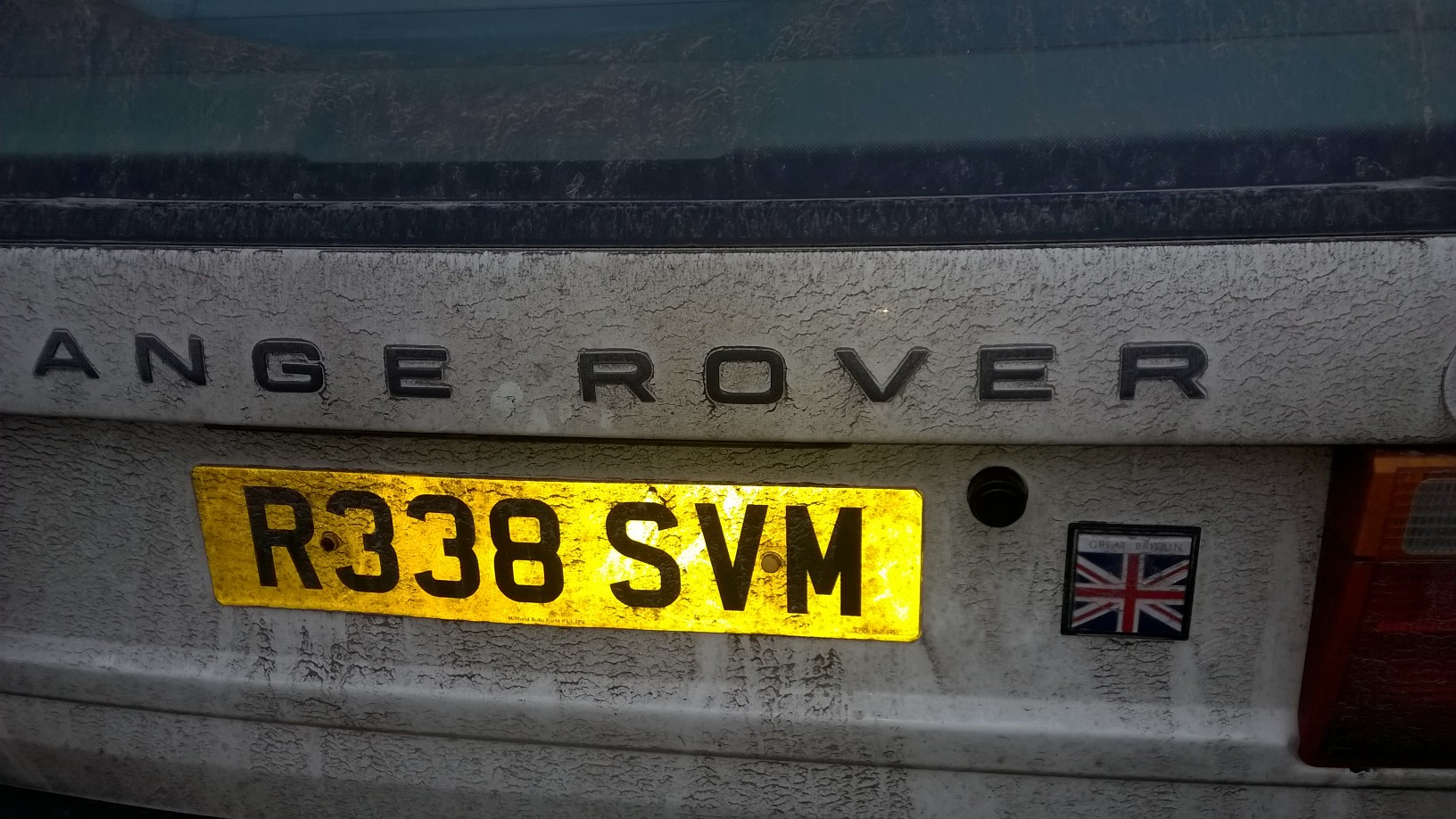 As a quick and dirty way I'd be inclined to pull the head off, check it for flatness and, assuming it is within spec, whack a new Elring gasket in there with a new set of stretch bolts. Make sure you clean the head and block faces properly. It'll get you back on the road in no more than a day (assuming it doesn't need to be skimmed). At worst it'll keep you going for a few thousand miles, or at least until the weather is more conducive to working on it. Hardest part is the manifold heatshield and bolts but you know that anyway.

Get on with it then. Should have it done by about midnight.......

The frequencies I gave are for the Morborne transmitter which is the main one for our area, so runs 66kW on each station. You've got Heart right, and I just remembered it from programming the radio in Dina's car. If the system can cope with rds it should return to the strongest signal for each station.

If you've got a 16mm, 8 point spark plug socket for the smaller type plugs, then it's a perfect fit on the head bolts.

Went to Maplins. Got the bits. Built it to spec. Looks great. Does it work? Does it shite!!!!!

Can't even get static out of it. I've tried everything and i dunno where i've gone wrong.

You won't get static on dab, but you'll get a signal or nowt. Where have you put it? I'd say that it should work if you gaffer tape it to a garden cane and stick it vertically upwards above the roof of the car, otherwise all bets are off.

Slight blowing between cylinders wouldn't cause a loss of low-speed torque, would it?

It would cause a lack of grunt right through the rev range but be more noticeable at lower revs. Much like running on 7 is noticeable at idle but once the revs are up it's just a slight lack of poke......

I can't remember if the pictures of the connections are of the plug on the cable or the plug on the ECU. Easiest way to check if you have a Leo/Millennium is to identify the 12V pin and work the others out from there.

Is it done yet?

Afraid to say it does nothing for me. The colour is boring (with apologies to anyone that has one in that colour) made even worse by the bumpers and other trim being body coloured so it almost looks like it's been dipped in a big vat of paint and the interior with the dark coloured seats but Lightstone coloured trim just looks odd to me too, it wants to be one or the other, not looking like someone has changed the seats but nothing else.

and someone's drilled a hole in the roof to fit an aftermarket radio aerial......

In answer to those that think a P38 is unreliable, we got back home about 5:30 this morning after a completely uneventful run. 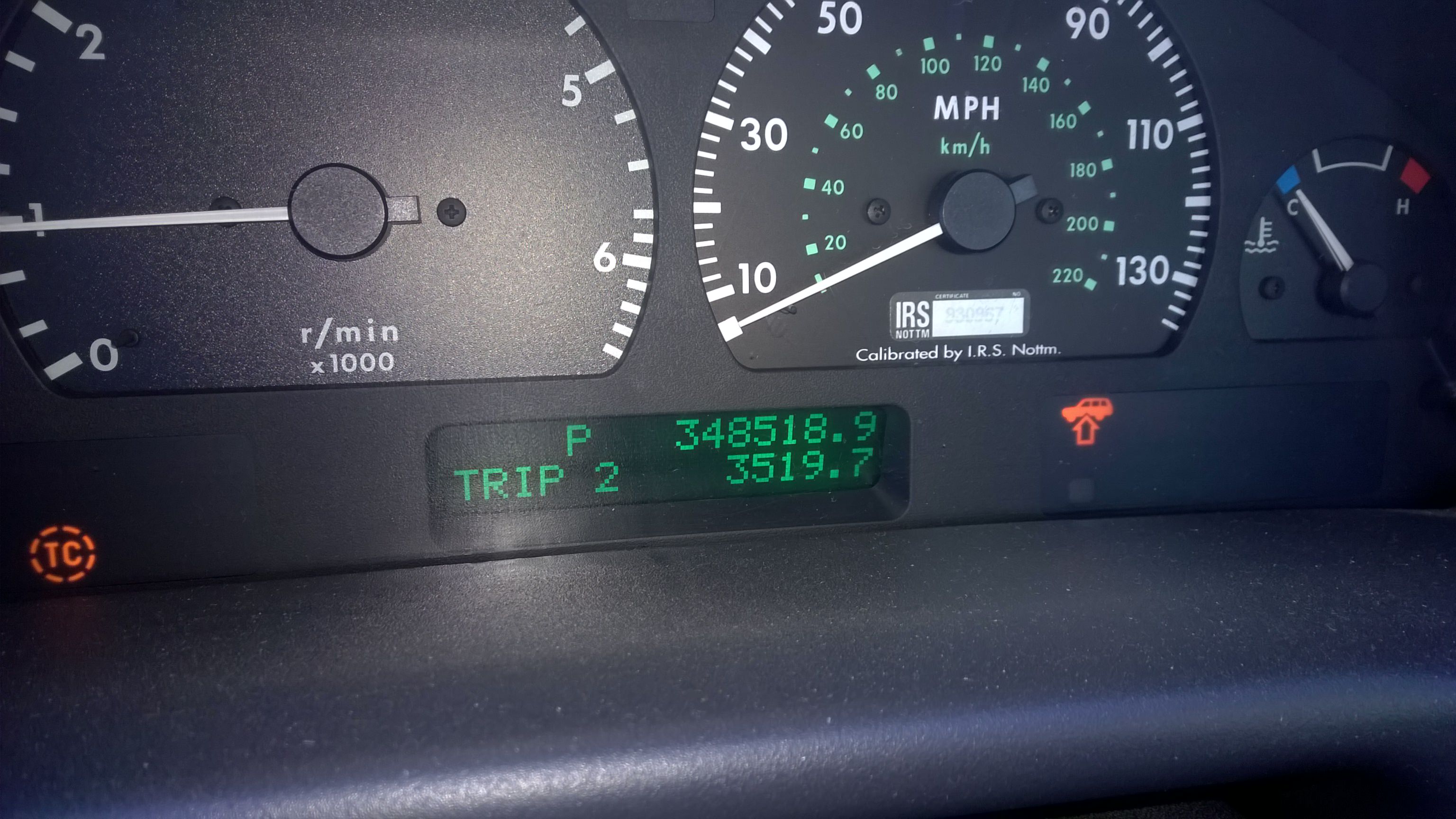 Opened the bonnet twice in that time, once when I arrived in Latvia and again when I got home. No coolant loss, minimal drop in oil level and nothing else needed any attention. The trip meter is actually 153 miles short as I forgot to reset it until I was getting off the ferry in Calais on my way out. The new set of Vredestein Quatrac 5 tyres fitted before leaving seem pretty damn good. Didn't get the chance to try them in anger on snow but in the wet (of which there was plenty....), they gave a lot more feel to the steering than the Goodyears that were on it before.

Economy was pretty amazing too. I know the LPG sold in the UK is 100% Propane and in Europe it is usually a blend of Propane and Butane which, in theory (due to the stoichiometric ratio for Butane being lower) should mean you use less but I wouldn't have thought it would have made this much difference. Pumps are going to vary so a fill isn't always going to stop at exactly the same amount but by dividing mileage with fill quantity would give me a miles per litre figure. If this was then multiplied by 4.54 would give an mpg figure or by multiplying by 67 litres would give range on a full tank. Every fill was good, and there were quite a lot of them, but would you believe 228.2 miles on 59.29 litres? That's 3.85 miles per litre, or 17.5 mpg, and a theoretical range of 257 miles. That was cruising at anything between 65 and 80 mph (depending on traffic) through Germany, Holland and into Belgium. The gas pump I filled from in Germany had a label on it showing that in summer it gave 40/60 Propane/Butane and in winter 60/40 Propane/Butane but how much of an effect that would have I've no idea. No matter, it still worked out cheaper on fuel than it would have cost the two of us to fly there and back.

Just got to clean it now, it's absolutely filthy!