Had one before and saw this one for a price I couldn’t refuse.

Well, lawks a mercy, well I’ll be, knock me down, who’d have thought it, etc.

So, last Friday was designated vehicle registration day. The time off was duly booked and Tania (the lovely step-daughter) volunteered to accompany me, mainly on the promise of a Full English afterwards at a little bar I happen to know.

Now, just to double check, I’d been on the Land Transport Office website just to confirm they were still doing walk-in and that I didn’t need an appointment. No mention, great.

07:30, up we roll. I’m greeted by my little mate who tells me that they can’t do emissions tests any more and that I’d have to go to this other place (which I’d basically driven past on the way), get tested and then return.

Off we pop and finally find the place but, hold up, this isn’t an emissions test, it’s a full blown “MOT”! Ah well, in we go and park up. I’ve no idea how it all works and, it seems, neither do many of the staff.

Seems to go like this. Pull in and directed to a slot by a little chap who gives you a number (of course). You then go and pay and are told to go to the waiting room. Now, I’d espied some brake rollers and, keen to not have my gearbox climb into the passenger seat, went and spoke to someone about how they tested permanent four-wheel drive vehicles. He didn’t know, but he thought he may know someone who did.

Eventually another chap arrives and asks me what the problem was. I repeated that I was only curious about their brake testing methods for full-time 4x4 vehicles. He smiled and led me over to the roller area and pointed to a set of dummy rollers that went under the non-tested wheels. He said he’d make sure they were used on mine. We also chatted about testing prop acting handbrakes and I went away reasonably happy.

Anyway, instead of sitting in the waiting room, I left Tania in there Netflixing away and went to stand outside to watch. Good job too. After 15 minutes or so, the manager of the place, Mike, came over and asked me if I could open the tailgate for them. Every day’s a school day!

Got chatting with him and said that whilst I applauded the move towards more stringent testing, I was a bit peed off that there was no mention of it on the LTO website and, had I known, I’d have given her a quick pre-test check and come here first, before going for registration. He replied that it only opened last Monday and he’d been getting grief ever since then from motorists who, like me, were told just to nip there for emissions, no mention of a full test. Anyway, we chatted for a bit whilst his minions crawled all over, round and under the P38 until eventually we had a verdict.

It failed! First thing was a gearbox oil leak. This isn’t, it’s from where I was refilling the box via the dipstick hole, with inevitable overspill, but never mind. Second was the lack of an early warning triangle, easy fix and third was a bit bizarre. Brakes. They told me they worked and stopped within parameters, but they thought the pedal went a “bit too far down.” Hmm, no point arguing, I’ll give ‘em a quick bleed.

So there we are, not bad for it’s first, and unexpected, test in who knows how many years. More fluid on the way, as I haven’t quite got enough in stock to be sure, warning triangle, ditto, and “gearbox oil leak” already wiped away. I’ll give it a wash off when I bleed the brakes, so it’s nice and clean under there for them.

I’ll aim to return this Friday morning and, probably because I didn’t curse word and moan, Mike said they’d do the retest for gratis, rather than the normal 50%. Nice guy. I’ll get some pics of the place as well. I'm also guessing that it’ll probably involve another breakfast too!

Fitted Vogue's new water pump , tensioner and pulleys today Only been carried around in it for about a month ---- took minutes to fill up again ---- using low air pressure through line from top of rad to bottle ---- filled bottle put cap on pull trigger to pressurize water drops release cap and repeat fill process took about 10 mins total 🤗

Nice one, what did you do with the brakes? You don't normally get too much travel when they need bleeding.

Great news on a pass!

I need to get mine MOT'd at some point this week so here's hoping it's a good time for P38's!

Nice one, what did you do with the brakes? You don't normally get too much travel when they need bleeding.

Put several litres through them, much to My Little Brake Bleeders disgust. Every time I'd pop up from underneath to top up the reservoir I'd get, "All done now, Daddy George?" The sort of brake pedal pressers equivalent of, "Are we there yet, Dad?" 😀

To be fair it's probably three years since the rebuild and they were last done. Feels much better now anyway, and it only cost me a teenage Filipina sized breakfast!

Today I picked up two air blocks in great condition and a set of new heater elements, all for less than $100.
Thinking about tapping the air ports and trying compression fittings.

Dear All,
I've gone LED USB crazy. Bought a cheap USB cigarette plug-in, changed the LED for a green one, re-carcassed it and here you are. Apologies for the dirt. As I don't use the ashtray but do use the fag lighter socket, I've got a pair of USB charge sockets in the ashtray itself powered from the underside of the lighter socket. I've also fitted another lighter socket on the side of the centre console which powers the sat nav and dashcam and another on the back of the centre console below the rear passenger vents for anything else. You can never have too many power points. Now you've got to sort out the book on the HEVAC.....

After reading through TKing88's thread on preventative maintenance (paraphrasing here) I realised I hadn't greased the U-Joints since owning the car so that got done last night.
After cleaning out the grease gun (no idea what grease was in there) and refilling it with a known grease the job actually went quite quickly. Good.

One not good thing was that I noticed that 3 of the 4 rear propshaft bolts on the transfercase side were completely loose, like rattling. Not good at all. They tightened up fine but I'm sure they are damaged so I'll probably get 4 new ones and replace them (any advice before I tackle it?).
Also, is this a common problem? Do they get loose over time, or is this a PO that didn't tighten them up properly? I checked all the other prop bolts and they were all as they should be.

They will only be loose if they weren't properly tightened up before. They are a bit of a bitch to get a socket on to which could explain it. To change the bolts you'll need to take the parking brake drum off (slacken off the 17mm headed adjuster on the back so it slides off) and the output shaft flange. The bolts push through the flange and are held in place with a big circlip. While it is off it's worth replacing the output flange oil seal as a parking drum full of ATF doesn't help with braking efficiency.

I did away with the ash tray a long time ago. I have fitted an air pressure gauge and a manual switch for the aircon fans. 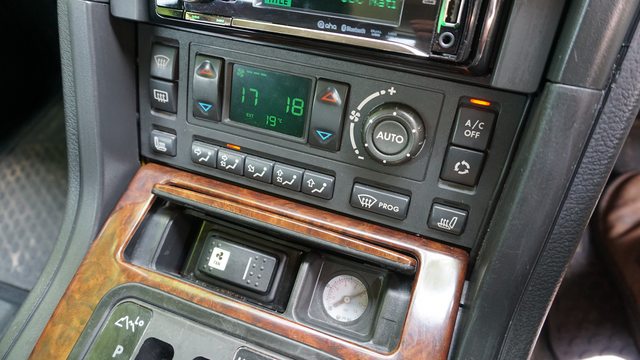 With the flap closed it still looks standard.
The picture was taken a while back I see. When the aircon worked. Book symbol is now on, like most peoples.
A job to do in the spring when the weather warms up. 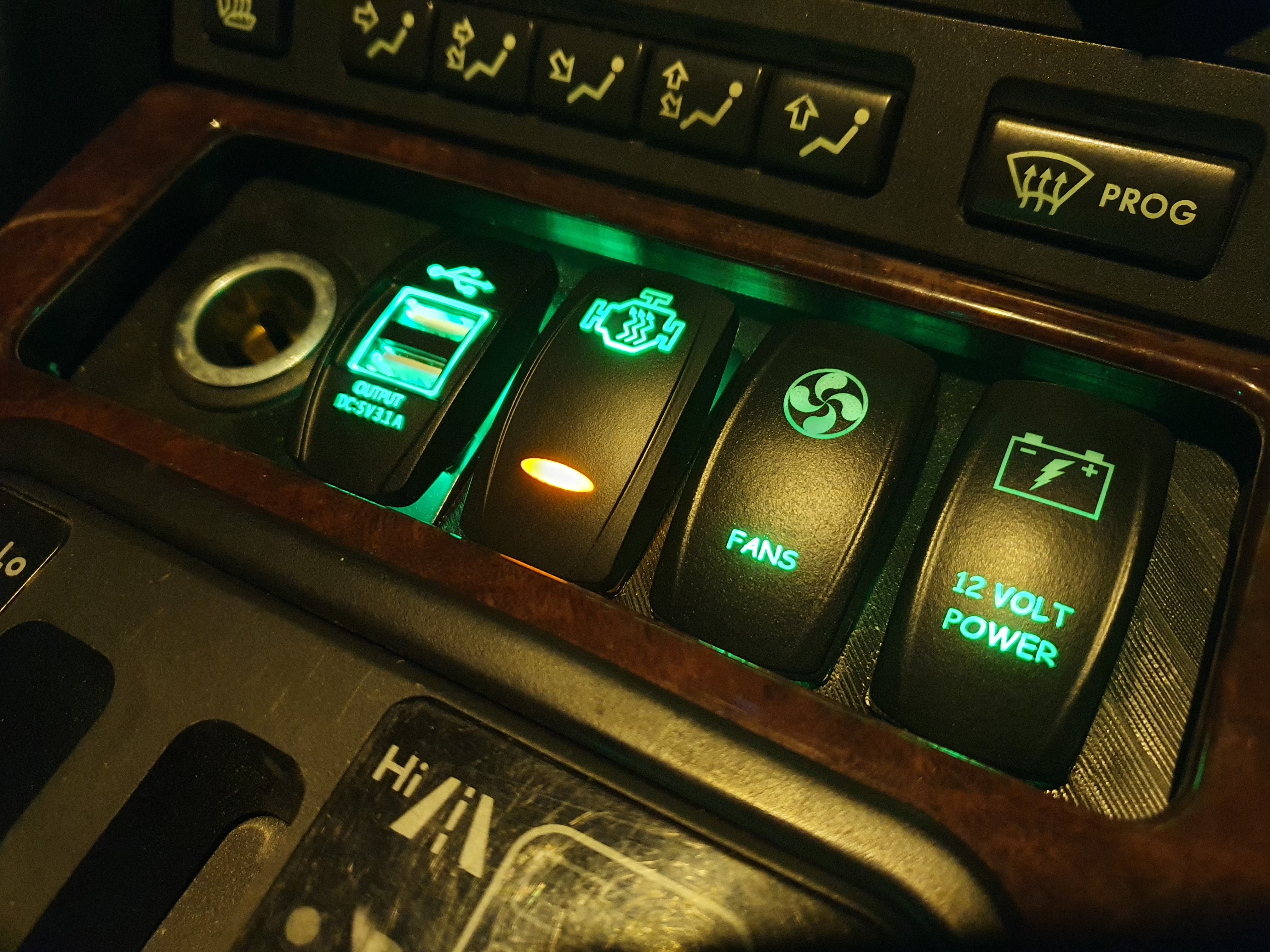 I did away with the flap, as I never had it shut anyway. Either something plugged into the 12v socket or USB outlets, or wanting access to the switches. Currently a 3d printed panel, but will be replacing it with a CNC cut steel version soon.

Nice job, Sloth.
Is that a 3D printed panel I see? I might steal some ideas.