You are talking about the copper washer/seal where the injector screws into the head? I couldn't find any either. No demand I guess. Opels and Vauxhalls that used the engine have long since disappeared, just a few p38's left now.
If there is a local diesel repair shop that repairs pumps and injectors, they may be able to match it if you take an injector in. They are Bosch injectors and it is a BMW M51 engine. You need a special socket with a cutout in it to get the injector out.

I don't think battery warranty's are worth the paper thay are written on. It is easy for the supplier to say the battery has been misused.
Invariable it has to be posted back to them for testing.

+1 on second-remote-repair. He got my spare remote working again. Don't go to a company called Fobfix. Bad experience.

I just did a search and came across this:

The worst car ever made was the Austin Allegro. My next door neighbour had one. Awful car.
You could describe it as just an A to B car, but even that is being generous.

I have done the top part of the clip, if someone wants to volunteer to test it. 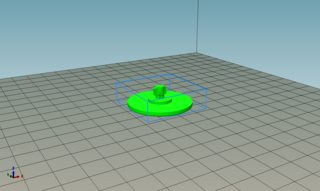 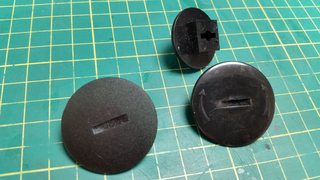 Originals on the right and my version on the left. I don't know how to do arrows so I have left them out.
Bottom part is a bit more complicated due to the screw so will follow when I get my brain cells working again.

The BMW M51 diesel engines usually have a long life, Even so, I would get them to verify the mileage. You want less than 200k miles, preferably in the 140 to 160k range. Problem is they are 20 to 25 years old now though.

You need to get exactly the same engine as yours i.e. either with egr and plastic manifold or earlier non egr with alloy manifold, otherwise it complicates things. You want it complete with the FIP, injectors and engine ECU so you don't need to change the EMS code.
The FIP is worth a couple of hundred pounds so they may take it off and try and sell you a bare engine, then you will need to fit another FIP and time it all over again. I would say £600 max for a good s/h diesel engine, without delivery.

addendum: My thinking is warped due to old age. Use your existing ECU and there will be no need to syncronise the EMS code in the BECM.

Thanks, Kurt. Another forum member is lending me one as well, but photos with a scale alongside will get me started.
The prototype v1.0 will then need testing to see if we need v1.1.

I just need a photo or two to get me started, if there are any volunteers. Photos with a ruler alongside preferably. Printing in ABS makes it a lot easier.

The brake disk covers are ridiculously expensive, the best part of £100, much more than other L/R models.
Pity I don't have a printer that goes that big. My build plate is only 220 x 220. Could be done in segments maybe and then bolted up.

I play about with 3d printers as some of you may know. Dave3d get it? Also I live @ 3 duttons lane by the way.

My car mats are not OEM and don't have plugs unfortunately, otherwise I would have a go. The drawing is 90% of the work. The printing bit is easy. There are plastics out there that are rubbery or flexible but I have not used them as yet. I usually use ABS. I assume the plugs are rubber?

Kurt: could you send me some pics of the parts and I will try and do a parametric design. This means the various dimensions can be varied easily.
Once we have a rough model we could try it out and then fine tune it. I am keen on developing a library for p38 plastic parts.

As an aside, anyone on here done lost wax casting? Print a part in plastic on a 3d printer then use it as a template to cast the part in aluminium.

I recently did my roof lining so had to take all of the pillar trims off. One or two of the tabs on the back side of the trim, where the clips push onto, got broke. For what it is worth, they are easily fixable with a soldering iron and a length of ABS filament. Helpful if you fish out the broken tab from car body and join it back.

I can confirm what others have said. The Hankook battery fits OK without any problems.
The terminals are more towards the middle of the battery but the cables have enough slack in them to reach (my cables are original). 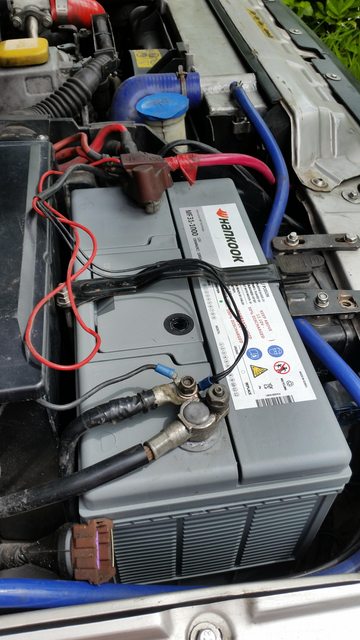 The battery clamp also fits as well. I have a winch control box next to the battery.
Anyone know what the unused plug is for at the bottom of the picture. Can't think what it could be. Maybe the alarm which I disconnected a while back?
As Morat says, it really spins the engine over. Like about 10,000 rpm and mine's a diesel !

Still waiting for theHankook battery. So much for next day delivery.

I have got a small Ctek smart charger and I was toying with the idea of permanently bolting it in the car, probably in the boot on the left by the bass speakers. Would the current run back through the charger though? or would diodes in the circuitry stop it ?

I also need a big heavy duty charger/ boost starter. 200 amps min. I have got a diesel.

I have never even heard of anyone doing it to a p38. I have only ever seen the body taken off a classic when it was bolted into a rotisserie jig for welding in new panels.

FYI for guys in the UK, Hankook MF31-1000 batteries are back in stock.

I have just ordered one as mine is a bit iffy. Next day delivery they say.

I am looking around for a decent heavy duty battery charger/booster as mine packed in and I have only got a small smart charger. Any recommendations?
I fancy the Clarke range in Machine Mart.

Well, I am £900 poorer. I picked the car up today with the old transfer box back in. Back to square one.
I did however get new engine mounts and a new gearbox oil seal.
I spoke at length to the workshop foreman and the mechanic who actually did the job.

Facts: with the new transfer box fitted, there were no problems running the car in neutral. It was only a problem when it was put into drive to move the car. There was a horrible crunching sound. He said he didn't make too many attempts but there might have been damage caused.
The car was pulled out of the workshop to park up outside to get on with other jobs. There were no problems towing it which proves the chain and drive side is OK. The high/low motor also works OK.
The mechanic reckons it is the viscous unit (originally new and unused). Because of laying up for 10 years+, the oil can settle in one place?? possibly locking it up?? Can you believe that??
I had the viscous unit out to have a look at it when I previously had the box on the bench. I don't think I could have assembled it wrongly.

The next stage, I think I will try fitting the new viscous coupling to my old box in the car to test it. It is fairly easy to do.
I need to get geared up to changing the transfer box myself. Richard: you mentioned using a scissor lift was preferable. Any recommendations?

What is more disconcerting is a comment by the workshop foreman that Landrover parts that have been rejected for quality control problems and should then be scrapped, find there way back onto the market. As an example he said about Freelander diff units that were destined to be crushed then are sold off as new. The scrap yard is contracted to crush the parts but if there is money to be made.
His garage had been offered them in the past. I don't think that is the case with the transfer box though.

I have used Ebay a lot over the years. My count is up to nearly 1700.
There has been the occasional problem, mainly with with used auto parts. I have had a few items where the part does not match the description.
Sellers describing a part as "good condition" where it is down to interpretation. Private sellers are usually OK. I think it is mainly breakers.
Some electronic parts as well, particularly for computers. If it says "untested" it means it has been tested and it is f**ked.