@StrangeRover that is an interesting fan you have there. After market?

As for me, washed mine. 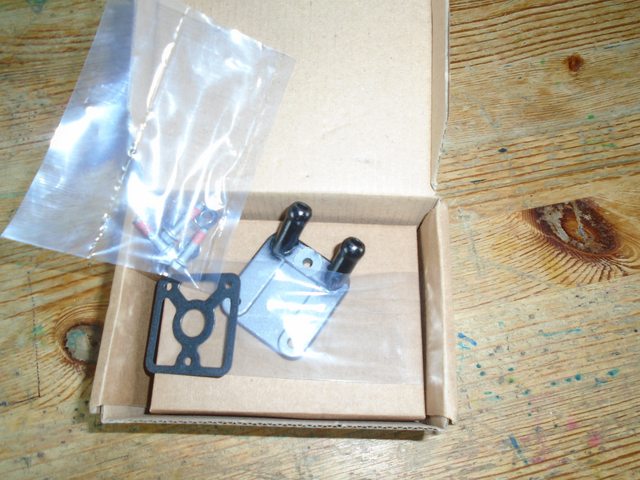 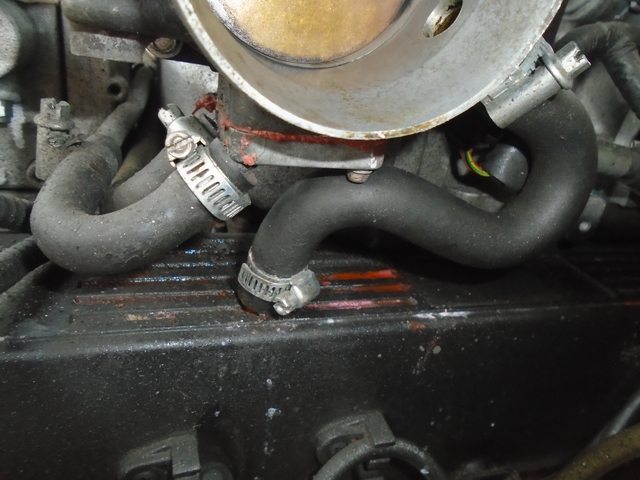 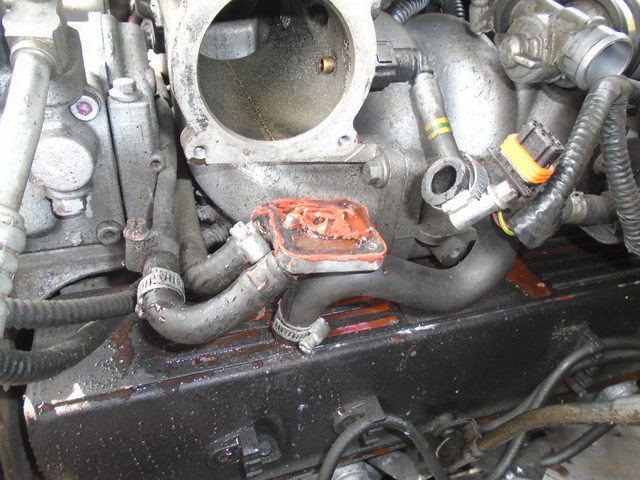 new one fitted and so far no more leakage, or steam from the coolant hitting the manifold! 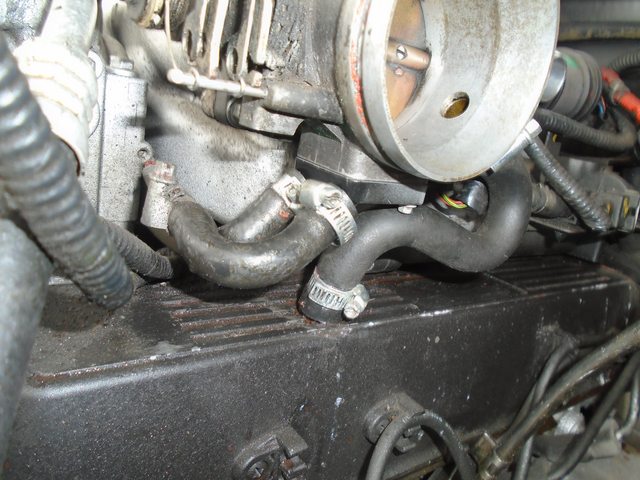 Replaced the intank pump and fitted new tank seal/gasket.
I was not sure what seal to order as there are two types WGQ500020 and NTC5859P and my Microcat PC is down.
Not sure why there are two, early and late? or diesel and petrol?
Ended up ordering both. They are both the same diam but WGQ500020 is a shallower ribbed design and fits better, imho.
It was awkward trying to fit the new pump. Best method is to press the gasket into the tank first, then press the pump down (against spring pressure) through the gasket. Check it is seating correctly all round then finally screw the retaining ring onto the thread.
Tighten using the special tool. Did all that and refitted the fuel pipes. Checked fuel flowing to the FIP banjo and refitted it.
Got someone to crank the engine and cracked a union at the injectors. Started immediately. Phew.

Drove it to work again.. like most days now. Overtook a pickup and trailer and gave him a nice v8 roar through his open window. Lucky chap.

I borrowed an Ifor Williams vehicle trailer from a mate (massive thing!) and towed my Jeep to Elland in West Yorkshire to get a new head gasket.
It was the first time if loaded anything like that amount of weight on a trailer and....I lived!
It was quite sensitive to the steering so I definitely stuck to 60 on the dual carriageway. I probably had to much nose weight, but it turns out that ratchet straps are my Kryptonite.
It's hilly near Elland but I didn't drop a Jeep on any locals so I'm calling it a win 😀

Light steering means you are right and had too much nose weight. Although the EAS keeps the car level, there's still more weight on the back axle than the front. When loading the weight on the back of the trailer will try to lift the back end initially then drive (or winch if it's dead) the load on until the back of the car drops to level. so you'll know when it's right. Too little noseweight and it'll start to snake at speed, particularly when going downhill. Not making any sudden movements is the secret to relaxing towing, so when changing lanes you allow the car to sort of drift across the lanes rather than steering it across them. As well as ratchet straps around the wheels, I always put the handbrake on, whatever is on the trailer in gear or park if it's an auto. and use the winch cable as a safety line so even if everything else fails, it'll stay on the trailer.

im with you on those straps , they are some how upside down inside out with a twist but they do a very good job when they on properly . as for towing (alot depends on the actual trailer) the last two recoveries i done i put one on backwards and it towed better than the one that was on front ways, thats how they where in the drive way when i picked them up . when you get used to a trailer you just know if the vehicle should be hard up against the front of the trailer or if it should be back a little to even out the weight . when using a trailer for the first time it is a bit of a guess.

I reckon you're right! The trailer had wheels quite far back and the Jeep engine was well forward of the front trailer axle. I had the tow bar (of the Jeep) just over the rear of the trailer so there wasn't much more space available at the back.

Having checked on the Ifor Williams site it wasn't a car trailer at all but a low loader, but it was plated higher than anything in their current range and had vehicle ramps and a really heavy duty plywood deck.

Apparently the previous owner used to drag a 3.5 ton tracked digger on it so that probably explains why The Duchess got a bit breathless going up a 13% hill.

Still, she managed it all Ok and there were no wobbles at all. It's always fun to learn new skills 😀

Very excited, having taken off the drivers' side side step, given the rubber a good scrub with a wire brush, then a scrub with washing liquid and wash/wax mix, and lastly polish it off with spray wax. As I had done this to the passenger side earlier I now have both side steps looking good.

I also drilled out the fixings and fitted new stainless steel 8mm bolts right through. Someone had fitted 6mm bolts and I felt that they were way too small, and bound to break sooner or later.

I also found out something about electrical cables, as well. If it helps anyone, if you have a trickle charger plugged into a trailing socket which is run up under the passenger side of the car, in a gap under the EAS block and beside the engine, don't move the vehicle without unplugging and removing said trailing socket.

I discovered that by reversing out, with the socket still under the bonnet and still plugged in, that 1.5mm2 3 core cable doesn't actually stretch. What is does is go "booooiiingggg" and a bare end falls onto the drive. Never mind, turn off the engine, remove the trickle charger and trailing socket, which really is trailing now, and take the bits back into the garage, unplugging the snapped cable from the socket in the garage.

I had to do a run around, to inflate the two front tyres and go to the supermarket, so I was gone for an hour or so. Then I looked at my mobile phone a notice a message to say that the house alarm was reporting a power failure. I wandered back home, in no rush, and when I got back I checked the downstairs fuseboard. Ha, so snapping plugged-in extension cables does actually trip the ELCB as well as the trip-switch for the socket where the extension cable was plugged in !!

This particular event is really not a recommended course of action as all the sockets connected through the ELCB seem to lose power, and become pwer-less !! This is not what the power sockets are designed for. They are designed to plug things into them, and those things can then be used to do stuff. I now know that without any power you can't do stuff ! Unless you have a push lawnmower.

ELCB or RCD will trip if Neutral and Earth are connected. Not sure if you have the same in Ireland as in the UK where the trips on each circuit only cut the live supply or if you use the European system where they break both live and neutral. With the UK system you can switch off a circuit to do some work but still trip out the whole house by earthing the Neutral as they are both still connected. Great fun if you are working on a consumer unit in a cupboard under the stairs and you turn all the lights off.....

Yes, I know all about ELCB, RCD, MCB's etc. etc. I used to install fuse boards and power systems as part of my job, before retiring.

At least you didn't manage to do this, which occoured on a site I was on a couple of weeks ago (not my doing either!)

That cable was feeding a secondary fusebox, the damage was done by an electrician from the other side of the wall when he was trying to get a cable through the wall. Apprentice who was given the job to do under supervision got the blame for it from his supervisor as well.

Then as if that wasn't bad enough, in his efforts to repair the cable, he somehow cut his hand getting blood all over the carpet in the process.

I think you could say it wasn't his day!

Richard - RCBO's are available in the UK, but cost around 10 times the equivilent MCB so are rarely used. I put one in on a couple of sockets in the workshop after discovering that the sockets in question were only on an MCB, not even protected via an RCD. This was discovered when an extension cable managed to get chopped through by a falling bit of concrete when we had the floor redone and nothing tripped out at all. Further investiation of the consumer unit showed up some "interesting" wiring ideas which have now been removed (like said trailing socket mentioned earlier wired into one of the MCBs in the next area etc).

Years ago I was working in a factory and, similar to your picture Brian, an electricial was drilling through a concrete floor to pull in new data cables when everything went dark. He was drilling through with a core drill bit and cut straight through some lighting cables.

The rather stupid thing was that the concrete floor was a pre-cast with round holes, about 1 foot in circumference, for lightness, and a previous electrician had decided to save a few pounds by using the holes to run lighting cables from on side of the floor to the other so that he didn't have to install metal trunking !!!

When I worked for BT many, many years ago there was an installer called Eric who was well known as a walking disaster area. His job was to install and connect phones in houses. One woman said she wanted a wall phone rather than the normal desk phone and pointed to where she wanted it. Eric bent down and plugged his power drill into a convenient socket and started drilling the mounting holes for the phone bracket directly above the mains socket. One big bang later he realised he'd drilled through the capping and the mains cable buried in the wall feeding the power point he'd just plugged his drill into. He was the same guy that cut off the heating to a whole street too. A new estate had a district heating system, a boiler house on the edge of the estate, feeding hot water to every house on the estate. Eric was drilling a hole in a partition wall to run a cable in when the wall around the hole started to change colour. He realised something wasn't quite right so stopped drilling and pulled the drill out of the hole for it to be followed by a jet of scalding hot water. He'd drilled through a central heating pipe running inside the partition wall. Unfortunately, nobody had thought to install a means of shutting off the supply to individual houses, so the whole street had to be shut off and the partition wall cut open to repair the holed pipe.......