Filled up with a full tank of petrol & was very disappointed to discover that fuel consumption over the last 500+ miles had been barely over 12mpg. Surprised as I had even on impulse treated it to a bottle of STP snake oil during that time & it seemed to be running well & revving freely. Then I remembered that I had topped up with 2 x 30L since I last rest the trip odometer not the 2 x 60L that I had used in my calculations. Happily it's been doing a healthy 18.11mpg.😀

Yesterday afternoon in preparation for travelling back to the UK from our place in France I checked the oil level & tyre pressures then thought I would have a go at trying to sort out the airlock in the cooling system that I think is the cause of intermittent heater problems. It seems to start off OK but after 45-60 minutes of driving the air blowing into the cabin gets cooler & cooler till eventually it's just external air temperature. As per RAVE instructions on refilling I disconnected the radiator bleed hose at the radiator then lifted the host to my lips to blow & clear any residual coolant whereupon the hose snapped in two places. The 20 year old plastic tubing was presumably flexible when new but is now the consistency of dried pasta so easily shattered.

An initial attempt at repair served simply to prove that gaffer tape does not provide a water tight seal & would not take pressure in any case. There was some urgency to effecting a repair as we planned on leaving the cottage at about 07:30 the next morning to catch the ferry at Saint-Malo approx 120km & 1 hour 20 minutes drive away. Remembering also that it's a Sunday afternoon in France & no DIY or motoring spares place or indeed anywhere else is open.

My initial thought was just to clamp off the outlet from the radiator in some way but before deciding on that I decided to Phone a Friend & ask for advice. @Gilbertd who himself was driving through France but hundreds of kms away advised me that this was a bad idea. If I had thought it through better I would have realised that the whole point of the bleed hose is to vent air trapped at the top of the radiator. He called me back a little later to suggest that if I had some reinforced hosepipe & the necessary fixings that I might be able to secure the hosepipe over the short rubber hose connectors at the radiator end & expansion tank end. I improved on that suggestion by using a 1 inch stub of the pasta-like plastic tubing to stop the rubber hose collapsing. I had bough 50m of reinforced hosepipe during the summer which was about 30m more than is needed in our garden so I had plenty of spare to cut a length from. My neighbour had one jubilee clip of the correct size & I was able to repurpose a plastic fixing that had held a water bottle holder on a bicycle to fix the other end. I tightened up the fixings tight enough to make a seal but not too tight so as to shatter the inner tube & collapse the rubber hose.

I allowed the engine to idle with the cap of the expansion off while intermittently topping up with coolant. Once the engine got almost up to normal running temperature & there was no more space for adding coolant I screwed the cap on tight. The hose didn't bulge excessively nor did it leak. I drove off to our local garage to fill up with fuel (see my previous post) a round trip of about 15kms. On my return the heater was working well & the hosepipe while flexible was not too swollen & the system was up to pressure as evidenced by the almost incompressible top hose on the radiator & the hissing as I gently released the cap on the expansion cap a fraction.

This morning we drove off in the dark & while I anxiously kept an eye on the coolant temperature for overheating & the bonnet for any signs of steam we covered the 120kms in good time. The heater worked fine for the entire journey. I am now sat in our cabin on the ferry while we make the crossing to Portsmouth. I had a look under the bonnet prior to boarding & the hosepipe looked OK so fingers crossed it all holds together for the second half of our journey of 3 hours & 150 miles from Portsmouth to North Essex. I've got a few meters of spare hosepipe in the boot just in case & have a 5L container of water.

I will update this this post in the evening.

We arrived back yesterday evening without incident.

Technically the other day... but I thought it was about time it got some custom badging to better reflect what is hiding under the bonnet :) 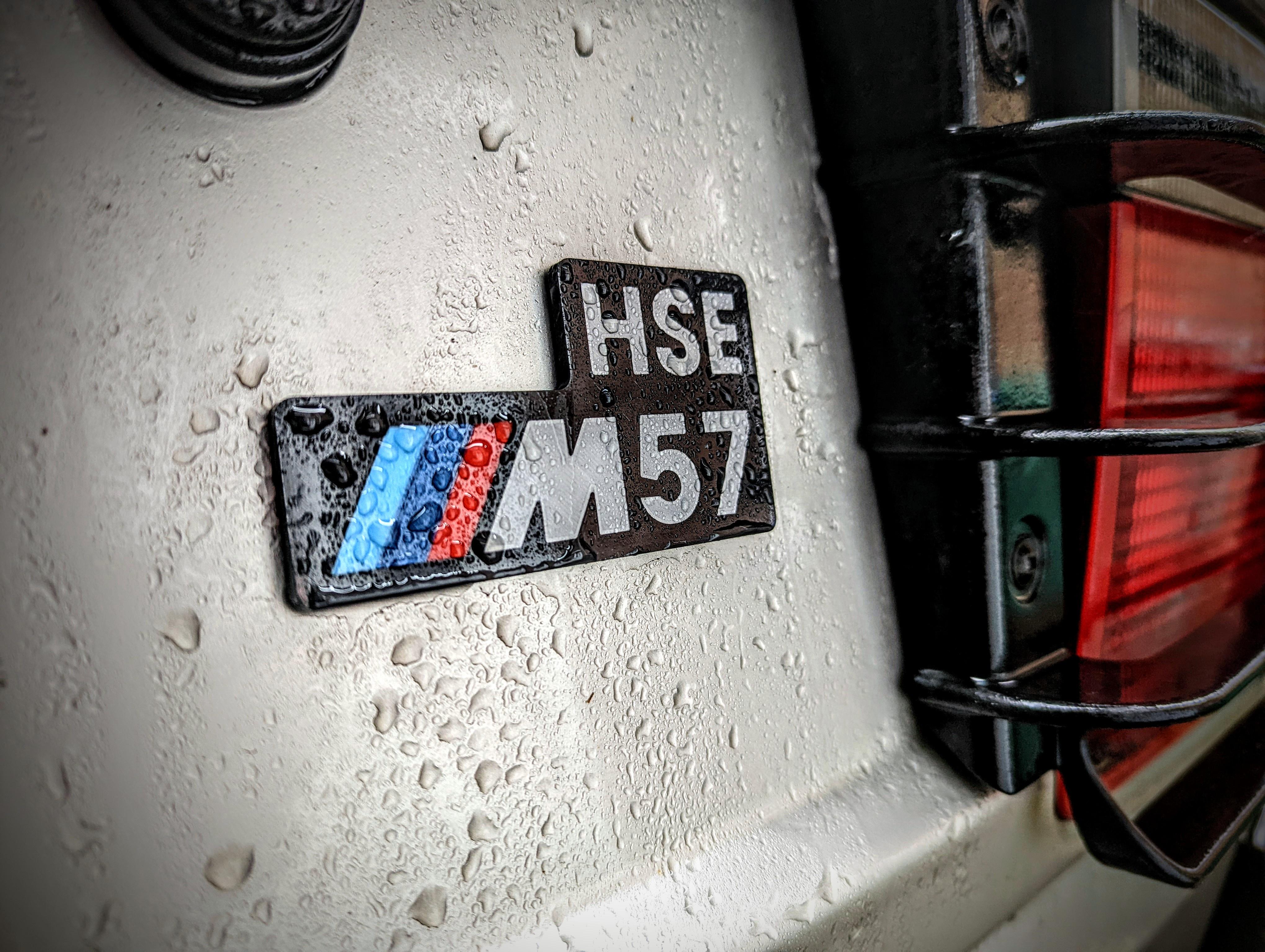 Not just today but finished it today and not exactly mine but the Ascot. It had some old and well dodgy tyres on the front, a pair of Goodyears, one dated 2007 and one without a date. The steering never has felt particularly precise and it had a habit of wandering about on bumpy roads. I'd put this down to the tyres being well past their use by date. Anyway, one of them went down while it was parked up so I put my electric pump on it. Managed to achieve 20 psi and a bulge appeared in the sidewall and the air was all falling out again. So, a pair of new, well part worn but only a couple of years old, tyres were fitted. I expected this to improve the steering but it actually had the opposite effect and it required quite a bit of concentration to keep it in a straight line.

So a bit more investigation was needed. With me under the front and Dina rocking the steering there was no slack in any of the steering ball joints. What there was though was movement in the panhard rod bushes so the axle was actually moving from side to side relative to the body. That would explain it then. Ordered some new bushes and bunged them in the freezer and took the panhard rod off. The old bushes were really soft and perished nicely but no matter how hard I tried with a couple of sockets and a big hammer, there was no way they were coming out. So bunged it in the boot of mine and went to see a mate with a workshop equipped with a 20 tonne hydraulic press. They were tight and took over 8 tonnes on them before starting to move with an almighty crack. Old ones out, cleaned up the hole and the new, still freezing, bushes pushed in no problem at all.

That was yesterday and as it was both dark and cold by the time I got home left refitting it until today. What a difference it made! Near me there a a bit of road that used to be the A1 until they built a new 6 lane A1(M) running parallel with it. As it only gets used for local traffic, it isn't in the best of condition but I was able to drive along there at a steady 70 mph without it feeling like it was going to throw me into the nearest ditch if I hit a bump.

Just got to sort out the permanent ABS and Traction failure, the HEVAC with the book showing and probably a few more things I'll notice after I've done them.......

One way of getting bushes out is to thread a junior hacksaw blade through the hole, fit the blade back to the handle and cut slots in the bush.
I have done it a few times, but only on smaller bushes.

I've done that with larger ones too but when there's a hydraulic press available......