Got my rear washer working. Blasted the pipes through with an air line and nothing came out except on the little short section in the upper tailgate. So replaced that. Not sure how long it will keep working but it is at the moment.

For no particular reason, I've wanted some plug-in jump leads to live with my P38, so I've finally gotten around to sorting some.

I didn't want the vehicle socket to have any flex or dodgy bumper mounting going on... so I took the crush can off, and welded up my own bracket to it. Can confirm - does not flex. The socket is also wired through an 800amp rated solenoid, which is switched via my custom ash tray panel. So it is normally off - preventing any possible shorting in a front end collision, or some delightful oxygen thieve poking things in it. 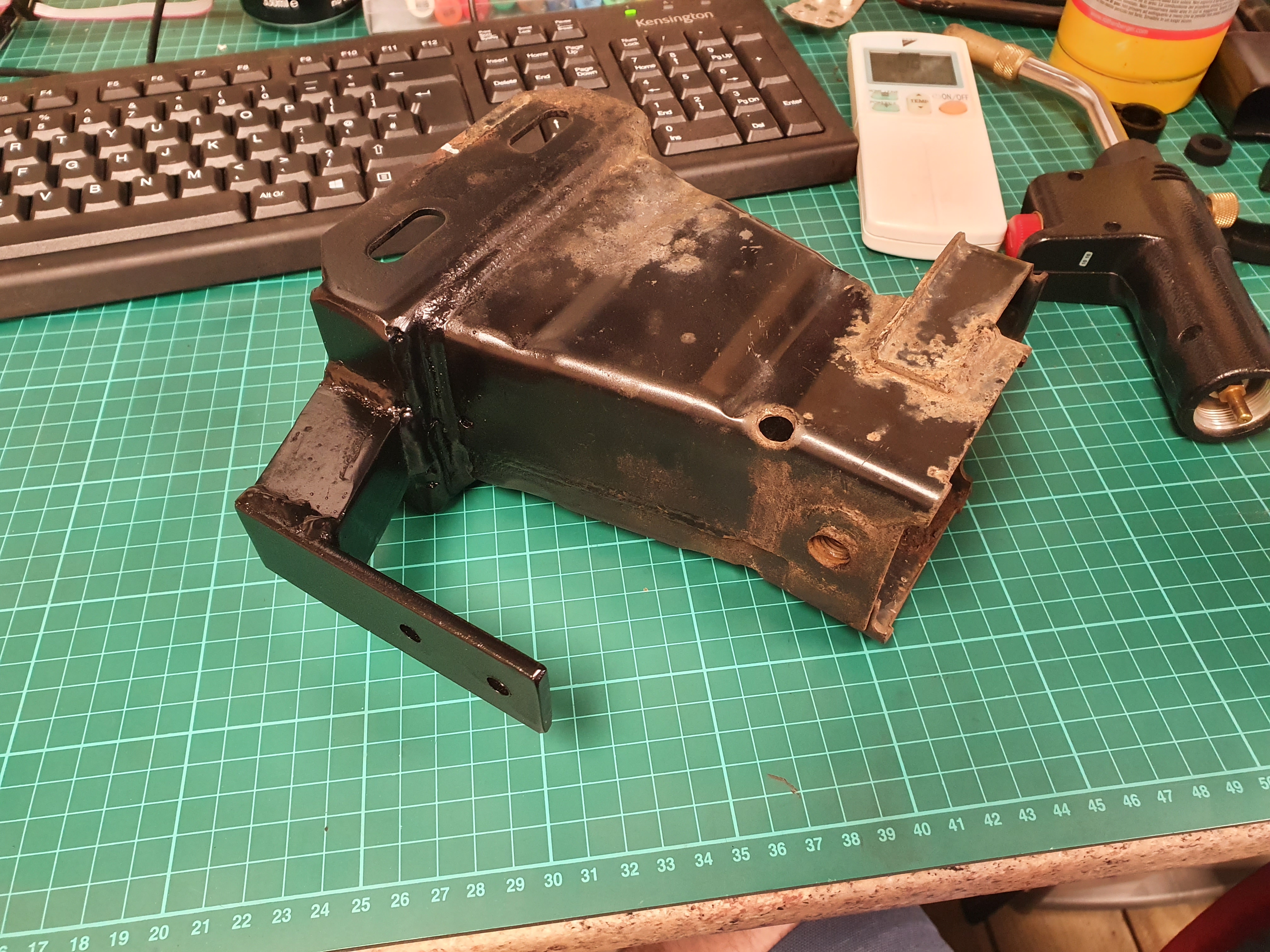 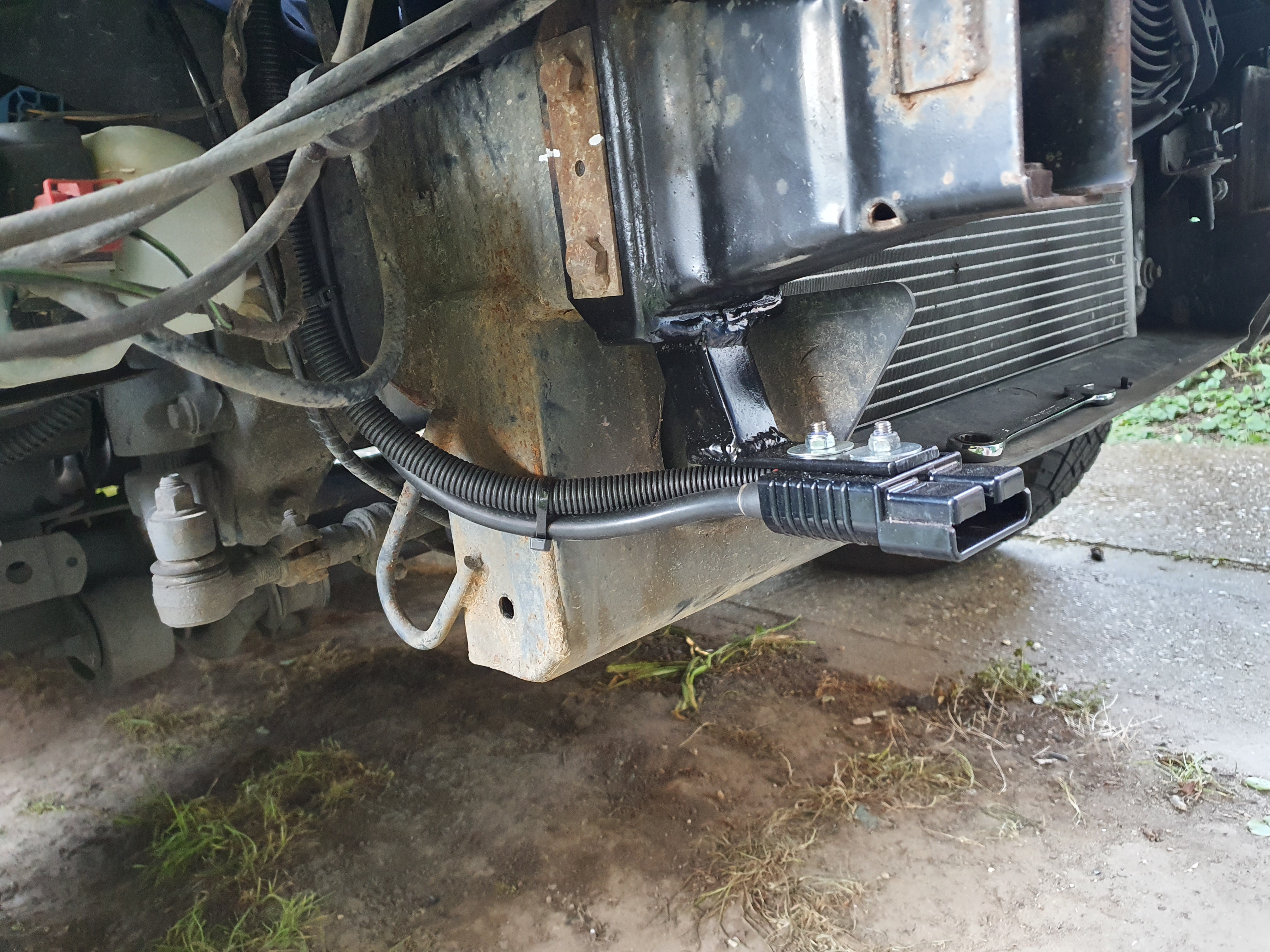 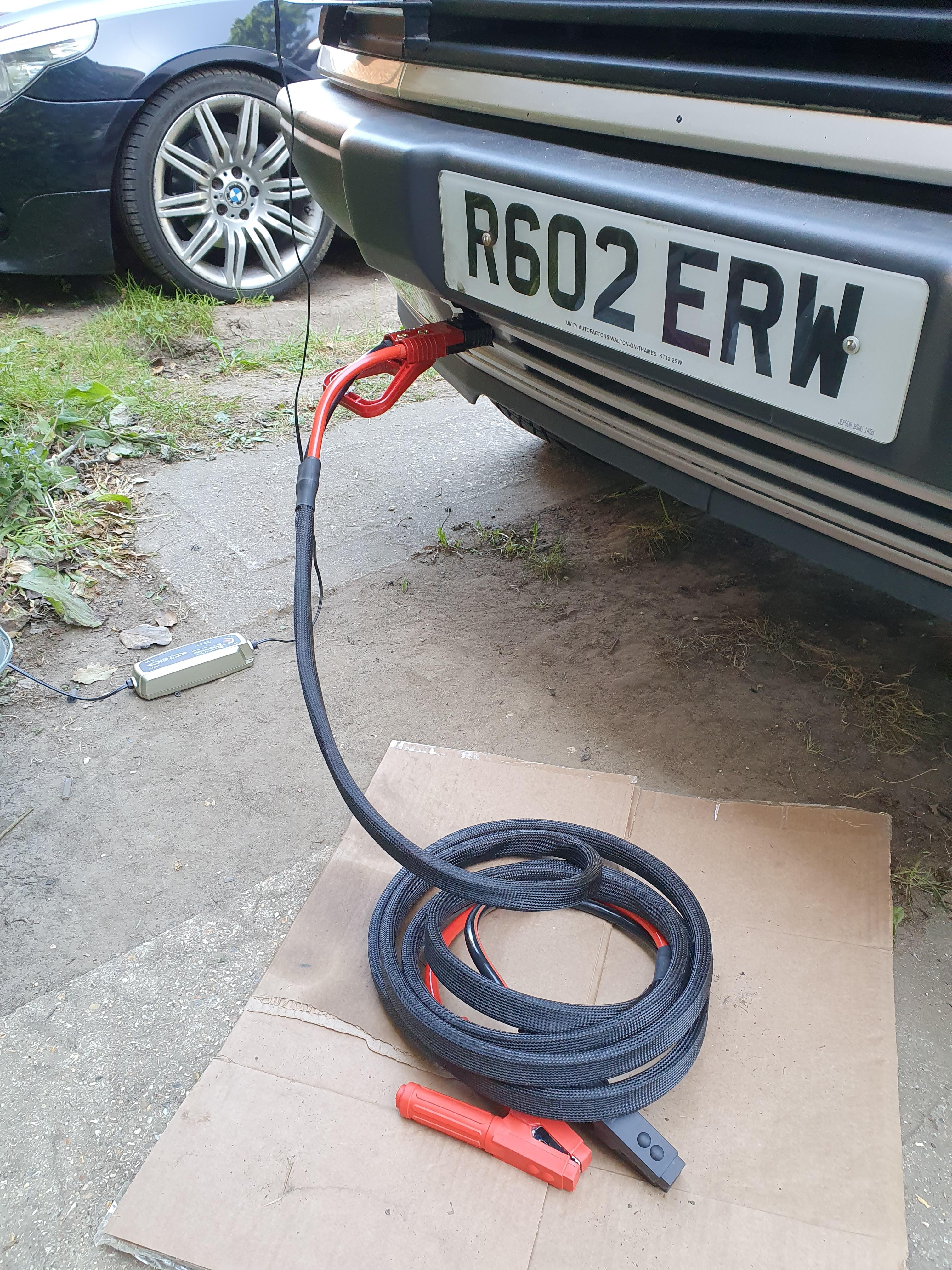 The vehicle side socket is a black SB175 - these will mate with any other colour SB175, which is handy. The stickout is a bit more than I'd have liked, but it was hard to gauge where it would sit. I could easily re-make the bracket to recess it a bit if I decide to in the future. Once the nudge bar is on, it might actually be easier to use as it is.

huh, a friend of mine has a similar setup on the front of his Disco3. He has it hidden (ish) in the grill. I'm not sure whether it's for jumping the disco or powering equipment (he has a generator hire business).

Drove to Screwfix and noticed the village East European hand car wash is open, so dived in there and got it cleaned. With the windows cleaned on the outside noticed the dog nose prints on the inside so got home and cleaned the insides of the windows too. Then, in a fit of sun induced madness, pinched a can of Vanish carpet and upholstery cleaner from the kitchen cupboard and cleaned my (cloth) seats too.

I had a re-gas from KwikFlit. £59 and it's nice and cold again. To be fair, it wasn't bad but there's no point in having a comfy car if it isn't comfy.

As an anti-Covid19 measure they have turned off their coffee machines, which seems a strange thing to do. I wandered round York for the hour and a half with my dog, which was very pleasant. Then I had to wander around for another 20 minutes while they recharged their gas machine because apparently it only holds 900ml at a time and the P38 holds 1400. It didn't cost any extra, so I had an iced Latte from the Starbucks next door.

Had my car aircon fully gassed today which is the first time it has worked since having it.
Cost me a condenser, dryer, tristate switch, binary switch and a used pipe from pump to condenser.

It was pumping out air at 6.5 deg c within a minute of starting. Well happy.

Did the Drag link today, along with a set of poly bushes..

Took it for a spin around the block and it rewarded me with the sunroof seal peeling off!!

Some rubber glue saw it good! 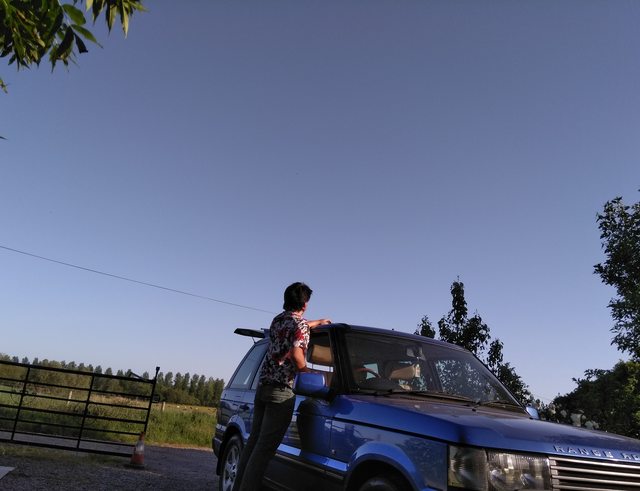 The Blue ones are comfort biased..

The old ones hadn't fared too well.. 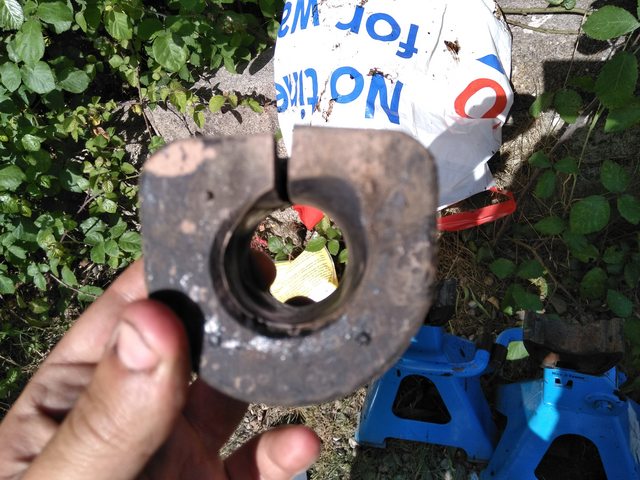 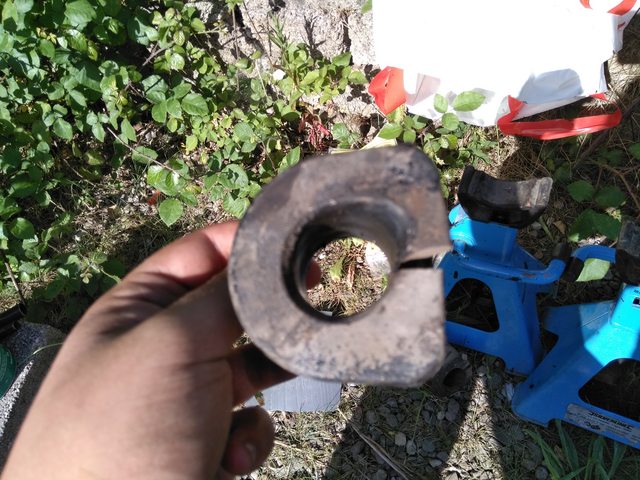 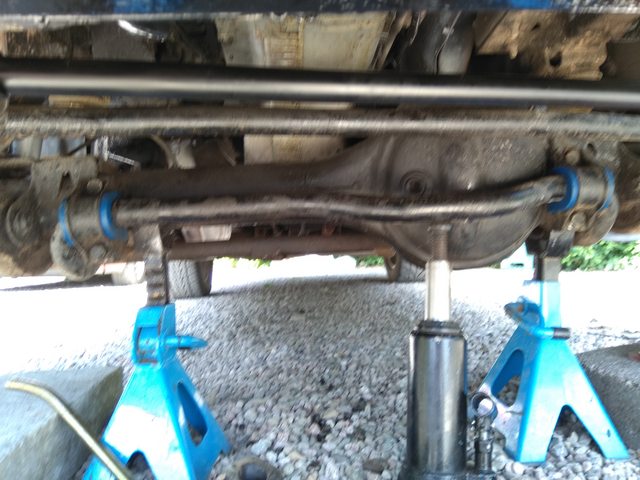 The new ones haven't made any detrimental effects to the ride, as far as i can tell...

Although if it is only the ARB bushes you've replaced then they may last a bit longer.

Wow few days I could not pass by the pub and you guys have made a lot of work - and talk!
And I though this was a lazy forum ... can't keep the pace lol!

Me ... ah, I've manage to send my BeCM window switchgear and fobs to the Maestro to look at.

And I've found this online this in case someone had not seen it and thinks is interesting
https://drive-my.com/en/history/1945-25th-anniversary-range-rover-p38.html?start=12

some details are not really accurate, but is a minor issue :-)

Old was was dead upon removal of the old drag link.. 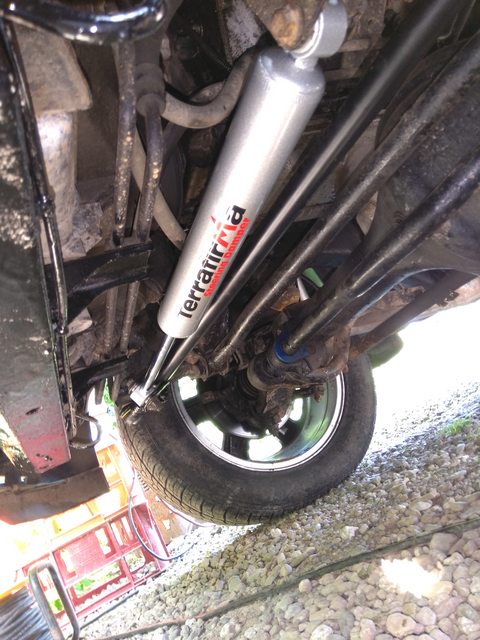 Good call, I did that couple years ago and it was a good improvement!

Dropped her off at the local Garage to have the backboxes replaced. Hopefully this will all be under warranty as the claim was made well in time but then lockdown hit and we're past it now.
Still, the "Hairy Exhaust" jokes were wearing thin so I'll be glad to get it done. 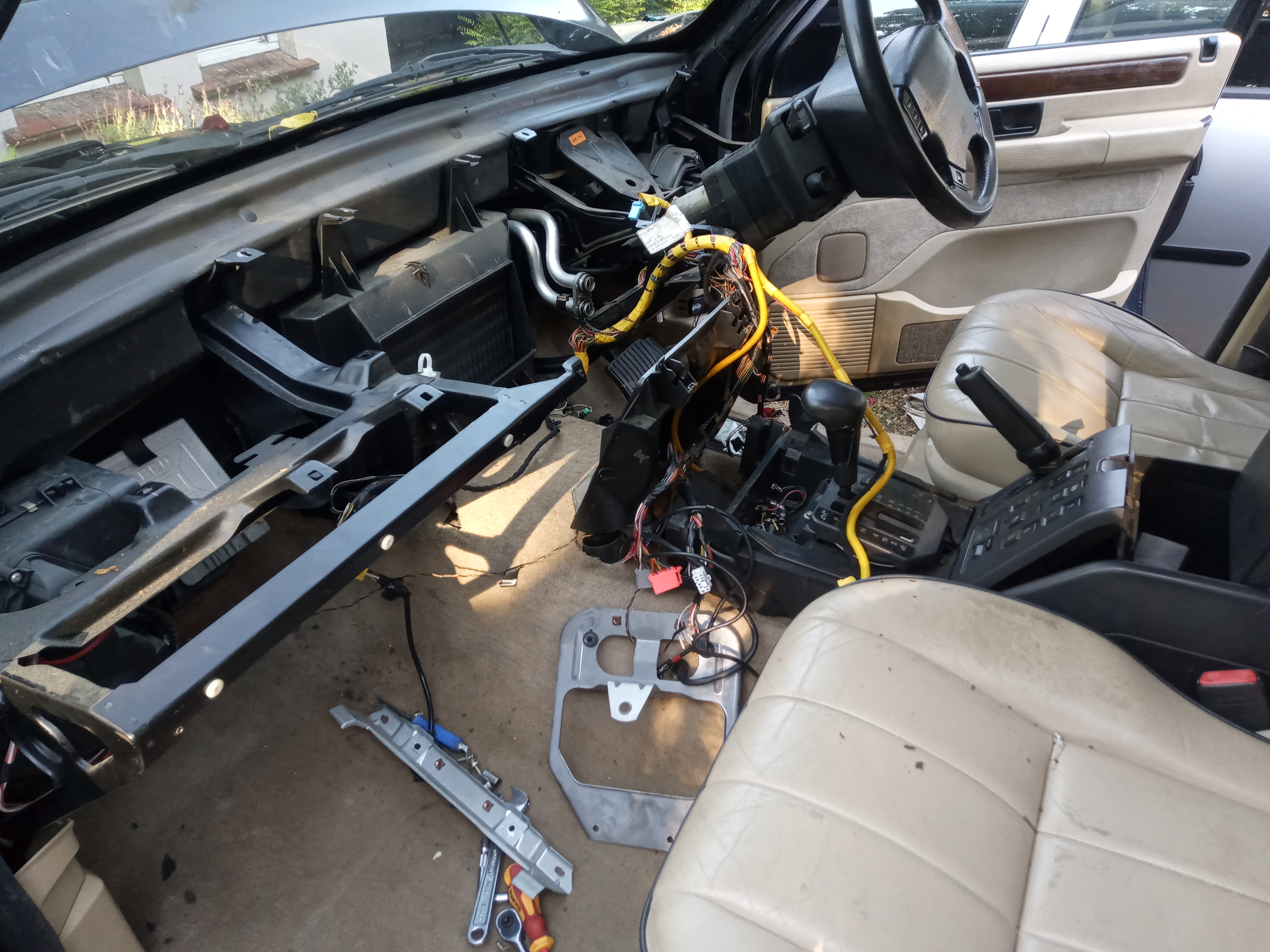 Not scrapping it, just doing the heater. Core decided to leak.

Are you going OEM or Audi?

Are you going OEM or Audi?

OEM - thought I'd give it a shot. Took the old one out and I think it's a Britpart or similar. I did seriously think about the Audi route. I have a blend motor I (think) I repaired earlier, so it might all come out again at some point anyway if it's on the fritz after a bit. It's an odd heater, there's an added/replacement sensor that vanishes off to the left on those brown hanging wires by the transmission tunnel above that black cable which is actually my replacement OBD port (covered with parts). The O-ring connector's screw is not at all right looks like a self tapper (screwed an M5 in and out just to check the thread's still OK), or did It's the only screw i know I've lost so far - oddly they weren't leaking (well, yet see how my new ones fair). The core went from a drip or two a day to (with less use lately so presumably building up in the boxing and not blowing out the heater as usual) a puddle a day. It's corroded as, surprised it's not gone pop. Been replacing hoses round the engine as well as they were old. Not a boring day tbh.

Fob codes were wrong, there was a fault on the power board - the batter cover wasn't quite all the way on on one of the fobs and I don't think one of the battery connections was quite being made either - so now both fobs work... oh, and there's a refurbished switchpack in the box, and my old PAC SWI-RC unit for you to play with for steering wheel controls on your aftermarket head unit...

All I've done to mine is drive it... I've sleeved my jumper cables with braiding too, to tidy them up a bit as I liked the look of Sloth's. I've also got a box of bits in the garage to fit... Terrafirma shocks all round, and new front air springs. I was going to look at doing them today but it's started raining, so think I'll probably crack on with some other bits inside... like building RF filters, and looking at another BECM that arrived on Friday.

Last week, whilst sorting out a list of P38 bits and pieces with a local mate, mentioned the knackered front and rear bumpers.

A day later get an SMS from another pal saying he knows who is flogging a pair. That would be Friday.

So, Sunday saw me and number one daughter doing the longest trip either of us have managed since March 17. A whole 30km round trip!

Need to get the front painted in the correct colour (if I can ever find anyone to mix an aerosol for me) and get 'em fitted.

Cheap too, so happy boy!