Nabbed a nice Janspeed Exhaust for the old girl!

Today, we've gone from this...

Went on a treat as well. Lifted up, pushed and everything lined up lovely.

So that's front and rear bumpers done, new rear light lenses on, so she's looking tidy outside. At least until the next sidecar hits it.

Time to start on the inside now.

What product and paint type did you use? Is it satin black or flat black, etc. I need to do both of mine and that color looks great.

I suppose it depends on what you can get wherever you are. I doubt George gets the same stuff in the Philippines as we get here or you will get there. If you use normal satin or matt black it will flake off as it doesn't usually have a plasticiser in it to make it flexible so isn't ideal on plastic. I use a can of stuff sold as black bumper paint which is a satin black but made to be sprayed onto plastic bumpers. I also took all the side rubbing strips off and used it on them too. This https://www.amazon.co.uk/Hycote-Bumper-Vinyl-Paint-Black/dp/B005NGZYJI/ is what I use but as I say, you may not be able to get it in your location

This https://www.amazon.co.uk/Hycote-Bumper-Vinyl-Paint-Black/dp/B005NGZYJI/ is what I use but as I say, you may not be able to get it in your location

For sure and I know I've asked about this before. The Hycote Bumper Vinyl on your white P38 certainly looks right as does GeorgeB's. I've got the product most people use here, as well as the prep products. I just don't want it to look stupid and I can't fix it later. I should probably just do it and get it over with. haha

The only prep I did was wipe a rag soaked in paint thinners over the surface just before spraying the paint on.

have you got that engine out yet?

My 5w50 oil has arrived :) Hopefully I'll get a change done this weekend.
For some reason it was only £27.49 for 5L on Amazon for the Comma stuff so I got two. I like Comma oils and this is one with plenty of Zinc for flat tappets.

My 5w50 oil has arrived :) Hopefully I'll get a change done this weekend.
For some reason it was only £27.49 for 5L on Amazon for the Comma stuff so I got two. I like Comma oils and this is one with plenty of Zinc for flat tappets.

183, according to the doc in the link.
Which is quite pleasing compared to Castrol Edge Supercar 5w50 (boosted with TITANIUM no less!) which has a VI of 170 and costs £48.95 for four litres from Opie Oils but is out of stock.

Castrol Edge Supercar 5w50 (boosted with TITANIUM no less!) which has a VI of 170 and costs £48.95 for four litres from Opie Oils but is out of stock.

They certainly rip you guys off for oil! The same stuff here is the equivalent of 35 quid for 6 litres.

We get ripped off for most things. £1.25 a litre for petrol being the main reason why so many of us run on LPG as it's half that.

Well, the oil is in - and a new filter. This time I have a Mann (which I like) instead of what turned out to be a Wix, which I don't remember buying.

I also tried to fix the Cruise Control by sorting out the vacuum lines at the usual T piece, but it didn't work despite looking like they're all sealed properly now :(

A bit late in replying.

Richard is quite right. I couldn't find the proper stuff, so it's just got a waft of satin black and we'll have to see how it gets on.

It wasn't that the plastic was faded, it was the fact that the colour coded section around the spots wasn't Epsom Green, and there was no chance of getting any made up any time soon. So it was satin or nowt.

Better than looking at a gaffer taped hole any day!

Not today but Thursday evening and Friday morning. Changed the steering box on the ex-plod so another bit that is no longer original. About 3 years ago I bought a Eurospares lower steering shaft due to a bit of play at straight ahead. Then adjusted the steering box and found that I didn't actually need it so it sat on the shelf waiting for when I did. As a lockdown something to do I fitted it but had a hell of a job getting the original one off and resorted to using a tapered ball joint splitter between the steering box and the bottom UJ. Rather than the steering being more precise than before, and it's always been more precise than the Ascot and others I've driven, it seemed worse. Carefully checking and found a tiny amount of play in the lower UJ so ordered a replacement OE lower steering shaft. Fitted that a couple of weeks ago and it still wasn't right. Checked it again and found play in the steering box itself. Couldn't adjust it out and I suspect I'd damaged it in some way when getting the old UJ off, so it was replacement steering box time.

A phone call to Dave at East Coast 4x4 and he was in the process of stripping a 104k GEMS that had come in for breaking so I went there and picked that up. Decided to start the job Thursday evening when it was a bit cooler which also meant I should be able to finish it Friday morning before it got too hot as the weather man was forecasting 35 degrees. RAVE says to remove the inner wheelarch liner and washer reservoir but I remember Chris saying somewhere that he had done it with just removing the liner. If he can do it, so can I. Well, nearly. RAVE also doesn't mention the fact that, on a GEMS anyway, there's a steel coolant pipe that runs right over the top preventing access to the banjo bolts with a socket. So that had to be unbolted so I could move it out of the way but in my case the bolts for that were under a bracket fitted there by plod to mount the split charge relay and additional fuses for the extras they fitted. So more bits had to come off. By Thursday evening everything was disconnected and all that needed doing was to undo the 4 bolts that hold the box on and drop it out.

Nice and early (well, early for me), Friday morning saw the 4 bolts removed and the steering box was no longer attached but would it come out? Would it hell! The washer reservoir needed to move forward by about half an inch and the bracket for the brake hose and ABS sensor cable were stopping it too. Bracket was easy enough to unbolt but the reservoir put up a bit of a fight. It is held in place by two bolts and sits in a channel to support the weight. Undoing the inner bolt would be enough to allow it to move so that came out and with a bit of persuasion I was able to push it forward in the channel and get the steering box out. New one went in, bolted it up and torqued to the required grunt (don't really want a floppy steering box), centralised the box and steering column and reconnected the steering shaft. Poured fluid down both holes in the steering box (so it shouldn't need bleeding) before connecting the pipes with new copper washers and torqued the banjo bolts. Reconnected the drag link, bolted everything else that had been unbolted and took it out to try it. The steering is beautiful, precise and light, but although the steering column and steering box are centralised, the steering wheel is now on the piss, so the drag link needs to be adjusted. Slacken off the clamps, wire brush and Plus Gas on the threads and out with a big pair of Stilsons. Would it move? Would it hell. However, also noticed that the boot had split on the opposite end so will need changing so I just ordered a new drag link assembly and will put up with an on the piss steering wheel for a few days. Boot hadn't been split when I'd started on it so can only assume it had been put under strain and split while the drag link had been dangling while everything else was being done.

Anyway, shiny new bits will impress the MoT tester when the MoT comes up at the end of the month. Got a 4,000 mile round trip to do the first week of September and another 2,000 miler a couple of weeks later. All I need do now is put another 1,100 miles on it before the end of the month so I can take it in for MoT with an odo showing a number starting with a 4......

Ok, I'm not intimidated by Richard's heroics!
I changed the tailgate straps. They were almost unrecognisable lumps of rust but PlusGas rescued me once again. It took a while to work out what size the bolts were (10mm) but after tapping a socket on to the bolt, my small bar took them out without a murmur. The new ones are on with plenty of copper grease, let's see how they last.
The Britpart straps have a 11mm bolt head so you can tell if yours are originals.

I spent yesterday removing an exhaust which in theory is quite an easy task on the P38...

However some braindead mechanic had welded the rear muffler coupler to the intermediate pipes that go to the 2 rear mufflers!

So out with the angle grinder and it was cut off in several places which allowed the entire system to call off in small chunks, as i couldn't be arsed to remove the bolts or the mounts! 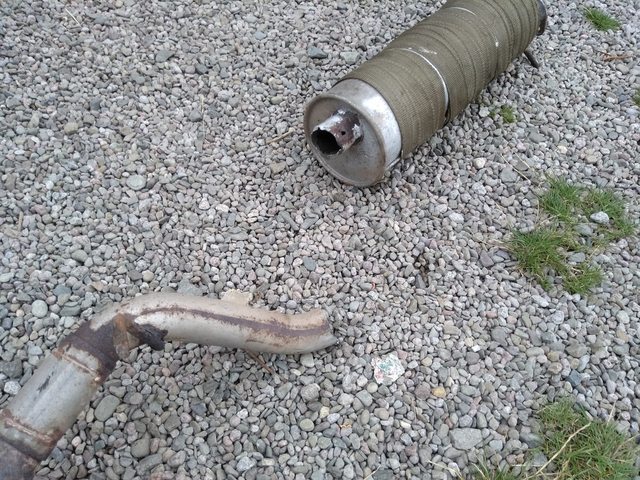 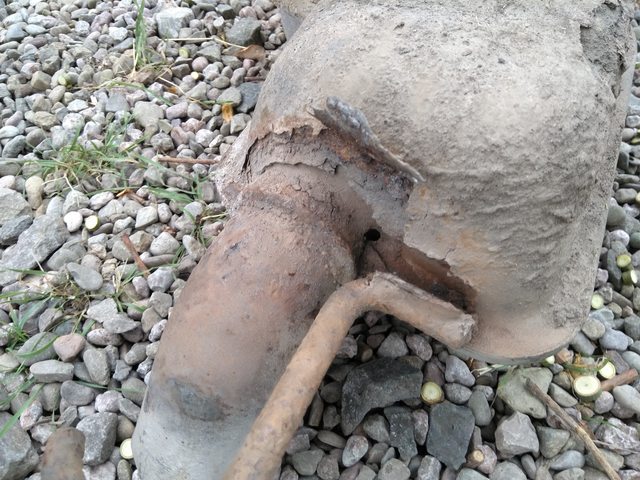 The rear pipes were being an arse to get out, so with one foot on the muffler and my hand on the other, a good yank so the rear pipes split in half.. 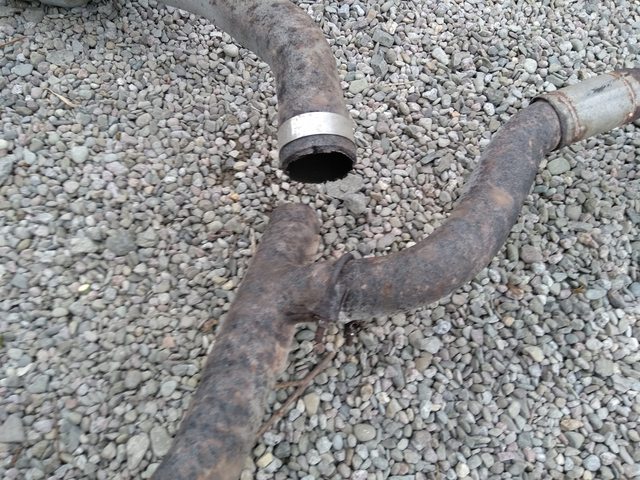 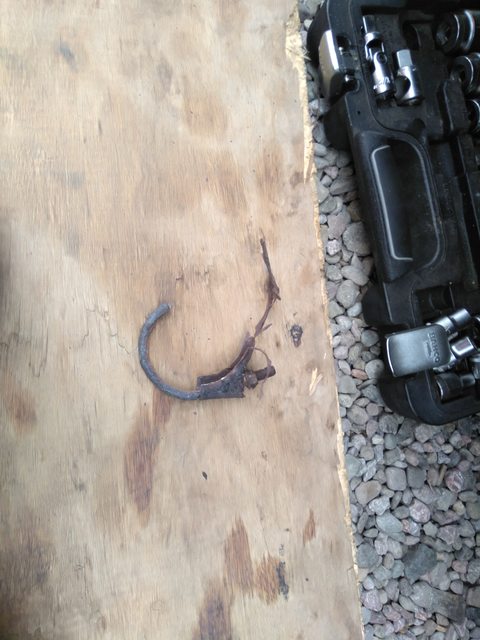 A Janspeed system will replace the original, for some more burble!!

I have sorned my p38, although I have been running it once a month on tickover.
Went out yesterday and battery completely flat. Put it on trickle charge overnight. Only 11.6v and 50 CCA.
Spent an hour today looking for the receipt. Bought in Sept 2018. 4 year guarantee from Eurobatt.
It is a Lucas MF31 which I think is a rebadged Hankook. It has been on charge for most of today. Still less than 12v but CCA up to 260.
Buggered I would say.