rangerovers.pub
The only place for a coil spring is up Zebedee's arse.
dave3d
Member
offline
396 posts
Fuse 9 keeps blowing in Electrickery
20 June 2019 - 14:56

Fuse 9 under the seat is 20A and controls "Front audio system amplifiers, front doors" according to the handbook.

It first blew a couple of weeks back. The door winders and fobs suddenly stopped working. I replaced it and it was OK for about a week. Now it repeatedly blows again and I have been unable to trace what is causing it. I fit a new fuse, turn the ignition on, and the window winders, locks and radio all work again. As soon as I start the engine, it blows. Is there anything else that runs through fuse 9?

My HEVAC central LCD panel is also currently off and I don't know if this is related. The switches light up ok but no display. I swapped the panel for another spare (but an early one) and it doesn't light up either. I swapped them back and tried unplugging relays under the bonnet related to HEVAC .... heater blowers, aircon clutch etc. Still blows.

Disconnected radio leads. Still blows. I have also added a few things to the wiring over the years ... a switch for the aircon fans (wired through a relay anyway) and a USB connection/Hella charging panel in the back. Disconnected all the leads. Still blows. Running low on 20A fuses, I fitted a 30A fuse. Still blows. Plugged in a diagnostic current measuring device that you plug into a fuse socket and it went off scale and blew the fuse in the device.

Turning the ignition on, everything seems fine. No short circuits. No blown fuses. Start the engine (diesel) and it blows with a pop. Any ideas?

Slowly working my way through a few electrical problems on the car. Blown fuses .... now fixed and found to be the door mirror wiring.

Next is Hevac LCD panel which is dead and then my DAB aerial showing a fault on my (Kenwood) radio.

The Hevac unit: Checked the bulbs. Centre one had blown so fitted another one. Put 12v on one of the other bulb holders and they all light up except the middle one behind the panel. Had a horrible thought later about polarity so I hope I haven't damaged anything.

Decided to do the mod to the panel connector while I was at it. Marty, who is away at the moment, kindly posted one on the way to the airport. Thanks Marty. I followed instructions and took it all apart on the bench, cleaned everything and put it back together. Back in the car, I used Faultmate to test the unit. Everthing checks out, controls, switches etc. Everthing works, however the display panel still won't light up. I shone a torch through the bulb holder and the panel is working. The display is really clear and much better than it was. No loss of pixels.

Problem is the bulb, which I tested as ok, does not light up when in the holder. Any ideas where to look? I have got a box of new bulbs on the way.
I tested the bulb holder contacts in the car to see if there was power on it and there doesn't appear to be. Could this be a component fault?
If I can't solve it I was thinking of soldering a couple of thin wires to another bulb holder and fitting an LED behind it.

I was caught out again this week by the BECM waking up when parked and flattening the battery. I guess I could solve the problem once and for all and go out and buy the mk3 receiver but it is very expensive. I have since removed the blue aerial lead again which I had foolishly replaced when refitting a trim panel in the back.
It would be a big help if there was an easier way to see if the BECM is asleep or awake. The led on the auto gear change panel is difficult to see from outside. I am thinking about fitting a more prominent indicator. Maybe a brighter led on the dash.
Where would be a good point to pick up the signal? I thought about the park led on the gear change panel. The circuits would have to be isolated, but how to do it? Need comments from Gilbertd and/or Marty I think.

I am recently down to one working keyfob so tempting fate. I have had a look at it as best I can, but the fault seems to be the microswitches on the circuit board.
I read a few comments about a guy on Ebay that does repairs. I have had a look and there are several advertising. Can anyone recommend one they have used?

Another lockdown job.
I am into 3d printing and having bought a new UV resin printer, I have revisited an old project.
I did the drawing for the 3 gears in the blend motors and produced the .stl files to print out the gears a while back.
I originally tried to print them using ABS filament on my old printer but the resolution for printing small parts was not good enough.
My new resin printer is far better for small parts. 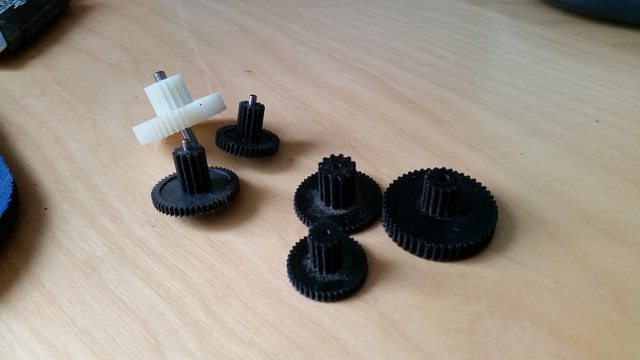 The genuine parts are on the left in the picture and my copies are on the right.
Not there yet, it needs a few more tweeks to match them more closely.
The resin is described as equivalent in strength to ABS.
I was going to use the shank of a suitable drill bit for the shaft.

Is there any interest in these parts? If so I will supply the files.
Constructive comments welcome.